A clever blend of pinball and exploratory platforming makes Yoku’s debut better than the sum of its parts.

Next to roguelikes, the term Metroidvania has been one of the most frequent buzzwords used for games in recent memory. The concept naturally came out of 2D platforming origins, but has since been applied to a wide variety of games. I’m relatively positive that Yoku’s Island Express is the first time the open-world exploratory concept has been mixed with pinball mechanics. The idea is novel and clever, made even better by the bouncy music and endearing graphics. Frustrating movement and some backtracking maladies unfortunately hold this charming game back from being incredible. Still, it’s an interesting experiment worth spending time with. 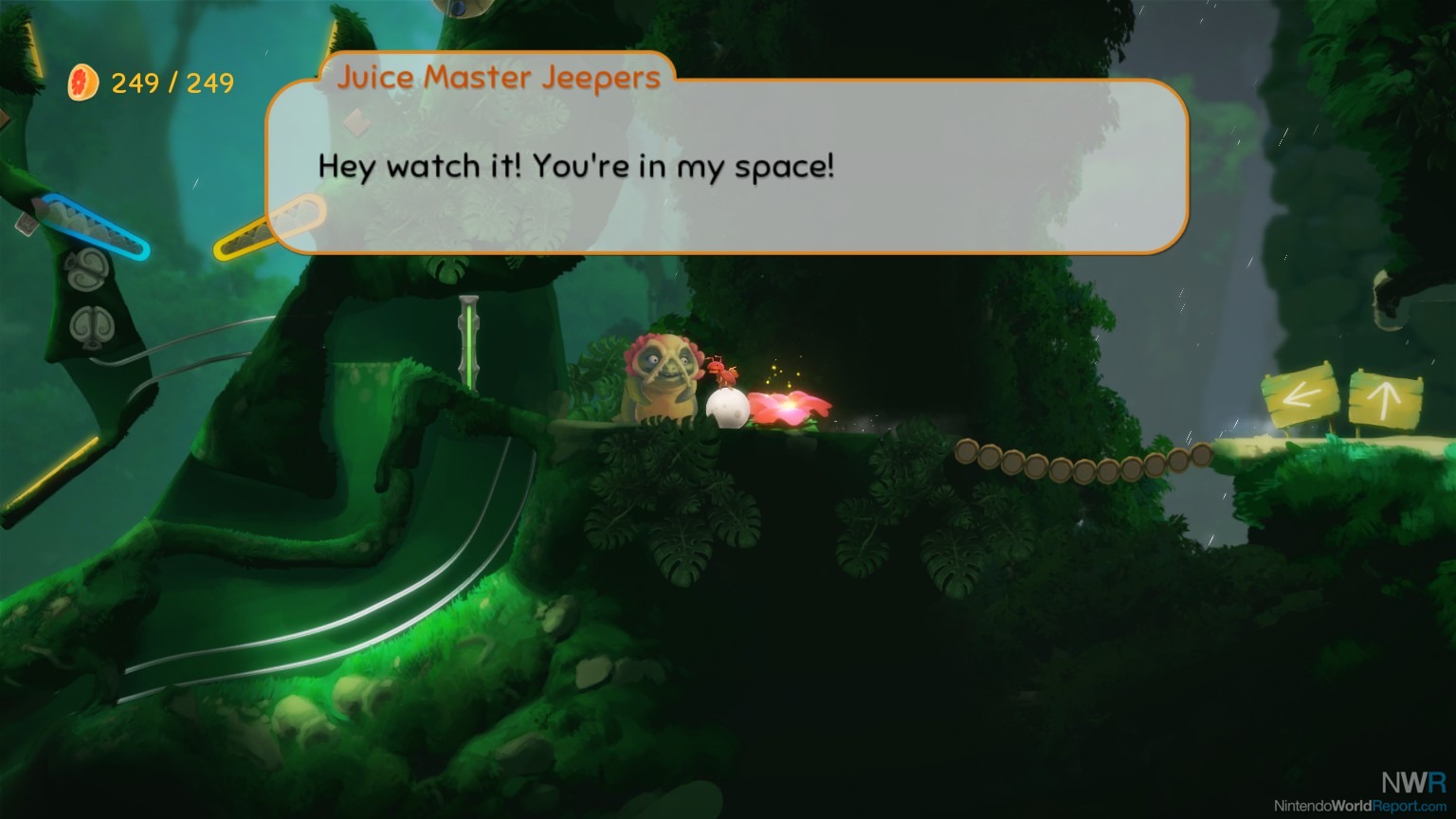 You control Yoku - a dung beetle new to Mokumana Island who is taking up the island title of postmaster. Some issues with ancient beings, warring tribes, and a fierce monster help complicate the little guy’s travels and before long the simple mailman gig turns into a full-blown world-saving adventure. The hook is that Yoku primarily moves around using pinball flippers built into the environment. He can move left and right, but he’s a tiny beetle rolling around a ball that I’m pretty sure is poop. He’s not moving far. To get anywhere in the game, using the environment’s flippers, hills, and valleys is integral.That’s where both the best and worst parts of the game come from.

Exploring the island is very fun, especially uncovering regions and stumbling upon new quests. Everything fits together in a weirdly natural way that highlights the beauty of the art design. The highest moments of Yoku’s Island Express happen when you’re just discovering new areas, solving fresh pinball puzzles, and chilling to the relaxing beats. Where it stumbles is when you backtrack and revisit areas. Some of that is because of an unclear quest system (which is supposed to be tweaked in a day-one patch), but most of it is because you frequently have to go through areas you already completed. Any puzzles you solved will be done, but it’s not quick to go through pinball areas to get around the island. In a game where the design is meant to invoke the great backtracking-heavy adventures of yore, making the act be slow and laborious kills a lot of the amusement and momentum. 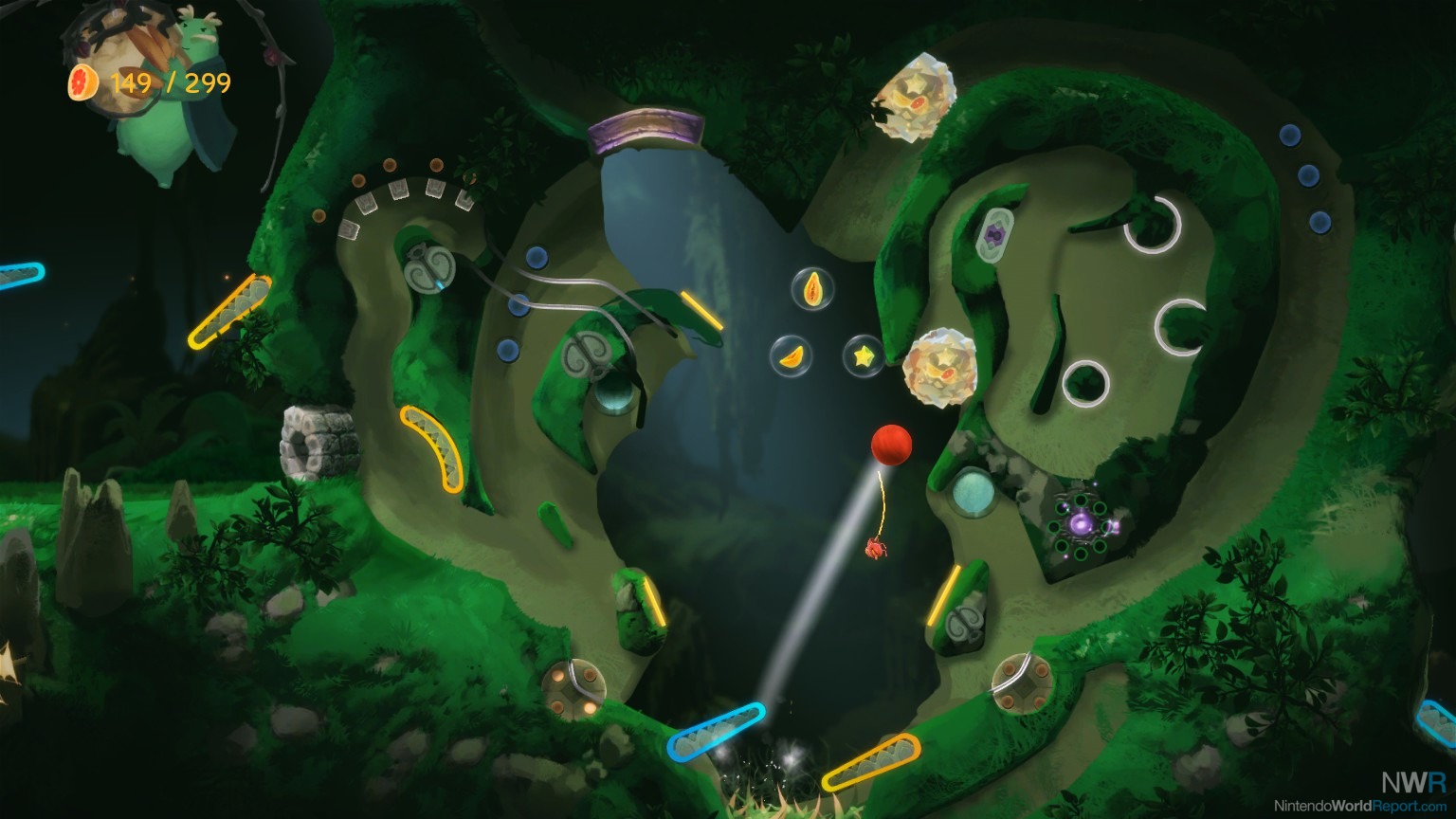 A traversal system can be found after the first third or so, but even still, it’s easy to get thrown off your path and furthermore, by the time you get access to the faster travel, you’ve probably already scoured the area. The pinball controls have a finickiness that works just as often as they don’t. You can go from enjoyable pinball table mayhem to getting stuck in a pit that takes too long to get out of or sends Yoku careening off a cliff to unbridled frustration. As is expected of the genre, you earn different abilities throughout the game and they serve as keys to unlock other areas or secrets. One of them is as simple as the ability to swim underwater while another is a sentient ball of soot that you can use to swing around from plant to plant. The sootling on a rope is off-putting in some ways, though, as the range to connect to plants is seemingly too narrow and it’s very easy to completely miss your mark and have to restart, thus filtering into the game’s recurring problems of making you painstakingly redo areas.

For the most part, though, the new abilities along the way don’t engage with the pinball all that much. A lot of the tricks of those challenges are shown early on and the late-game areas don’t iterate on the pinball as much as I’d like. It feels weirdly stale in the back half, likely because of the open-ended design.

Even with my issues and nitpicks, I enjoyed it overall. The writing is goofy and fun and I kept wanting to see the world unfold to see how the music would change and the art would be stylized. The discovery portion is excellent, from the cleverness of the pinball ideas to the unearthing of puzzles. It’s all dragged down by a general slowness, but the overall delightful vibe of the world makes all of that tolerable.

Yoku’s Island Express is an artful experiment, making a quirky 2D exploratory platformer out of pinball. It might falter in more ways than I hope, but the freshness of this concept helps make this a game worth checking out even if retraversing areas can be a chore and the pinball gets old. I wish I didn’t have as many problems with it because the idea is a breath of fresh air. That alone makes Yoku’s Island Express a thing to look into.

It has a little Metroid, a little LittleBigPlanet, and a little Guacamelee, but Yoku’s Island Express is all its own. The idea of a pinball-exploration-puzzle-platformer has a lot of potential, but in its efforts to fuse so many different genres together, what we’re left with is something that does not quite hit any of its marks.

Take the pinball part. As you, Yoku the postman, roll your ball around, your main means of traversal are pinball-style flippers and bumpers that help you get on ledges, beat challenges (that often take the form of pinball levels), and fight bosses. There was a certain unmistakable charm for the first hour as I zipped and bumped across the map, but the cracks begin to show soon after when I realized that there’s little control over how hard the ball is hit, which made attempting “small taps” nigh impossible (and eliminated a good deal of strategy—just hit the right part of the flipper and you’re good).

I found the level design to be lacking here. Most of the puzzles follow the same few rulesets, and the game is so easy and consequence-free that there wasn’t all that much strategy to beating the levels. Just “hit the bumpers until you win.” The boss fights, which should have been a highlight, were so effortless and forgettable that, even as I write this fresh after beating the game, I can immediately recall only two of them.

Moving on, the map makes for a perfectly serviceable -vania, and it offers plenty of sidequests and collectibles to find. That said, none of the collectibles or side-challenges really compelled me to stick around more than I needed to. The map never begged to be explored, likely because a vast majority of the game’s small-ish world is experienced over the game’s four-ish hour mainline path. It doesn’t help that most of the game’s environments boil down to not-so-interesting-looking caves and forests.

Yoku’s Island Express is far from bad. It has great ideas, a very good soundtrack, and competent gameplay. But while there’s not too much actively wrong with it, it doesn’t do anything exceptionally well either. It’ll do.