Dungeon Rushers barely runs on Switch. Menus take seconds to open, button presses take ages to register and enemy encounters can crash the game. Yet, Dungeon Rushers is a still a blast to play, if a bit mindless.

Young Elian longs for something more. He sets out to be an adventurer (a legitimate profession in this world), exploring dungeons and recruiting party members. His party soon uncovers the dirty deeds committed by the company running the dungeons and slowly works its way through the intricate system of mazes running through the world. Emphasis on “slowly.” 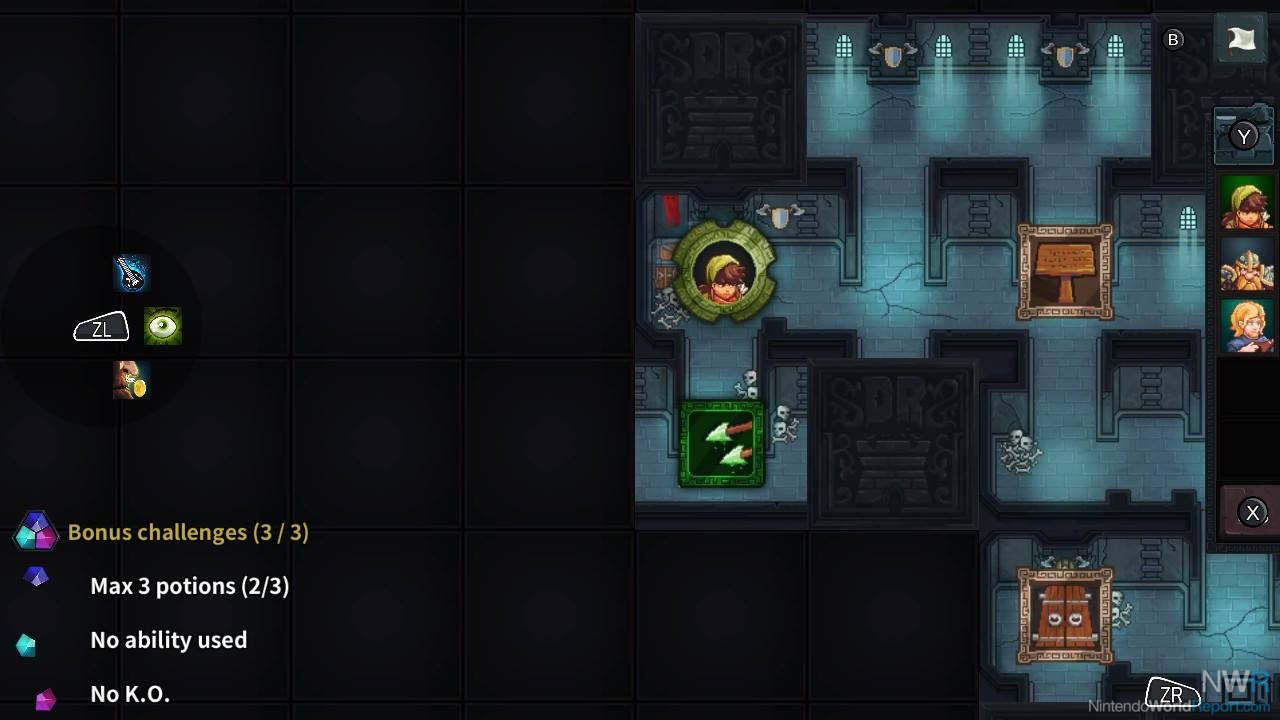 Each dungeon is a top-down maze full of monsters, traps, and treasures. Every step forward is almost painfully deliberate. Uncovering enemies or a trap triggers that event immediately, but party members can use field abilities to sing a lullaby before battle or dismantle a trap. Inspecting chests and statues throughout dungeons give buffs or debuffs seemingly at random, making them a gamble.

Battles are standard turn-based fare, but max HP is low for the surprisingly high attack damage. A single mistake can take out a party member or force the use of rare and expensive potions. The turn order at the top of the screen is your best friend, though it doesn’t make clear which of any same enemies are which. Each side has a front row and a back row. Enemies in the back row are often ranged attackers that can leave your party with status effects that last multiple battles. Strategically taking out the biggest threats before they can attack feels great. A few moves hit a row of enemies, but they are quite weak with unguaranteed secondary effects. Enemies are too often left with just a sliver of HP, urging players to go back and grind. 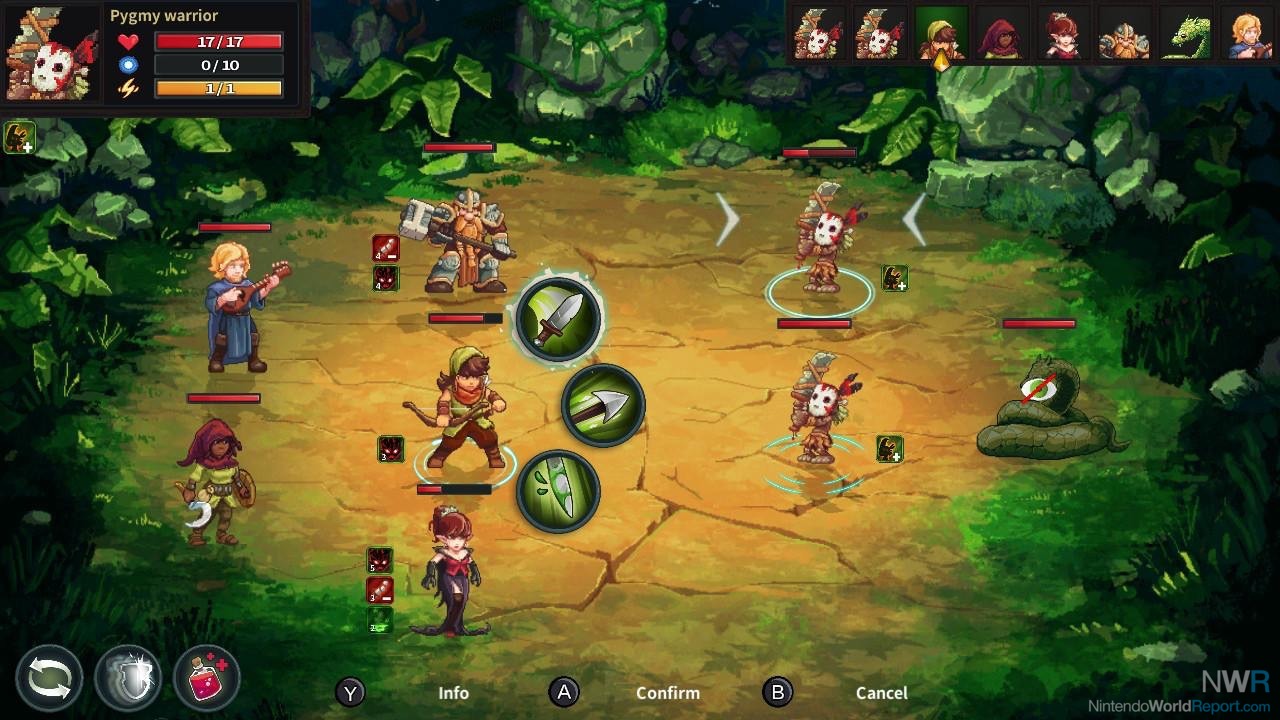 Grinding does have other benefits, though. Each dungeon has three optional achievements, like killing all the monsters or not using abilities. Completing all three unlocks that level’s “Heroic Mode,” which limits items and has stronger enemies and greater rewards. I found myself completing most quests along my journey, using Heroic Mode to level up as I got to tougher areas.

While the core gameplay is solid, the rest of the experience feels like an afterthought. The story is the same in each area: Elian kills everyone in every dungeon, then meets a new party member who is sad the company took over their dungeon. At first, I was put off by the cheeky writing, but dialogue is sparse and unimportant enough to keep from getting old. I do take offense at the constant abuse directed toward the bard (Full disclosure: I play a bard) and his personality deserving of the abuse. 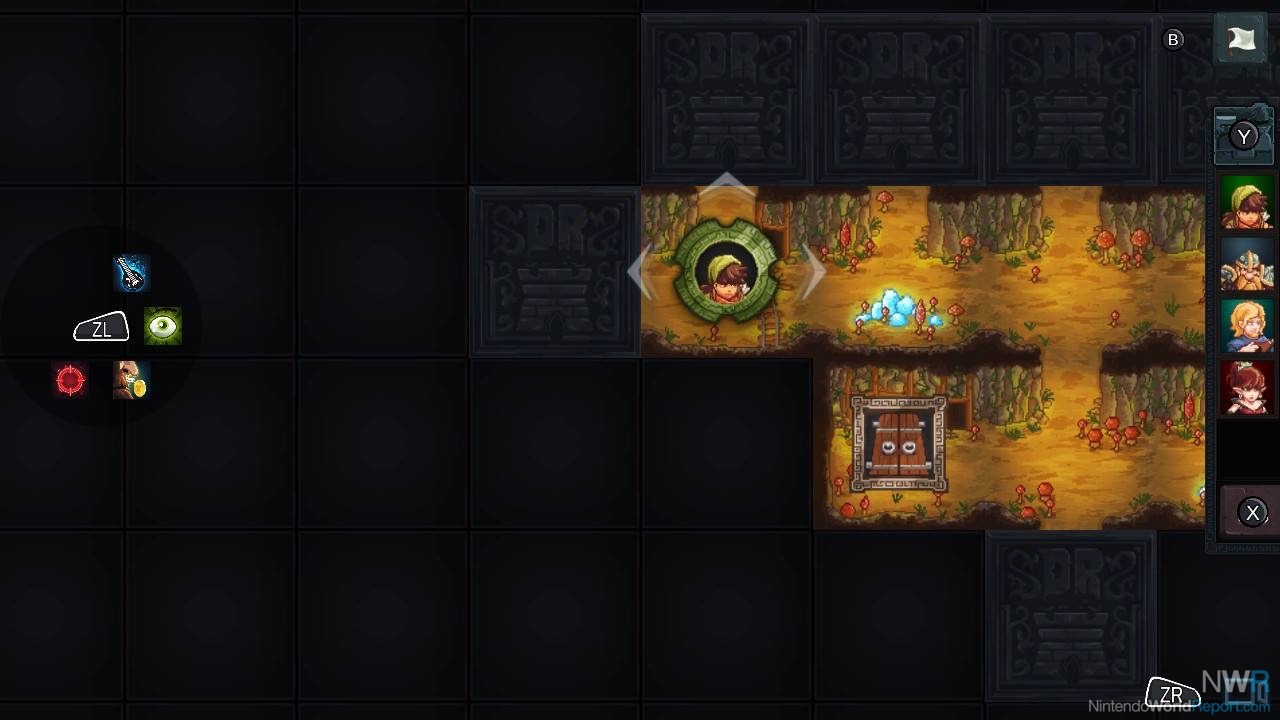 The map, menus and store are underexplained and buggy. Tapping on a boat on the map brings up an expensive roulette wheel, but the game never pointed out the boat. I can’t figure out how to access it with the controller, either. Paging through menus takes seconds to load each page. The store presents a handful of items at a time with no way to compare items to what’s currently equipped. Buying an item often purchases the item next to it accidentally. Characters on the bench can’t have equipment swapped or traits upgraded until swapped into the party. Some quests, like having no characters KO’ed, can be cheesed by swapping out KO’ed characters even though the character select screen says swapping characters is unavailable in dungeons. Are we working on the honor system here?

Despite Dungeon Rushers’ many, many technical flaws, the core experience is solid. I can’t recommend this game to everyone, but hardcore RPG fans looking for a simple, no-pressure RPG to play while watching TV should consider Dungeon Rushers.