They're not even a real country, anyway.

Taking the construct of Oregon Trail and mixing it in with some modern roguelite design generally makes for some interesting games. Death Road to Canada is the latest lovechild of that stylistic blend, as this retro-styled, narrative-heavy game features random characters going on a frantic car ride from Florida to Canada amidst a zombie apocalypse. Much like the title implies, death is a constant, but it often crops up in cruel, random ways that wrest the control of your character’s destiny away from you. Death Road to Canada is filled with weird, humorous moments, but feels more like a neat experimental story than a great game. 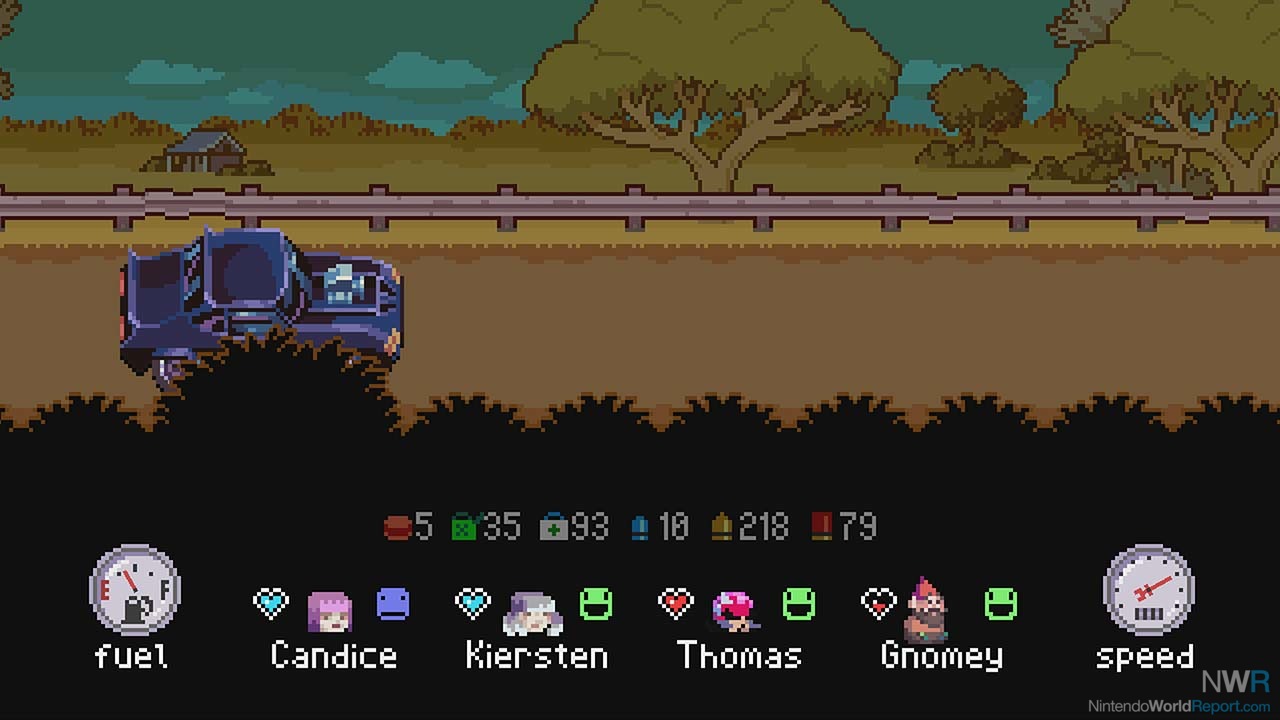 Character creation, be it through custom or random means, is a major focus. Characters have different perks and traits and can be designed using a variety of premade sprite heads and bodies. As you journey through the wilds of the road, more characters can join you. Some of them are even clear references to pop culture touchstones, like the erstwhile hero Lank, who shows up with his own specific sword. It’s fun making characters, and having the ability to upgrade the different archetypes as you earn Zombo Points on your journey means you can have a little bit of an advantage to start the trek.

But that advantage might not matter, as Death Road to Canada is one hell of a random number generator game. Play is split into two main areas: driving and exploring. When you’re driving, you usually have a car (unless the car broke down or ran out of gas) and numerous random encounters and narrative events come up. Usually, you have options, whether it’s trying to see if one of your party members wants to heal or wrestle a fallen moose or see if your car can ram through a crazy armored guy. However, a lot of these narrative events just tell you that some stuff went down. Maybe bandits looted you or one of your characters stubbed their toe. The events get more fatal and demoralizing as your party weakens and gets unhinged. The results are often humorous, but it can get frustrating when you’re rolling fine and a random attack ruins your party’s survival chances.

The exploring is when you have some more agency as you enter different environments to look for supplies with your four-character (or fewer) party. Multitudes of weapons can be equipped on your journey, and you can add more to your arsenal through looting and bartering, in addition to trying to make sure you have food, health, ammo, and gas. Zombies are everywhere, but the best way to handle them is to avoid them. That’s easy to do because combat isn’t that great. Just tap a button to attack. The only neat thing about is that you can pick up furniture and throw it at zombies. If you get overwhelmed by zombies, it’ll likely result in a game over or heavy losses. But at least you had a fighter’s chance when that happens as opposed to when a random narrative twist kills your party otherwise.

And that’s essentially what Death Road to Canada boils down to: a whole lot of death and the occasional touch of Canadian glory. Other modes are present, mostly to up the difficulty or make the characters you encounter be pulled from your custom characters or the pre-made pop culture-influenced ones. Zombo Points are earned during your travails and those can be used to upgrade character traits and perks or add new ones. The sense of progression wasn’t all that gripping, though. The joys of Death Road to Canada aren’t found in game completion or accumulation of upgrades. It’s all in the goofy, weird narrative stuff, and also the music. The music is oddly upbeat and helps make the whole experience feel surreal and mildly disturbing.

The wacky narrative escapades in Death Road to Canada are where it excels, but it falls apart when you actually want to progress. The brutal, random nature too often made me feel like I had little agency in my quest, which made it hard to really care about ever making it to Canada reliably. The reward for my death road was the unusual tales I created along the way, not the gameplay.

I have the Steam version (been awhile since I played it since I don't have online at home anymore and it stupidly requires you to log onto Steam when you start it up), and yeah it's a fun game but it's HARD. Even with friends, you will have a hard time beating it if you get bad luck with the RNG (you might run into a situation where you suddenly lose half your supplies, then run into a swarm of zombies).

I came for a dig at Canada, was not disappointed.