I seem to be continually late to the party with the Donkey Kong Country games. I have memories of the original Super Nintendo games, but it took years before I ever earnestly completed them. Likewise, with Retro Studios’ rebirth of the series on Wii, Donkey Kong Country Returns didn’t honestly click with me until the 3DS release. When Tropical Freeze hit Wii U less than a year after the 3DS port of its predecessor, a confluence of events ranging from a general disinterest in the Wii U to moving during the game’s launch window left me with barely playing through two worlds of Retro’s follow-up. The re-release on Switch provided me an opportunity to go back to this forgotten game and I’m very glad I had the chance to go back to it. Donkey Kong Country: Tropical Freeze is a gorgeous, immaculately designed platformer that might just be the best of its kind that Nintendo has made in years. 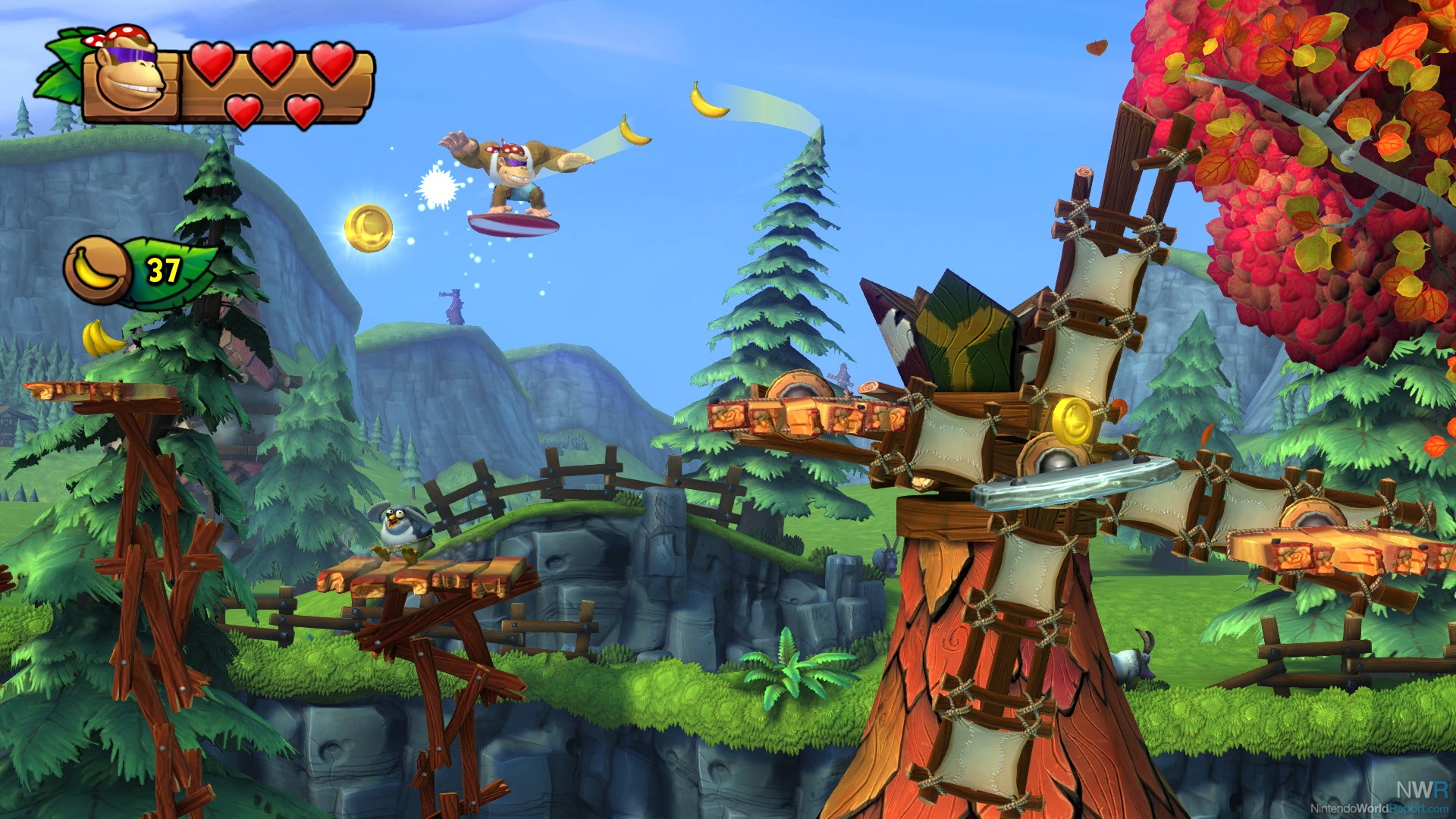 The setup isn’t too different from past DKC games, as DK and his brethren are hanging out, this time celebrating a birthday, when all of a sudden some snow-loving viking animals freeze Donkey Kong Island and blow Donkey, Diddy, Dixie, and Cranky off to far-away lands. The path back to home is packed with platforming challenges oozing with variety, whether it’s the vehicular minecart and rocket barrel stages or good old-fashioned precision jumping and rolling. Everything in the levels is placed with care. This is a world that makes sense, which is ultimately a small thing that helps embellish the greater whole. The variety is also wonderful. Levels are distinct and while themes carry over, the gameplay continuously tweaks and evolves.

In my overdue finished playthrough of Tropical Freeze, what stood out to me the most was the back half’s uniqueness. I didn’t realize just how much the game kept changing and mutating as the worlds changed. It doesn’t follow the platformer tropes as much as other games and it helps to make this feel less planned and predetermined.

Playing solo as Donkey Kong reminded me of how challenging this game is. Death happens a lot and while it’s not to the painful levels of your Meat Boys and your Celestes, Tropical Freeze doesn’t hold your hand, until Funky Mode. Even still, while playing as Funky Kong gives you basically the best of all possible Kongs, this happening monkey is the kind of hand-holder who will just let your hand go sometimes. The game is much easier, but it’s still not a cakewalk. Bottomless pits are still unavoidable and Funky’s surfboard hover still requires skill to use effectively. Funky Mode is the evolution of the Super Guide, which started with a Super Kong in Donkey Kong Country Returns, changed into an easier item-boosted mode in the remake, and has now taken the form of a different playable character in the Switch release. The addition of Funky Kong does not sully the experience, as the original mode is still intact (as well as a locked hard mode if you’re nasty). Funky just adds variable difficulty, making Tropical Freeze totally completable outside the realm of the platforming savants. 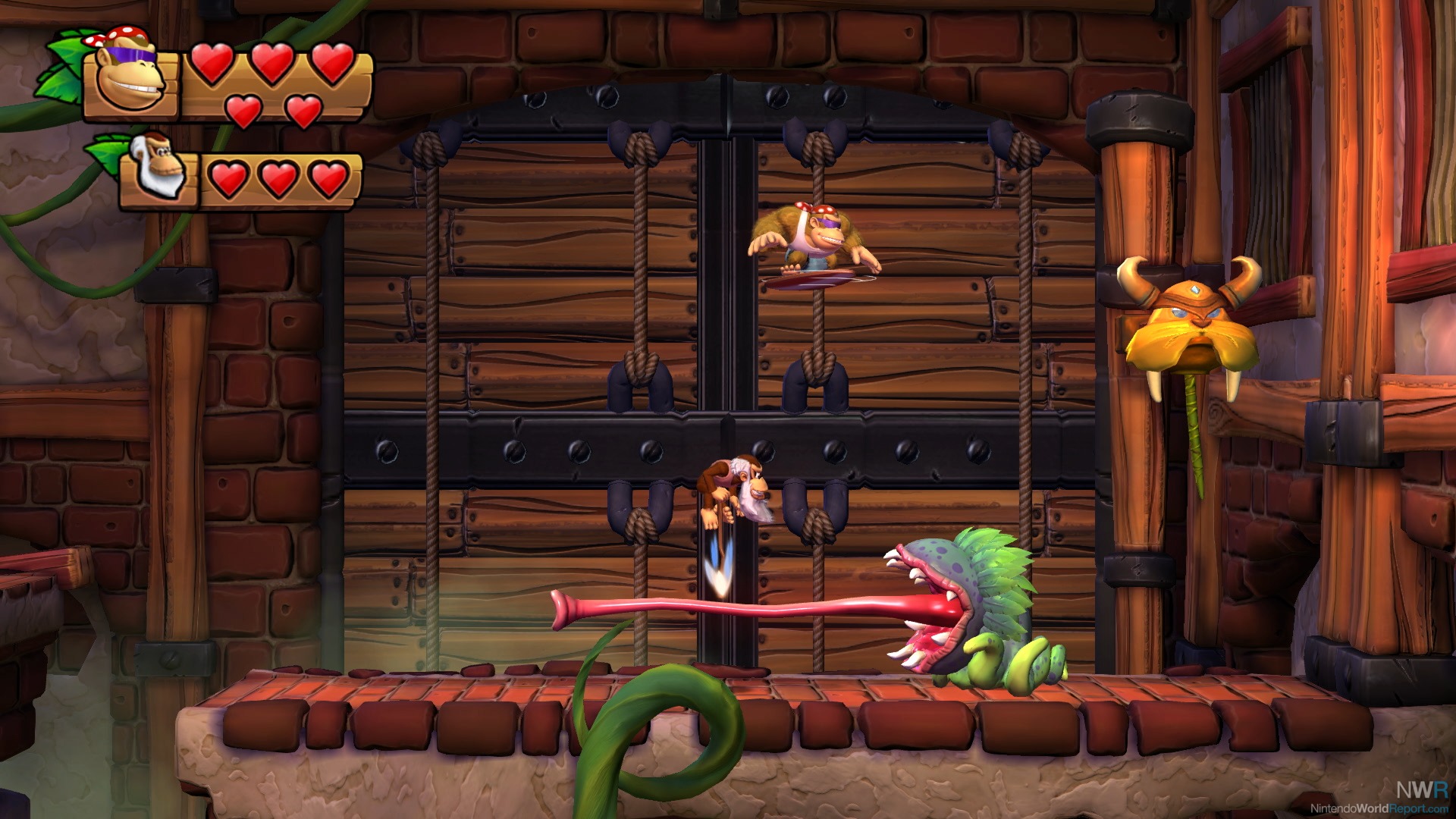 Funky Mode is the largest addition to Tropical Freeze on Switch. Aside from that, the other benefits to the Switch version is the fact it’s on a system that more people own, the load times and visuals are a little improved, and co-op is easier to set up. Online leaderboards for time trials are also a nice touch. Double-dipping on the Switch seems like a tricky proposition if you played the heck out of Tropical Freeze on Wii U, especially at full price. To those who missed out on the Wii U era, dropping any amount of money for this fantastic platformer is well worth it. For those who rolled credits on this adventure before, it’s all about your zeal for revisiting these levels. You’re not going to find a lot of new things, but at least you know you’re going to find some awesome things all over again. Regardless of whether or not you’re down for buying Tropical Freeze on Switch, the lone certainty here is that this is the definitive version of Donkey Kong’s latest and greatest. It’s a great thing to have this awesome game playable on Switch now. And Funky’s rad.

I have Tropical Freeze on Wii U, but I barely played it. I decided to keep my preorder for the Switch version so I can give it another shot on the console I use the most.

I read the load times are significantly improved so I expect a smoother experience.

Oh wow!  So they took a rather boring game filled with bland design* and cheap moments that increase difficulty, and made it fun? Neat.

(Totally unofficial third opinion:  DKC:TF certainly didn't ring any bells for me on Wii U, so hearing the game hasn't been significantly changed is enough for me to write it off immediately. After playing to completion after getting the game for free through Club Nintendo, I wish that I had spent my time playing something else. Tropical Freeze looks great, and the soundtrack is impressive, but for anyone who isn't already in love with the DKC series would be wise to approach with caution...)


* The design is varied, but levels are almost always straight-forward with the challenge being related to timing and reaction speed. I've always greatly preferred a design that gives players varied routes and methods to get to stage end instead.

I really liked Tropical Freeze overall, but I thought the boss battles were too difficult. I got stuck on one of them about half way through and stopped playing it.

I doubt I will ever buy this Switch version.

I know that these ports are meant to be cheap, fast tricks to pad the Switch's release schedule, but I do wish this was a "collection" with an HD version of the first DKCR. I'll grab it eventually as I never nabbed it on Wii U, but it is certainly low on the priority list. Too much other good stuff I need to get first.