We break down the Labo Variety Kit and try to make sense of the Nintendo’s cardboard curio.

The Labo Variety Kit contains five different builds, each with their own intricacies and eccentricities. While the introductory RC Car is a quick 10-minute build, the other four (Motorbike, Piano, Fishing Rod, and House) are much more involved. We split up and dove deep into the different Toy-Con and our three writers all agreed upon a final review score for the Variety Kit. 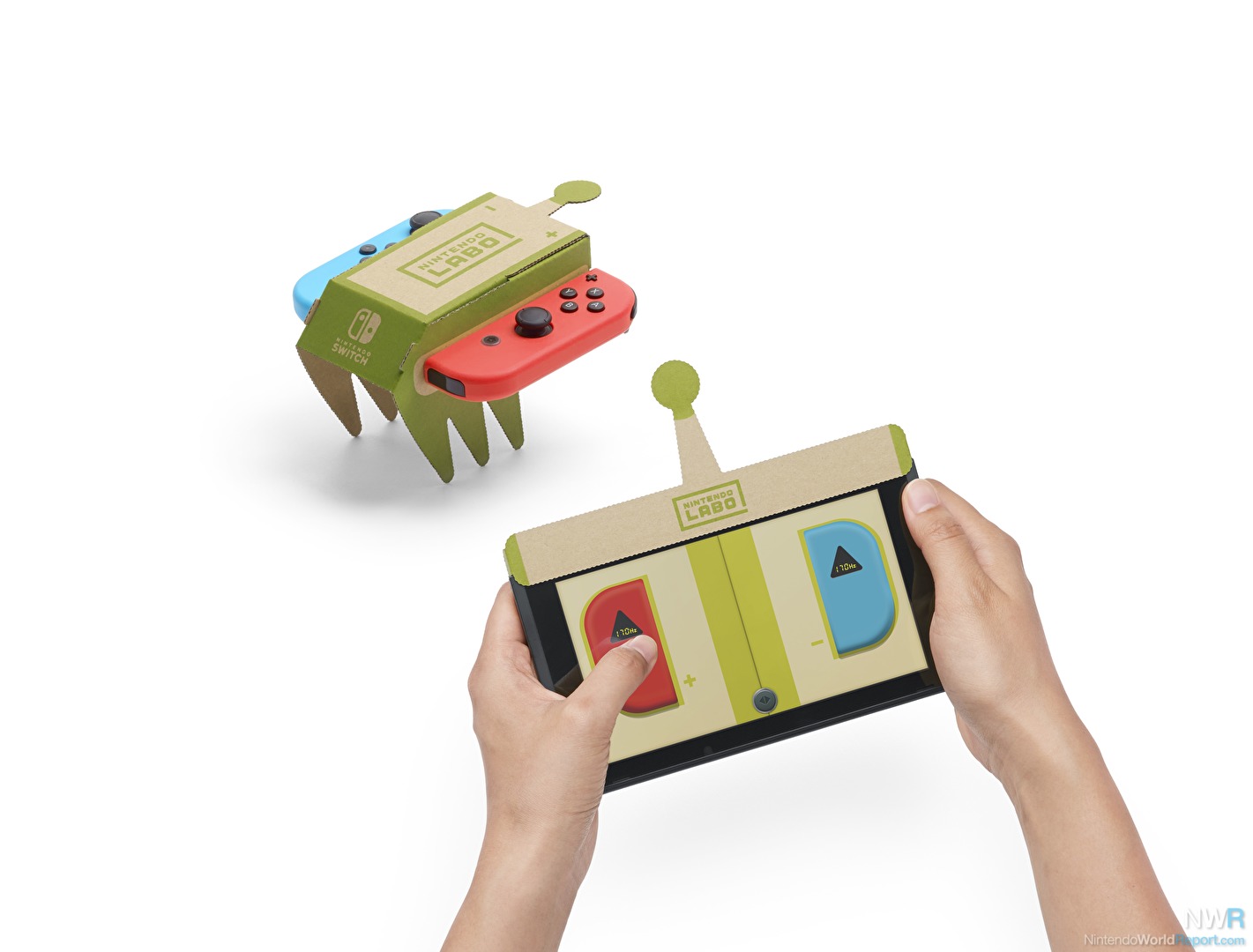 The RC Car serves as an introduction to Labo as well as a tutorial on how to navigate the construction software. While it isn’t required to do first, it encourages you to because quite frankly, it is by far the most simple to build. In fact, the RC Car is just one piece of cardboard, so all that needs to be done are a few folds along the creases and securing the tabs into place and voila you’ve constructed your very first Toy-Con.

The onus here is showing exactly how the software works and it works extremely well. Rotating, zooming, and adjusting the speed of the instructions is a breeze and helps to make it abundantly clear on what to do next. When it comes to playing with your RC Car, it’s limited, but extremely novel. Movement is caused by the HD rumble in each Joy-Con, which can be activated via touch screen or using the trigger buttons on another controller. The IR camera displays a point-of-view shot from the RC Car, which is insanely cool. A cute two-player Sumo game where you need to topple the other car on its side is also highlighted. There really isn’t much depth to the gameplay, but it’s a nice way to familiarize players with the concept. - Casey Gibson 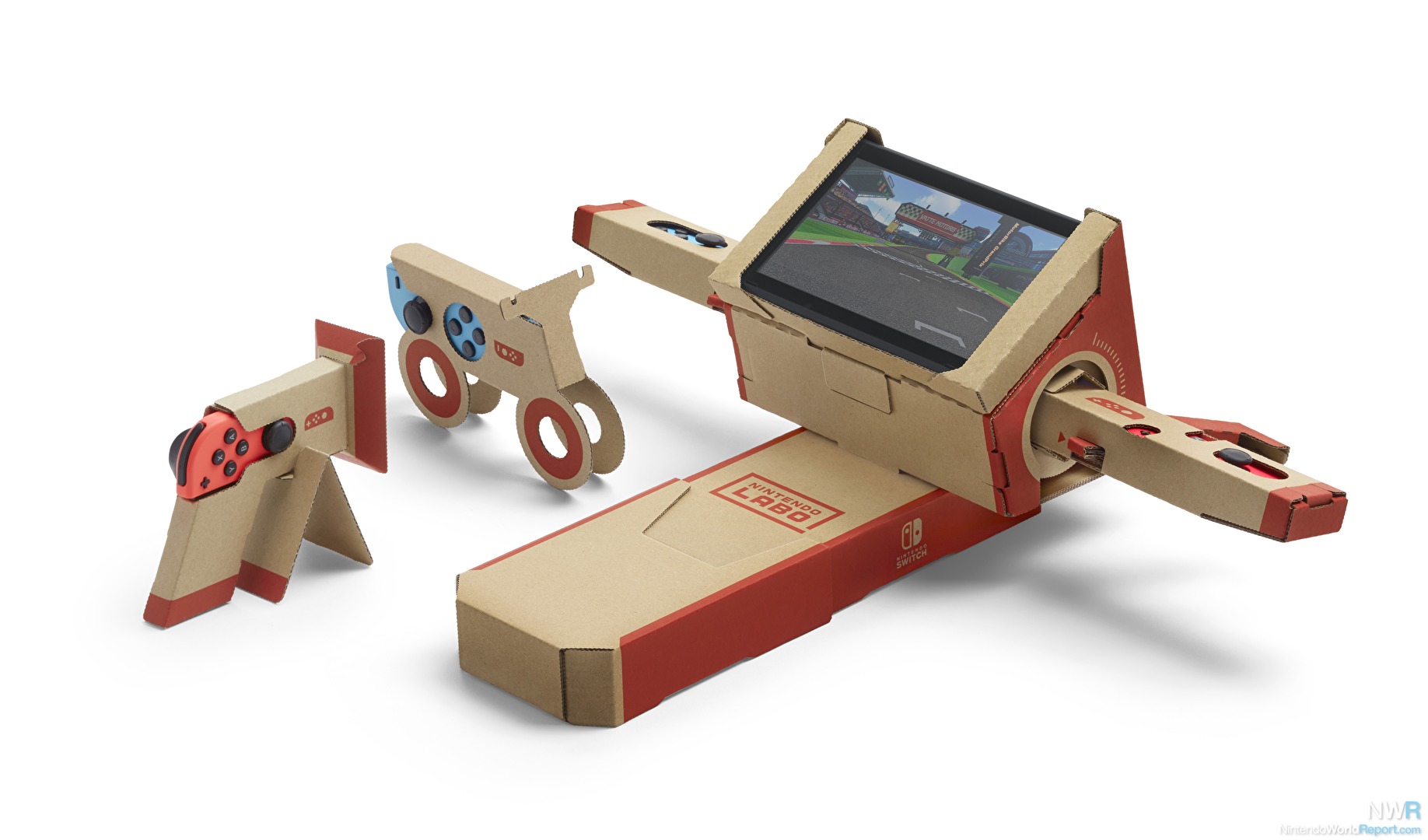 After the RC Car, the first Labo kit I built was the Motorcycle. I enjoyed the build, especially seeing the ridiculous handlebars take shape as I folded up cardboard. The complete work was shockingly sturdy and I was stoked to plop my Switch and Joy-Con in the requisite places to get to driving.

In some ways, the racing just feels like tilt controls in Mario Kart, but the X factor here is HD rumble, which provides an incredible sensation that adds a lot to the motion-controlled driving experience. Only nine races split across three Grand Prixs are available, but you can also make your own tracks using motion controls. It feels like a rough draft of a Mario Kart game, even including drifting and some rudimentary items. The racing has some nuance, but it isn’t that engaging overall aside from the neat feeling of the cardboard handlebars.

The tools to create tracks are super intuitive, whether using the handlebars or the Toy-Con Mini-Bike, which is just a small bike that you can put a Joy-Con into to make designing tracks cooler. A rudimentary Stadium mode lets you freely drive around an arena that can be modeled off of a real-life image taken by the Joy-Con IR camera. While I only dabbled in the Garage, I could see people doing some wild things using all these tools.

Overall, I don’t see myself revisiting the Motorcycle too often. If I desperately want to race on Switch, I have far better options, even if I want to use motion controls. The handlebars are neat, but aside from the mileage you can get out of Garage, Motorcycle’s content doesn’t have much meat on the bones after you build it. - Neal Ronaghan 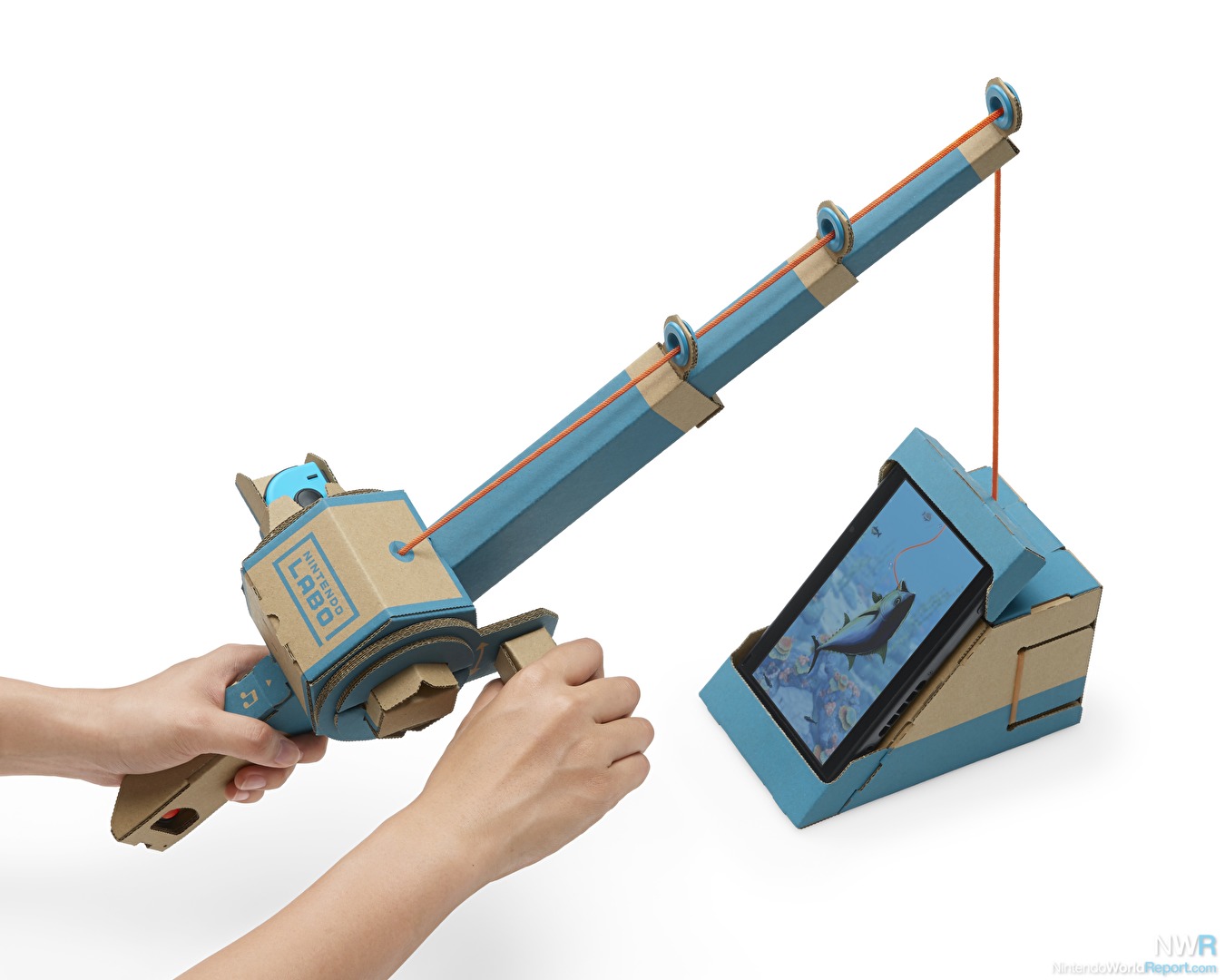 When looking at each Toy-Con included, many expected the Piano to be the most difficult or confusing to construct, but I found the Fishing Rod to be deceivingly complex. The rod itself is retracting, so you’ll be making a few similar pieces that slide within each other. The most interesting part was putting the reel together and slowly seeing how it all comes to work. I love that the fishing line on the Toy-Con goes right behind the Switch’s screen, making it feel as if it really is your line in the Switch. The rubber bands within the reel also give it a form of resistance that helps to immerse the player.

As for the game, it is pretty straightforward, but it actually has a lot of replayability. The objective is to catch three fish, which doesn’t sound too difficult and if you stick to shallow waters, that’d be true. However the beauty of fishing is that there’s a self-governed difficulty level. By going deeper the fish become far more difficult to catch, not only because of the greater distance needed to pull them in, but the fish are far more aggressive in fighting especially the big boys such as the shark and marlin. I also found this was one of the better Toy-Cons to show off to people unfamiliar with Labo to highlight what it can do. - Casey Gibson 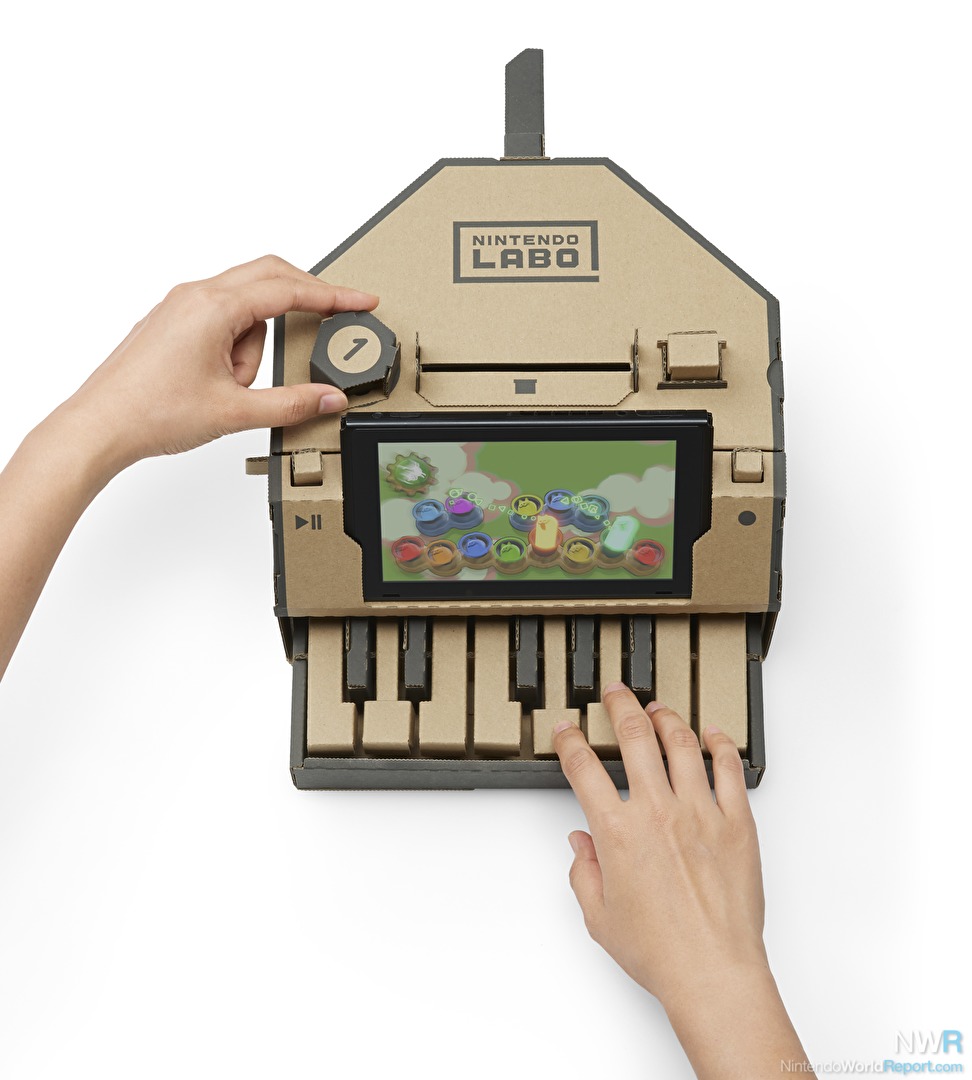 Probably the most marketed of the Toy-Con in the Variety Kit, the Piano is truly a wonderful culmination of the IR technology in the Joy-Con. Its versatility extends from being a simple toy piano, to a music maker studio, an aquarium, and an apex of what can be done in Toy-Con Garage mode. I found the fishing pole to be a more complex piece of equipment to build, whereas the piano certainly takes longer but is easier in terms of construction. There is a great deal of repetitive folding simply because much of the piano's pieces are the same, with slight variations - each key, button, and knob, etc. But these features provide the piano with more out-of-the-box functionality then any of the Toy-Con.

Knobs allow the piano's sounds to be different, ranging from cat noises to Joy-Con vibrations. The tune and pitch can be changed as well. Musicians can get crafty in studio mode to create their own compositions, while also recording special rhythms using cards that can also go in the piano. There really is a lot to do with the piano, and it acts a fantastic display of what Labo is. It's fascinating to build and learn about, to show friends, create your own content in the garage or studio, and play with. - Xander Morningstar 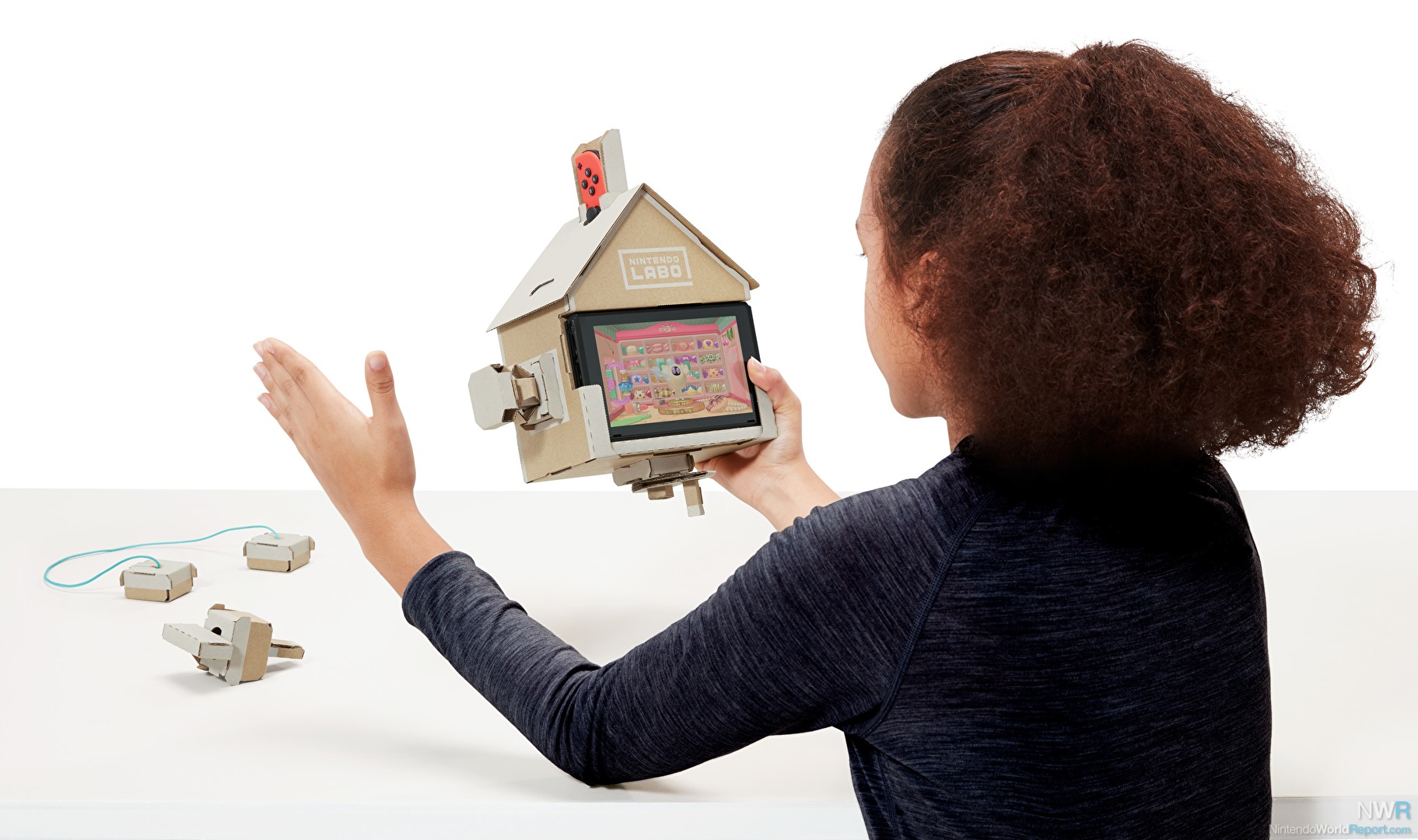 The most intriguing and puzzling of the Toy-Con included in the Variety Kit is the house because it is hard to imagine what exactly you’d do with it once completed. As far as construction goes, it strikes a nice balance of ease and complexity because it throws the reflexive tape into the fray. Putting together the house isn’t too difficult, but a few attachments like the button and crank require a bit more attention. Putting the reflective tape down correctly is important because it’s vital to how this Toy-Con works.

Once everything’s built, the Switch slides into the front panel and you’ll see the interior of the house, which is occupied by a cute creature. Plugging the attachments into the bottom and sides of the house alters what you can do on screen and mixing and matching unlocks further options. Some are as simple as a music mobile putting the creature to sleep as you turn it, but others are more fun like the mine cart mini-game where you must collect coins and avoid bombs by pressing the button attachment. By playing games you earn different treats to feed the inhabitant, which ends up changing its color and fur pattern when eaten. There are nine mini-games within the house and while no one in particular will keep you occupied for too long, it is fun to discover the combination of attachments needed to unlock them. - Casey Gibson

As an adult I agree about the lack of longevity for myself but my 6 year old sister doesn't tire of it quite as easily. Although she eventually loses interest in playing, like with any toy, those first several minutes of play she gets out of them each day seems refreshed each time she plays with them, especially the house and fishing rod.

What was the total time for all the builds + time playing the games?  If it's close to 12-15 hours then that seems pretty standard for a modern game. I think you have to factor in the build time right?that's part of the experience. 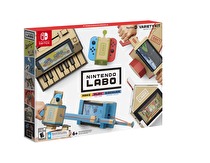