Farts, laughs, and some slowdown.

Somewhere along the line, licensed games gained the stigma of being generally inferior and forgettable experiences, but luckily the pendulum is on the upswing with the South Park franchise at the forefront. The 2014 release of The Stick of Truth took gamers by surprise, showing that you could take a licensed property and deliver an original story with fun game mechanics. Capturing the magic in a sequel is always tough, but The Fractured but Whole does a good job of following it up with another great offering, though not without fault. The Switch port does have a number of blemishes like frame rate issues, uneven load times, and some weird audio/video cut outs. Though they don’t ever cause mechanical issues while playing, I was left pining for a smoother experience. 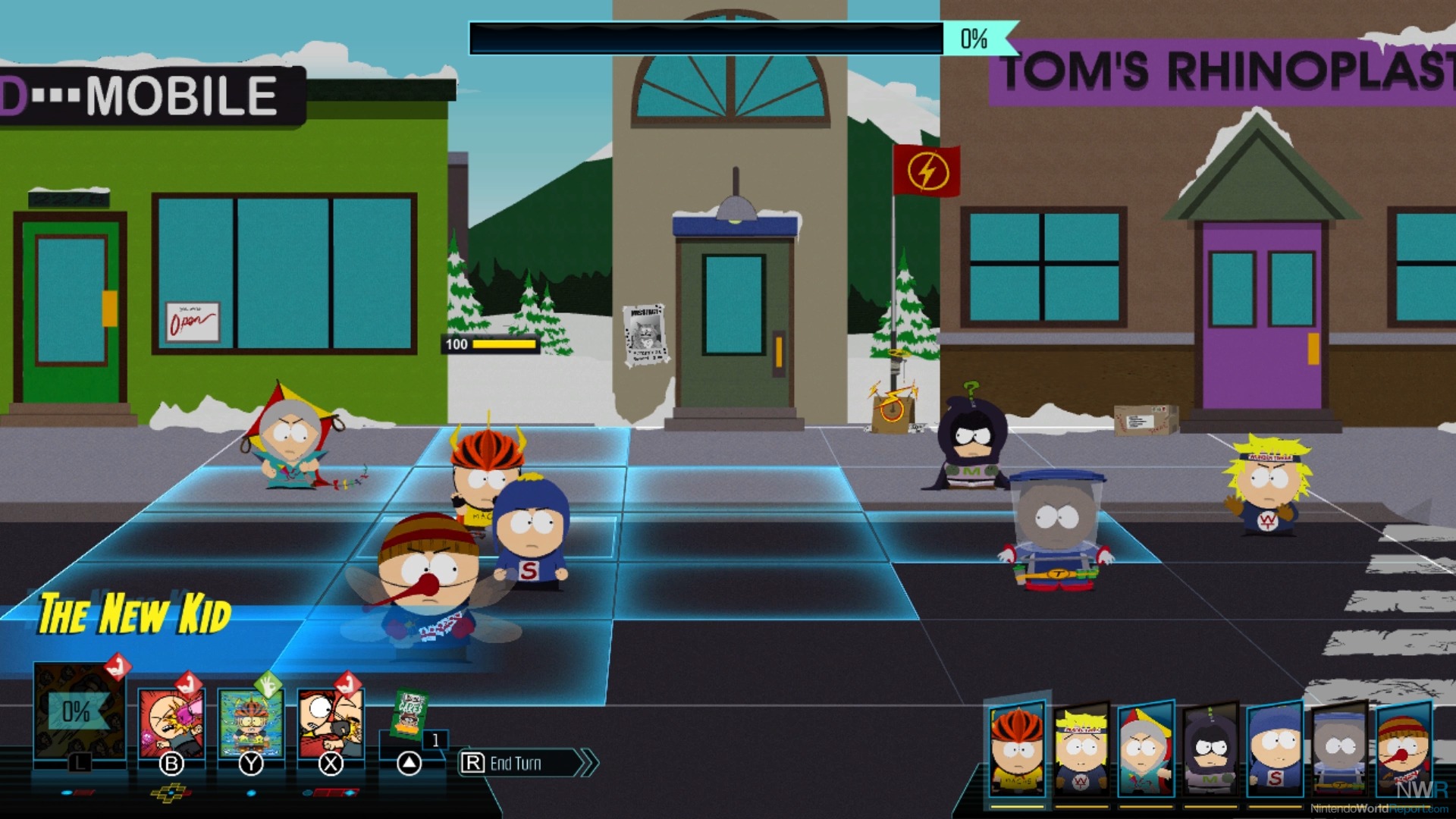 If you’re interested in The Fractured but Whole, there’s a good chance you already know what to expect from South Park’s storytelling and crude humor. The game takes place in South Park when a player-created new kid wants to join Cartman and the gang as they attempt to build up their superhero franchise. In order to do so, they must find a missing cat to receive the reward of $100, which they can in turn use to further boost their franchise popularity. Of course this leads the gang on a rollercoaster of seemingly random and outlandish events as they both befriend and battle familiar faces to uncover the truth behind the missing felines. In trademark South Park fashion, be prepared for an onslaught of fart jokes, vulgar language, and disgusting situations along your journey, which will be more than enough to turn off some. In fact, the protagonist of the story is known for his unmatched rectal abilities that allow him or her to defy time with the power of farting.

Exploring South Park and interacting with townspeople is a pleasure and the combat does a very good job of rivaling that feeling. Battles are turn based, but instead of remaining stationary, you move within a grid, which varies in size from encounter to encounter. Knowing how to effectively navigate the grid is vital to your success, especially since many skills rely on positioning. Heroes play quite differently from one another thanks to the 10 classes, so mixing and matching to find your preferred party is extremely satisfying. Each class has three unique abilities and a devastating ultimate that can turn the tides of battle on a whim. Some characters focus their powers into one area of expertise, but others are more versatile, which helps to encourage changing instead of finding one grouping and sticking to it. While it is turn-based combat, action commands help mitigate incoming damage and boost output. Battles are relatively sparse, but that helps to keep them fresh, especially considering each battle takes a bit of time to complete. On story missions they’re more common, but when running around the town you’ll only encounter a handful of them. 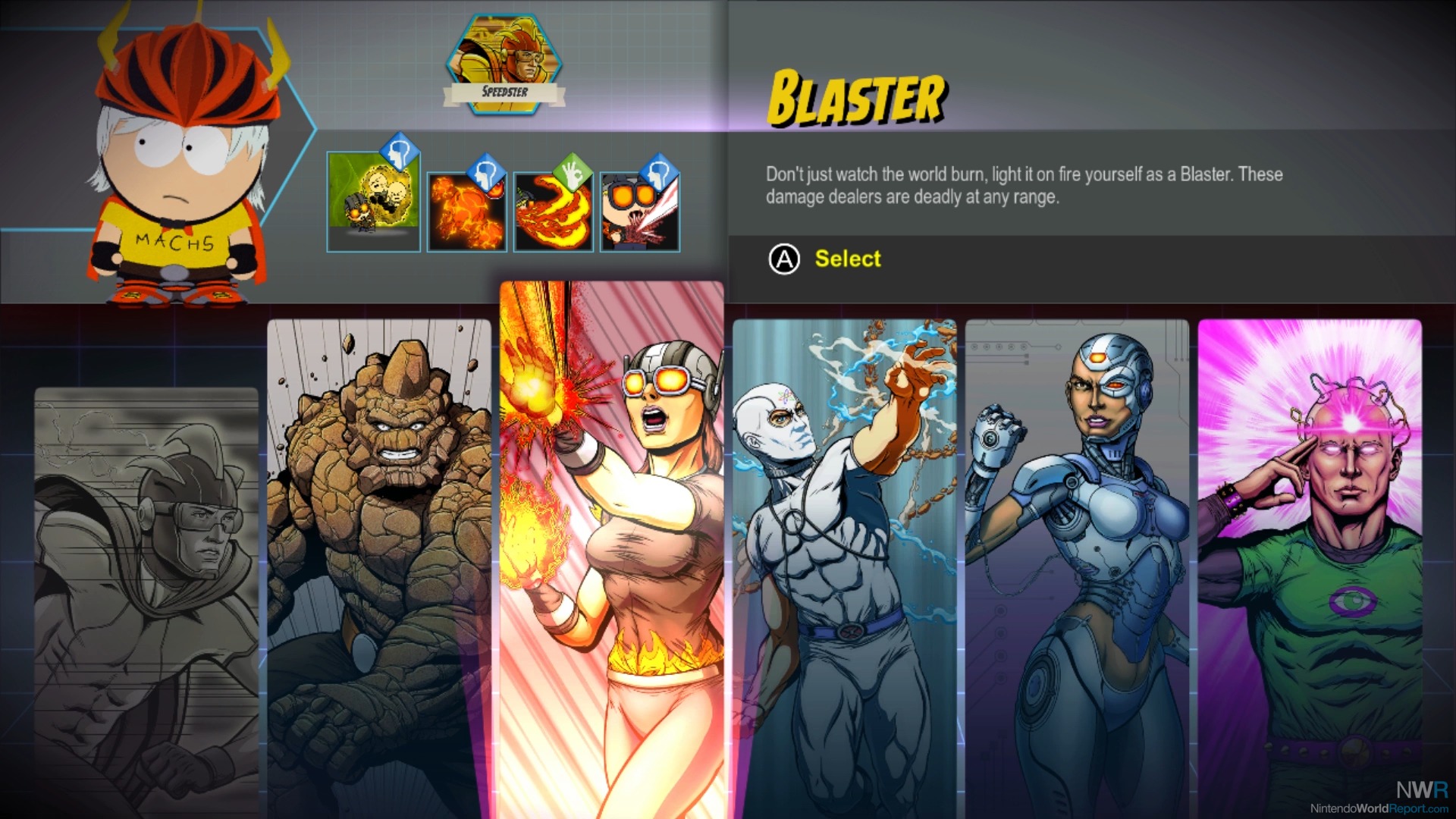 Traditionally in RPGs you’ll be mowing down hundreds if not thousands of enemies to increase your level, but The Fractured but Whole strikes a nice balance between fighting enemies and completing quests to power up your hero level. Upon reaching a new hero level, instead of powering up stats, it unlocks something called an artifact slot. Filling these slots with artifacts will increase your character’s might level and in turn make them much more effective in battle. Quests each have a suggested might level, so it also serves as a good indication on what you should be focusing on. Artifacts can be found while out journeying, purchased from vendors, or even crafted. I found this to be a different, but welcomed progression change for equipment. It works great especially when the onus is on making your superhero unique and having stat boosts tied to certain pieces of gear could result in everyone having similar looking heroes. What is probably the best feature for character progression is being able to change your class at any point of the game with a quick visit to the Coon’s lair. As you progress through the game, the ability to mix and match different classes becomes available allowing for further customization. I thoroughly enjoyed tinkering with this.

Outside of the main quest, South Park has plenty of sights to see and things to do. Like any good superhero looking to gain notoriety, a recurring side quest will be to get Coonstagram followers by snapping selfies. Every person’s requirement for a selfie is different: some are willing regardless, some ask you to do them a favor first, and others demand you have a certain number of followers. Other side quests see you having a sit down with Mr. Mackey to discuss gender and speaking to Jesus about religion, to name just a few. While most side quests aren’t required to progress forward, a few that must be completed because of the skill awarded for completion. The quests are usually funny and give you some downright silly abilities. For example, sticking a hamster up your butt to launch it at electrical wires to short out a locked door is a thing that will happen often. Checklist quests also keep tally of certain actions taken during the adventure and yield experience once completing them. Some inconsistent load times are spread throughout and they are most noticeable when bouncing around town. 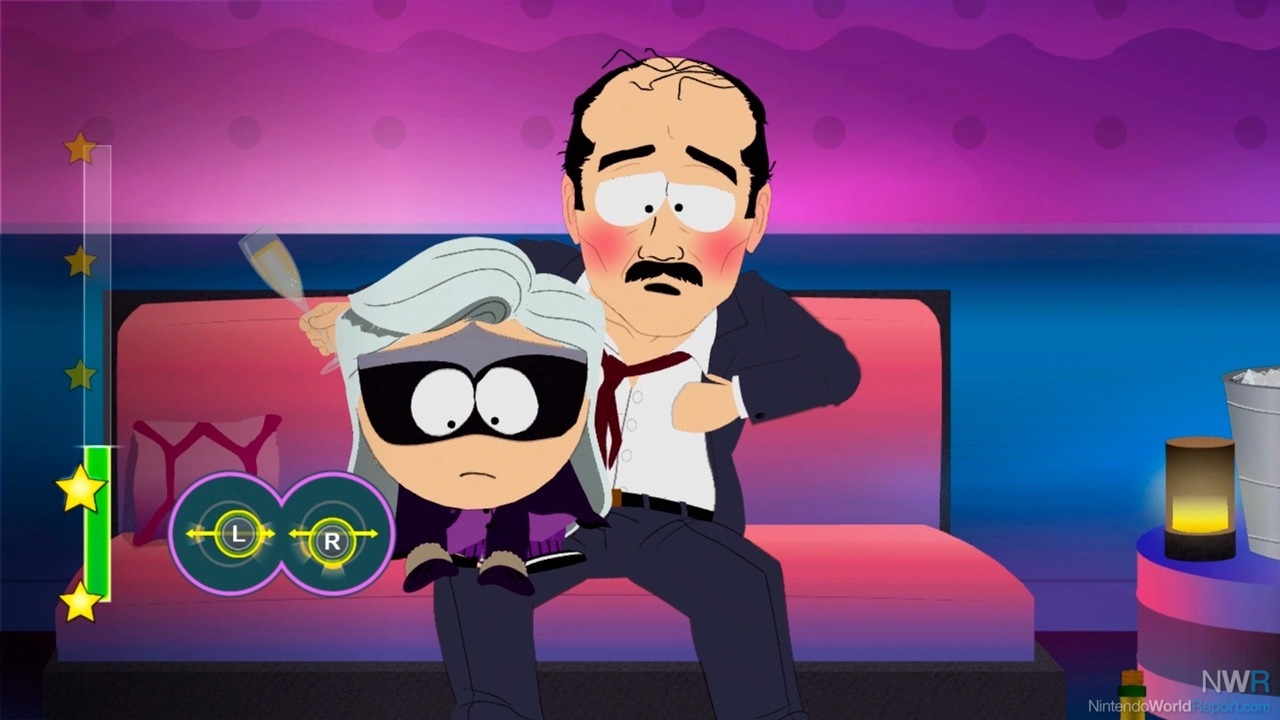 Arguably the coolest aspect of South Park is that it looks exactly like the show and if someone had walked in and didn’t know better, they’d figure they were watching an episode. That feeling is only compounded by the fact every character is voice acted. Traveling through South Park feels and looks like it should, that is until the slowdown kicks in. Sadly it is commonplace, but fortunately it was exclusive to traversing town and I didn’t experience any slowdown during battles. In most cases it was minor and just resulted in the screen movement not being as smooth, but a few instances cropped up where it really chugged. Coupled with some weird cut out on audio during ultimate moves and the occasional graphical hiccup transitioning to and from cut scenes, and I couldn’t help but wish everything was more polished. I found this to be the case in both handheld and docked mode. I want to reiterate I only found this to be the case outside of combat, so while an annoyance it didn’t cause any issues that prevented me from progressing.

When I first picked up South Park The Fractured but Whole, I knew the humor and overall tone of the game would appeal to me, even being a relatively lapsed fan of the series. What I wasn’t so sure of was how well everything else would come together and barring a few technical issues, I was pleasantly surprised. The battle system, while relatively slow paced, was engaging and I never found myself avoiding a chance to beat up some sixth graders or cops. And while the slowdown is noticeable and certainly distracting, I only experienced it in some areas while exploring and never while engaged in combat. There are other areas that could use polishing, but putting up with the little annoyances was worth it to see the game through.

I haven't watched the show religiously in a super long time, but was able to fully enjoy the humor and story. There were some things that might have been more clear having more knowledge of the recent seasons for example two boys were in a fight with one another, but I found out they were actually dating and had broken up. It didn't ruin anything, but having context might have made things more clear from the onset of that quest.


There were some nice call backs to things I did remember from watching. I'm sure there were some I didn't pick up on, but nothing too important that it ruined the story or game.