When looking for a classic action platformer, finding a number of offerings that fit the bill usually isn’t much of a problem, but finding one that feels right while adding an addicting hook is another story. Luckily for us, the fine folks over at Flyhigh Works were able to capture just that with Ninja Striker and its crazy combo system. While there are a few minor hiccups along the way, it proves to pack a much bigger punch than one might anticipate from first glance. 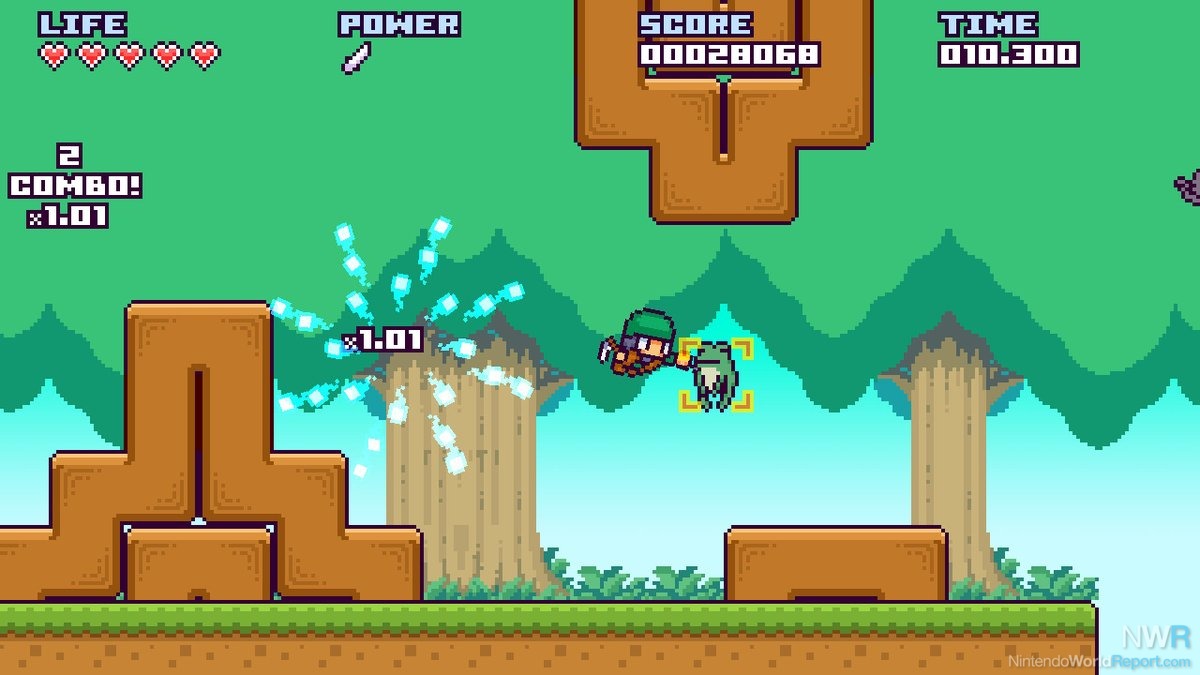 Ninja Striker is very much a side-scrolling, action platformer, so as you would imagine the objective is to reach the end of the level without losing all your hearts. Where it differentiates itself from its brethren is with the different abilities afforded to you. While it’s really only three abilities, double jump, homing attack, and a special attack, when used in conjunction with one another everything starts to click as you find new ways to traverse each area. Movement is crisp and double jumps are pretty standard fare, but the homing and special attacks really open up your movement options. Homing attacks send your ninja hurling towards an enemy and it can be used over and over to chain attacks. With each successful homing attack you regain the option to jump. Initially I couldn’t find much of a purpose for the special attacks as the homing attacks do such a great job. in fact they’re so good it makes certain stages far too easy. I eventually learned that while they do help deal damage, they’re perfect for giving you a short burst through the air to keep your combo going. Hitting the ground restarts your combo, so it becomes essential to avoid it at all costs when going for high scores. The feeling of perfectly executing a stage long combo while not hitting the floor is beyond satisfying and something that helps encourage replayability. 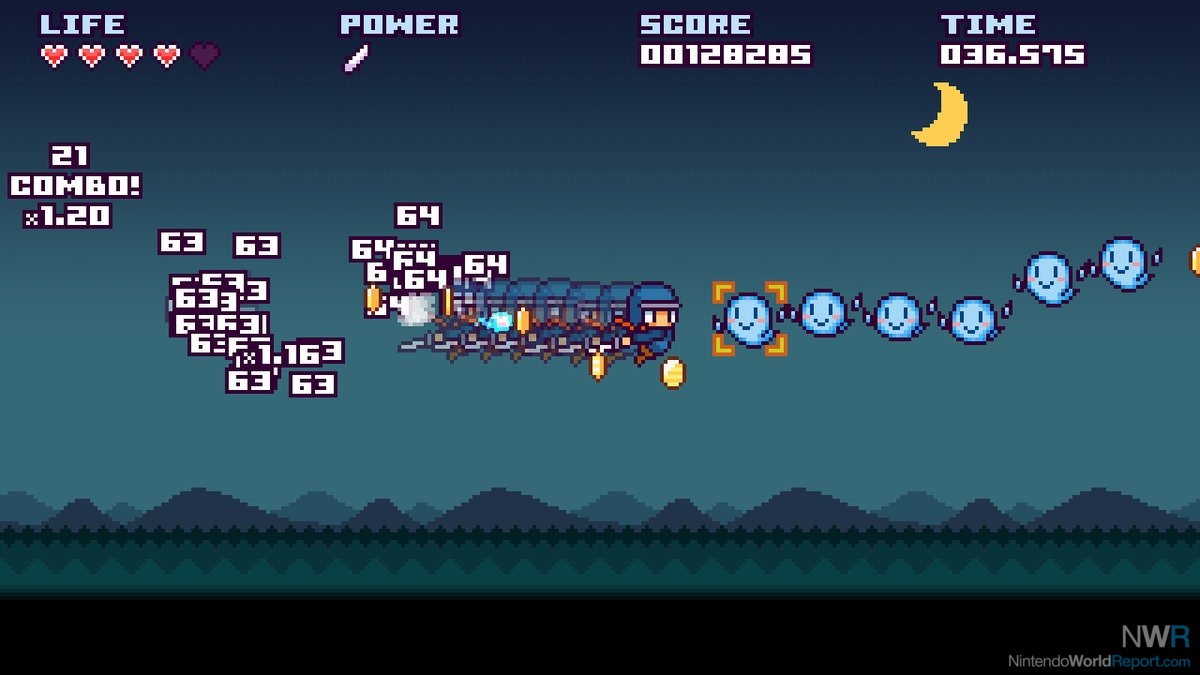 Early on in the adventure, it became evident that levels were crafted to promote the high-flying action and racking up crazy combos. Stages aren’t particularly long, taking around a minute, give or take, to complete by comboing through the air and a little longer if you take to the ground, but the beauty is doing either feels really fun. Taking hits from enemies dwindles your reserve of hearts and losing all will force you to start from the beginning of the stage. Falling into pits yields the same result. What is most surprising about Ninja Striker is just how much content is packed into this budget friendly game. With four different characters to play with and six worlds with four stages each there is plenty to sink your teeth into. The characters each have a distinct feel and play style which makes it a blast to experiment with each one. There are a few examples where spamming the homing attack will essentially take all the challenge out of a given stage, and I found it most apparent with the green hero who uses the sickle. Another weird thing to note is sometimes your homing attack will target an enemy who is behind a platform and your character will get stuck trying to reach the target. Luckily redirecting your homing attack or jumping out of it will fix the issue, but I did run into this a few times where it broke my combo. Each of the worlds end with a cute little boss battle and while no particular one is too difficult, they have a nice scaling from boss to boss. 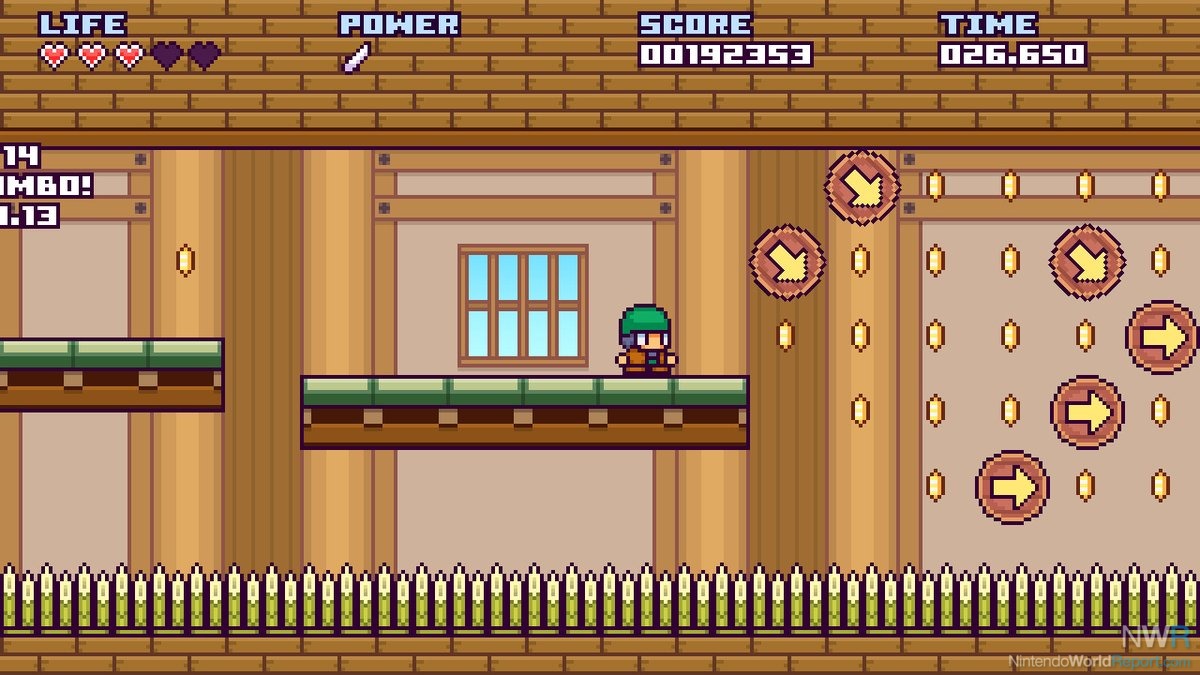 It’s clear Flyhigh Works wanted to capture the look and feel of the classic 8-bit era while adding modern conventions and I think they hit the nail on the head. Both the enemy and hero sprites are big and look fantastic, but what really stood out was just how wonderful the chiptune soundtrack is. It might not be the largest collection of music, but I thoroughly enjoyed each areas track. While you might not think 8-bit graphics would be too taxing on the Switch, with the nature of Ninja Striker, you’ll actually run into areas where the game doesn’t run as smoothly. This is usually when the game launches your character into a folly of automatic boost blasters where you’ll simultaneously be eliminating enemies, collecting coins, and watching your combo meter run off the charts. There are a lot of visual cues for your score and with so many things going on at once, the game does get a little choppy. Fortunately it didn’t negatively affect my experience because during those crazy portions the game is usually taking care of everything for you as you enjoy the spectacle.

When I first sat down with Ninja Striker I was expecting a much smaller experience, but was pleasantly surprised by just how much was jam packed into it. As I continued through I kept thinking I’d run into a part where the game would simply lose its luster, but despite replaying stages numerous times over, it continued to be fun. There are some issues with frame rate and times when spamming the homing attack can dissolve the challenge, but more often than not it’s just downright enjoyable. While this won’t be one you play for hours on end, it’s perfect for those looking for bite-sized fast paced action.