A digital board game that lives up to the real deal.

In a lot of ways, I’ve been waiting for a game like Sumer for years. Outside of video games, I enjoy board games, especially those that fall into the worker placement category. When those games are translated to video games, it’s generally done in a way that only mimics the physical experience. Sumer, from new developer Studio Wumpus, is purely a video game, drawing inspiration from tabletop gaming. It is a board game in nature, but made to order for the mechanics of video games. Sumer is brilliant in its design as it fuses two disparate game styles into one. 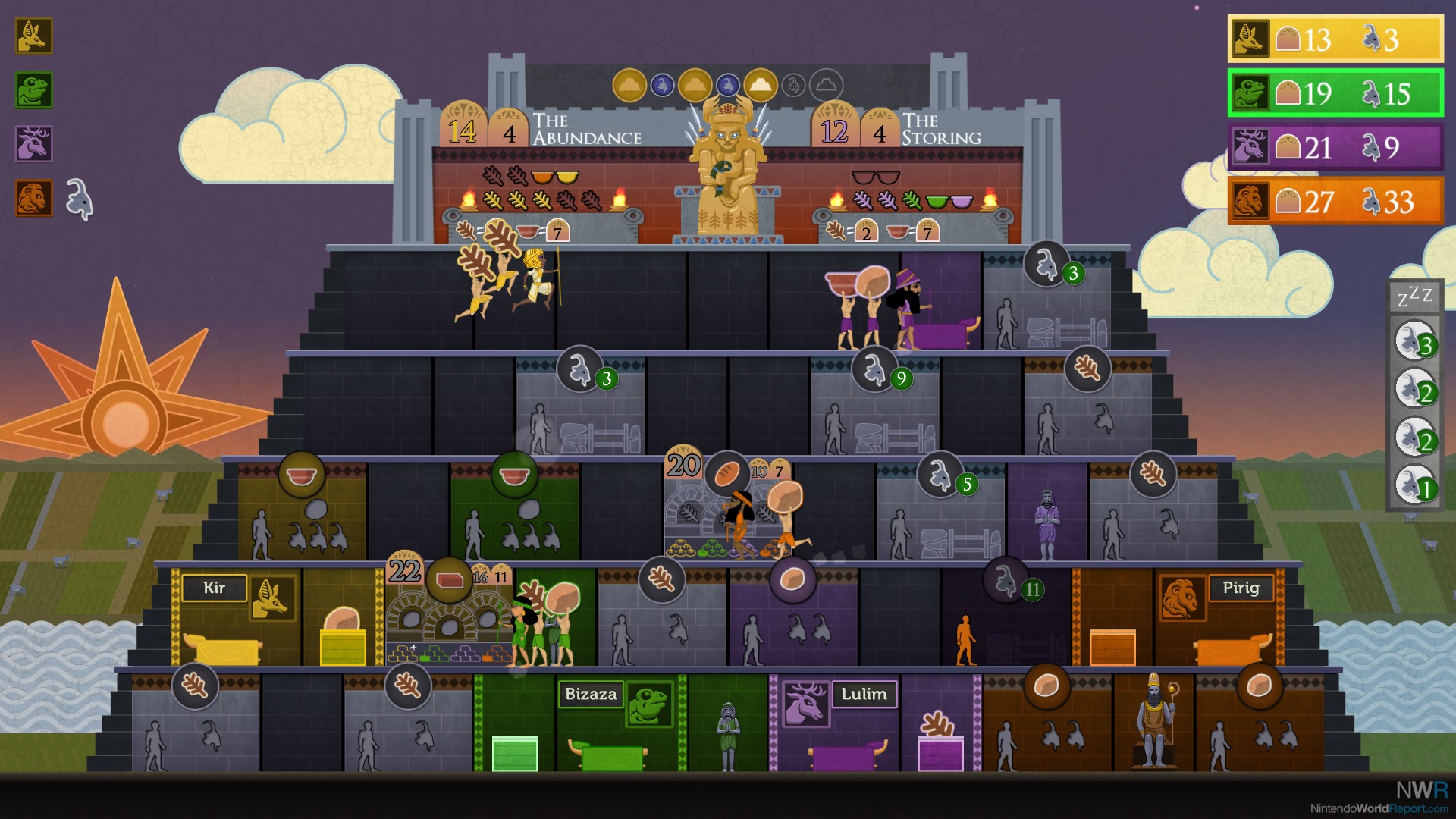 The basics are that four players are trying to please the Sumerian goddess Inanna across several years. It starts simply: at the start of each day, the player character has two workers to place in different spots around the ziggurat-shaped play area. In the first turn, the only options are to generate goats, which are currency used for actions, or make wheat, which can be sacrificed to the goddess. However, since all players go about their day at the same time, these days can turn into frantic platforming around the pyramid, thus bringing in a more video game-like mechanic into a board game style. From there, the complexity increases. Years act as rounds, ending when the two sacrifices for the goddess are fulfilled. To complete those, goods such as wheat, pottery, and beer must be sacrificed. Whichever player sacrifices the most earns points and the last player to sacrifice something earns points as well. In addition, points are earned in a variety of different ways, including supplying the bakery in the middle of the ziggurat and just sacrificing goods in general.

When a year ends, the auction phase takes over. The goats that players carry over from the previous year are used to bid on items that are then placed on the board before the start of the next year. These items provide bonus points and more spaces to generate goods. In another digital touch, players just move the analog stick back and forth to bid on items, making it a competitive and potentially cruel auction system. You can act like you’re overbidding, only to quickly come all the way back to zero before the timer runs out to mess with others. Or you can attempt to snipe items from your competitors by just narrowly inching ahead of them. It’s a quick and overall small aspect of Sumer, but it’s a nice way to plot your strategy for the next year and regroup.

Play continues alternating between years and auctions until the selected years are all done. A three-year game generally runs about a half hour, while a six-year game can push past an hour. The customizable length makes for a good range of playtime.

Sumer also has a generally helpful tutorial built in as well as a straight-up rulebook a la board games. The game can be hard to grasp at first, but in my experiences, after the tutorial games, most people got it. Overall, the learning curve seems on par with the one for physical board games. It’s not instantaneous, but it’s not a burden.

The setup and design of this digital board game is fantastic, but it’s not as strong as a purely solo experience. Every game has to be played with four, so the AI are a mandatory player for any one, two, or three-player game. The AI is good enough, with different challenge levels that range from “will stand still for way too long” to “a golden god who will devour your soul.” I don’t find the Sumer single-player to be that strong, but playing with at least one other person is still a good time. Four players is definitely the ideal. While not available at launch, the developers are planning to add online multiplayer. I aim to revisit the game when that is added, but online could make this a far more viable single-player game.

Regardless, Sumer is spectacular, a unique digital board game promises to enter my personal board game rotation. It’s approachable whether you’ve played many in-depth tabletop games or if this is your first foray into the deeper board game world. The only snag is that it is at its best with other players. If you have the friends to play with, Sumer is a slam-dunk addition to your Switch collection.

Neal is a reviewing machine!