Come on grab your friends. We'll go to very distant lands with the Adventure Pals.

Irreverence can be a balancing act. When deployed effectively, it can be a hysterical benefit to any medium. When overdone or miscalculated, it can sully a promising venture. After playing through Massive Monster’s Kickstarted game The Adventure Pals, I’m not quite sure if they nailed that delicate balance in their vibrant world filled with fart noises, evil hot dogs, and a whirligig giraffe tongue, but they certainly made a really fun cartoony platformer. Whether you’re all in on occasionally overbearing goofiness or not, the fact is that The Adventure Pals is filled with a variety of clever ideas and depth that makes for a fine video game. 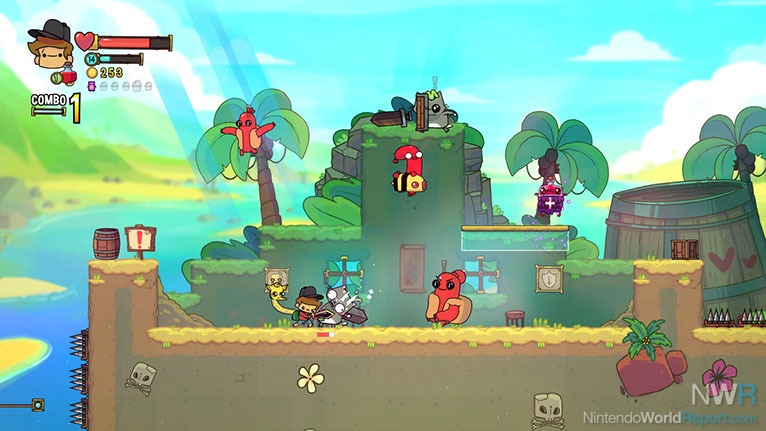 It starts off a little slow, but that seems like a deliberate decision since this wacky, colorful world is very much meant for children of all ages. You take control of a boy hero who is trying to save old people from being turned into hot dogs or some such and gets help from a giraffe named Sparkles and a rock named Mr. Rock. The gentle start was a little on the easy side for me, but for prospective child players, even those playing with a more experienced gamer in co-op, that early accessibility is welcome. It’s not like it becomes a masochistic platformer by the end, but the challenge does start to ramp up in the second of five worlds and continues to increase from that point on. Kirby is a fantastic comparison for the vibe, as it’s the sort of game where challenge isn’t necessarily at the forefront but it makes for a good time nonetheless.

A simple level-up system keeps doling out new buffs and abilities throughout the journey, usually giving you three options to choose from. I chose the path that wound up making Mr. Rock a wrecking machine who helped out in combat greatly. In what is generally an uncomplicated game, the leveling brings a nice touch of customization.

Each stage features five different levels filled with generally linear 2D platforming. Off the beaten path are stickers and cupcakes, the latter of which can be used to unlock new hats. The cosmetic touches are cute, but the linearity claws at one of The Adventure Pals’ shortcomings. It has the air of a more expansive adventure, but it’s just straightforward. Humorous flavor text sets up different quests, such as looking for something to make a self-conscious whale feel better about themselves or finding a farmer’s lost love, but all you have to do is complete the stage that you’re pointed towards to solve these problems. Fortunately the action stays fresh along the way, with a consistent dispersal of new twists and elements, including jump-boosting toasters, exploding blocks, and a variety of enemies. A distinct personality is cultivated, but it’s much more background than pertinent to the gameplay.

Regardless of the overall simplicity or the uncomplicated design, The Adventure Pals is a really charming platformer that is a joy to play whether by yourself or with a friend in co-op. It’s a lighthearted, jokey journey filled with a plethora of fun ideas that is eminently enjoyable, especially with a younger gamer.