The third time is the charm as Hyrule Warriors arrives on Nintendo Switch.

After completing all of Hyrule Warriors on Wii U, and then again on 3DS, I never imagined that I'd do the same for a third time on Switch. Under the moniker of Definitive Edition, this version bridges the gap between the Nintendo 3DS and Wii U releases. It adds everything that the smaller screen version offered, but allows you to experience it all on a television. For some, that might be enough to give this game yet another look. For most others, the mileage variance depends how much you played this game before.

If you never played it, Hyrule Warriors is a Warriors game with a Zelda skin. I fully admit that there is a lot more nuance to the proceedings, but that is what this game is. It embraces The Legend of Zelda lore in a way that is unique, and even flips it on its head sometimes. Link starts out as a soldier in a sea of many, raises to the occasion and becomes the one leading the charge. It feels oddly fitting to the Warriors experience, and raises the intrigue as you move along. With many familiar faces, it truly feels like a celebration of the franchise as a whole. This isn't something its follow-up, Fire Emblem Warriors, ever truly managed to do. 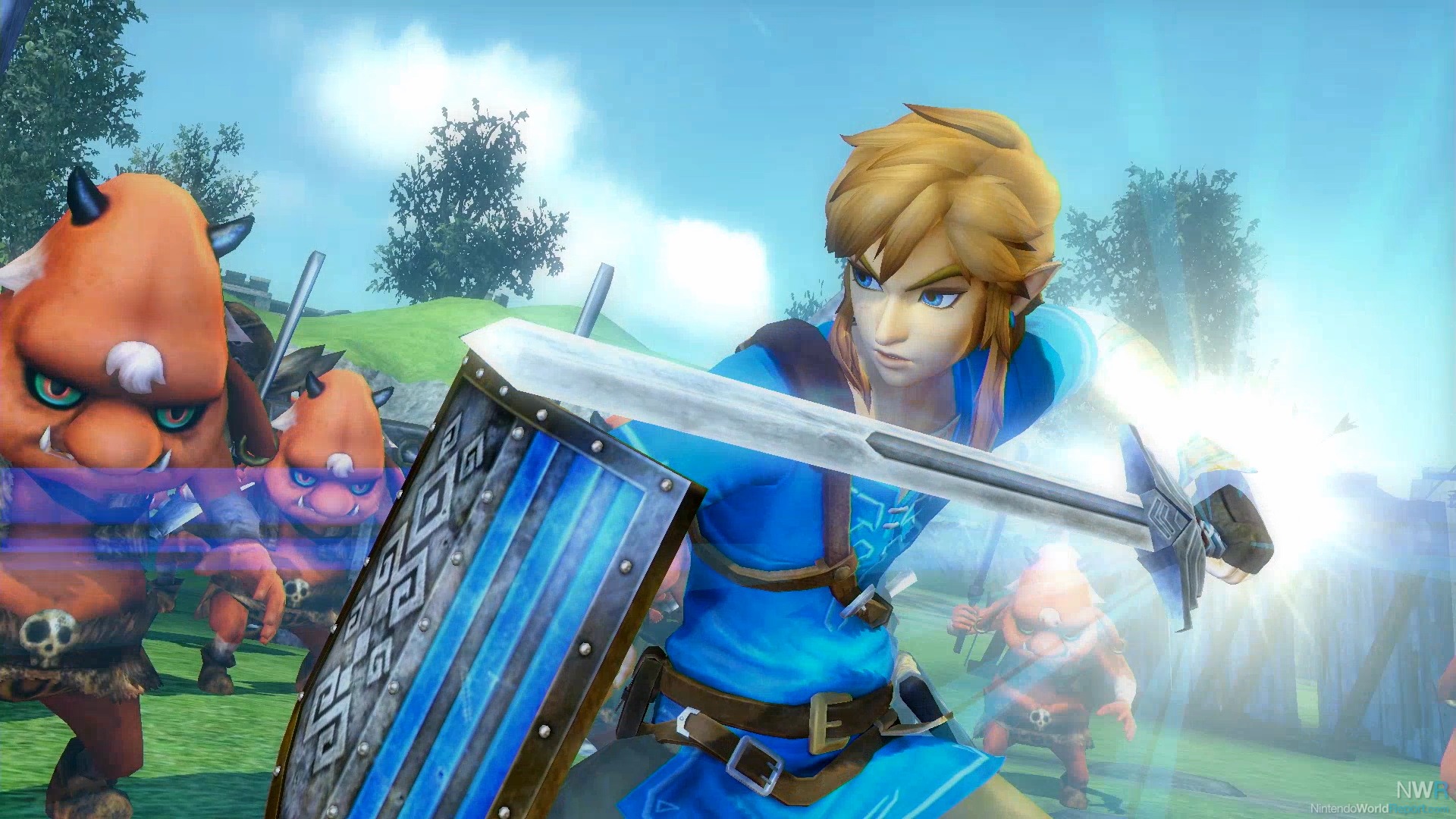 With simple button combinations and attractive action, you get some of the most refined gameplay in the Warriors franchise. While switching between light and strong attacks, you get satisfying combo results that are hardly unmatched. Of course, there are games that play just a tad cleaner, but the sheer amount of choice and possibilities hasn't changed. Due to the introduction of many characters and additional weapons, the game manages to play with your expectations. At some point, you might have expected to see every curve, but the Hyrule Warriors continues to pile on the ante. That being said, the changes in the formula don't come from the skill trees or material collecting, as they are par for the course.

The true colors come to show when you actually start playing the missions. It is here that the stacked roster and their attack configurations really shine through. The experience is all about going from point A to point B, destroying a bunch of foes and nailing item usage. It sees you throwing a boomerang or shooting an arrow to attack clever boss enemies. There is a lot of density in the missions, which ensures that there is barely a dull moment. Naturally, your end goal is to take over keeps and destroy a harsh enemy at the end. Hyrule Warriors continues to make the mission a struggle with enemies that attack claimed keeps, and sudden power struggles.

Since the introduction of the Nintendo 3DS version, the game has upped that ante even further. Similar to Fire Emblem Warriors, your characters now work in teams. You can quickly switch between them, and cover multiple ends of a map quickly. Next to this, it is possible to send AI controlled friends to locations and quickly take over. While the maps in Hyrule Warriors aren't as wide as in other Warriors games, the option makes the game constantly fun. In the missions where you happen to be alone, a blow on the Golden Ocarina can throw you to an activated Owl Statue. Finally, you have the fairies, which add new magical powers to the mix. From new abilities to powerful attacks, it can make your journey that tiny bit easier. 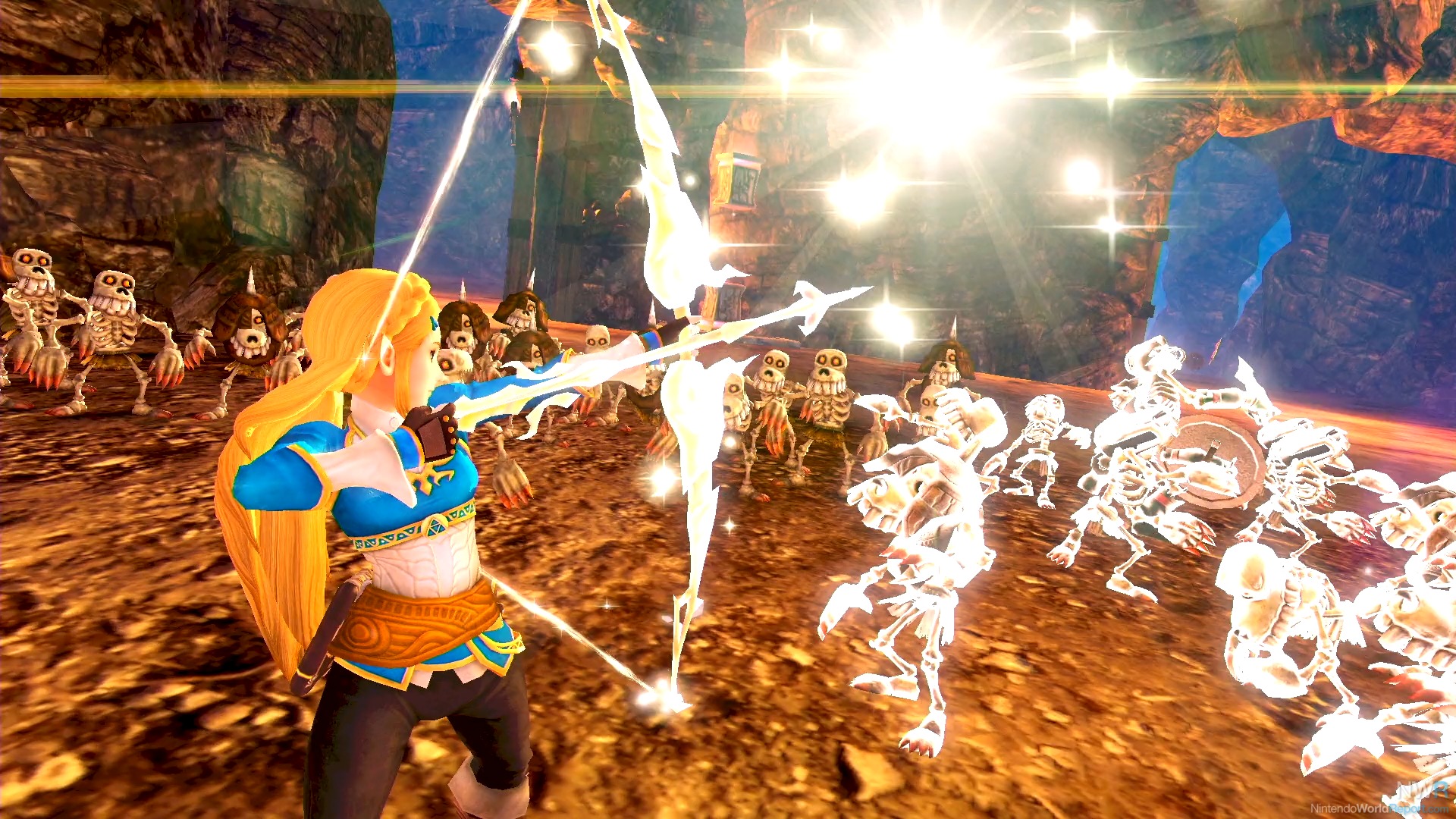 In terms of content, Hyrule Warriors: Definitive Edition is truly the best of both worlds. For starters, you now have the full Legend Mode experience. It includes the original story as well as the content that was added later, like Cia's Tale, previously part of a Wii U DLC pack. Next to that, the exclusive Nintendo 3DS Linkle and Wind Waker levels make their HD debut on Switch. While there is no visual difference when it comes to the missions, you do notice differences with the cutscenes. The fully animated tales have very different facial expressions, which did take me aback just a bit. That being said, everything about the story and its stages remain a lot of fun. The colorful cast of characters take you through a true Zelda power trip with keeps, objectives and a lot of turns. The hours fly by as Koei Tecmo throws in all the love it possibly can.

Another difference I should mention are the changes in unlocks. Unlike the two previous versions, Koei Tecmo has chosen to make Legend Mode less important. I mean, you will still need to unlock certain key items like the boomerang and hammer. Next to this, the first secondary weapons are still unlocked in this manner, making certain missions easier to complete. The actual journey, however, sees you unlocking costumes outside of the key elements required. After you finish the initial mission, 16 characters and two Breath of the Wild costumes will be immediately playable in all other modes. This will force you to upgrade characters by hand, which isn't something I fully appreciate. It is hard enough to unlock all the moves and options as is, so that additional layer wasn't needed.

While there are trinkets in Legend Mode, the true unlock grind can be found in Adventure Mode. This mode offers nine maps with various missions. Depending on your performance, these objective based levels can grant some pretty sweet stuff. It is here that you unlock alternative weapons, brand new characters and costumes that can be used anywhere. Interestingly enough, the adventure maps present are based on the Nintendo 3DS of the game. This makes them smaller in scope and less time consuming to complete. While they throw classic Zelda items and puzzles into the mix, Definitive Edition has streamlined that process significantly. By adding an item shop, previously used tools can be purchased on a whim. What helps is that these missions are pretty fun as well. Sometimes you beat a barrage of enemies, while others can be seen as a boss rush. The content is quick and engaging, which makes it perfect for on the go. 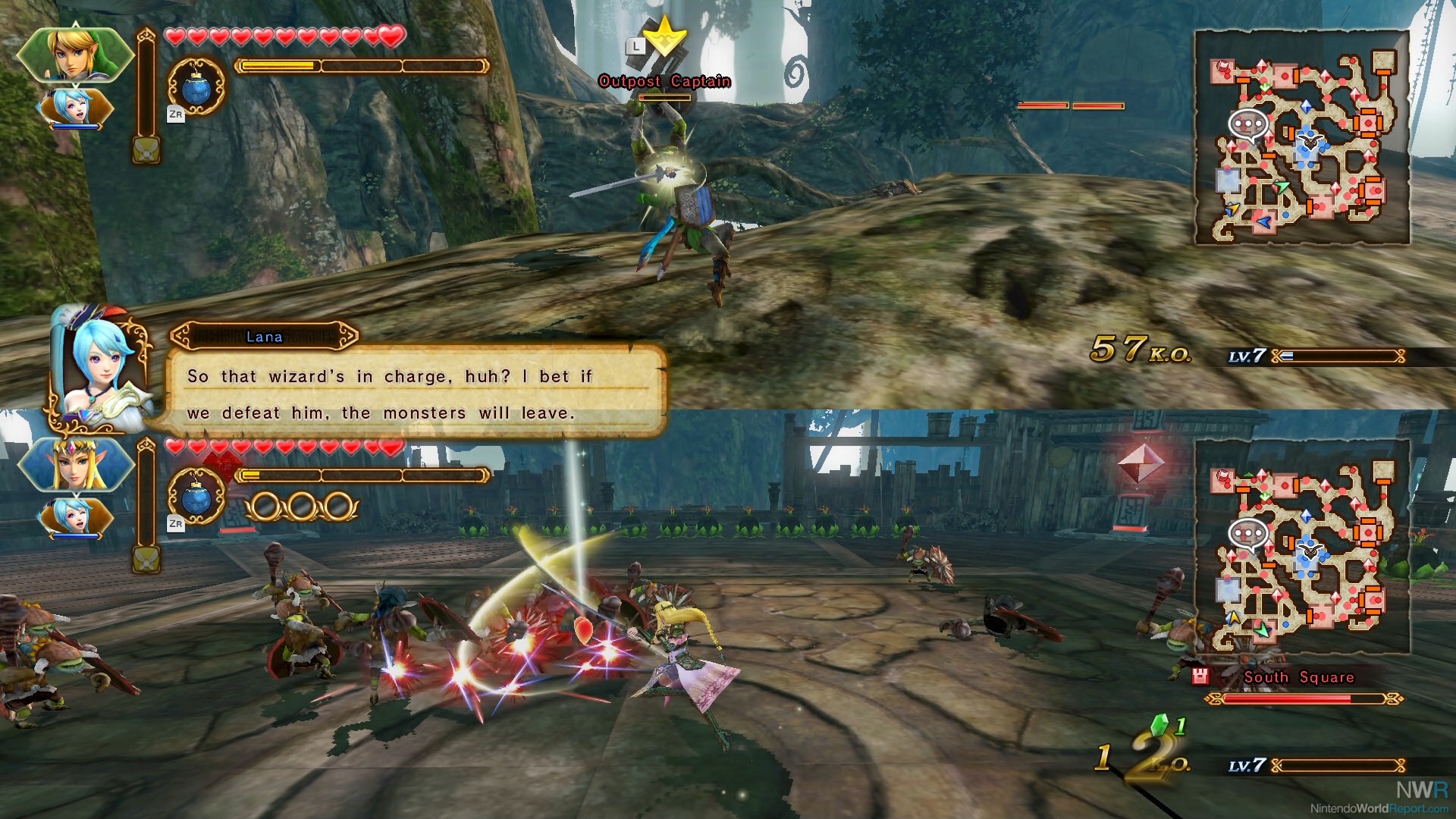 While it sounds like Hyrule Warriors: Definitive Edition is more based on the Nintendo 3DS version, there are elements from the Wii U game returning too. The bigger one present is the Challenge Mode, which offers new and exciting battle scenarios for you to complete. You will fight as Beast Ganon, defeat a certain amount of enemies or restrict yourself by only attacking in certain ways. Another sees you completing a battle as fast as you possibly can, asking you to nail down combos without fault. Just like the Adventure Mode, these are ranked and will result in you receiving a reward or two.

The Wii U's co-op option returns as well, and it is mostly improved. The original game suffered from a lot of pop in, which is no longer the case here. The two characters on screen can move separately from each other and the game has no problems keeping up. I did notice a slight reduction in the amount of enemies, which was a bummer in my book. While there is plenty to like about the co-op now, I did observe some glitches. Hyrule Warriors sometimes had a mind of its own, and started to throw enemies into mid-air. They would be stuck there until the end of the mission with nowhere to go. At first, we thought that we fell through the floor, but that luckily wasn't the case. These are really minor problems, and the experience in general ends up being a lot more playable.

I was incredibly impressed with how Hyrule Warriors: Definitive Edition performs. While it doesn't have the options of Fire Emblem Warriors, the game seems to run almost flawlessly. In both the Wii U and Nintendo 3DS games, Hyrule Warriors suffered some harsh framerate dips which are fully eliminated on Switch. There are no harsh dips, even in handheld mode, and the game is still the colorful journey it has been those many years ago. If you are in need of something fun anywhere you want, this will keep you occupied way too many hours on end.

All in all, I am happy that I played through Hyrule Warriors again. The experience is a lot of fun, and the scenarios are incredibly diverse. While Legend Mode did take a hit, it is a small misstep all things considered. The levels and missions are the game's main attraction, and they deliver to a grand degree. The game sucked hours away without me even noticing, which is the best outcome I could've hoped for. While I wish that the co-op's problems were fully ironed out by now, you can't help but feel that you're getting a lot of good in return.

How is the split screen co-op? That’s the one down-side to me. My son and I played this together on Wii U and I loved that we didn’t have to do split screen.