Bribe your enemies effectively to restore your family’s legacy in this quirky beat-’em-up.

Certain genres can be tied down to popular conventions over the years. Platformers all riffed off of Mario. Fighting games aped Street Fighter for a long time. Beat-’em-ups often fall into a similar trap, even more so because the core action is a few buttons to punch and kick. Penny-Punching Princess from NIS America tries to break past that staid style with a humorous hook. While your royal heroine mostly gets by with the brute force of light and heavy attacks, she also has a calculator that can be used to bribe enemies and turn them against their brethren. It’s a dopey adventure, complete with a lot of digs at capitalism and lending. The core is sound, but some convoluted controls combine with an emphasis on grinding to make this more of a middle-class experience than a rich upper-crust one.

The title character’s kingly father let his kingdom fall into ruin and be overtaken by the money-savvy Dragoloan family. Starting from nothing, the princess punches the crap out of all who stand in her way as she tries to restore her family’s legacy. The writing is consistently goofy, but after a while I started to tune it out. The character portrait cutscenes aren’t very engaging, though I do appreciate the weird voice-over narration that comes through now and then. All of this weirdness does set a light-hearted tone and the silly puns are endearing.

Penny-Punching Princess is split into chapters that segmented into stages, consisting of light exploration and a handful of defined battles. For the most part, the stages move quickly, but too often, I ran into issues where I’d be locked into an extraneous and super challenging battle or stuck at a mid-level checkpoint with very little health and no hopes of progressing outside of flawless play or inevitably restarting the entire stage. Death’s penalty is merely kicking you back to the last checkpoint, but you do lose all of the bribed enemies and traps you’ve acquired. In a game already beset by repetition, these moments are rough. 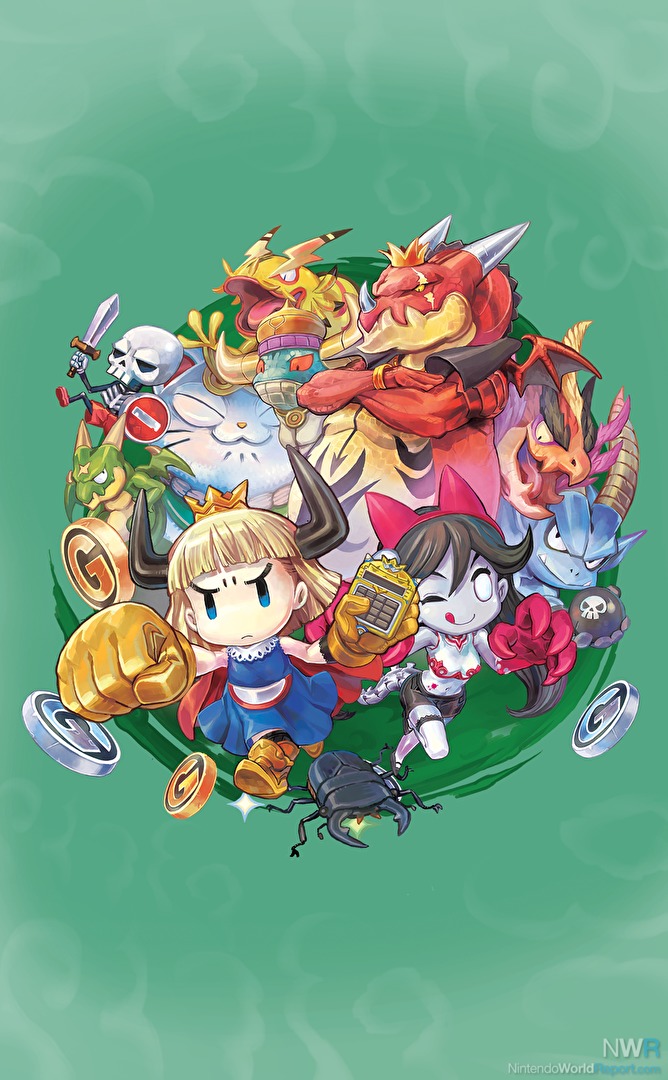 The way the bribes work is that, at the press of a button, you bring up an on-screen calculator controlled by the D-pad or touch controls. Punching in a number then lets you bribe an enemy. Each one has a specific amount but you can try your luck at lowballing them. When bribed, the enemy or trap can be used to damage other enemies or saved for populating your growing kingdom after finishing up the stage. It’s an active and engaging system, but it does add a lot of complications to battles. The calculator pops up in real-time, so it obscures the screen. On top of that, it’s tricky to pick exactly who you want to bribe. My preferred method was primarily using the “auto-bribe” option that lets you just buy off an enemy at their list price. It was quicker and resulted in far less frustrating deaths. I still picked the wrong sucker far too often, which becomes an annoying issue when you’re trying to grind for specific foes. Also you’re vulnerable when crunching numbers, so combat regularly boils down to escaping the pursuing force and frantically trying to bribe the right trap. Nailing a series of traps to fell enemies feels great, but when you hit failure, it’s generally because the controls got in the way or the camera’s too tight on the action for you to see incoming enemies.

In addition to being used in battle, the enemies can also be gathered to buy new weapons and items. The weapons boost your abilities and offer certain special attacks and buffs. The items can unlock more skill points, used to permanently acquire higher stats and improved bonuses. A certain amount of enemies need to be bribed to unlock these various useful tools, and while it is easy to find out where different foes are found, it can be aggravating to actually get to them. The best bet is to just bribe as often as possible with as much variety as possible so that way you minimize the need to grind for specific ones.

The action skews hard, but it’s not unbearable. The challenge lies in making effective use of enemies and traps against larger foes. Bosses are especially tough since they can’t be bribed. A camera that’s zoomed in a little too closely combines with the large size of bosses to make those battles tough to navigate, which can make for laborious and unexciting moments. The more interesting fights were the mid-boss-ish encounters with harder enemies.

Penny-Punching Princess might have its issues, but it’s a nice lightweight brawler that mixes together quick levels and a focus on grinding for items to make for a good home and portable experience on Switch, even if sometimes that expedient pace can be thwarted by some choke points. The issues might drag it down overall, but enough clever ideas make this a game worth checking out, as long as you’re not that much in debt to the Dragoloans.