Need a mech to save your city? Better call Saul.

Although the Switch has a fair number of RPGs to its name coming into the second year, the so-called “third-person looter” genre has been relatively untapped. Arc System Works is attempting to bolster the selection with Damascus Gear: Operation Tokyo, which debuted on PlayStation systems in 2016. Adding giant robots to anything is usually a recipe for success, and Damascus Gear is a good base game that can use a lot of refinement. 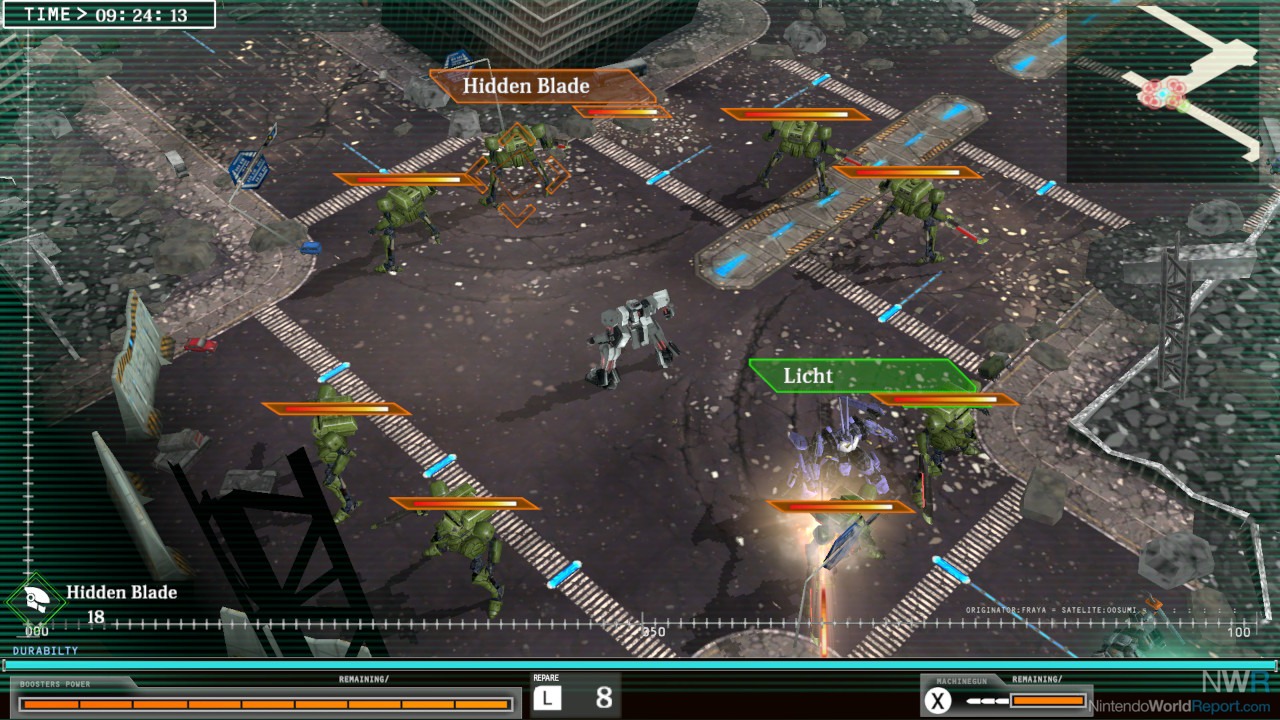 The story is one that has been shown in untold forms of Japanese entertainment: Tokyo is toast. Out-of-control mechs known as RAGE have wiped out 80% of the human race in two weeks. The player is tasked with piloting a mech known as a GEAR in order to defend what’s left of the ruined capital city through missions of increasing difficulty (ranging from training to SS-rank), picking up parts from wrecked RAGE along the way to improve the GEAR. Characters are introduced rapid fire, but aside from the mission control most of the early characters clearly don’t want to be involved. I found myself rapid-firing through the pre-mission sequences, stopping only to pick up the objective for that mission. The lethargy carried over to the battles, where the AI seems to want you to steal kills since they never kill anything.

Damascus Gear shines when on the battlefield. I found the controls easy to pick up, even with three attack buttons (Y, X, and B by default). Beating down the enemy mechs causes items to drop, which can be picked up either by moving over them or hitting a shoulder button to sweep the area for all of the loot. Missions are dealt with quickly; the longest mission for most of the game is 10 minutes, and the ending can easily be nailed in 10-15 hours. After the mission, it shifts to a dock where the new parts can be compared and either equipped, held, or sold. Most of the game will be spent in dock, deciding whether a big boost to attack is worth foregoing other benefits like fuel economy. Further customization is available by changing the GEAR’s color, though I didn’t paint my mech red to make it run at triple speed.

If the wrecked city aesthetic is appealing, then Damascus Gear is in your wheelhouse. After the training missions are done, a lot of time is spent in a city that hasn’t been able to rebuild itself. The mech designs only cycle through a couple of sizes, and I wound up with a lower mission rank plenty of times because I had to kill one type of RAGE and an identically colored and sized one was on the map. The audio is incredibly loud; even with my TV set to 10% I still had to turn the sound effects and music down to 50% in-game. And I’m glad I did, because it was mediocre at best and painful at worst.

Damascus Gear: Operation Tokyo is a good first attempt at a loot mech game from Arc. I think some of the issues could be worked out in a sequel, which coincidentally - or not - launched just after the Switch release of Operation Tokyo. It plays well on a handheld with the short missions, just pop the volume down a bit and move the headphones over to something else.