Even with rough edges, the hook here is a winning one.

You can build a hell of a video game off a single good hook. And that’s, quite literally, just what Tribute Games did with their 2017 release Flinthook, which is now available on the Switch. Flinthook builds a nice roguelite experience around a dynamite grappling hook mechanic. That base leads to great platforming and fantastic movement, but enough misses, ranging from a confusing perks system to little visual variety, add up to it being a good but not great overall experience. 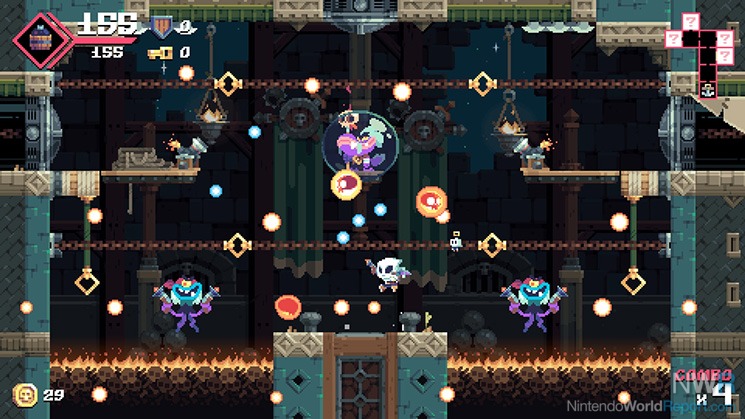 Flinthook is split into several bounties, which put your grappling hook-wielding hero through several procedurally generated ships, looking for the right fuel for Slimey, the weird-looking living compass, to find the boss. Each ship features a difficulty level and variants and aside from when you’re heading for the boss, three ships are always available to choose from. The variants hint at a focus on combat with different enemy types, tease a plethora of shops, or even threaten a broken map. Some of the names for these variations are a little too vague and as far as I could tell, nothing in game lets you find out exactly what they mean. Still, exploring what each one is and taking a risk on a difficult one where you’re not sure of what’s lurking inside gets exciting at times. That excitement ramps up as you get a grasp on the flow of movement, as it’s possible to zip around the screen through mastery of the grappling hook, jumping, and other mechanics, such as the ability to temporarily slow down time.

When in a ship the goal is to find a large treasure chest, usually lurking behind a mini-boss room. Along the way, the ship can be explored to fight enemies, earn gold, collect items, earn experience, and more. The ships don’t normally last too long, but every so often one ship might outlast its welcome. The procedural design will occasionally lead you into some incidental hellscapes that will, as is the roguelike way, often lead to a lot of cruel deaths. The bosses have to be defeated in one run, so it soon becomes a grand challenge to get through the three or more ships and make it to the boss alive. It’s repetitive in that regard, but it’s also addicting. 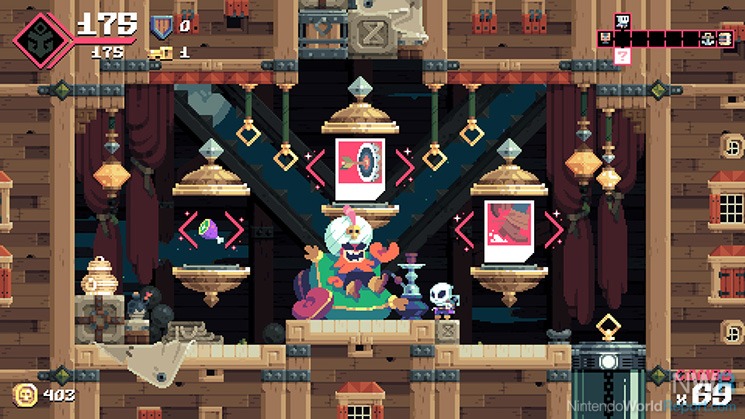 Death brings you back to the start, but with experience points and gems. Experience leads to level-ups, which unlock new perks. The gems can be used to buy new perks, health additions, and more. The perk system is a tough nut to navigate. With level ups being frequent, you often earn multiples of the same perk and everything is laid out in a single horizontal scrolling list. Unlike the variants, their explanations are plain and simple, but it’s still tough to sift through everything. The disparity between the amount of perks you can earn and buy and what you can use at one time is also way off. At a certain point, I basically just ignored the majority of my available perks.

The variety throughout the five bounties (along with even harder versions of those bounties) is found in the ship variants and increasing difficulty, not so much in visuals. Fortunately, the visuals are gorgeously designed pixel art, but even that lovely sheen becomes par for the course when you’re staring at the same space pirate ship style. New enemies crop up through the progression, and the array of bosses and mini-bosses are mostly excellent. The lack of visual diversity isn’t detrimental to the experience, but in a game filled with repetition, it can wear thin over many hours.

Also included are daily and weekly challenges, providing the same experience for all players online. These lack bosses and instead score you on a variety of factors ranging from completion time to enemies killed. Online leaderboards weren’t populated when I played, but the options to sort between worldwide and friends means you can compete with everyone or just your pals.

Flinthook has a sound base, complete with an excellent grappling hook mechanic and a distinctive, fun mode of movement. The roguelite design leads to some repetition, but the gorgeous art and great style (even in the face of well-worn scenery) helps make up for that and other shortcomings. Be prepared to die a lot, but if it clicks for you, be prepared to want to jump right back in for another go. That’s what happened to me, and I had a fantastic time with Flinthook in spite of bothersome issues.