Retro style games are becoming quite common, almost to the point of being as common as first person shooters. Superola and the Lost Burgers is one of those games, and in typical retro fashion it pulls inspiration from games of the past. The problem with Superola, however, is that the inspiration turns more into a cruel joke than anything. 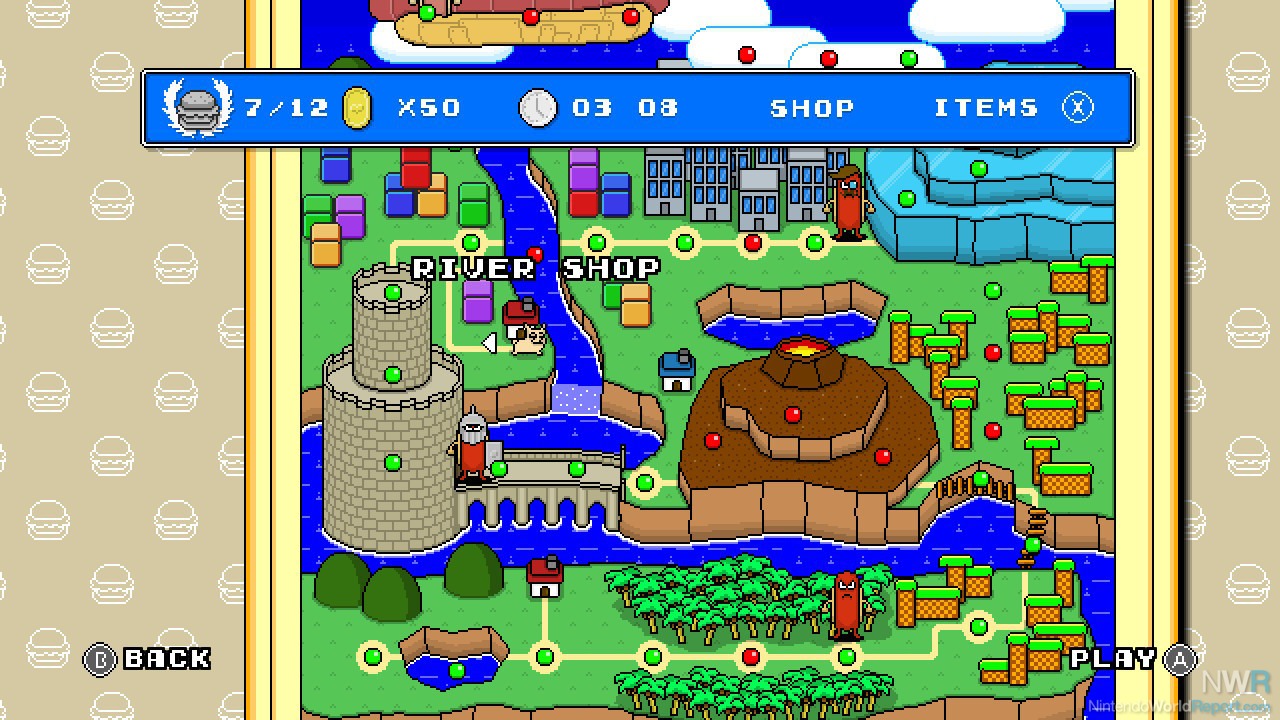 At its core Superola is an endless runner. This initially took me off guard because as soon as you boot it up the game reminds you of Super Mario World. The world map looks like a direct copy, and even the background imagery of the starting levels is very reminiscent of the start of Mario World. You play as Superola, a hamburger loving llama, who is trying to save all the burgers in the land from a hot dog alien.

The gameplay is pretty standard for an endless runner. Superola automatically runs to the right and your job is to jump over enemies and obstacles or blast them out of the way with your “kill all” face laser. This power kills anything it comes in contact with, however lasts only a few seconds. It is not unlimited either, as burgers are strewn throughout the level that act as ammunition. The flip side to the burgers is that if you don’t use the laser, those burgers turn into coins at the end of the level which gives you a chance to buy additional power ups at the store. Power ups also can be obtained at the end of each level by jumping into a spinning icon akin to Super Mario 3. Some give you extra time on the laser, and some give you a double jump. They do help a little, but aren't really a game changer. 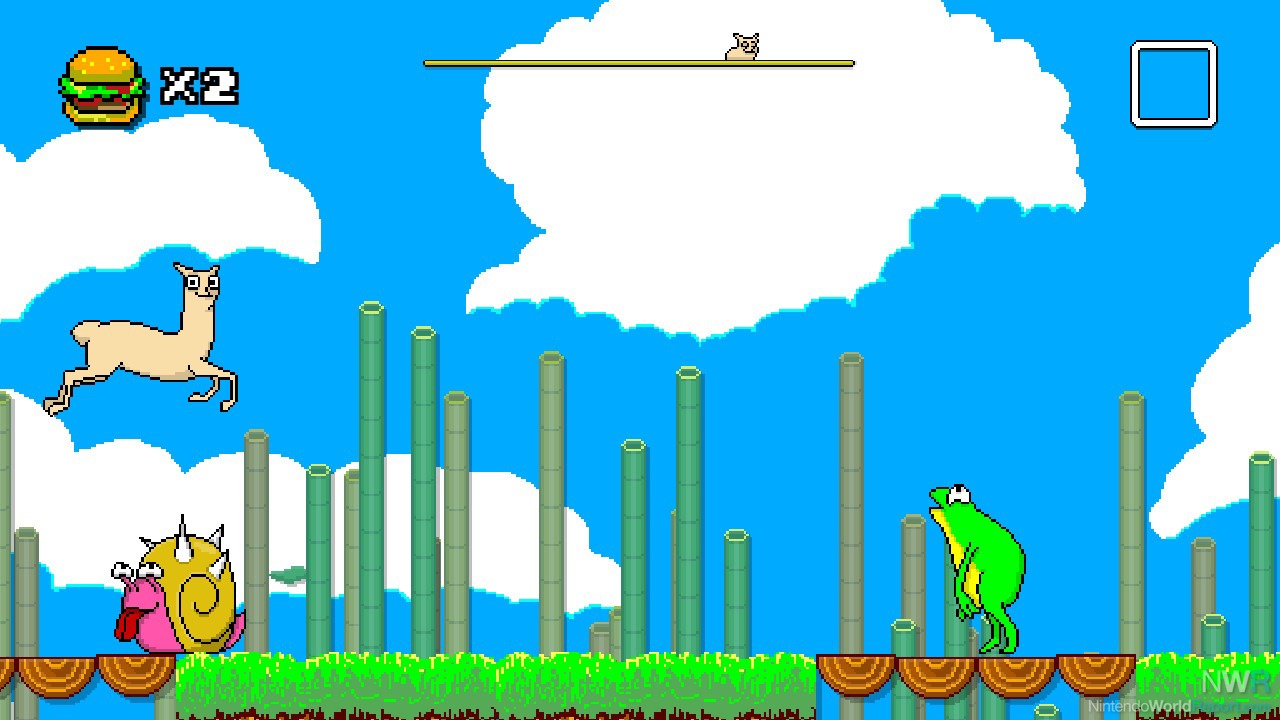 The story is really unnecessary, and playing through the levels can sometimes be a chore as the designs don’t change much. Most levels are above ground and play the same just with slightly different heights on the platforms that you may have to jump to. Sometimes you go under water and instead of a regular jump; you need to stay afloat so you don’t hit the spikes at the bottom. Undercoders definitely had some fun with this title. The game and pop culture references are around every corner. On top of Mario, tributes to Street Fighter 2, Zelda, Sonic the Hedgehog and the Big Bang Theory all make an appearance. After a few stages you can get a bonus stage which is just destroying a car just like in Street Fighter. The end level point screen is a direct pull from Sonic’s, and finally when you fight a mini boss, you don’t actually fight but play a honest-to-goodness game of Rock, Paper, Scissors, Lizard, Spock. It seems like fun at first but it seems to be random, so if you happen to lose in the battle, you need to play the level all over again. 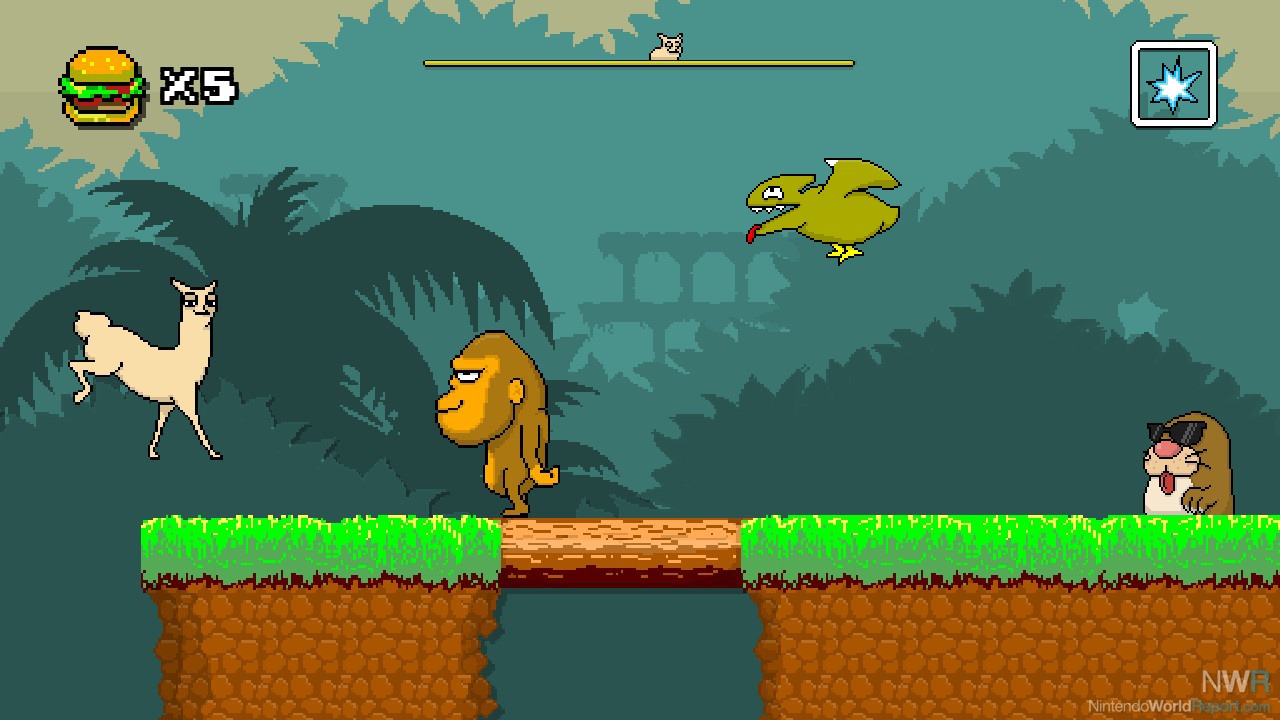 The levels are short and sweet, but the random difficulty spikes in some early levels were frustrating. It doesn’t help that the art style is painful to look at. It reminded me of a cheap web browser game. The music unfortunately is repetitive and uninspired as well. There is a bright spot, however and that is the controls. Jumps and laser blasts are very responsive and if I made a mistake and hit an obstacle it was more of my timing or lack of ammo. The game does have a few extra modes, which are Endless Mode and a two-player vs. mode, but the two player mode is just endless mode for two people. Neither is really worth playing for more than a few minutes.

Superola and the Lost Burgers is disappointing. It has and initial appeal based on its inspiration but fails in the execution. I would run away from this game as fast as you can.