Dragon Quest Builders is one of the more interesting games I've played this year. It takes the charm of a mainline Dragon Quest RPG, but throws it into a brand new mold. This mold sees the player making tools, exploring, and building up towns. While combat is present, it is nowhere near the focus of the journey. The drive to solve quests in this world bring new mechanics, more intrigue than a Minecraft game, and above all, a grimmer reality. This isn't the most well rounded of adventures, but it is still one that entertains all the way through.

Builders throws you into an alternative version of Alefgard, the world of the original Dragon Quest. In this reality, the dreadful Dragonlord has destroyed the world and plunged it into chaos. Alefgard's inhabitants were forced to live next to the remains of their destroyed towns with no place to keep themselves safe. That’s where you come in as the legendary builder. These civillains need to rely on the help of that builder, who will be able to set everything right in the world. Don't call him or her a hero though as Dragon Quest Builders emphasises that he or she shouldn't be called one. Regardless of that though, the job of this brave individual is to rebuild the world and recreate four distinct locations. 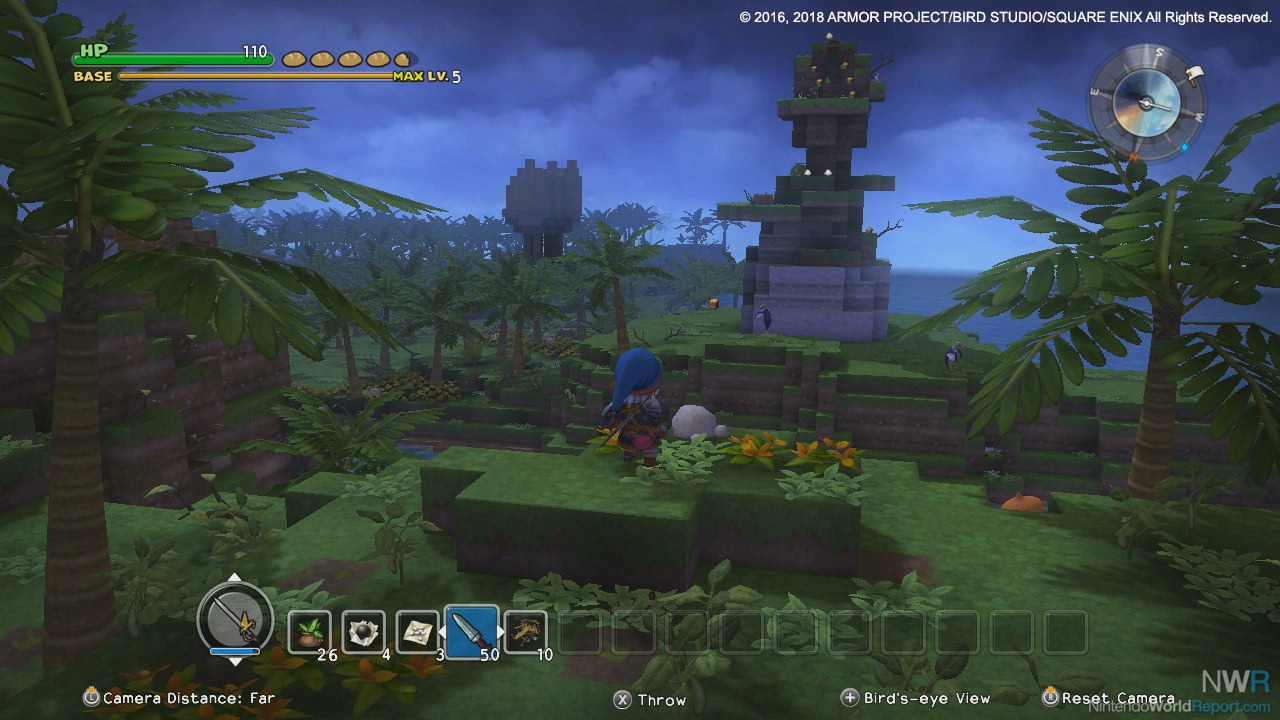 The best part about Builders is honestly the writing. The Dragon Quest series is known for its rather hilarious and enjoyable dialogue, and that hasn't changed here. The dialogue is what will pushes you through to get the most fun out of it. As you build up a town from zero, humans come towards you as they search for refuge. Completing quests for them makes up a bulk of the experience, and most of them task you with searching for materials or people. A good chunk of the adventure is filled with reading those boxes of text, and Builders knows how to keep you engaged. Apparently, you are the only one who can combine items or build. The people have forgotten what the word ''build'' even means.

As you can read, Dragon Quest Builders focuses a lot on plot. Now you could be fooled into believing that the game is pretty linear, and that isn't an unreasonable suggestion. The character that you create stays mostly the same, all while the materials and towns are the changing factors here. What doesn't help matters is that the main quest locations get stamped with a big Q on the map. Luckily, each chapter features a slew of side quests to enjoy, which can be completed in any way you like. All four locations are their own chapter with rules, ways to obtain items and changes to the overall gameplay loop.

The gameplay loop isn't hard to understand. It starts with accepting quests, leading you to gather materials and more to complete them. At the start, the materials are easy to get, ’making it easy to adjust to the game’s ideas. Next to the materials, new houses or structures might need to be built. Clearing certain areas leave an indelible mark on the world.. While on the main journey, the chapters are filled with the Darklord's minions wrecking havoc. The minions can be punishing, even when your hero is fully equipped with upgraded gear. That being said, death never comes with a harsh penalty. Some items are lost and the quest begins anew from the last location that was being built up. 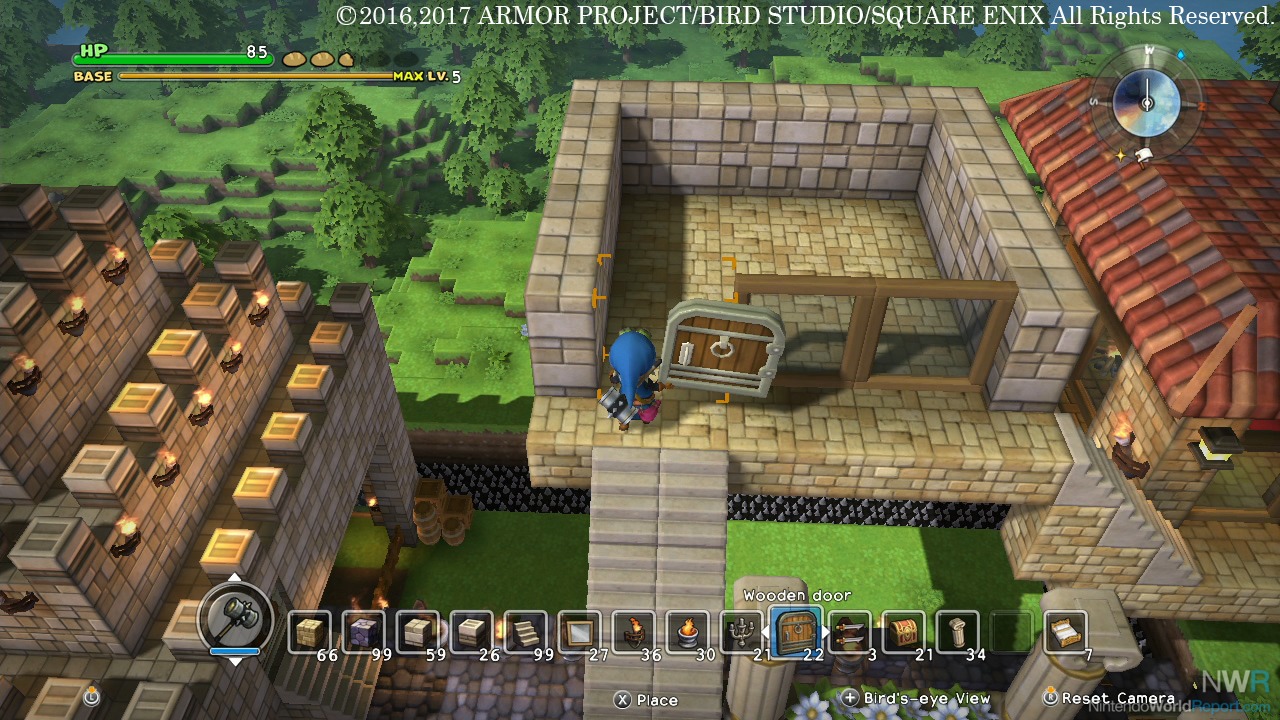 While the combat mechanics mostly never annoyed me, it simply comes down to swiping your weapon back and forth. The real frustration, however, comes at the end of a chapter. The end-area bosses can only be defeated by using unique weapns that require quite rare materials so they can be crafted. I didn't like how you had to go out of your way, simply for these moments. After that, you still aren't done. Each boss has a specific way to be defeated, adding a new layer of frustration.

Better than combat is the crafting. In some instances, a blueprint with specific rules on what should be placed within can be found, making it self-explanatory. It is one way how Dragon Quest Builders keeps you in check, and forces you to play within its boundaries. While the building and placement is your standard building game fare, the way that the towns develop and what you use is vastly different. Progression doesn't carry over from one chapter to the next and at every beginning, the slate is wiped clean. From collecting plants to mostly mining, each chapter has its own specialities to keep the building aspect alive and unique. By building a lot, your town will grow in level and open up even further.

Next to building up towns, the inhabitants need their own specific items. It’s not uncommon to see a new ally ask for some medicine or simply a bed to sleep on. Regardless of what the quest is, more important are the rewards. These quests can offer new workshop recipes or more materials. If you're getting sick of playing by the rules of the story, the Terra Incognita, unlocked after the first chapter, is essentially a free-build mode. It expands with every completed chapter, and features no enemy resistance. Just a pure creative outlet. 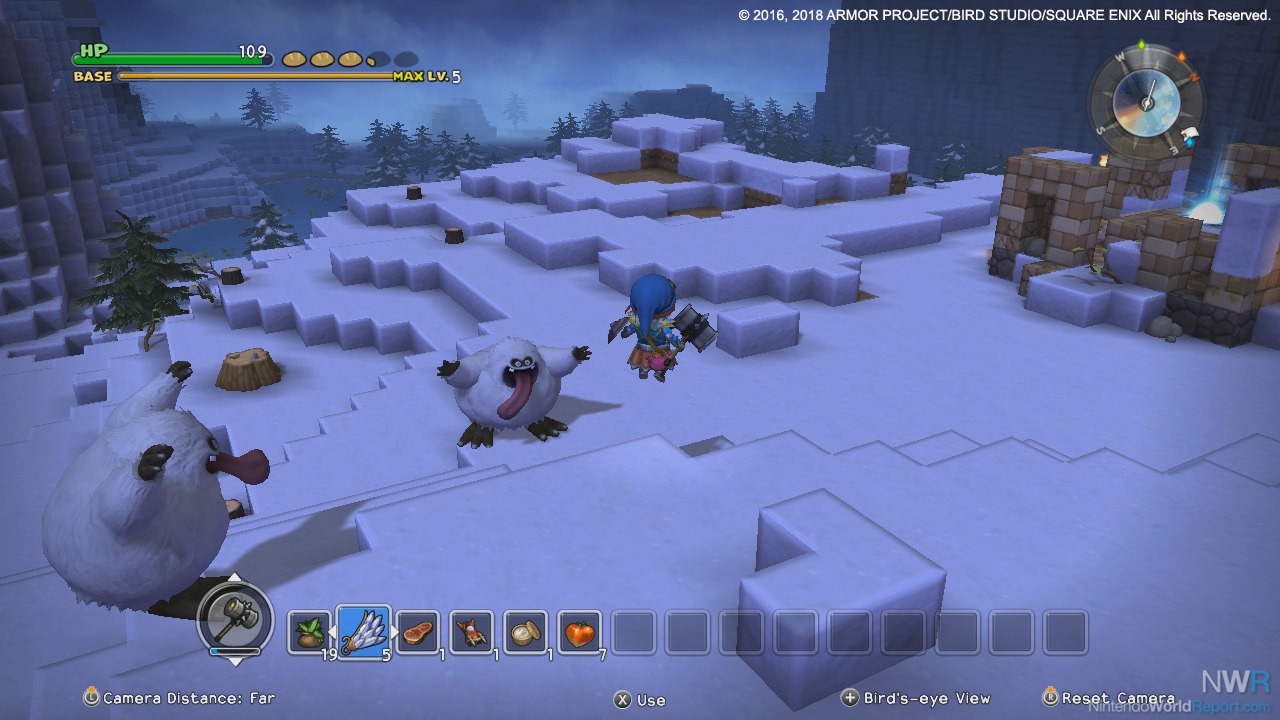 Dragon Quest Builders looks real good on the Nintendo Switch. The nice presentation brings sharp visuals and an incredibly charming style to the platform. The world is entirely built out of voxels, which adds to the retro feel. Regardless of how you are playing Dragon Quest Builders, the camera is good for the most part. The third-person or overhead camera views work excellent, but the first-person mode stinks in tight places. It feels really cramped, and provides poor directional guidance. The music isn't anything to write home about. It is fine in smaller chunks, but after a while, I found myself putting on different music while I played.

Sadly, another disappointing factor is that almost no features of the Nintendo Switch are being used. You can take the game with you, and that is about all the extra content you are truly getting. Well okay, you can find a Great Sabrecub and collect retro-styled items, but it ultimately added little. I would've perferred touchscreen controls as this seemed like a match made in heaven.

Dragon Quest Builders as a package is all kinds of fun. The way you build up towns and explore the worlds is a true time sink for many hours. I found myself constantly looking for materials, quests, or items to push towards a 100% completion. That doesn't mean everything is grand, mind you. The lack of significant updates to the camera or bosses left me sour more than I would like to admit. These problems can be forgiven in time, but the smaller chapters constantly offer clear reminders of the problems. The Switch version offers little in the way of notable exclusive content, but playing it in handheld does make the proposition an easier one. The free-build mode seems like the ideal way to play Builders, and that is more than enough for me.

The demo totally sold me on this game. Im looking forward to getting it tomorrow

I will be picking this up as well. The Demo was fantastic!