Lots of salt will be spilled in this difficult Metroid-style game with unique movement.

A first impression goes a long way for a game. Dandara, from Raw Fury and Long Hat House, makes a mystifying first impression. A short prelude sets up the heroine Dandara who is trying to help the world of Salt. Then, you’re given control. She moves weirdly - dashing between surfaces in lieu of deliberate jumping - as the disquieting graphics and sound wash over you in subtle ways. From those first moments, the style is set, and even through ups and downs, the distinctive vibe wins the day, with all due respect to the well-designed levels and puzzles.

Dandara has the structure of a Metroidvania but twists come out through the funky, weird movement. Normal jumping doesn’t happen here, instead you dash through the air between clearly defined surfaces. The movement is flexible; an arrow points to your destination, moved by the analog stick. You can’t jump into nothingness and even if you’re pointing farther to the side, you’ll snap to a landable surface. Sometimes it snaps to the wrong platform when you’re going fast, but in general, movement is rhythmic and elegant, especially when set to the chill, scene-setting music and pixelated art. 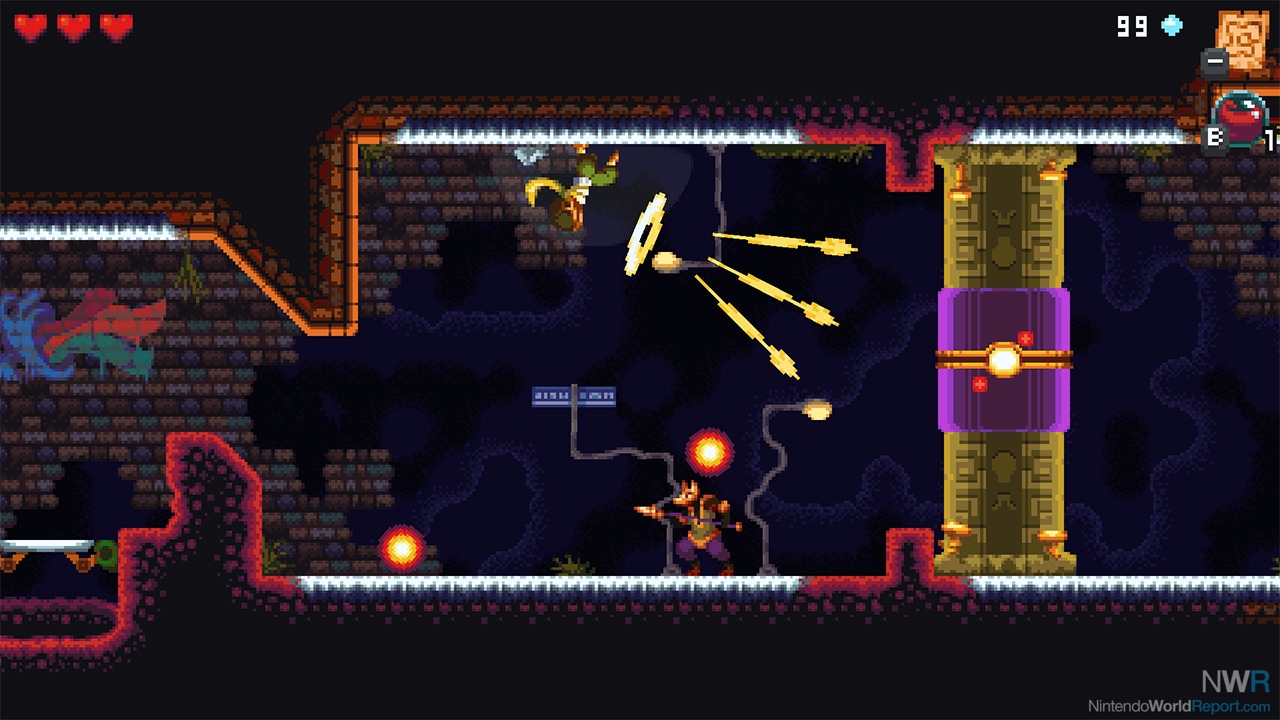 During exploration and less strenuous combat scenarios, the controls and movement are freeing and fun. When the action gets frantic, that flexibility of dashing becomes an enemy in and of itself. Far too often, quick movement led me to certain doom, landing on an enemy when I meant to go to a farther surface or jumping into a projectile when I meant to skirt around it. While some of the difficult sections are rewarding when you master the nuances of movement, too often I felt like I was at war with Dandara’s maneuverability. It felt akin to some Wii-era complaints of motion controls because sure, the twist is novel, but when the novelty wears off, it regularly can’t contend with traditional movement.

Combat’s quirks also complicate these tense moments. Dandara must charge to fire her basic projectile, which aims like the air dashing. More weaponry is accumulated through the adventure that provides more firepower, but it’s restricted to limited usage via a meter. The variety of these weapons are what opens up the combat in the later portions. At first, you get simple missiles, which pack a punch and can also be used to break certain barriers. I do wish there was more room to specifically experiment with the weapons, as I often got them and was afraid to use them since I didn’t know exactly what they did. 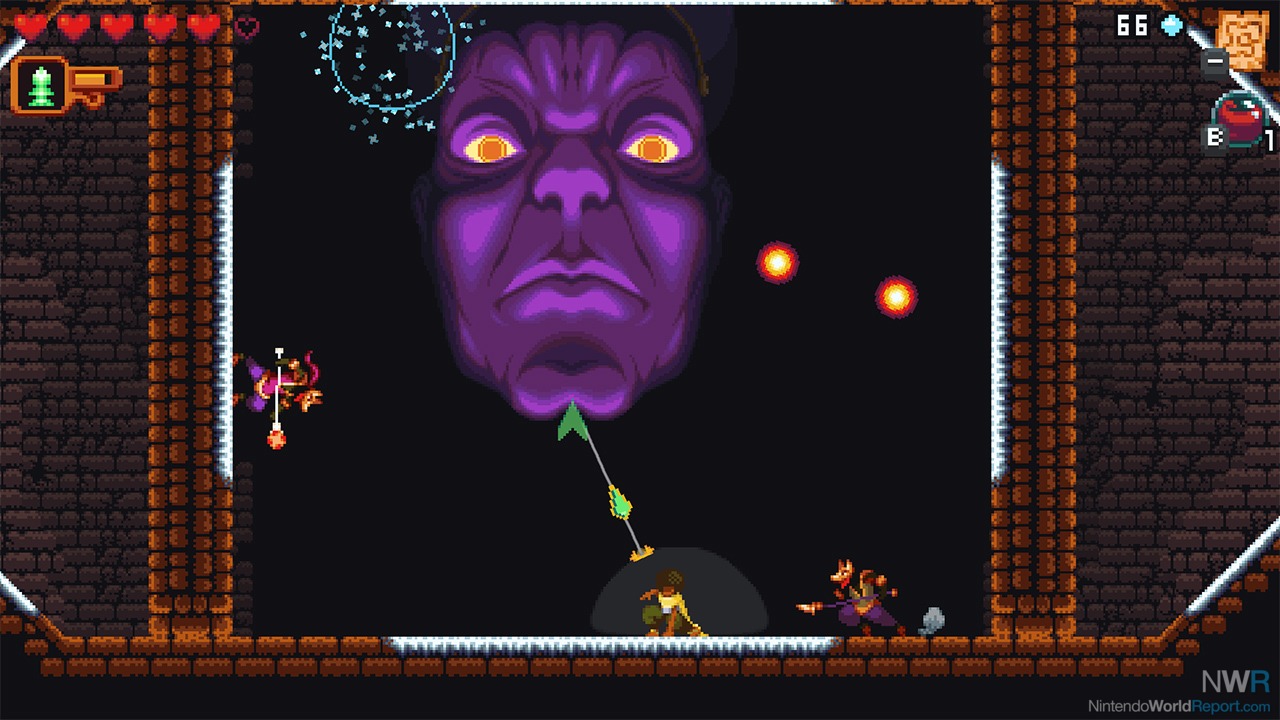 As far as challenge goes, Dandara doesn’t mess around. As a result of the blend of the unique controls and hardy design, the difficulty can get punishing. Once again, sometimes the challenge is welcome. Tense platforming segments test your dexterity and mastery of the controls. Tough combat situations require grace and strategy to take out your foes without taking heavy damage. But Dandara is filled with cruel chokepoints. Bosses that mercilessly kick your ass. Labyrinthian areas that feature dead ends and overbearing gangs of enemies. Even still, if the penalty for death was lighter, this would be fine, even potentially awesome. However, the penalty for death can be massive. While a lot of power-ups and items are found in the wild, Dandara levels up using acquired salt - the in-game currency found all over the place. Each level up can boost health and weapon energy, as well as boosting health and energy recovery. When you die, you lose your salt and start over at the last checkpoint and in a Dark-Soulsian manner, you can recover your salt from your corpse. If you die again on the way there, that salt is lost to time. I’m aware a certain type of gamer appreciates that brutality. I don’t, especially when I’ve lost a few level-ups from death in Dandara. Skill and mastery is rewarded with added power, but struggle and frustration compounds in a way that can hinder the experience when you have trouble. An update available at launch helps to mute some of this punishing issues, but this still isn’t an easy game by any stretch.

Even when it’s frustrating, it’s worth pushing through, though. The world is mesmerizing, with gravity-shifting perspective changes, stunning levels, and some beautiful set pieces. In addition to the weapons, items that trigger environmental benefits or hazards are found, which regularly add a welcome change to areas you’ve already traversed. For example, in one area, a lot of skull iconography is present. When you acquire a certain item, these skulls are activated when you’re nearby, opening up secret passages and awakening new enemies and obstacles. Since the Metroidvania design emphasizes backtracking as you uncover new abilities, having the world change alongside your powers is welcome. 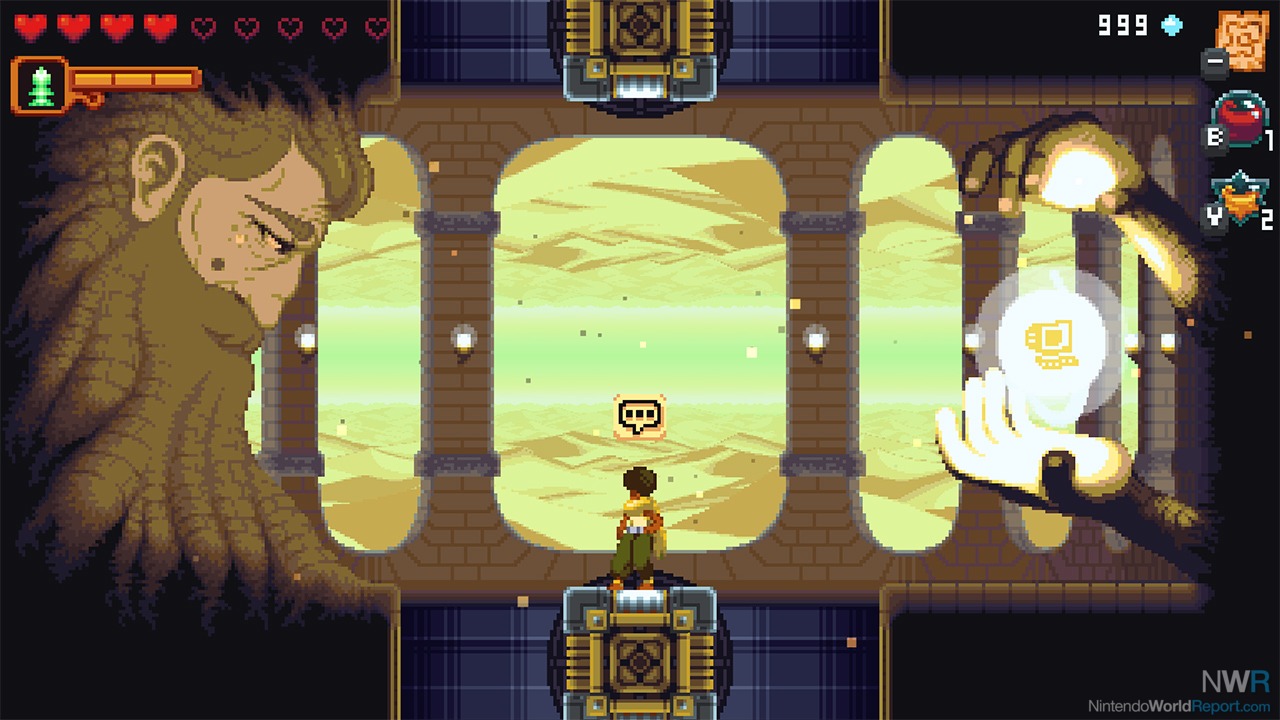 Unfortunately, the map can be disorienting and unhelpful during your traversal, making any backtracking rough. The map is always presented from one perspective, so even if you enter a room and the camera changes, that won’t be reflected when you look at the map. It makes it hard to figure out what door you entered in or where you are at a glance. Over time, I developed workarounds to account for this issue (chiefly checking the map before leaving a room and then checking it right after to see what two rooms I just traveled between). Nonetheless, it’s clumsy.

While a few consistent problems weigh it down, Dandara is still an engrossing adventure. As many times as the in-game map bugged me or the difficulty got me down, I kept at it, working my way through the peculiar world, seeking out new items and upgrades and figuring out how to move around delicately to attack or avoid foes. It might not be for the faint of heart, but Dandara is a wonderfully idiosyncratic game.

DANDARA IS THE DARK SOULS OF METROIDVANIA?