Not all who wander are lost

The sense of exploring and discovery is a big approach many game developers try to implement and build off of in their titles. Observing the world and discovering not only new places but how the world works can really help create a unique atmosphere, and this seems to be at the heart of developer PolyKnight’s newest open-world flying exploration title InnerSpace. Although not perfect, it is a beautiful adventure inside and out that I won’t soon forget. 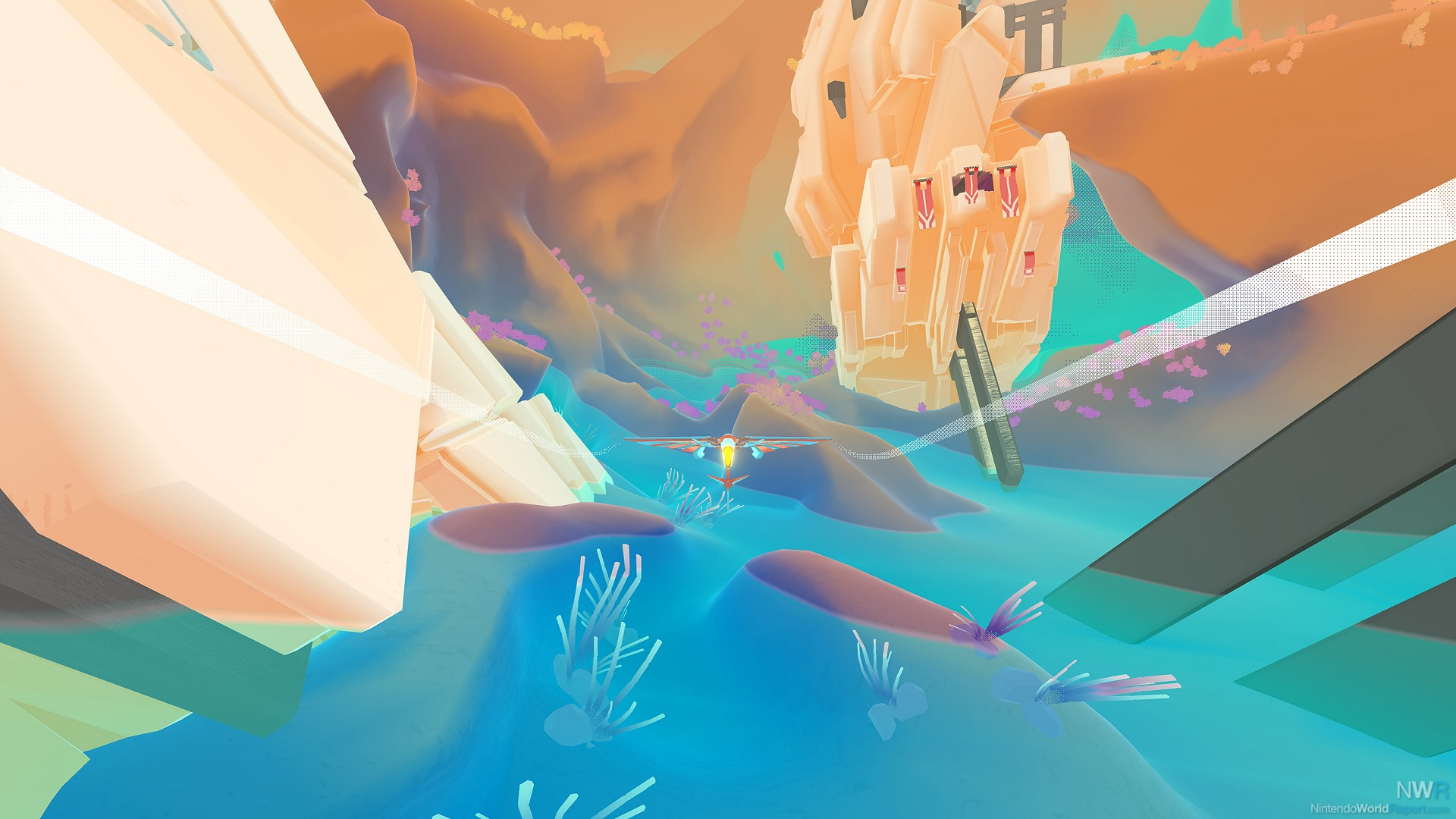 When I first started the game, barely anything was explained to me. What was I? What could I do? Where was I supposed to go? As I made my way further through the game I soon realized that the mystery of my situation was really the whole theme surrounding the game, and an integral part of the adventure and atmosphere. As I explored my way through the introductory level I was greeted by the main companion you encounter, an Archaeologist exploring the Inverse. I quickly found that I was actually constructed by the Archaeologist, and was more or less to be used as a tool meant for burrowing deep into every domain to collect relics for research. 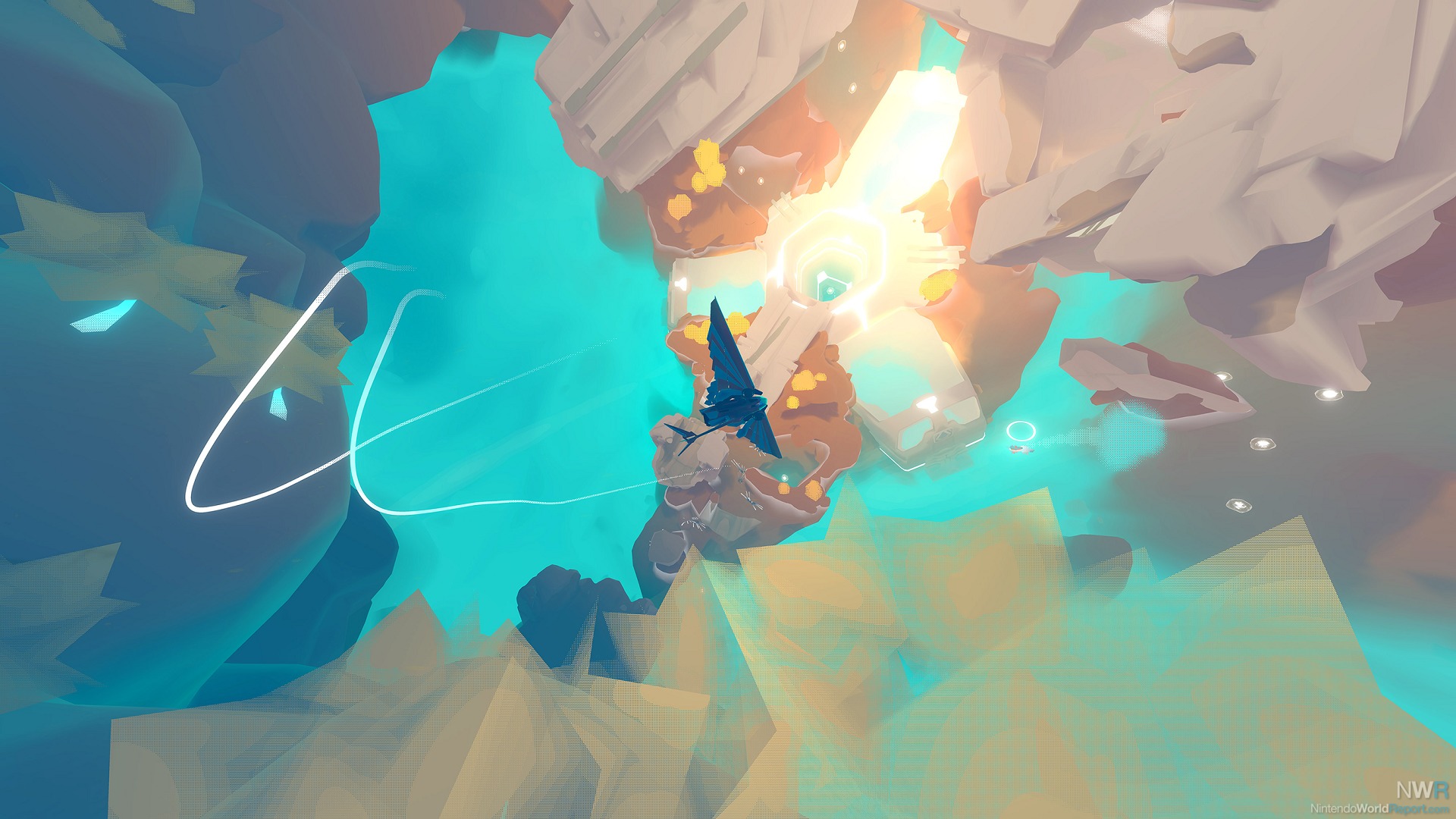 The overall gameplay is exceedingly simple throughout the game. Playing a little like Pilotwings, the player flies a plane that can soar through the air at high speeds. Interestingly enough, the player doesn’t really ever land or stop the plane, but is always flying to explore for the Archaeologist. Using the right analog stick can give you the ability to speed up or slow down, and also spin 360 degrees to help for tight turns. Throughout the adventure finding relics can also enhance and create new abilities for the plane. While gliding through the air can seem very graceful, you will run into objects and hazards a lot. Getting stuck inside of a structure can feel quite awkward and messy, and if not corrected will result in a restart to whatever level you are in. This aspect of the game is really where I felt more polish could have been added to make for a smoother experience. 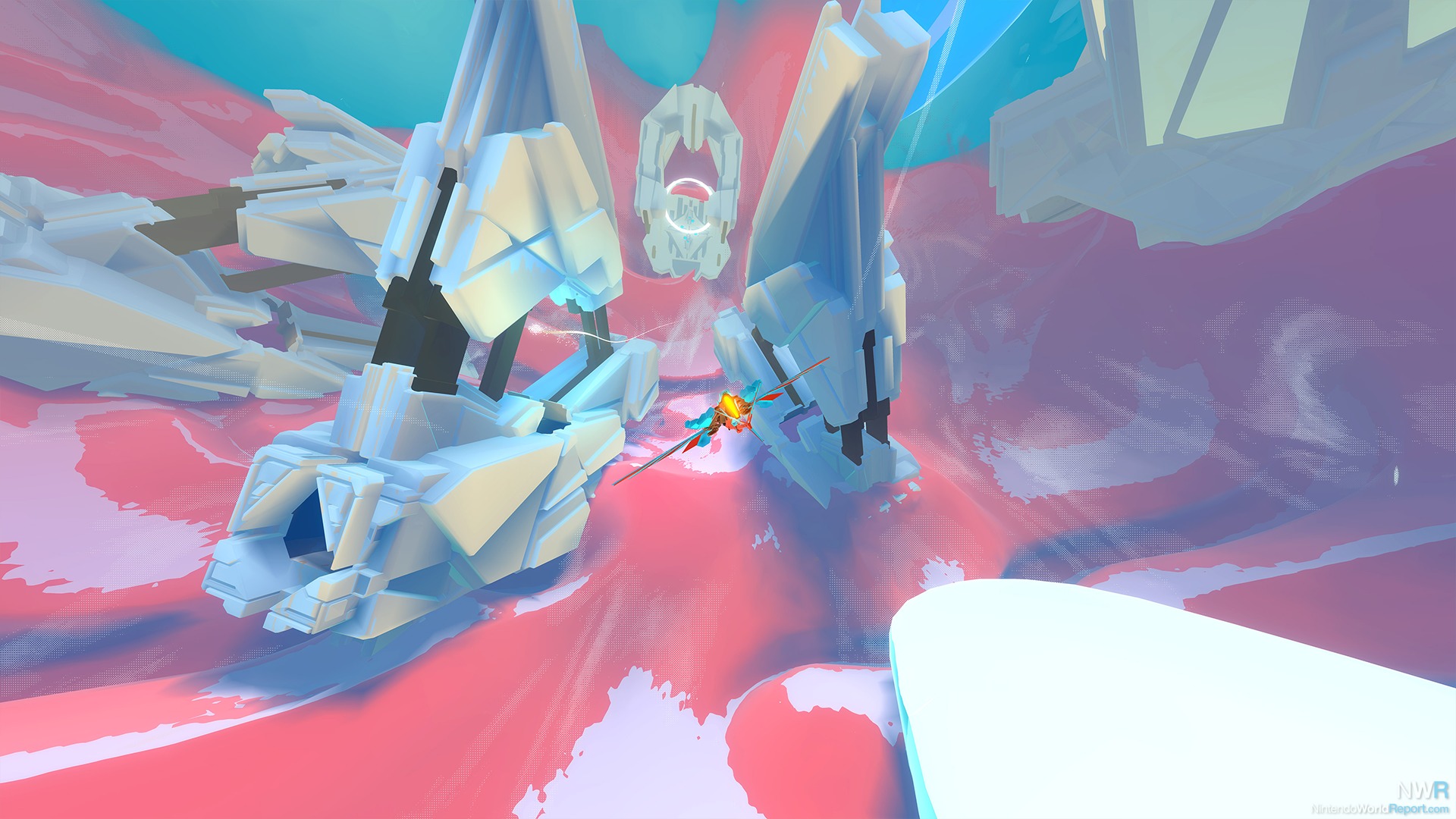 The atmosphere of InnerSpace is definitely the game’s best strength. From the get-go, the visuals combined with the sound design complement each other perfectly. Bright colors showcase every element of the environment, putting a brilliant sheen on most textures with a glowing interior sun illuminating the air. Diving into the depths of the surrounding water illustrates the thought and crafting that went into the design of every crevice and chasm. The music is truly wonderful, and really was the most important part of creating a mesmerizing, almost hypnotic atmosphere. The sound effects really characterize the tone of the world as well, and really reminded me of nostalgic memories from previous Zelda games. 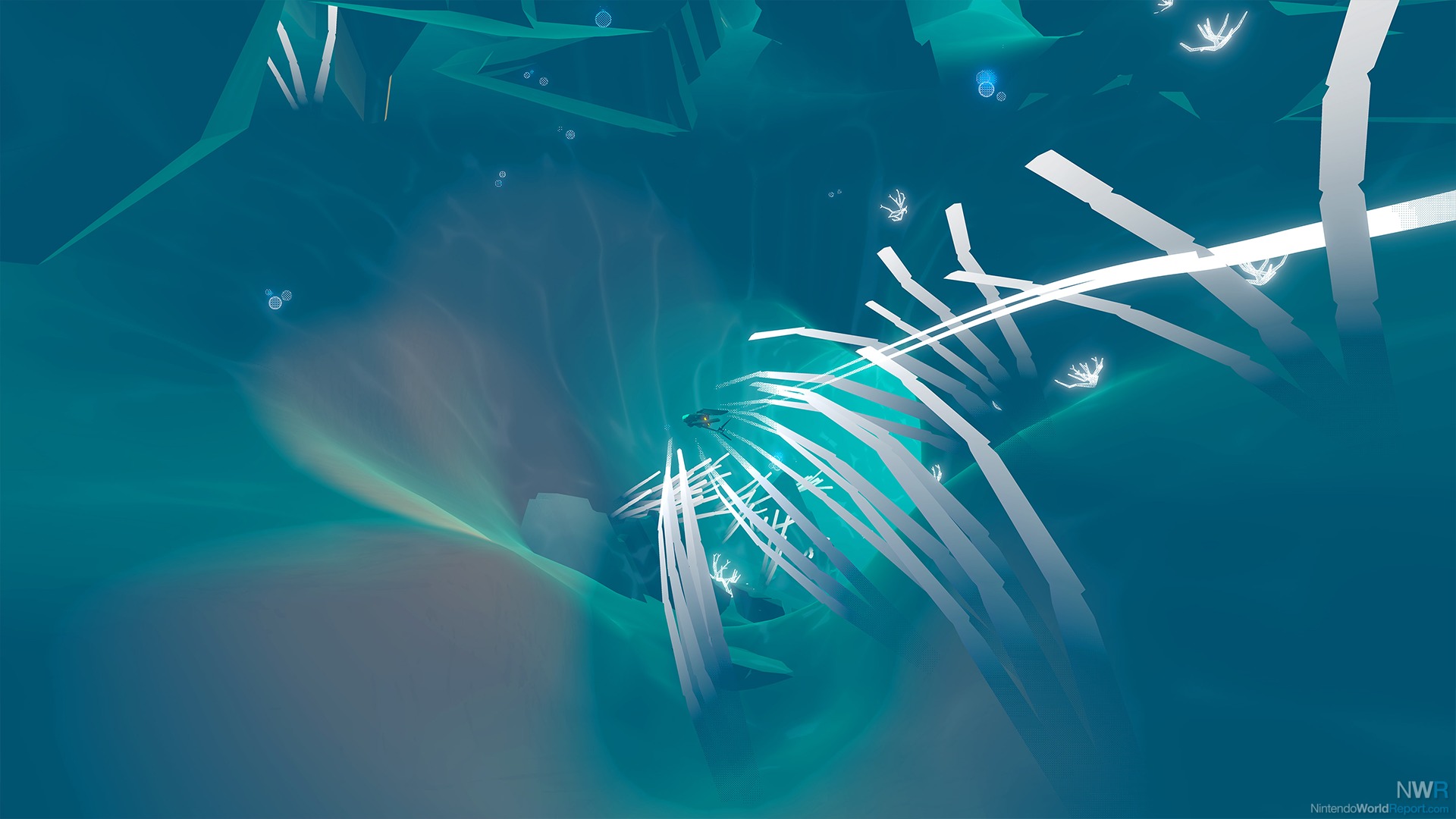 Being in the Inverse, the nature of the physics work a little differently as they are literally inverted. Different portals will take you to other areas where water encompasses the outside of the inverted spheres. Because of this, flying around can be a little confusing. With no map - or any on-screen interface - exploring and memorizing every space is really your only option to know your whereabouts. I could definitely see this aspect of the game’s design not being everyone’s cup of tea, as many times during my playthrough I spent time just trying figuring out where the heck I was. But after awhile, I did eventually get the hang of really paying attention to every aspect of the environment and trying to remember where I have and haven’t been.

As beautiful as the game is, there are some aspects that definitely hinder the game’s strong atmosphere. Relatively long loading times occur both initially and when teleporting between portals. At one point a dialogue text box was stuck on the screen until I reset the game. But the biggest issue I experienced was the near constant frame rate drops that happened during gameplay, especially at the busier moments of the game. While these hinderances are unfortunate, they really did not ruin the overall experience. 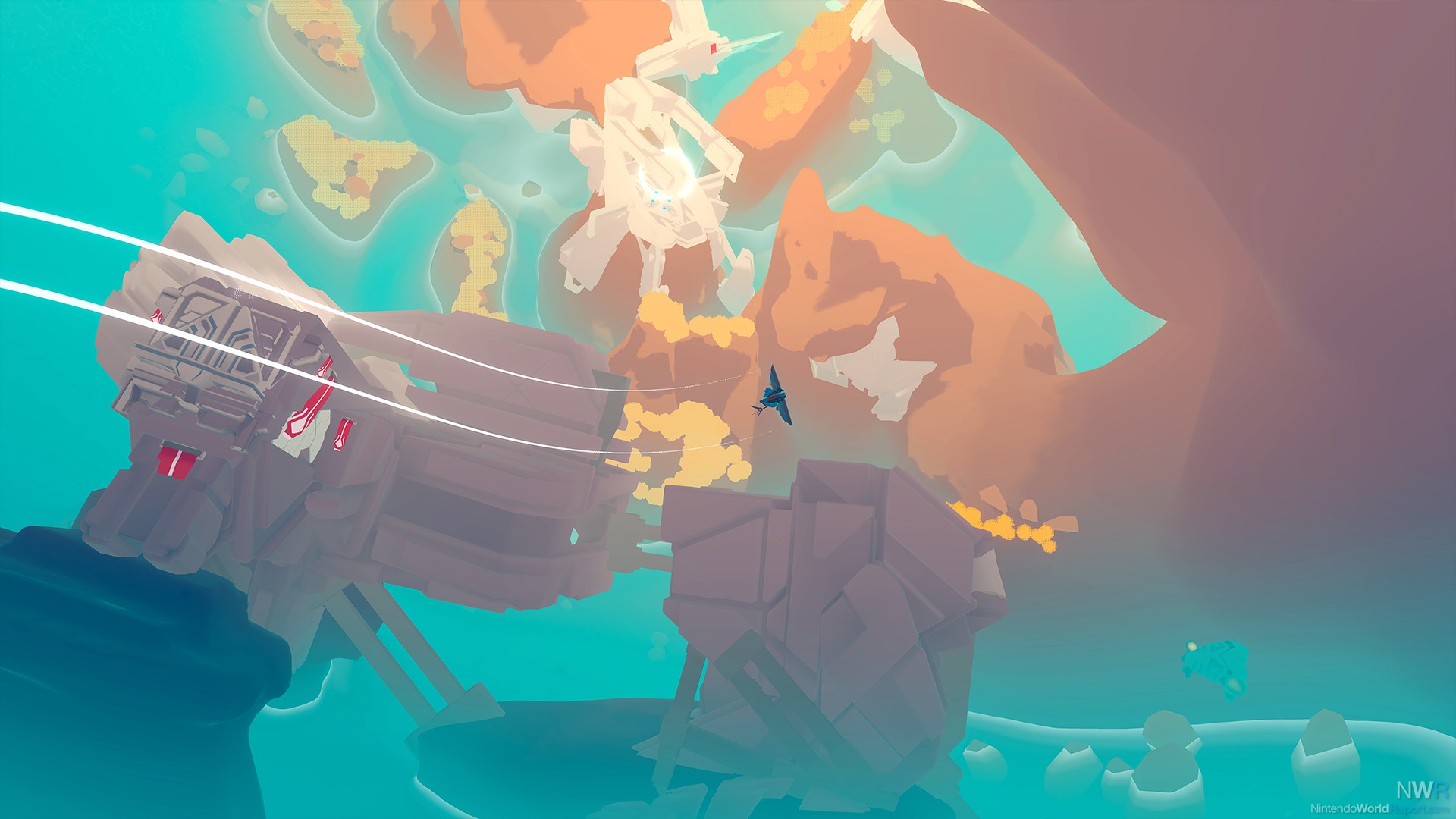 The organic nature really affected every part of my adventure playing InnerSpace. Everything from the backstory to the overarching gameplay goals had to be discovered and sought out by myself. There were many times where I was at the point of feeling completely lost, only to find that just around the corner contained the clue to unlock my next destination. While the controls could use a bit more polish, InnerSpace really came to be a beautiful experience that I grew to love. Nothing was handed to me, but I felt like I was actually charting the land and helping understand what had happened in this mystical world that was presented before me. If an ambient and memorizing adventure is what you’re in the mood for, don’t be afraid to explore the depths of InnerSpace.

Saw the title, but leaving disappointed.  :(