A stunning shoot-'em-up that's the perfect addition for the Switch.

Released last year for the Wii U, Star Ghost is making a strong debut on the Switch. This deceivingly simple side-scrolling shoot-’em-up is poised to be for a great addition to anyone’s library. A perfect balance between simple mechanics that make it easy to pick up and play and variety and challenge that will keep you coming back for more makes Star Ghost a quality shooter on the young system. 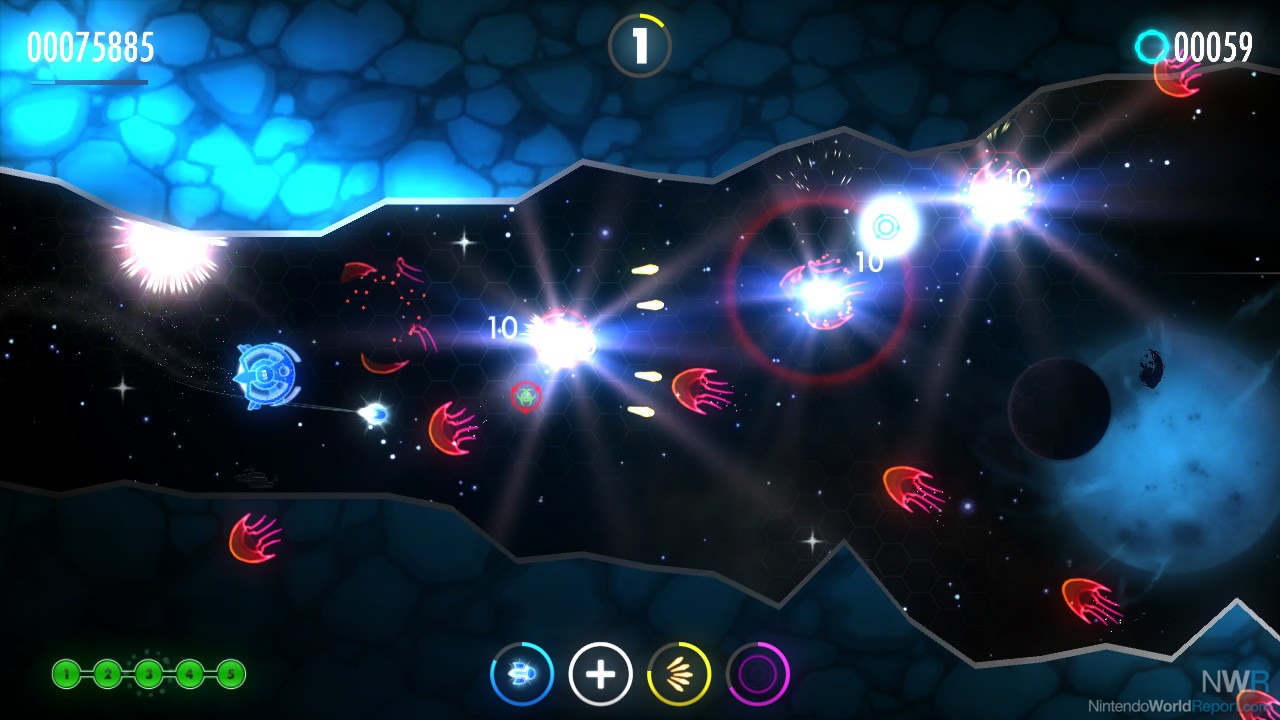 The controls are minimal: the spacecraft perpetually flies forward and shoots automatically. Players thrust their ship up by pressing A, and release it to fall back down. For most, this is all you need to get started. Angling the left joystick will somewhat aim where the ship fires, but this can be a little distracting at first as a clear learning curve is present. The addition of a traction tool, activated by holding the left joystick backward, allows you to draw in items within a certain radius. Your ship will stop firing while activated however, so don’t go crazy with it.

Like with all shoot-’em-ups, a selection of power-ups are available. Players’ rate of fire, spread, and traction radius can be increased up to four times by grabbing items dropped by enemies or purchased with credits at the end of levels. Health is also dropped and sometimes, if you’re lucky, you’ll come across bigger bonuses like a repulsion field or turbo score multiplier. Maxing out on your rate of fire and spread as enemies are destroyed in waves, leaving piles of boosts and credits is very satisfying. However, every power-up has a timer that downgrades the boost if another is not picked up in time and viruses will temporarily freeze your weapons if you accidentally touch them. 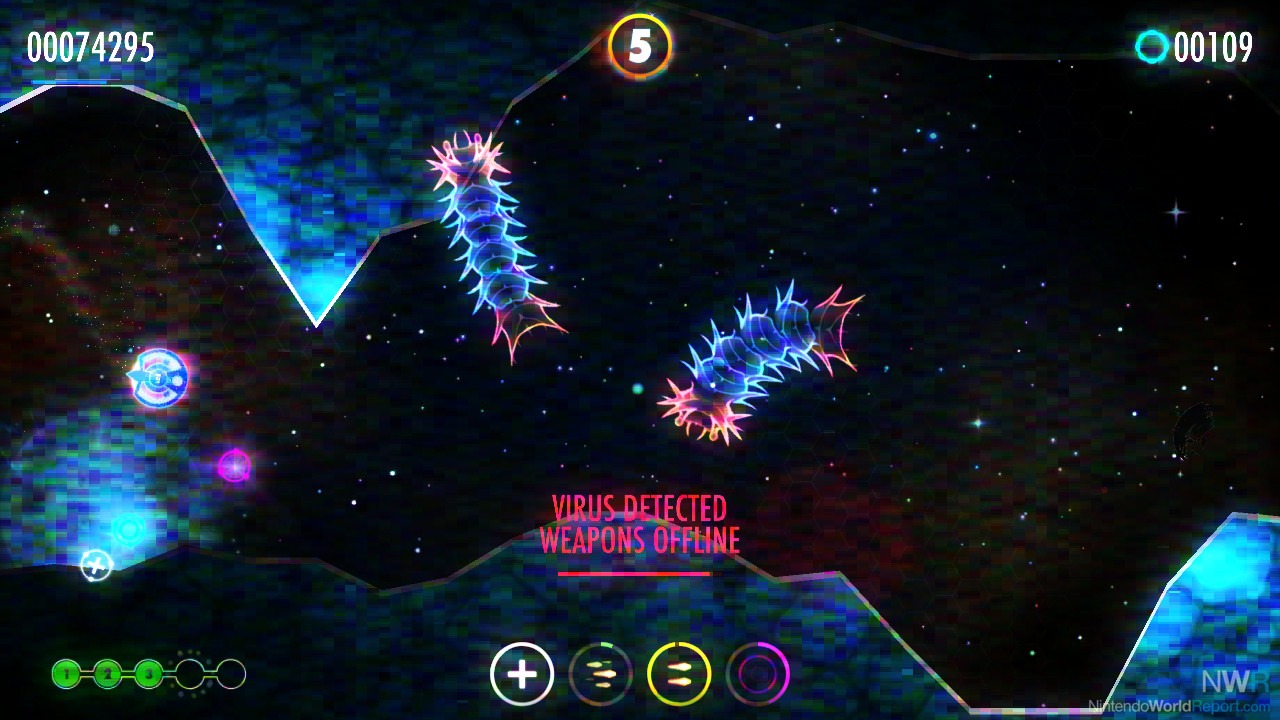 The game is broken in to 12 regions, each with a couple stages to complete within and scattered boss battles. The difficulty builds up quickly; this is definitely a game that will take a long time to complete. Each stage is mostly randomized. The geography and enemies will vary so you can’t memorize levels. A good variety of enemies with different movement patterns and abilities make it so it is hard to even get past the second region if you’re dealt an unlucky hand and are low on power ups.

The stark neon-on-black aesthetic makes enemies and obstacles pop, an important feature as the environment changes quickly throughout stages and your spacecraft has no brake. Some levels may feature wide open expanses so all you have to worry about are enemies, while others may have so many rocky outcroppings that you have to expertly squeeze your craft between tiny spaces. When you do hit something, the spacecraft will bounce backward, which gets grating fast. This can cause a repetitive effect where, for example, if you’re in a tight spot, your craft may bounce into an outcropping above, which in turn will bounce it back down to the lower outcropping, depleting your shield level exponentially. However, there is no ramifications for touching the top or bottom of the screen if you’re in an open space. Instead, it will drag the ship like a car with no tires, vibrating the Switch, but causing no damage. 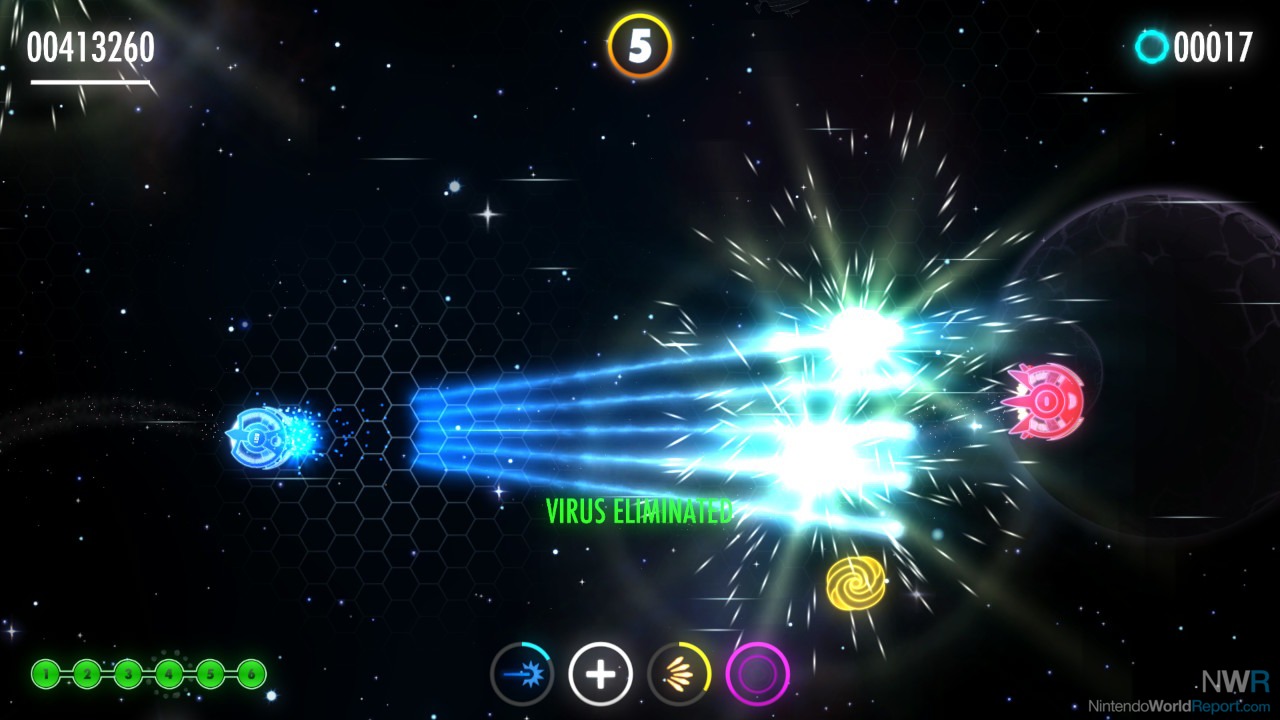 Overall a genuinely fun nature pervades through this game. The bright colors and fast-paced play combined with an upbeat soundtrack by David Wise keep it moving. The concept might be one-note, but enough variety is present in the levels for consistently fresh gameplay with an old school arcade feel perfect for handheld play on the Switch.

In true arcade fashion, the game is unforgiving: deplete your shields and your craft will blow up as a giant Game Over page appears. If you’ve saved up enough credits (quarters, anyone?) you can buy a new life, otherwise it’s all the way back to the first region. The only thing this game is seriously lacking is an online leaderboard so you can compare scores with your friends. Currently there is only the option to rank yourself against other users on the same Switch. Otherwise this is a gem of a game, perfect to play for a few minutes, but easy to play for longer as you try to get through as many levels as you possibly can.