What we need are some heroes.

SteamWorld Heist: Ultimate Edition for Switch follows the turn-based cover-shooting adventures of Piper Faraday and her crew of space-faring cowbots. A mysterious someone has been Frankenstein-ing together pieces of fallen steambots to create an army. Faraday and her outlaws look into the matter for a friend at the local outpost. 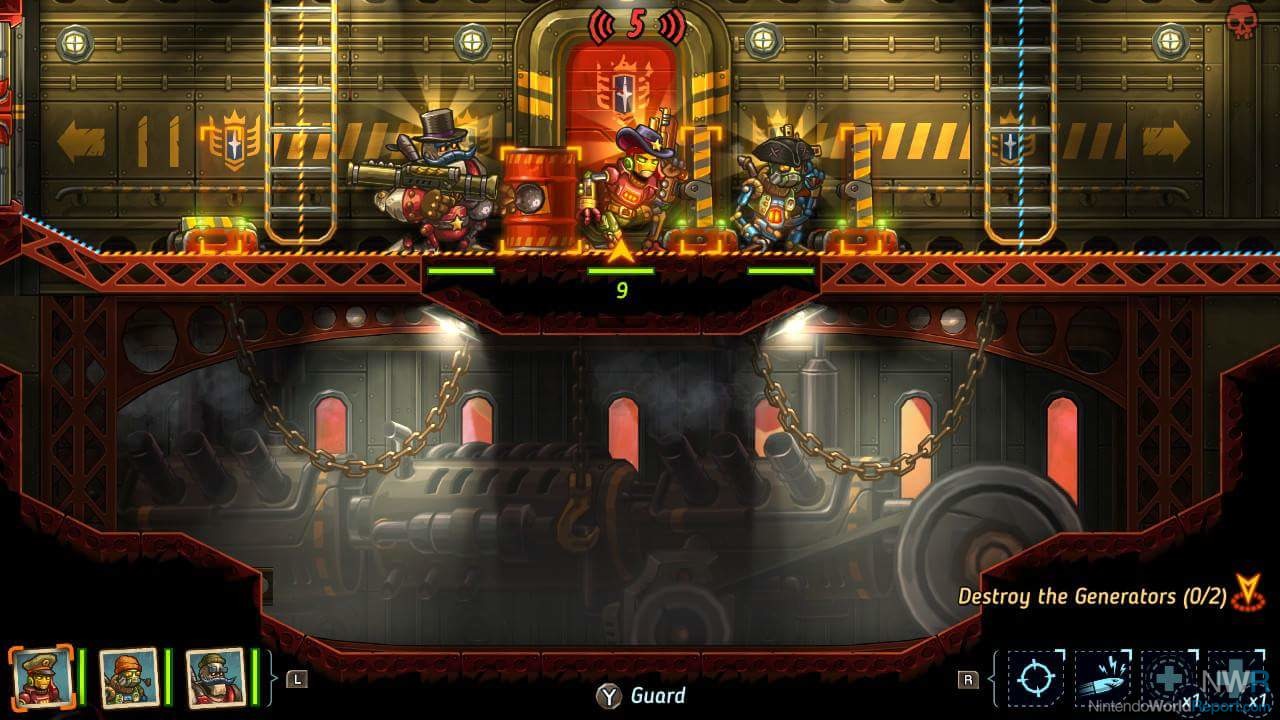 Each level is a randomly generated spaceship Piper’s crew must plunder and escape. Most missions have another objective, like reaching a specific point or taking out an important enemy. Clearing every objective and nabbing the “epic swag” will net full stars for that level. Stars represent Piper’s reputation, allowing her to intimidate blockades on the map, buy rare items and recruit new crewmates. It’s a pretty brilliant progression system that drove me to replay levels if I lost a character or missed a chest.

Characters move throughout each ship by taking a limited number of steps, highlighted in orange, before shooting or by “sprinting” to a further tile outlined in blue and giving up their shot for that turn. Players aim manually, and most weapons don’t have a laser sight, so long shots miss often. It doesn’t help that the robots breath and move slightly while aiming. I did feel badass when I landed impossible shots or ricocheted behind cover. I often felt my characters were just a step shy of the cover or shot I’d like to take, adding ripples to my strategy. Nothing felt unfair. 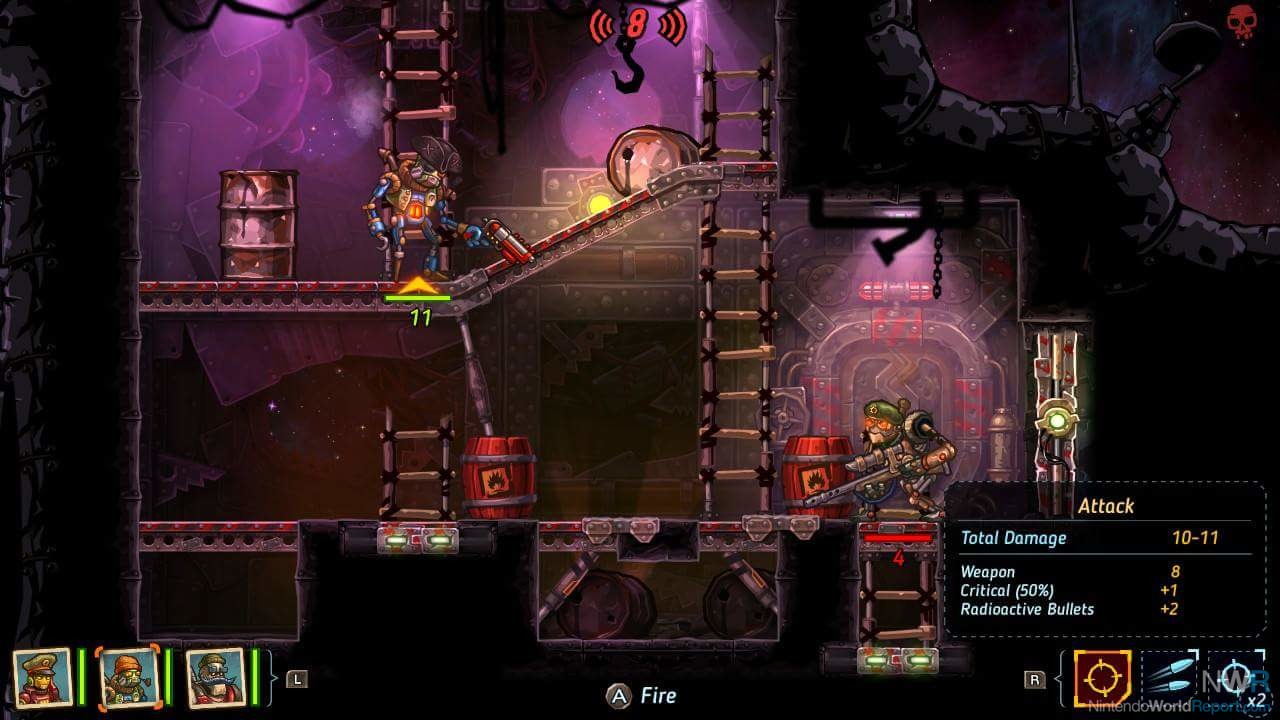 Crew members have unique movement and health stats, but they don’t vary wildly. The true differences are between equipable weapons and skills learned by leveling up: one character gains the ability to shoot twice and another can move again after finishing an enemy, for example. I never really grasped who could equip what, and the limited inventory space forces you to sell old items after almost every mission. In shops, I found myself switching between the item description, my inventory and my character screens before giving up on learning. I was fine brute-forcing my way through standard difficulty relying on post-level rewards, but a more determined player might find the depth here. 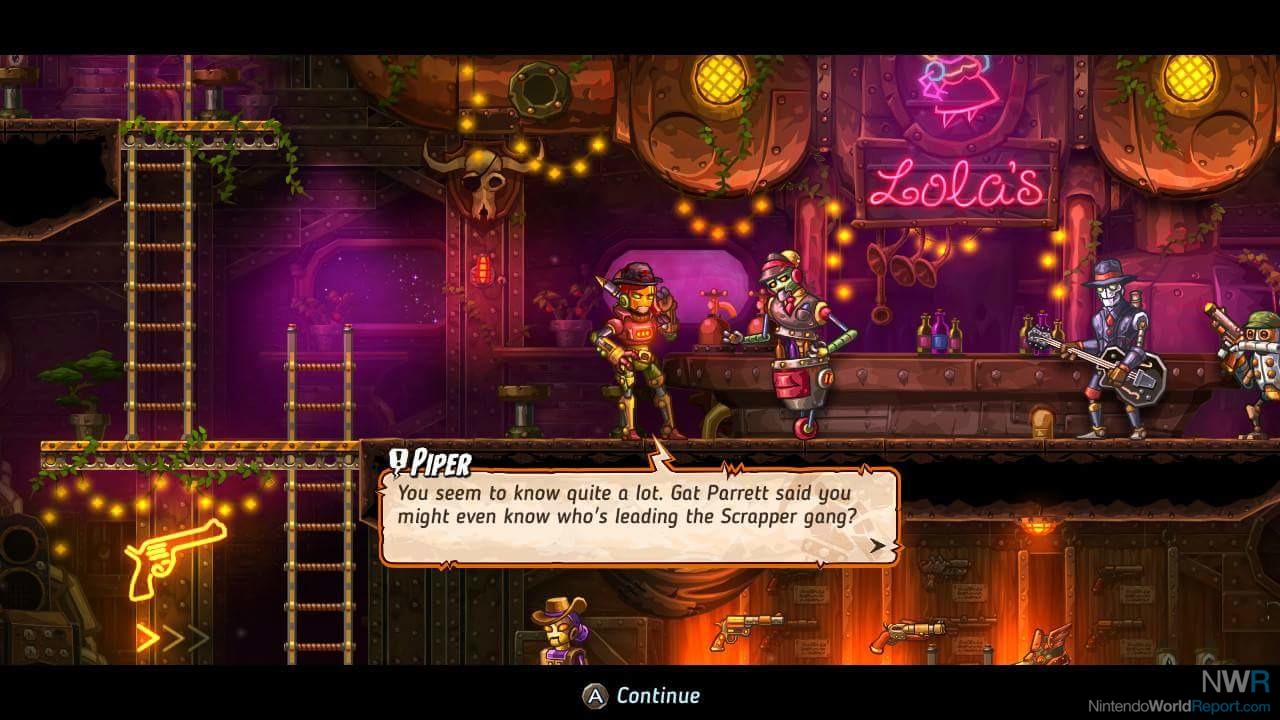 Perhaps SteamWorld Heist’s most impressive feat is how perfectly crafted that steam world is. From the steam-powered space piracy to the calculated, turn-based combat, everything fits the “cowbot” theme almost mechanically. Each crew member’s backstory and dialogue hints at a deep and varied universe all relating back to a robotic Wild West. Even the soundtrack sounds like it was played on the pipes in a music factory, with the exception of each bar’s unique song (with vocals). The bar songs nail the whistlesness I assume only a cowboy band from the future can pull off.

With five difficulty levels and randomly generated ships, I can honestly recommend SteamWorld Heist to anyone. The world is rich, the combat is engaging and the portability of the Switch pairs perfectly with the short missions (even if the game is beautiful on a big TV). Plug in your headphones and play this game.

Very excited to try this, but I really want a physical version. I'll hold out for a few months just in case it does come.