How many SHMUPs can you fit on a widescreen TV?

Back in the early days of gaming most TVs operated at a 4:3 aspect ratio. This meant that there wasn’t a huge difference in screen space whether scrolling vertically or horizontally. Today as 16:9 TVs are almost universally accepted, vertically scrolling games have encountered a problem: what to do with all that extra horizontal space? Dimension Drive seeks to answer that problem with a unique new gameplay hook. 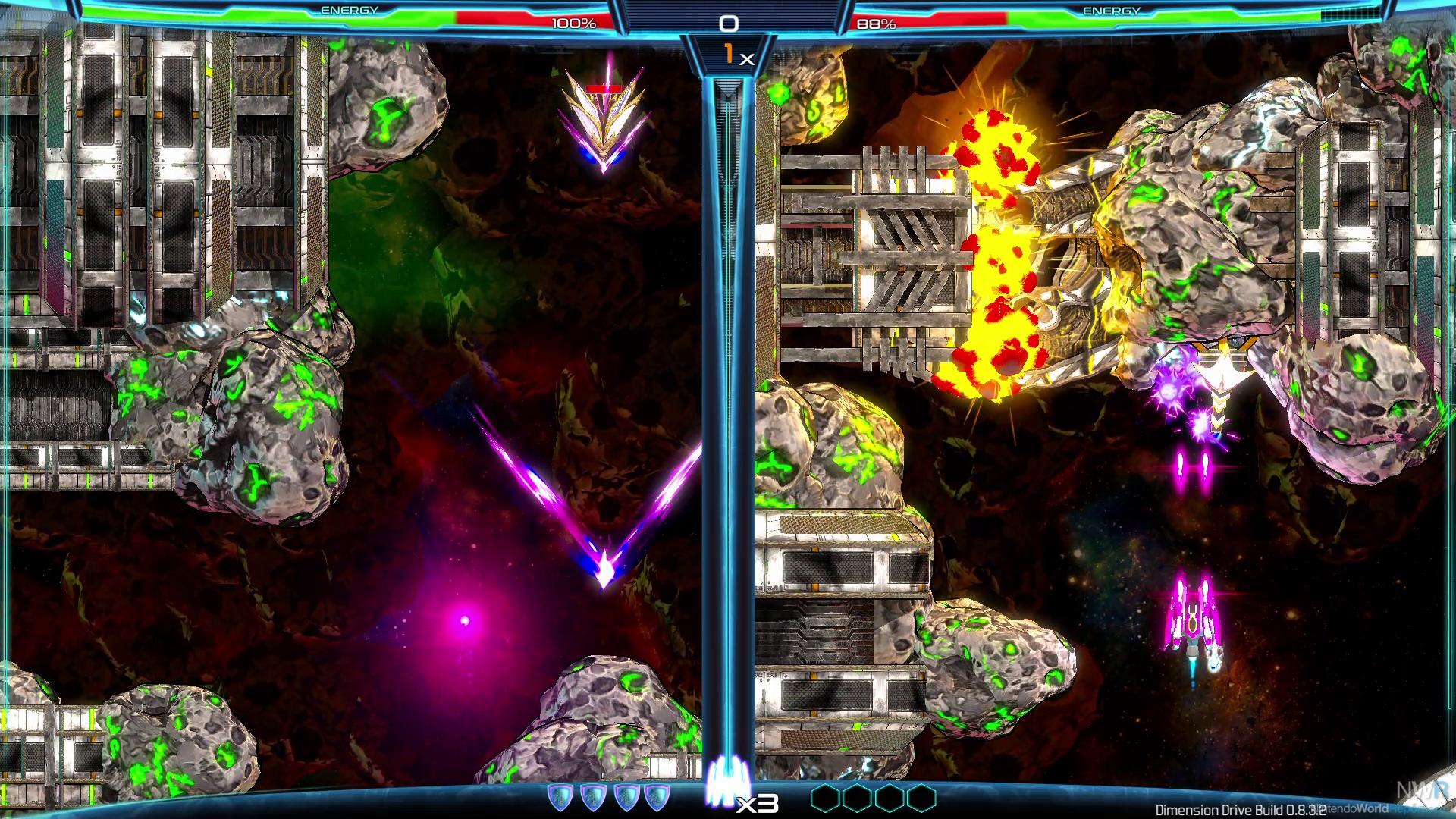 Dimension Drive is a vertical shooter. During gameplay the screen is divided vertically into two halves, giving an appearance one would associate with split screen multiplayer. Each half of the screen features unique environmental and enemy hazards. Your ship, the Manticore, can shift at will between these two dimensions. While this is a very simple concept on paper, Dimension Drive manages to milk a large variety of gameplay concepts out of this one simple mechanic. You may choose to employ this ability to escape a heavy barrage of enemy fire. You may phase from one dimension to the other in order to access an sealed off area. Skilled players may even boldly employ it to face off against as many enemies as possible for a high score. However, reaching the skill level necessary to pull off most of these moves is no simple task.

If you found the generally optional multi-screen setup of Star Fox Zero insurmountable, Dimension Drive will likely cause your brain to explode. As you get use to flipping between dimensions you’ll regularly warp directly into a wall which will instantly destroy your ship. Your ship is represented, in the dimension you are not currently occupying, as a small red glow. I often found myself losing track of this subtle indicator amongst the similar looking enemy fire, only to accidentally warp myself into an inescapable situation. Keeping track of your position on both screens in the midst of unending hazards is at times asking a bit too much. A simple indicator on your ship showing when an object is overlapping your position in the parallel dimension would have been immensely helpful. The challenge is by no means beyond conquering, but its setup makes a brilliant mechanic someone harder to fully appreciate. 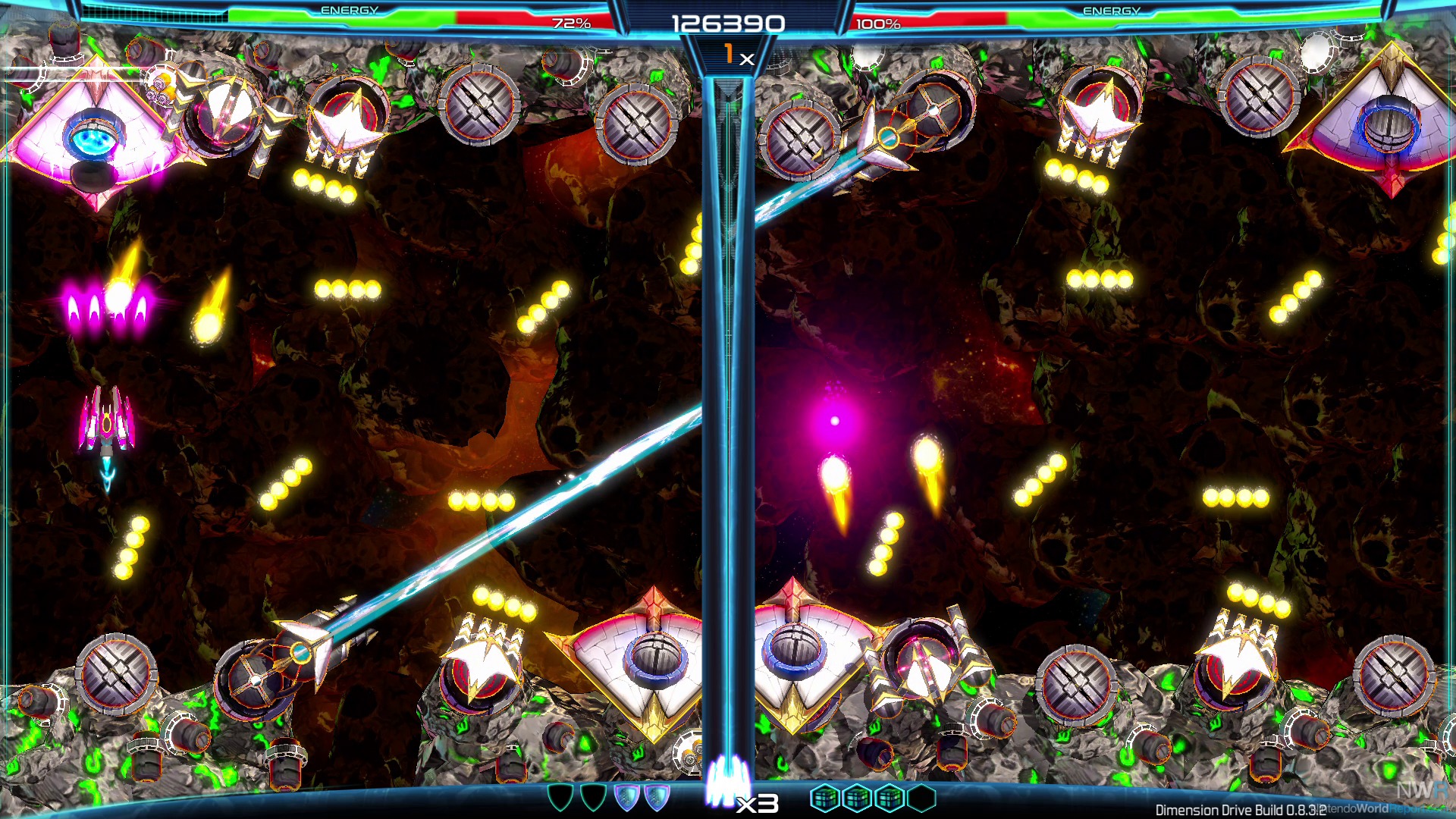 Dimension Drive generally looks quite nice, with rich environments and lots of enemy variety. At times I did wish there was a more aggressive parallax effect, as I sometimes ran into a wall simply because I thought it was part of the background. These moments were rare however, and the foreground elements generally stood out enough to be recognized as such. Sound is also handled well, with a great arcady soundtrack that fits perfectly with the action on screen.

Things control about as you’d expect, which is a good thing. Movement feels tight and responsive. Hitboxes are highly accurate, so you won’t feel cheated out of any health while weaving your way through bullet hell. As you progress you’ll earn additional abilities along with points which can be used to purchase new weapons. One ability allows you to flip your ship around backwards and slow your speed. This leads to some very unique enemy encounters in which you’ll have to quickly turn around to dispatch pursuing ships.

Dimension Drive takes a commonly held problem in vertical shooters on home consoles, and turns it into a fun gameplay mechanic. It takes a fair amount of getting use to, and at times it becomes evident that there is definitely some room for improvement. In general however Dimension Drive offers some fun twists that fans of the genre will absolutely want to try out.