Updated with final score. Local and online multiplayer are both fun, but weirdly incompatible thanks to a disappointing single save system.

Update 12/6/2017: The text below reflects how I felt before I dabbled more into online multiplayer once it was populated after Nine Parchments’ December 5 launch. The good news is that the online multiplayer works very well when you’re playing. While loading into games was sometimes clumsy (I spawned into a game in the middle of combat only to immediately die one time), once you get a party together and start fighting the hordes, the whole thing runs smoothly. While online seems substandard compared to local because of the apparent lack of communication, the fact that lag wasn’t an issue is fantastic. 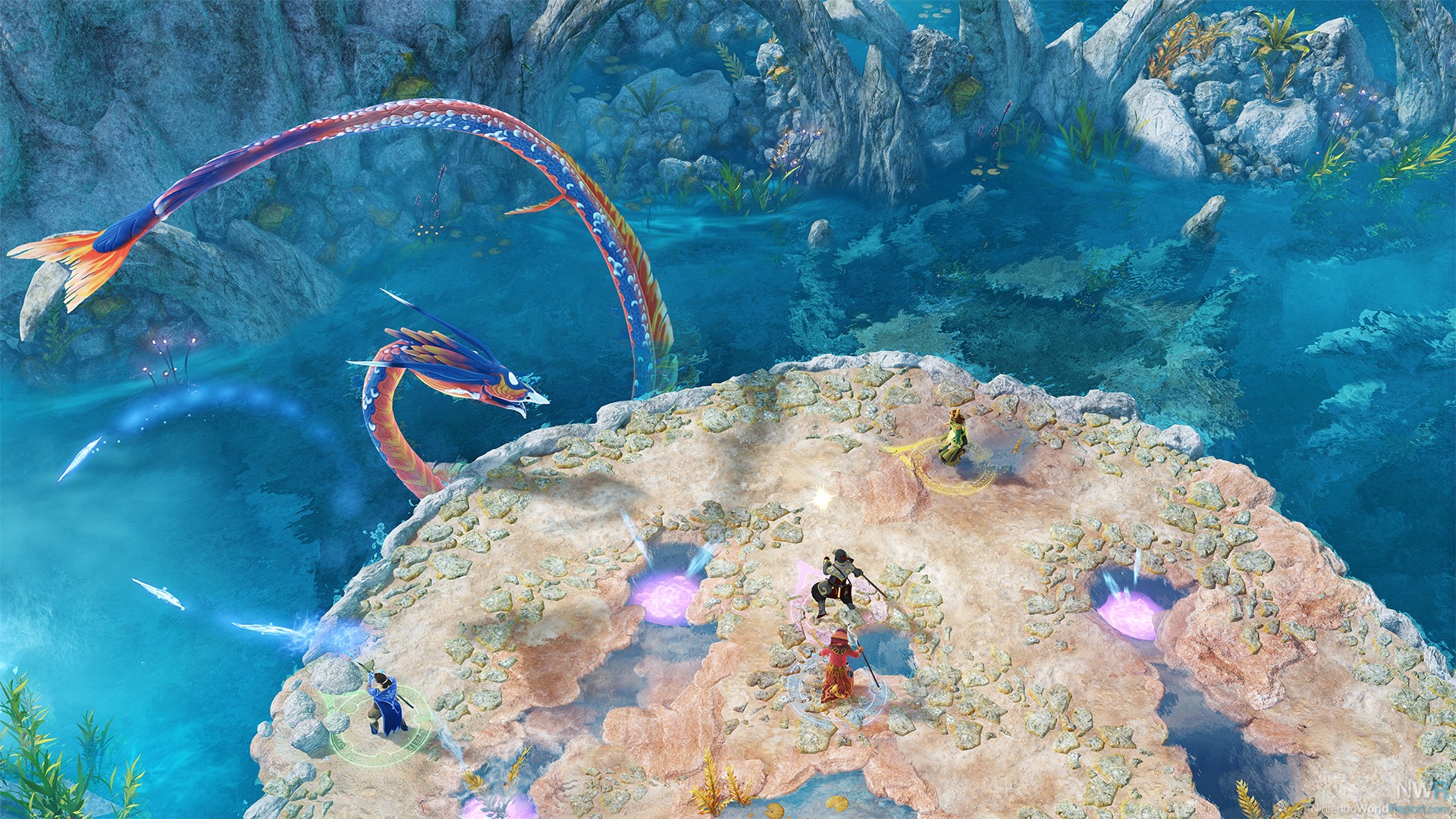 What I learned the hard way in the online multiplayer is that you can only ever have one save file going on at a time. For context, I was deep in the middle of a local single-player run when I decided to hop online and join a game. The minute I joined an online game, that save file vanished. Now, your character’s stats and level do retain, but the campaign is still upwards of five hours, and things like unlockable characters are only available in the back half. Time was invested into my single-player run, with a specific set of spells acquired throughout my campaign and eye towards getting the last of the unlockable characters. Yes - the game does warn you when you select some of the local and online options that you will overwrite your progress, but it oddly doesn’t when you select the “Join Game” option. Instead, it just lets you join a game and then only lets you resume that specific game (either with the people you were playing with or, if they’re past that level, just starting a new instance by yourself). That leads to more issues, since now that playthrough is “online only,” so if you were to play it offline - a common occurrence thanks to the design of the Switch - you can’t. On the whole, this one save file system is baffling and dramatically hurts the fun and longevity of Nine Parchments. I can hear some arguments as to why it is, chiefly that since your character progress carries over, juggling levels and skills between different save files would be tough, but having some limitation or workaround for that would be much better than being restricted to one playthrough at a time that may or may not be available offline.

As it stands, while I enjoyed playing through the dungeon-crawling mayhem of this magic-focused beat-’em-up, it’s very hard to recommend it with the current single save file restriction. I had hopes and plans for Nine Parchments, like playing through with some friends in co-op, but if I were to start that co-op game, I wouldn’t be able to play the game in any other way in between play sessions with friends. As stated in my earlier review-in-progress below, multiplayer is where it’s at in Nine Parchments, and the fact that the saving system hinders substantial multiplayer escapades is crippling.

Note: Developer FrozenByte has addressed the save issue and is planning an update in January. When that happens, I’ll update the review. Below is the original text from our initial Review-In-Progress first posted on December 5.

A Diablo-esque multiplayer-focused experience seems like a natural fit for the Switch and the game Nine Parchments, from Trine and Has-Been Heroes developer FrozenByte, is likely the closest dungeon crawler in that style to hit the platform. It is, for better or worse, focused more on ranged magic than brute force melee, limiting the scope to an extent. Thankfully a variety of spell types and elements make combat a little more dynamic. It almost works like a twin-stick shooter, as the right analog stick can be used to aim your spells while you frantically dodge enemy fire and obstacles. Ultimately, a narrow loot pool and focus make this action RPG err a little more on the repetitive side than hoped. Nine Parchments is still a good time, but that repetition hurts the single-player experience, meaning that if you want to cast magic at the hordes, you better have friends on hand.

Of note with the multiplayer is that I haven't been able to take it online much at all. As such, consider the rest of this review “in progress” since so much of the experience relies on the success of the online multiplayer. We will update with a final score by the end of the week. 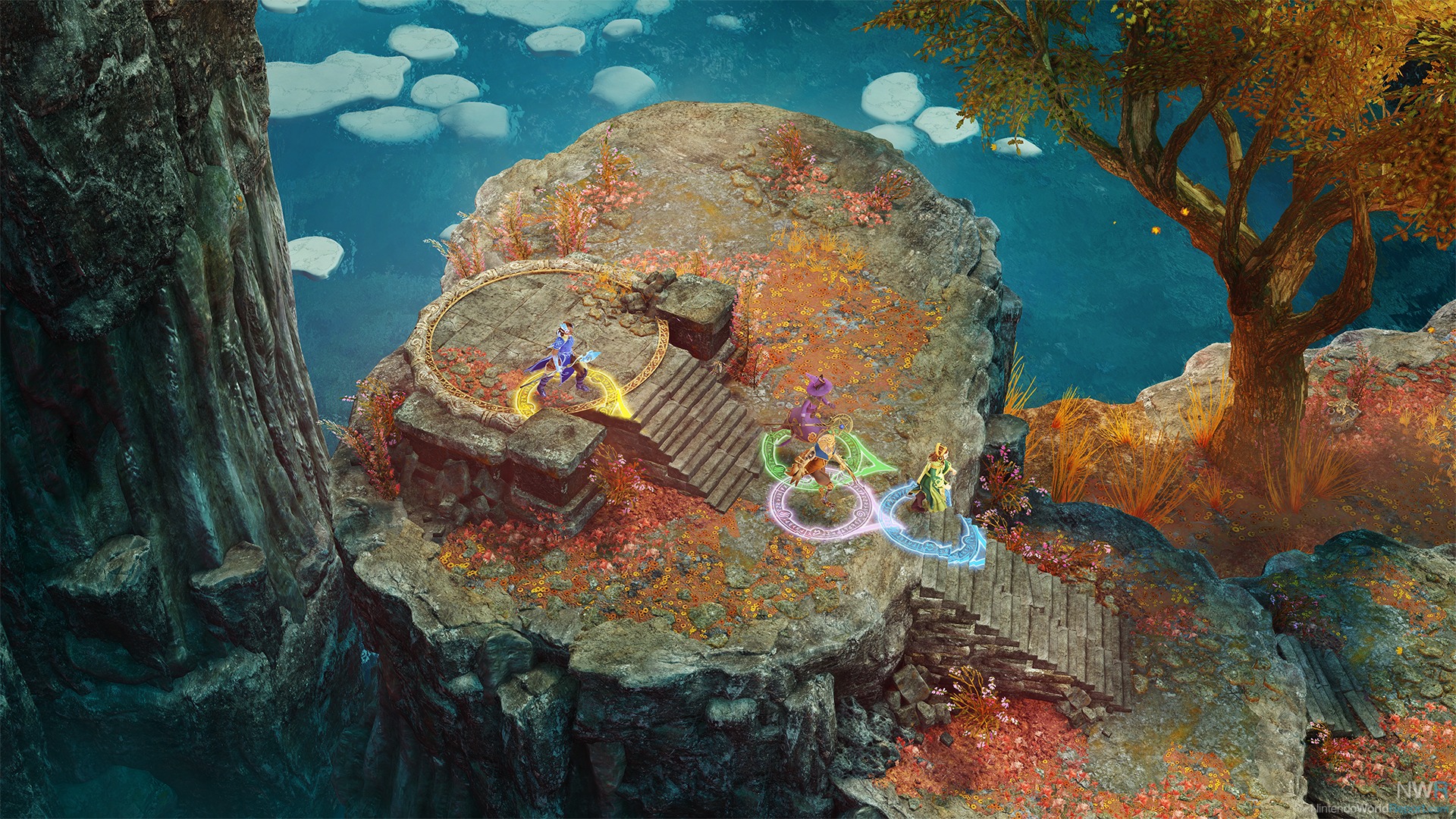 The hook for Nine Parchments, whether you're by yourself or with a full four-player party, is that you're a fledgling magician trying to go through magic school until the titular parchments are cast to the wind. You, as one of eight characters (though only two are available to start), set out to find the parchments and save the day. The story has a lot of dopey charm, mostly presented in the scattered narration and character voices. The tone is very similar to Trine, which makes sense as the two are in the same universe (the wizard from Trine makes an appearance).

The meat is in the combat, which requires deft movement and balancing of magic attacks. To begin, you have three spells but eventually gain a total of nine from an assortment of distinct spells. They vary in damage, range, and execution, but all come from one of six elements. It takes a little while to grasp what each spell does, as some are normal projectiles or beams while others are area-of-effect incantations, but after a few stages, I was able to effortlessly bounce between my spells to attack enemy weaknesses and openings. Spells are all elemental (i.e. fire, ice, electric), and most enemies are of a specific one. If you attack a fire enemy with a fire attack, it does no damage. This can get frustrating when you square up against certain enemies that become almost impossible if you don't have the right type of attack and elemental weakness. By the time this happens, you have more spells, but even with a balanced spread, I'd occasionally get railroaded into these moments. 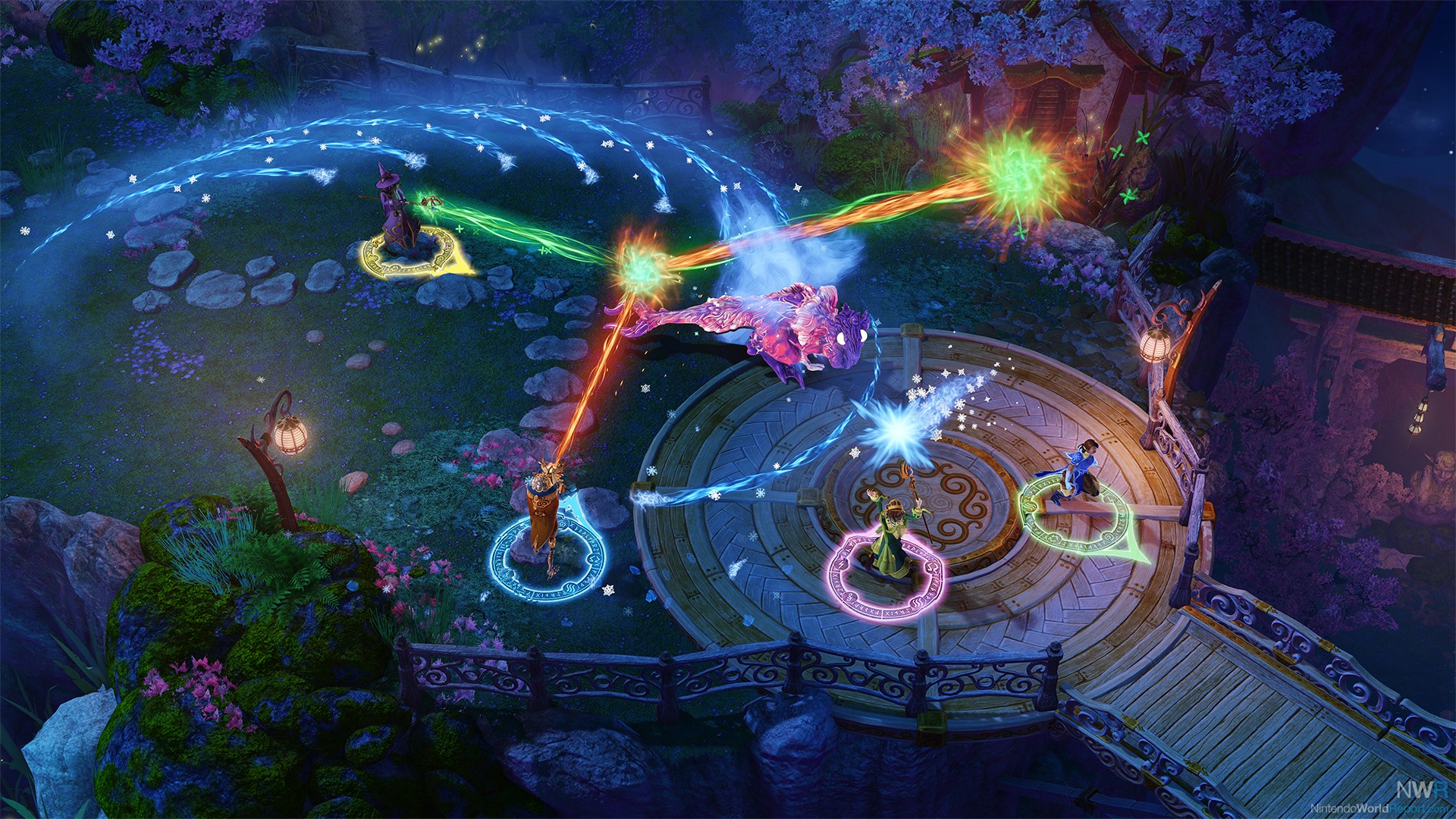 But that was all in single-player. Multiplayer is very much the ideal situation for Nine Parchments. Having more character and play variety washes away those single-player complaints and is the optimal way to experience the game. Folks can drop in and drop out whenever, making it easy to bring new players in even when you're in the middle of a level. It is annoying that you can only have one active save at a time. Yes, your character's level and experience saves, but your progress is wiped away. It's frustrating especially when you're going between single-player and multiplayer. You have no option to start over with a new group while keeping your old save, even when going online it seems (we will confirm soon).

In each of the 30+ levels, various collectables are hidden but unfortunately most of them are kind of boring. Each non-boss level has five hidden feathers, which are used to unlock different items. Also, hats and staves are found in levels, but hats are purely cosmetic and the staves are few and far between. Most treasure chests I found in the levels just had experience points and nothing else. A core element of the Diablo-like experience is good loot, and the loot here is subpar. The best part of the hidden items are that they lead to the hidden characters. Getting the staffs of the locked characters will unlock a side section in a later level to unlock the hero. The first of these segments appears halfway through the story and it seems like the idea is you won't really touch these optional characters until after you finish the game. In multiplayer, those characters can come out whenever you find them, once again confirming that the the best way to play is with friends.

Nine Parchments has its problems, but for the most part, it is still an entertaining dungeon crawler. If you plan on playing solo, your playtime might be a little more frustrating, but if you have some local friends, a multiplayer romp through this game is sure to be a good time. Online, as of this writing, is a wild card. If it works well, Nine Parchments has the potential to be one of the better online experiences on the Switch. If it's rough? Well, a lot of the appeal for Nine Parchments will wash away. We will update with a final review after more playtime before we reach a verdict.

I tried the demo and could *not* get it to work with 2x single joycons, for 2 players.


The demo forces you to press 'A' immediately putting the game into dual Joycon mode, then, when you add 2x more single joycon players, there is no (obvious) way to remove the original, dual joycon character.


Did you (or are you able to) quickly test how easy it is to set up a 2 player, one joycon per player game?

Easiest way to pair controllers, also single joy-cons, is to press plus sign (+) in the lobby. In the full game you can do this also in the main menu. This should to the trick :)