Train up your Chords of Steel, court is back in session!

Finally, the saga is complete. With the long-awaited re-release of Apollo Justice, Ace Attorney fans can play all six games in the entire main line series on their 3DS. 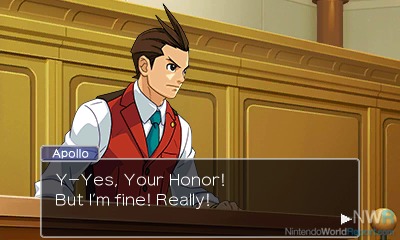 Let us begin with some recap. The Ace Attorney series can be described as a collection of visual novels with a puzzle element thrown in. The games see you take on the courtroom as the defense lawyer in a series of increasingly bizarre murder cases, peppered with a cast of even stranger defendants and witnesses. You must investigate crime scenes to discover clues, find contradictions and lies in the witness testimonies, and present evidence with the series’ trademark "Objection!" to catch liars in the act and unravel the truth of what really happened. Apollo Justice is chronologically the fourth game in the series, and each game adds to the continuing storyline that both deepens with each new entry, and depends on a knowledge of past characters and events to truly appreciate all the continuity nods and in-jokes. To truly ‘get’ the series, Ace Attorney should not be played out of order and that’s precisely what makes this 3DS release so important.

After the success of the original trilogy starring Phoenix Wright on the Game Boy Advance in Japan, the trilogy was translated into English and ported to DS. Then ten years ago, the first DS-exclusive sequel came along in the form of Apollo Justice. It featured an almost entirely new cast of characters in a familiar world, stepping out into what would later become the ‘next generation’ sequel trilogy. 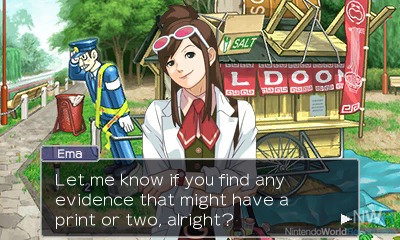 While it featured an all new protagonist, Apollo himself saw very little character development in this game as he took on the same nervous, greenhorn, straight-man personality that Phoenix played in the original trilogy. The key focus of the story seemed to revolve around explaining the events that took place in the seven years since the last game, and what happened next for Phoenix Wright as seen from an outsider perspective. This worked in the story’s favor though, whenever a familiar face showed up it was always a welcome hit of nostalgia and piecing together the past events via little hints dropped throughout the game kept players guessing until the revelations in the late-game chapters. The writing and humor was definitely on-point with the rest of the series, and there were plenty of quirky characters and insane scenarios to make players feel right at home with the new heroes guiding them through the story.

There were a few new gameplay tweaks introduced in Apollo Justice, such as the ability to zoom in on and rotate most pieces of evidence, which would often glean new facts vital to solving the case. There were some added forensics mini-game sequences that weren’t present in Phoenix's trilogy, such as dusting crime scenes for fingerprints or creating plaster molds of footprints. These were a fun little diversion from the text-heavy investigations. In the courtroom, Apollo could occasionally use his mysterious “Perceive” ability to discover nervous tics and poker tells during key testimonies, which allowed him to pinpoint particular words or phrases that a witness was lying about. This was an interesting new take on Phoenix’s Psyche-Lock puzzles in the older games, and has continued on in the series to this day.

Exhibit B: A New Coat of Paint

The 3DS release of Apollo Justice features beautifully remastered graphics, much like the HD version previously released on mobile devices last year. The main selling points that set this apart from the mobile version are that the buttons and controls are mapped to the 3DS to match the original DS release of the game, and the upgraded art features a 3D layering effect not possible on your phone or tablet. The characters pop out in front of the backgrounds, and foreground details like text bubbles and the courtroom benches in turn hover in front of the characters. It’s rather simplistic compared to other 3D effects seen on the handheld, but it compliments the gameplay so naturally that I found myself playing with the 3D slider at the highest setting for almost the entire time I played. The game also features a dual language option for the first time, which allows you to play the game in either English or Japanese and affects all in-game text, voice clips and signs found in the background art and court record evidence. 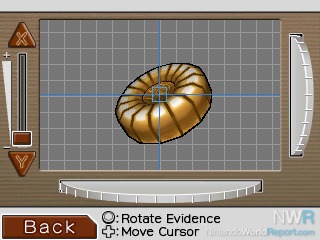 To accommodate for the widescreen orientation of the 3DS top screen, the background art has been very slightly zoomed in and cropped, so there’s some small degree of lost detail from the original version. That said, it’s hard to deny how much prettier everything looks, and Capcom have really stepped up their game when it comes to upscaling the old artwork.  I compared it with the original DS version and there does not appear to be any missing animation frames, which is a big improvement over the 3DS Phoenix Wright Trilogy.

The case is not however a runaway victory and there are are few objections worth raising. Firstly, the script is a direct cut and paste job from the original version, as players have come to expect from Capcom. Ace Attorney fans know well that the series is littered with spelling and grammar mistakes, and inconsistencies with the spelling of characters’ names. This is nothing new and while a new remaster of an old classic would be the perfect chance to correct these mistakes, but all the typos have carried through to this version as well. After all, the original Phoenix Wright trilogy has been released in English no less than four separate times and all the mistakes have never been addressed in those titles.

Secondly, those who played Dual Destinies or Spirit of Justice will remember that there was a Skip All Text option that allowed  players to fast-forward through dialogue on the first play through of their game. This option has been newly added into Apollo Justice as well, but runs the risk of letting players accidentally skip vital clues. Ace Attorney 5 and 6 also had a backlog option that let you recap entire sections of dialogue which nullified any risks associated with skipping text, and as such it’s bewildering that Apollo Justice added the text skip option from the newer games but not the backlog option. 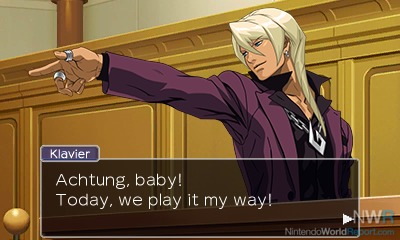 One last noteworthy detail is that the sound appears to have been noticeably cleaned up. The original DS game had some tinny crackle to the voice clips and symbol crashes punctuating the dramatic courtroom battles, but this version sounds a lot nicer, especially playing with headphones. The music seems to be exactly the same as before with no remixing or updated arrangements, but with such a fantastic soundtrack that this game and the series in general has always had, there's nothing to pout about.

If you already have the HD remastered version of this game on your smartphone or tablet, shelling out for the same game one more time on 3DS may be a hard decision to make. Ultimately it really comes down to a matter of preference. Do you enjoy the feeling of pressing buttons and drawing with a touchscreen stylus, or tapping and swiping on a glass surface with your fingertips? Do you care about 3D effects? Does the neat layout with a menu on a separate screen appeal to you? In my personal opinion, the 3DS version is the definitive way to play and having the entire series neatly lined up in my 3DS home screen folders is satisfyingly convenient; my iPhone is always full enough as it is.

If you haven’t played this game since the original DS version launched back in 2007 or never experienced the game to begin with, this is the perfect opportunity to pick up an essential chapter in a beloved franchise.  If you’ve never played any Ace Attorney games before at all, Hold It!! What are you doing reading this review? Go pick up the Phoenix Wright trilogy on the eShop first, and then we’ll talk.