Expertly blending the classic shmup feel with a modern spin. 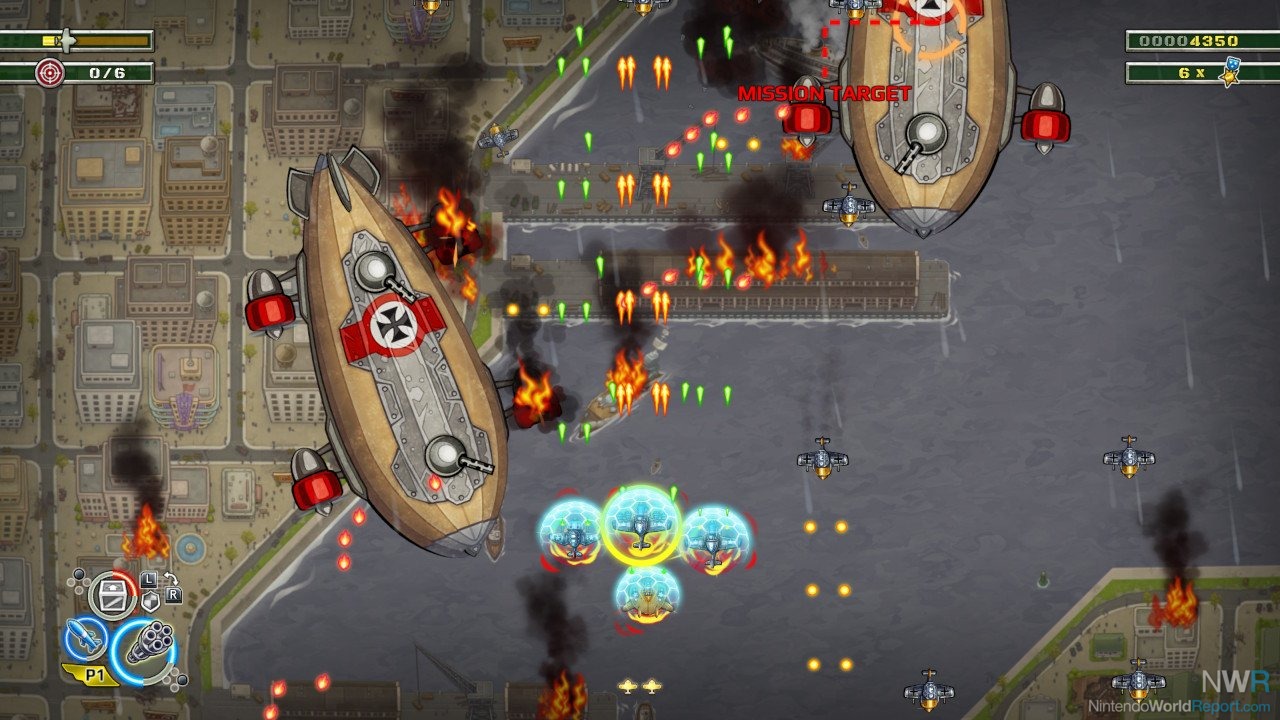 As World War II comes to a close, the Germans successfully dispatch an elite unit of soldiers known as the Aces of the Luftwaffe to American soil to wreak havoc. Luckily a small squadron of four answer the call, or so is the case in this alternative look back at history. This lays the groundwork for the events that take place over the course of five missions, each consisting of five stages with the final stage culminating in a fantastic boss battle. Gameplay consists of controlling the main protagonist while each of your three wingmen will follow your every move with each stationed to your left, right, and rear. Alternatively if you have friends to join the battle, they’ll take control of one of the wingman, allowing up to four player local co-op play. The controls are pretty standard for shmups, navigating with the stick and holding down the A button to unleash a constant flow of bullets. They’re accessible enough for players of any skill level to join in and they feel tight, which at the end of the day is the most important thing. 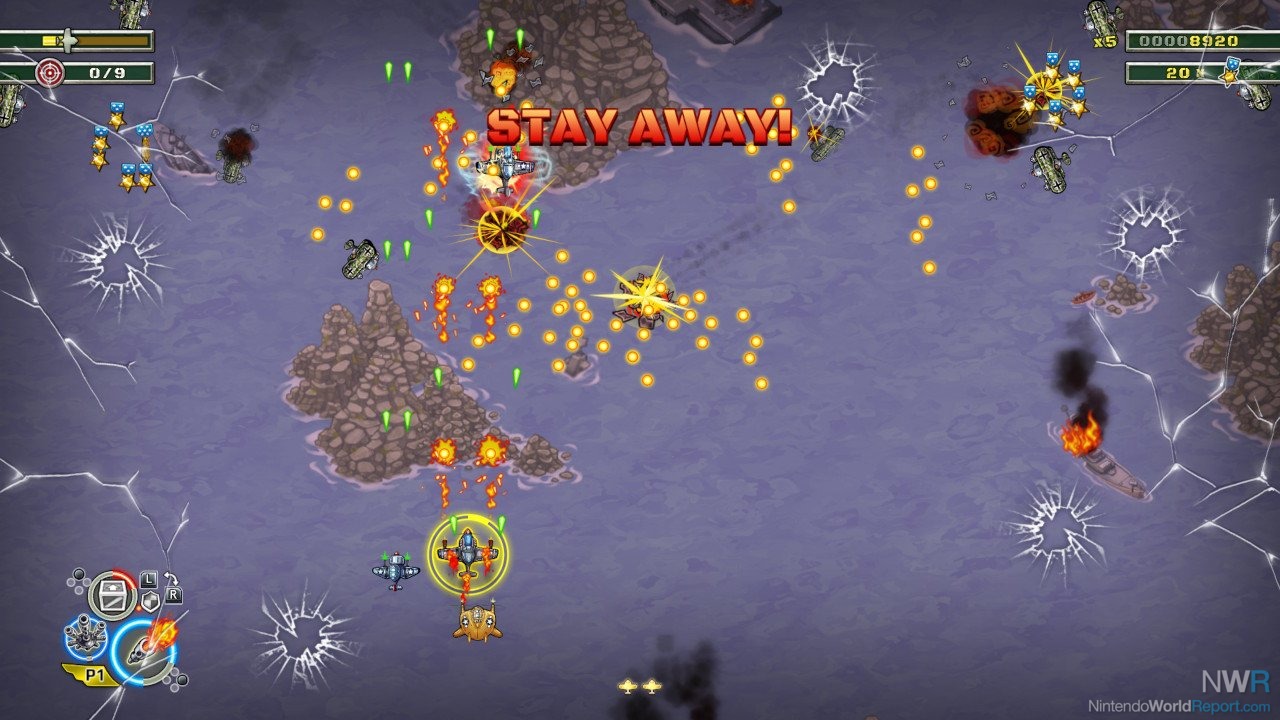 At first glance Squadrons gameplay seems to be faithful to its predecessors, a vertically scrolling shmup with a fairly standard power up system. As you take out legions of enemy aircraft you’ll randomly be rewarded with power ups that increase your plane's firepower. Continuing to stack power ups will turn your once lowly plane into a complete powerhouse capable of taking down whatever the enemy has to throw your way. However there are a few things that set it apart from its retro brethren. For starters, when you die you won’t lose your power ups, but instead you’ll respawn just as strong as you were prior to your death. That’s not to say you can just kamikaze your way to victory because you’ll be limited to a certain amount of deaths, depending on the difficulty level, before having to completely restart the mission. But what really makes it stand apart are the skill trees and earning tokens to upgrade your team as you progress. These are permanent skills that can change the tide of war and are essential for progression through the game. Early skill unlocks increase your rate of fire or critical hit chance, but later skills can produce power up drop offs at the press of a button, releasing a ring of fire from around your ship, and even slowing down time which lets you easily navigate around a crowded war zone. These skills are incredibly satisfying to unlock and mix and matching different skills between pilots becomes wildly addicting. Another level of depth is added when selecting the type of planes you pilot. Each one has its pros and cons and determining which to use can sometimes be the extra little boost you need to successfully complete a mission.

While the 25 stages present quite a bit of content, there’s a strong emphasis on revisiting missions. There are three difficulty settings, two which are available to you at the start of the game, normal and hard. I found normal to be a bit on the easier side especially on earlier stages, but hard felt to offer the right amount of challenge, only really ramping up in later stages. Upon clearing every stage for the first time you’ll be rewarded with the extreme difficulty, which is just that. Even the early stages require high level play and completing every stage on this setting should be worn as a badge of honor. What I found most fun about the level design is the diversity in how each level played. Some stages rely on a more bullet hell approach where dodging is critical and other levels would have you concentrate on taking down a few bigger enemies. On top of the main objective of clearing each stage there are always side objectives such as hovering over a certain area to drop off cargo or destroying a number of marked targets. This made each stage feel unique, keeping things fresh even as you approach the end of the game. 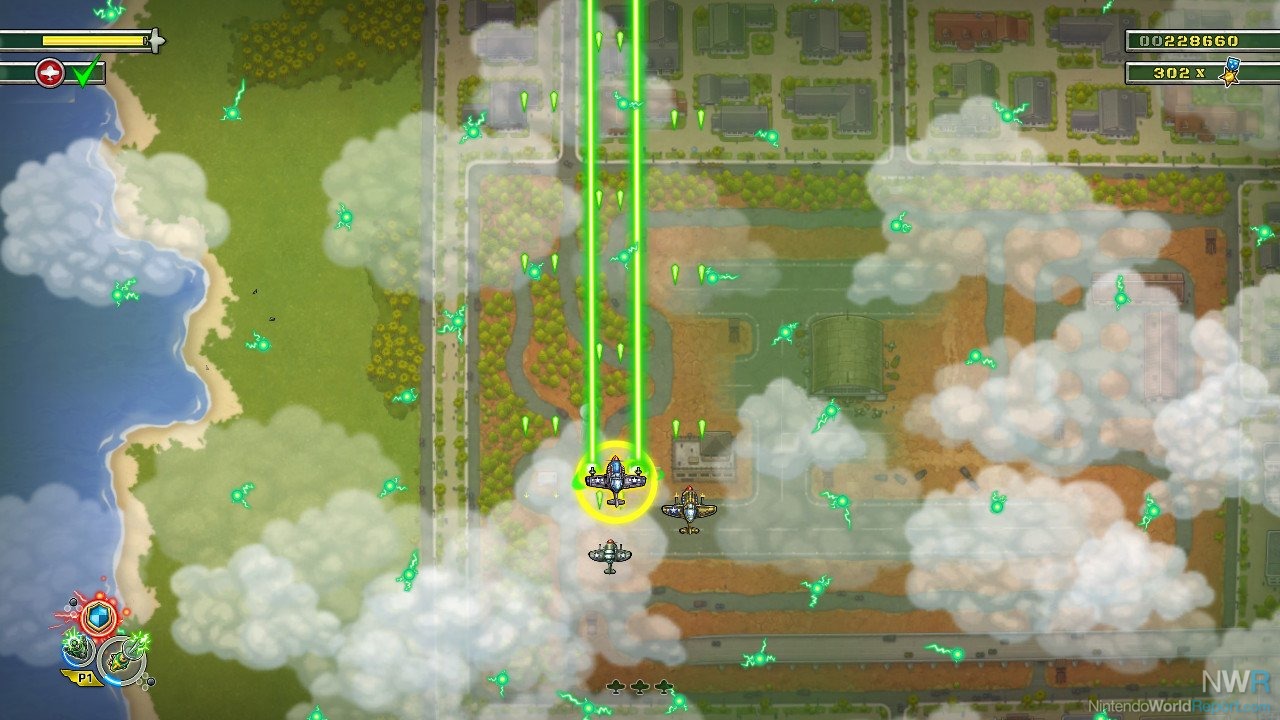 It’s apparent a lot of love and care went into crafting and polishing Squadron, which features nice visuals and a fully voice acted story. The voice acting helps build a likable cast of goofy characters each with their own quirk that will periodically take them out of the battle. One pilot is afraid of heights, so when higher altitude dogfights are taking place she will back out. Another pilot will literally fall asleep at the wheel and it’s your job to defend him. The game is charming and does a good job of keeping the feeling light hearted as you hunt down the Krauts with constant bickering among your teammates. It runs well for the most part, only in one or two late game missions did I experience any sort of performance issues. With an incredible amount of planes and bullets on the screen it got a little choppy, but didn’t cause any unwarranted deaths (I deserved to die each and every one of those attempts).

I’ve always been fond of shoot-em-ups whether it’s a classic or a fresh take on the genre, but the beauty of Aces of the Luftwaffe – Squadron is it’s ability to blend the two so seamlessly. Delivering the classic vertical shmup gameplay combined with a modern day skill tree that proves to be both fun and addictive. A fully voice acted cast of characters adds charm to the already great gameplay and well designed levels and bosses. There were a few framerate drops along the way and some relatively lengthy load times, but ultimately these are minor complaints when talking about how great the overall experience is.