Might want to forego the dock for this one.

As rhythm games with plastic instruments rose and quickly plummeted in the last decade, standard rhythm games remained in the background quietly building an audience. The Switch's newest rhythm game, Superbeat XONiC, debuted on the PlayStation Vita in 2015 and crossed to other home consoles earlier this year. The Switch runs this game well, but a lot of the experience will depend on which mode of the Switch is the focus of play. 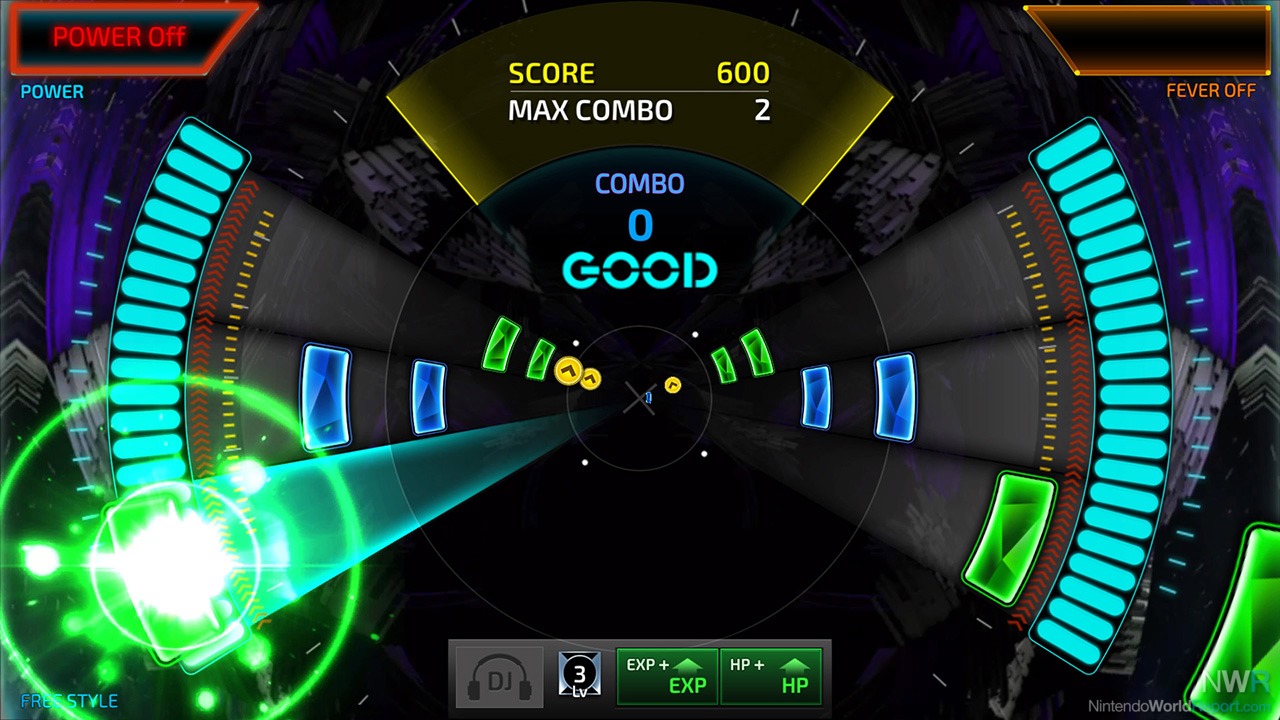 XONiC has three different difficulties, but all three follow the same pattern. A song plays and notes fly from the center of the screen to the edges, with the objective being to get a “SUPER BEAT” by pressing a button or moving an analog stick. There's a 4 track mode that uses up and down, a six track mode that adds left and right on each side, and “6 track + FX” that adds the L and R shoulder buttons to the mix. Getting at least a “Good” on the notes builds a combo, which the game tracks, and a long enough combo will activate the “Fever” mode that makes each note worth more points. The game's 60+ tracks are all sorted by difficulty, with higher pressure songs featuring more off-beat and rapid fire notes as well as more transitions from analog stick movements to button presses. Generally, I found the notes to be easier when playing in handheld mode, as I improved my average score by a full letter grade compared to docked mode where I couldn't see the controls out of the corner of my eye. (My previous experience with the Vita version may also have affected this, actual kilometerage may vary.)

Early on, there will be a lot of time spent in the Stage mode, which flips between sets of songs so as to prevent grinding on one particular tune. Playing the song once will also unlock it for play in the Free Style mode, which opens up all the songs in exchange for less experience points. There are also worldwide rankings and a World Tour mode which adds additional bonus requirements (such as not missing 20 notes over three songs) and unlocks more options at higher levels. It's a bit jarring to get a “Thanks for playing!” message after three songs, but I got used to it eventually. The level system actually can make things easier, as among the unlocks earned at level ups are DJ icons that can be used to get extra experience or provide “shields” against missed notes. Depending on the level of shield equipped, it's actually possible for the game to award a full combo with technically over 30 notes missed. It felt as though going from level 20 -> 21 was the same length as going from 1 -> 2, which is a nice change for a leveling system.

The expectation for a rhythm game is for a wide variety of music, and XONiC does not disappoint. I think the only genre not represented is country, but there is a bit of a focus on electronic music and Asian pop. The game board doesn't have a lot of graphical variety, as there's just a firework pattern behind most of the songs – the notes stand out well enough, however. For those considering the eShop version, be advised that there's not a lot of compression going on with the music (the game is a bigger download than, for example, Super Mario Odyssey at 6.2GB) and playing in handheld mode for an hour took a third of the Switch's battery down (with music at high, but not maxed).

Superbeat XONiC is stepping into a growing genre on the Switch, but its musical variety and ability to play on the TV will help it stand out even if it did cause me to look up if the Wii U's Pro Controller can work on Switch. The included soundtrack in the physical copies is a steal on its own, but this is a solid game even if you're eShopping it.

A review code was provided by actil.

Is Superbeat a series or is the similar name with Super Beat Sports just a coincidence?

Is Superbeat a series or is the similar name with Super Beat Sports just a coincidence?

It's a spiritual successor to the DJMAX series.