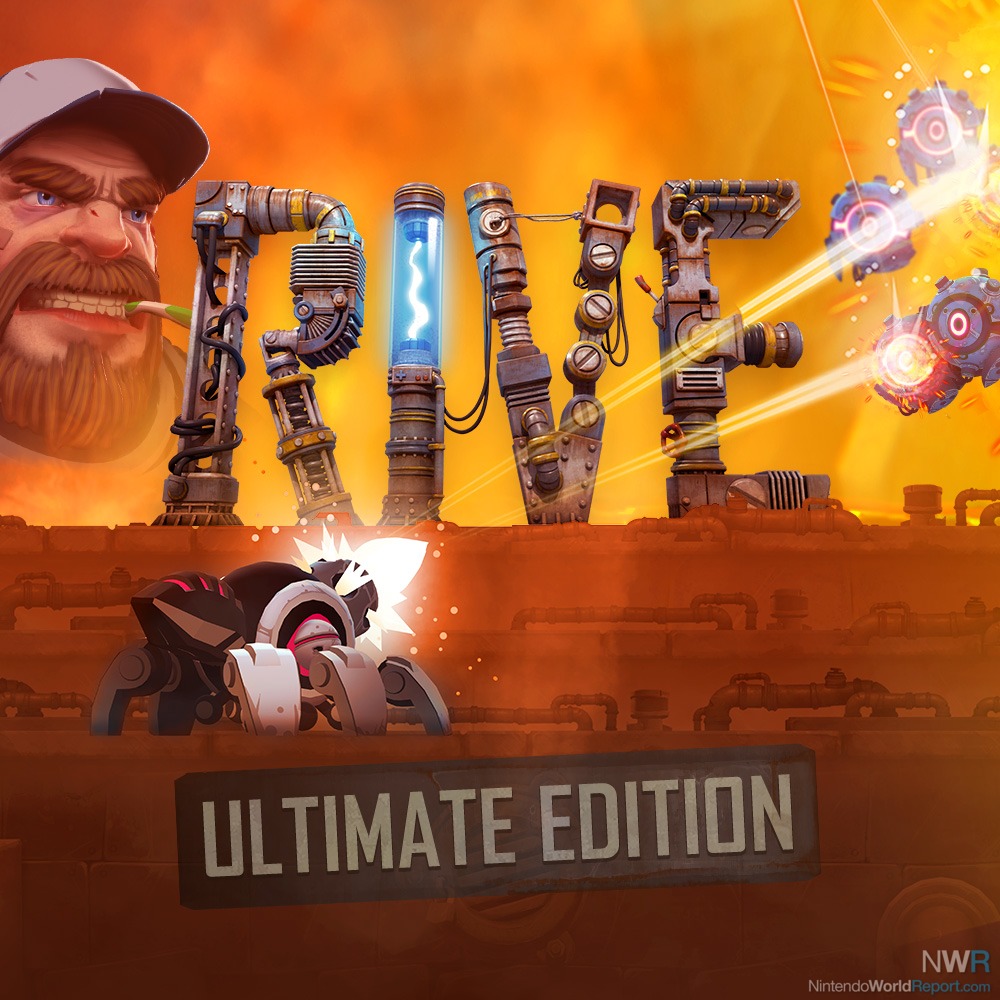 I can always appreciate when a developer aims to shake up a known formula by adding either a new element or something that generally isn’t associated with it. Naturally you run the risk of alienating fans by embarking too far off the beaten path, but fortunately Two Tribes was able to find the right blend of solid platforming with a tough as nails shoot-em-up. That’s not to say there aren’t few hiccups along the way, most notably spikes in difficulty and some hit or more often miss dialogue, but ultimately they’re minor complaints in an otherwise fun and frantic offering. 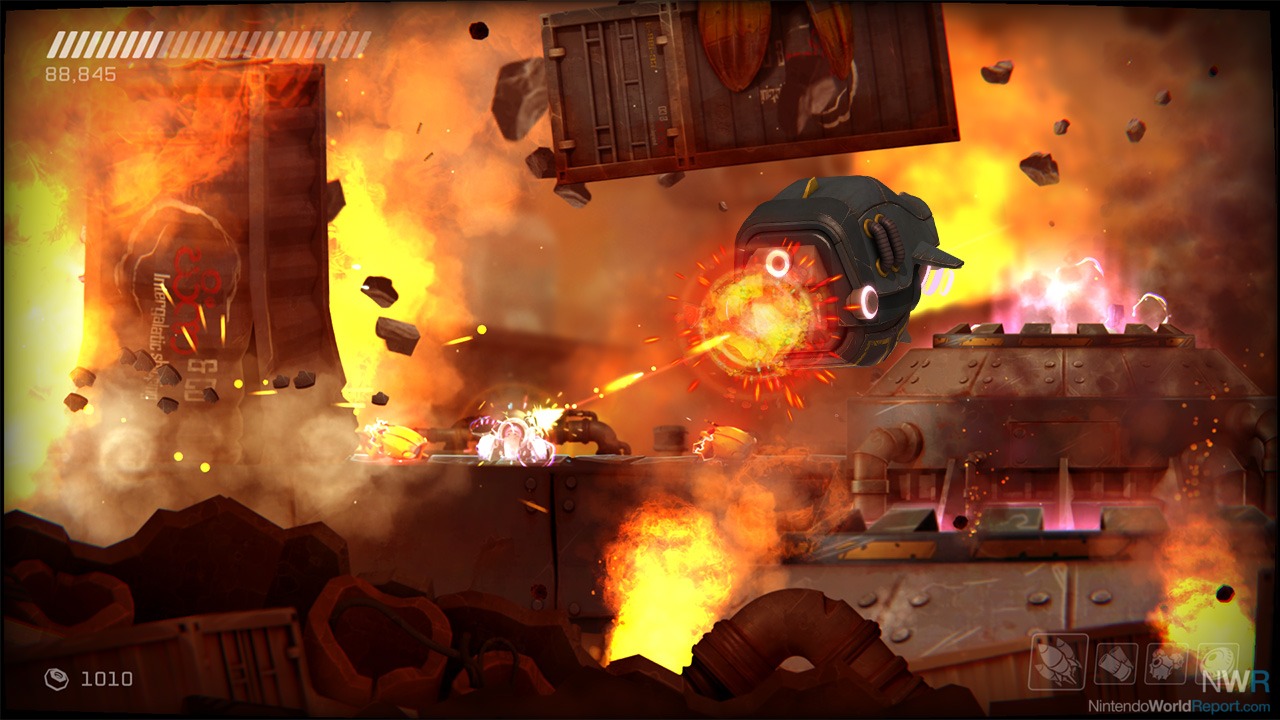 What RIVE does best is continuously change up the gameplay, keeping things fresh as you progress through the games 12 missions. At the core, it’s a twin stick shooter with a heavy reliance on platforming while constantly being bombarded with enemy fire. You’ll regularly be on the move dancing between bullets and dodging charging enemies which causes the already tricky platforming to become more demanding. Then on the turn of a dime, you’ll be flung into no gravity zones that play much more similar to a standard shoot-em-up (shmup). These sections force you to avoid asteroids and take down enemies as they fly towards you in formations, harkening back to shmups of the past. Two Tribes even goes as far as removing the 360 degree aiming in certain section, really capturing the essence of the classics. Most importantly the transition between styles is seamless due to the tight controls that feel great.

Like any good shmup, a crucial part of the experience is wrecking havoc and to properly do that, you’re going to need the tools in your arsenal. However unlike convenient power up systems, you won’t randomly find upgrades on the battlefield and then lose them upon dying. Instead you permanently unlock four different abilities by purchasing them after completing missions. When used in the proper situation, these can easily change the tide of war. Shotgun blasts are great for tight corridors with hordes of enemies and homing missiles are solid for more open areas where enemies are spread out. Abilities can be used once before needing to gather ammo, so you won’t want to spam these, but preferably save them for critical moments. In addition to upgrading your abilities, you can also boost your ships armor and range in which it gathers ammo. However the most unique ability is definitely the ability to hack. Early on you’ll hack computers to open paths for you to continue pushing forward, but eventually gain the option to hack certain enemies. These range from heal bots to literal trains. 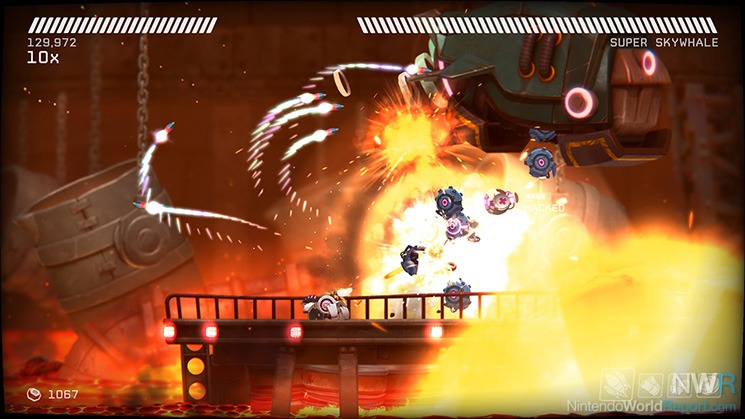 I’ll just come out and say it, RIVE is tough. You will die often, but downtime between death and restarting is minimal and there are checkpoints throughout. Sometimes the checkpoints can be a little uneven, but no particular mission is too long so it was never an issue for me. I found that outside a few really brutal spikes here and there, the game is fair. There weren’t any moments of falling into a pit you couldn’t see or running into something that automatically blew up your ship. Rather the focus was on crafting difficult set pieces that after a few deaths, you’d be equipped with the knowledge to come back and conquer the task. Some of the best moments were dealing with bosses that uniquely use the hacking ability. These fights were always challenging and felt incredibly rewarding when finally vanquishing the mighty foes.

While the main game offers 12 missions each with worldwide and friend leader boards, there are a few other modes and options to keep you coming back for more. My play through was on normal, but for those brave enough there is a hard setting which turns up the dial. There’s also a single credit mode which asks you to, what I’m assuming to be impossible, beat each mission without a game over. Challenges and Arenas are present for extra content out of the main missions. If co-op multiplayer fun is your thing, then RIVE has you covered with a different, but frankly awesome take. Instead of adding another ship, each person takes control of one aspect of the singular ship. One person will control movement and the other will man the gun, alternating after each death. While this can easily cause friendships to end, I couldn’t help but fall in love with the silliness of it all.

Visually the game looks fantastic in both handheld and docked modes. The game runs in 60fps which makes the action look crisp especially with the massive amount of things going on the screen at one time. I didn’t experience any slow down which is incredibly satisfying when playing a hectic shmup. Since most of the game takes place on a large ship, many of the areas tend to look very similar, but it makes sense to have cohesiveness among the ships different areas. Perhaps the most grating aspect of the game was the at times cringe filled dialogue. Throughout the game the protagonist is always saying one liners and some of them are pretty funny, especially the jokes that broke the 4th wall. Sadly they went back to the well far too often which left a sour taste in my mouth. After first seeing RIVE was a combination of both a platformer and a shoot-em-up, I was cautiously enthused. Often when a game tries to do too many things it can result in it not doing any one particular thing great. Fortunately my worries were put to rest as Two Tribes delivers a game that does exactly what it set out to do, blending two styles of play exceptionally well. This devilishly challenging game dishes up intense moments among a sea of bullets that will test the mettle of even the most seasoned players and that’s all before even scratching the hard difficulty setting. There are instances where spikes in the difficulty can be a little off putting, but the package as a whole makes it easily worth a little headache here and there.

I have been patiently awaiting Rive on Switch ever since the demo became available on the Wii U. Now that it’s finally out, I’m absolutely loving it. The difficult is punishing though, and at the moment I’m stuck at a boss late in the game in which I must have died 50-80 times in a row before finally calling it quits. But I will beat this game!