Admittedly it falls flat a few times. But I never really got too (card) board with it.

Wow, has it been a great year for fans of 3D platformers and collect-a-thons, or what? Yooka-Laylee, Crash Bandicoot N. Sane Trilogy, Sonic Forces, A Hat in Time, and very soon… Super Mario Odyssey! But leading up to Mario’s release, comes the debut of another charming game, Unbox: Newbie’s Adventure. 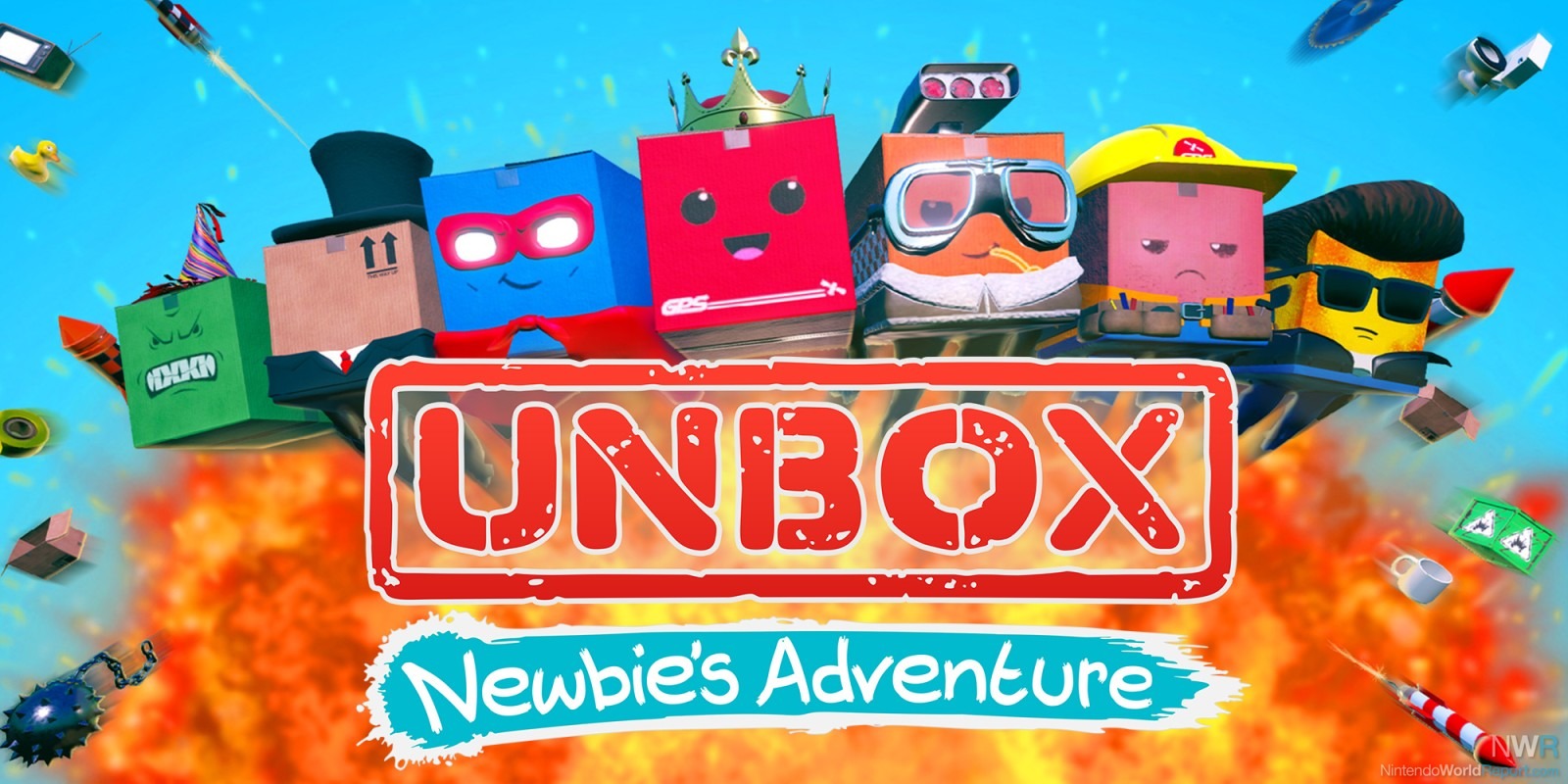 I’ve gotta give credit to this game for what it is trying to do, and where it succeeds. There are moments where I was genuinely impressed with the game, and other parts where I was left shaking my head. The premise of the adventure is that the player is given control of a brand new, sentient cardboard box that resides in the Global Postal Service. The cardboard boxes there are all self-delivering mail. They travel to three vast areas (an island setting, a snowy mountain, and the jungle) to fulfill quests of other boxes, collect items, and fight off the evil delivery boxes. 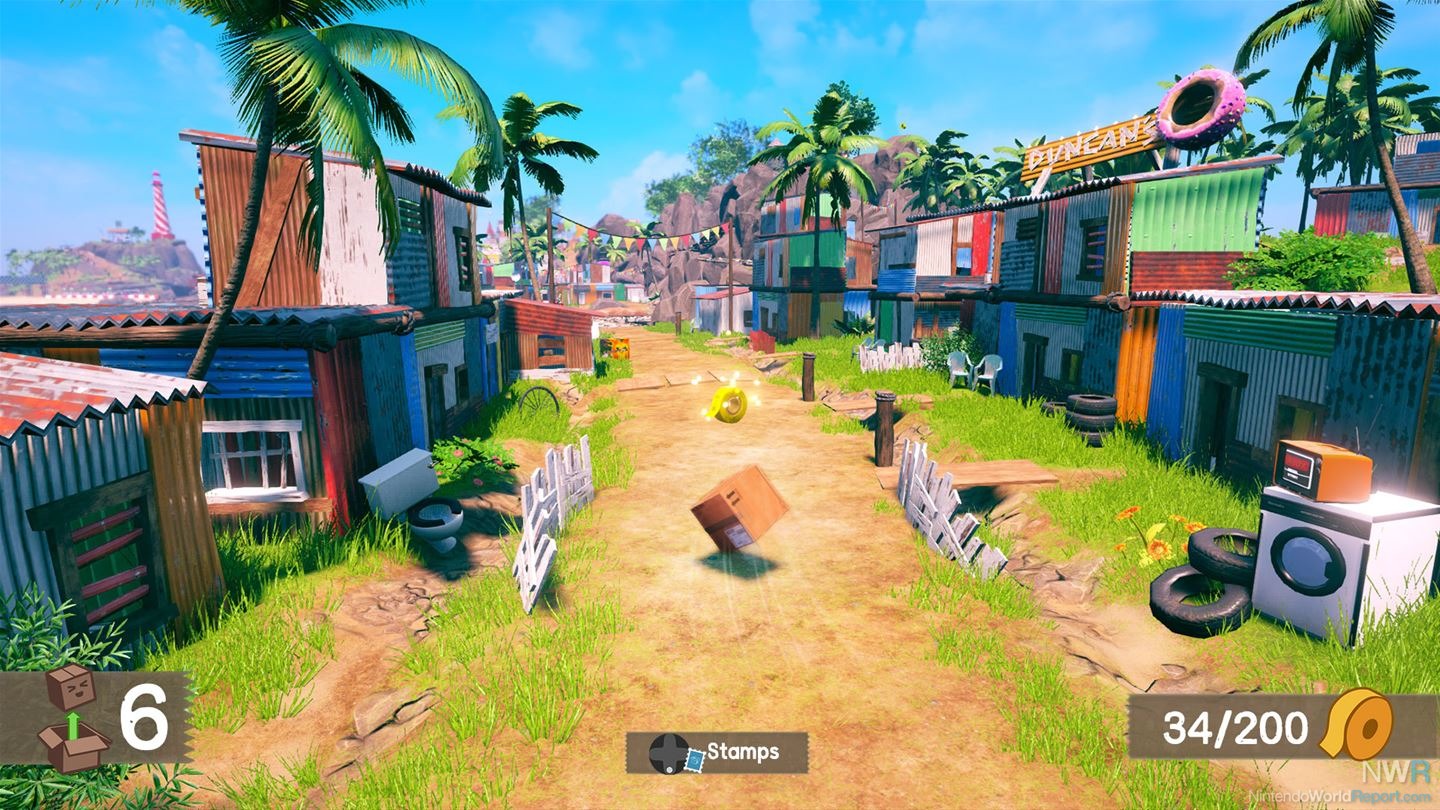 Controlling the avatar box, called Newbie, is a little awkward. It’s literally a cube rolling around. This makes basic movements like simply turning around a difficult task. You’re equipped with a double jump ability, called unboxing. What sets this aside from a typical double jump, is that Newbie can actually double jump like six times… so a “sextuple jump”, which is called Unboxing. Newbie’s unboxing ability to do this lends to some crazy travel systems. In the island setting, I found myself literally leaping from the top of one island all the way to the shoreline of another, carefully timing the jumps. It’s actually easier to get around using the jump mechanic, rather than rolling around. The rolling often lends to Newbie getting stuck in the environment, whether it be stairs, rocks, trees, or buildings. The unbox ability has it’s limits though. You can’t unbox unless you have collected small power-ups that provide the fuel for the unboxing. They’re fairly generously provided, especially in large clumps around each world, so it’s not a huge limit, but it’s enough to provide challenge in some of the timed quests. 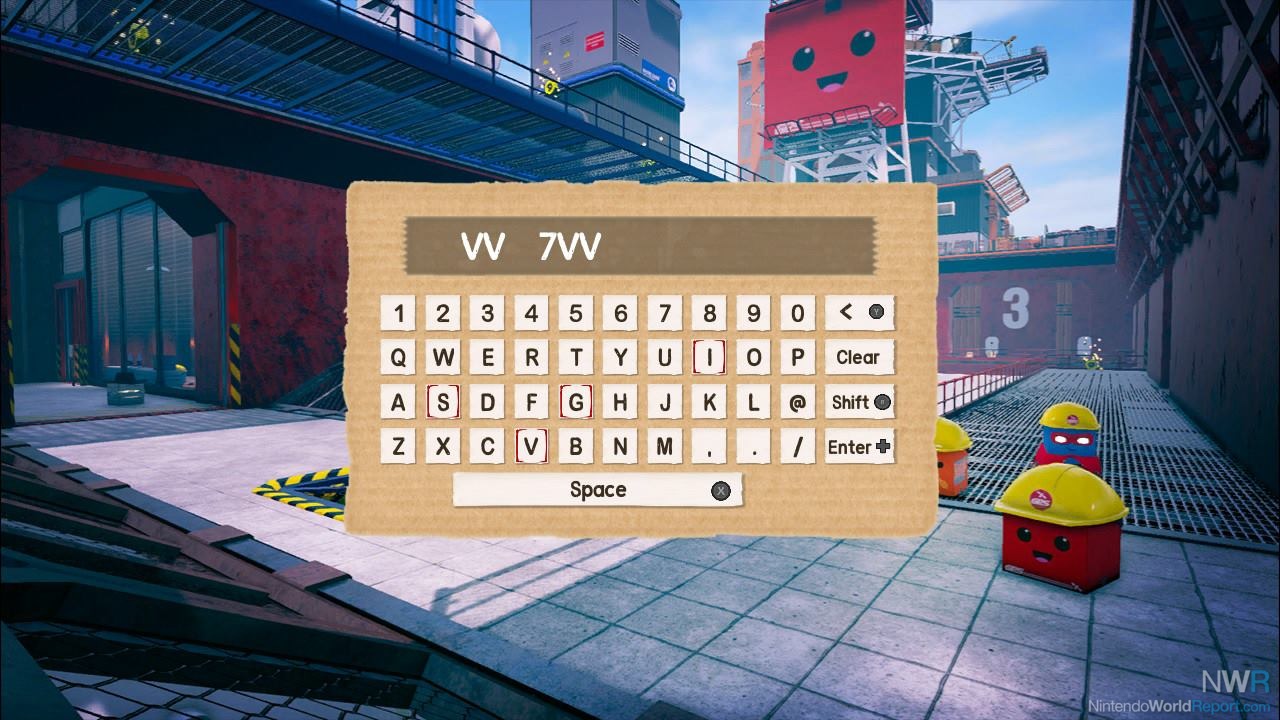 But again, this is a glitch-filled game. I really hope some bandages, duct tape, patches are put out because this adventure feels like it was rushed for delivery. When I first turned on the game, in handheld mode, I was directed to a menu to name my character (the default is Newbie). I tried to pick a name on the in-game keyboard, but the screen froze. I then opted out of the game, and docked the Switch. When I was directed to name my box, instead of using the in-game menu, the Switch keyboard appeared in it’s place. The boss fights and quests are hard because of the glitched game mechanics, not because of the design of the fight. I often found that the enemies in the game, were inconsistent in the damage they would do to me. They all tend to do a ground pound move that would sometimes either knock me a few feet away from where I was, or send me soaring into the great unknown. Beware of the camera, and the controls. You can adjust them in the options. I found the default controls to be a little too loose, and often got stuck trying to find my character as the camera got trapped on objects in the very detailed environment. Sometimes the glitches extended outside of the gameplay and UI, into the soundtrack. I found that occasionally the soundtrack would skip along or get stuck during long loading menus.

Content-wise, Unbox is in the clear. Each of the three worlds, and hub world are packed with Stamps, Master Stamps, caged boxes called Zippies, and a whopping 200 golden tapes. If you were into the collecting from Banjo-Kazooie, this is pulled right from that. And that’s just the collecting, there’s still a loose story that ties in with the Stamps (basically your Power Stars or Jiggies). Though there are only three worlds, they are ginormous and will take awhile to become familiar with. There’s a mode called Box-o-Matic, in which you can customize your avatar box. You unlock more outfits and accessories via an in-game store, using the Golden Tape as currency. It’s a fun experience, and there’s a lot of variety in the quirky costumes. There is also a multiplayer mode which has several games that are similar to the single-player quests (using weapons to fight, collecting more of something before time runs out, etc.). You can dance between a free play mode, or even create tournaments, which is nice. But just a heads up: using one joy-con is not an option, so you’ll need either a second pair or a Pro controller. 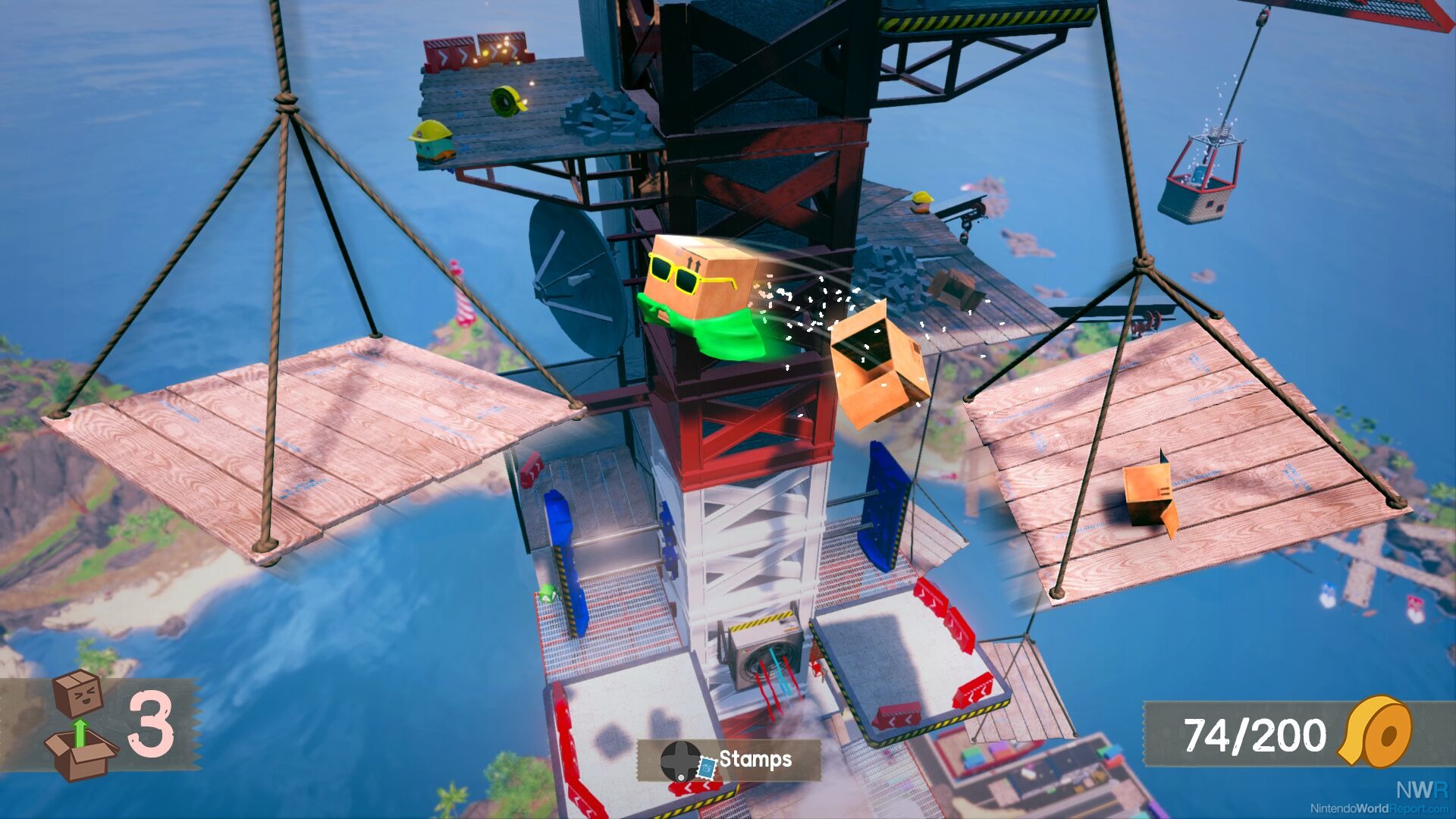 Visually, Unbox: Newbie’s Adventure is pretty good. It’s a very colorful world that uses a lot of the bloom effect. I’d call the hub world a similar look to a Splatoon Turf War stage, being out in the ocean with lots of boats, pipes, grates, boxes, and the sort. Every object is fairly simple in design, but every world is filled with models, giving it a lot of detail. If you played Mario + Rabbids: Kingdom Battle, you’ll really understand that concept. The only caveat is that again, Newbie and/or the camera can get stuck fairly easily in the midst of all of the visuals. I found that the frame rate dipped during fast movement, which is a concern because of how often I used the unbox ability to jump around the world. I found that I actually got dizzy because I was trying to focus on landing my character on a platform, but the detailed, colorful world would actually distract me when the bloom effects would blur during frame drops.

If you’re a really, really, really, big fan of 3D platforming games like myself, you’ll get enjoyment out of Unbox: Newbie’s Adventure. But with it, you’ll find frustration. I’m not in a rush to come back to it and find everything, despite all of the awesome content it has hidden in the game, purely because I felt the game wasn’t ready to be shipped (no pun intended… just kidding, it’s impossible to avoid these!). If you’re a fan of 3D platformers that are polished to perfection as in the Super Mario series, I don’t think you’ll enjoy this game. It’s got a niche for sure. But it’s a nice-looking game. The music is pretty and the worlds are fun to explore for awhile. I think that it’s a little short if you’re not planning to collect everything, so if you want a quick 3D game to explore, give it a try. Don’t expect it to be a package that delivers though. 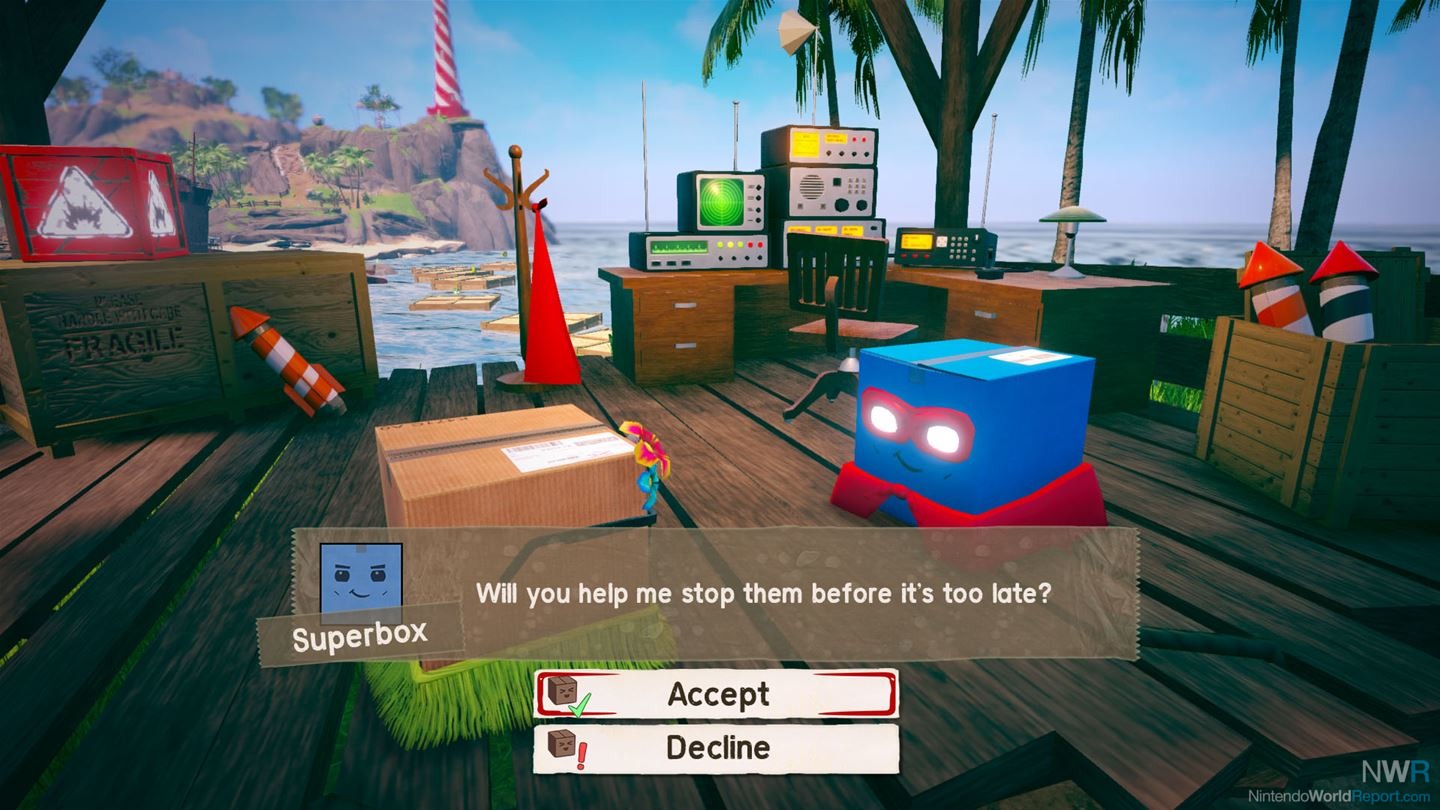