Some people want Ike and Roy in a sequel. I'll be happy with Henry.

Aside from the speed of the strategy required, Fire Emblem and the Warriors games have been quite similar. Both feature a wide variety of weapons, require the ability to adjust tactics on the fly, and feature big casts of characters. Fire Emblem Warriors is definitely the shortest game in the series, with a somewhat rote story, but the game is one of the most cathartic things I've played in years. 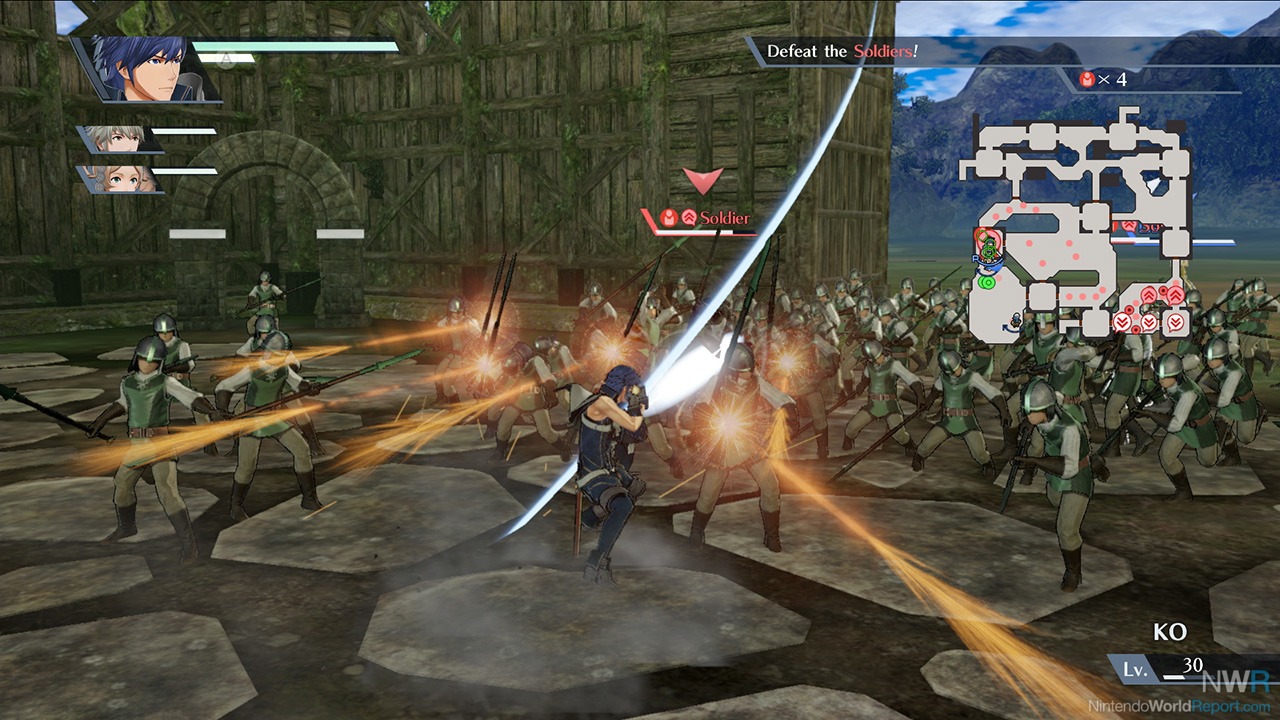 The Story mode gets off to a hot start, but is maybe a chapter or two too long even if it would be considered short for a main Fire Emblem game. The existing characters don't have a lot of room to grow, and tend to stick to slightly exaggerated versions of their original characterizations. The only exception, oddly, is the Fates character whose catchphrase was literally “I AM BETRAYAL” who remains loyal. Warriors's original characters (Rowan, Lianna, and Darios) have a bit of growth but otherwise I saw the plot twists coming from the end of the prologue. Weapon variety is also lacking in the game: because of the focus on the lords of the respective games, a plurality of the weapons are swords in a game that enforces the Fire Emblem weapons triangle. All three of the game's lance users, that are needed to check swords, are flying units that take a bit to master. There's more magic/dragon users than lances, which restricts the character choice going into a map.

Depending on the difficulty you play on, the main story can probably be cleared in 10-20 hours. A lot of the time will be spent playing through History Mode, which is the successor to Hyrule Warriors (Legends)'s Adventure mode. The mode sets up various challenges, with the end goal being the unlocking of a new costume or character. Immediately, the biggest difference between the Fire Emblem mode and the Hyrule mode is that the first map in History mode isn't 96 challenges – just a mere fifteen. More challenges do unlock after clearing it, which unlock new weapons for the featured heroes. Some of the challenges do require S ranking everything on a map, so be sure to kill everything quickly.

In playing the game in co-op, I didn't encounter any framerate issues. Both players on the horizontal split screen run at the same framerate, though it did involve losing the ability to switch on the fly and putting less enemies on screen. Playing co-op entirely through the story is possible and depending on the difficulty, recommended. Solo is easier to recommend in History mode, since fewer enemies on screen makes it harder to meet the KO requirements for certain challenges. 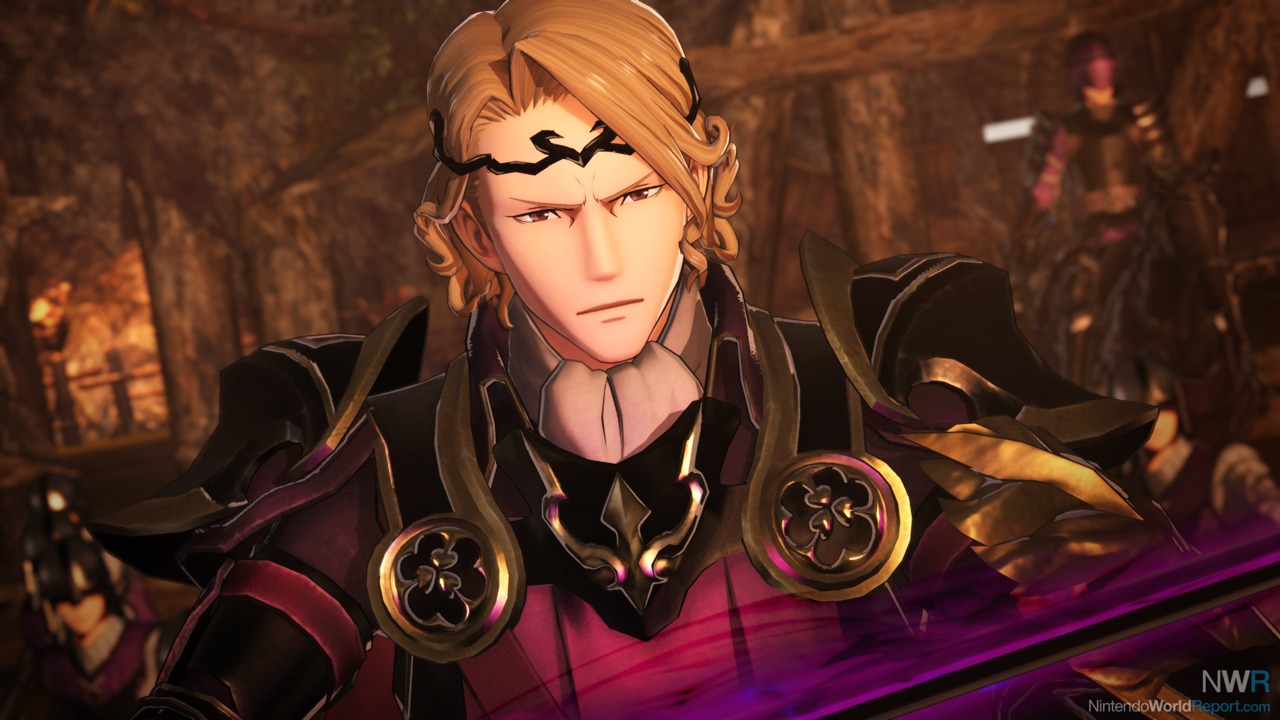 Warriors attempts to adopt a lot of the mechanics of the recent Fire Emblem RPGs, and succeeds even if they're not so much needed on lower difficulties. There's a path split when dealing with the Fates characters, and it's possible to pair up with another unit during maps to have them jump in for attack or defense as in Awakening. As mentioned above the weapons triangle is present, and if the unit under control isn't well above the enemy's level in a battle it will take forever to bring them down. I made the mistake of taking on a lance user with a high leveled sword lord in an arena-type battle (limited healing) and it took about ten minutes to bring them down.

Fire Emblem characters have never looked this good before. All of the focused units look just as they were initially designed, though the backgrounds can be a little muddy at times. Picking out items on the map might be hard for some, especially when trying to locate traditional Fire Emblem shopkeeper / DLC peddler Anna to pick up the scrolls needed to unlock her. The soundtrack is fine, though I'm curious how they got to three compact discs on the soundtrack that came with the limited edition of the game. Some of the voice acting sounds different than what I've heard from the Awakening and Fates characters, or even in Fire Emblem Heroes. Maybe it was because of the speech coming through TV speakers as opposed to a 3DS or my phone, but the Fates characters seemed especially different. Longtime fans may need a few lines to adjust.

I have a soft spot in my heart for Warriors titles because after a long day of work it's fun to take out my various frustrations on thousands upon thousands of units. The fact that it's in a universe that I've become a huge fan of and that I can take it wherever I go is a huge plus. There's a few holes in the game that the season pass might alleviate somewhat, but the core package of Fire Emblem Warriors is still worth diving into.

A review code was provided by Nintendo of America.

Sounds as expected from a Warriors game that I didn't knew existed until 9-10 months ago.


I look forward to picking it up next year. This year is too stacked with other games for me to chew through.

Not just you on the voice acting; they had to get who they could get through the voice actor strike, so a lot of cast (especially Fates) was unable to return.

I don't know why I hoped it wasn't, but it's a bit disappointing to hear that Nintendo was one of the companies that didn't agree to SAGAFTRA's initial terms. (Or whatever reason that came to be so that Nintendo is one of the parties affected by the strike.)

Just wanted to point out Nintendo was not on the list of companies affected by the voice actor's strike.


The game got back most of the original cast of both Awakening and Fates. Voice actors sometimes don't return to their roles for various reasons such as scheduling conflicts or wanting more money for a returning role.

How long does the average stage/battle last in this game?  I want to know how much pick-up-and-play value this has.

Early story stages were about 10 minutes, later ones 20 or so. The History mode has explicitly time limited/enemy limited maps where you're graded on speed.

Most of the story maps have a 1hr time limit.

Just wanted to point out Nintendo was not on the list of companies affected by the voice actor's strike.


The game got back most of the original cast of both Awakening and Fates. Voice actors sometimes don't return to their roles for various reasons such as scheduling conflicts or wanting more money for a returning role.

Oh, well, that's a good thing to be corrected on. Not gonna fault Laura Bailey and others for wanting a higher pay or having other projects. Then again, it looks like some actors are not credited for the English voice overs for Fire Emblem: Awakening. I have some shred of knowledge that getting actor credits is a weird and wild thing involving so many people and unions and stuff.