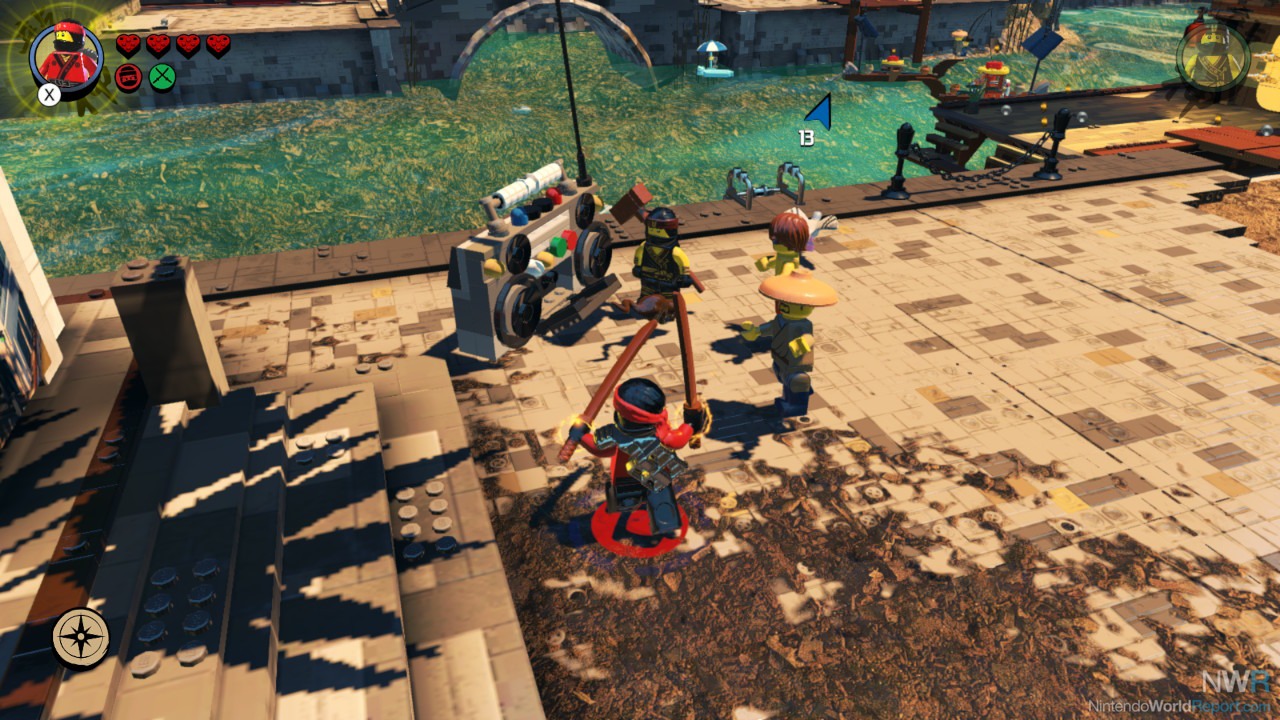 Ninjago marks story beats from the movie but still takes time to define its own world. Gone is the film’s all-star cast, replaced by solid voices doing character interpretations instead of cheap impressions. The ninjas banter and slowly grow more organically than traditional film structure could allow. This is a journey as friends as opposed to the movie’s main-character-plus-ensemble approach, giving every character a chance to be your favorite.

Somehow, the city of Ninjago is beautiful: bright colors scream “Ninja city;” shiny mechs and tall buildings shimmer in the sun; a stunning level of detail litters the street. However, too many objects are indestructible and purposeless. Levels look to be full of life but are just empty shells of potential. As the story takes the ninjas out of the city and into the “natural world,” areas lose a lot of charm. 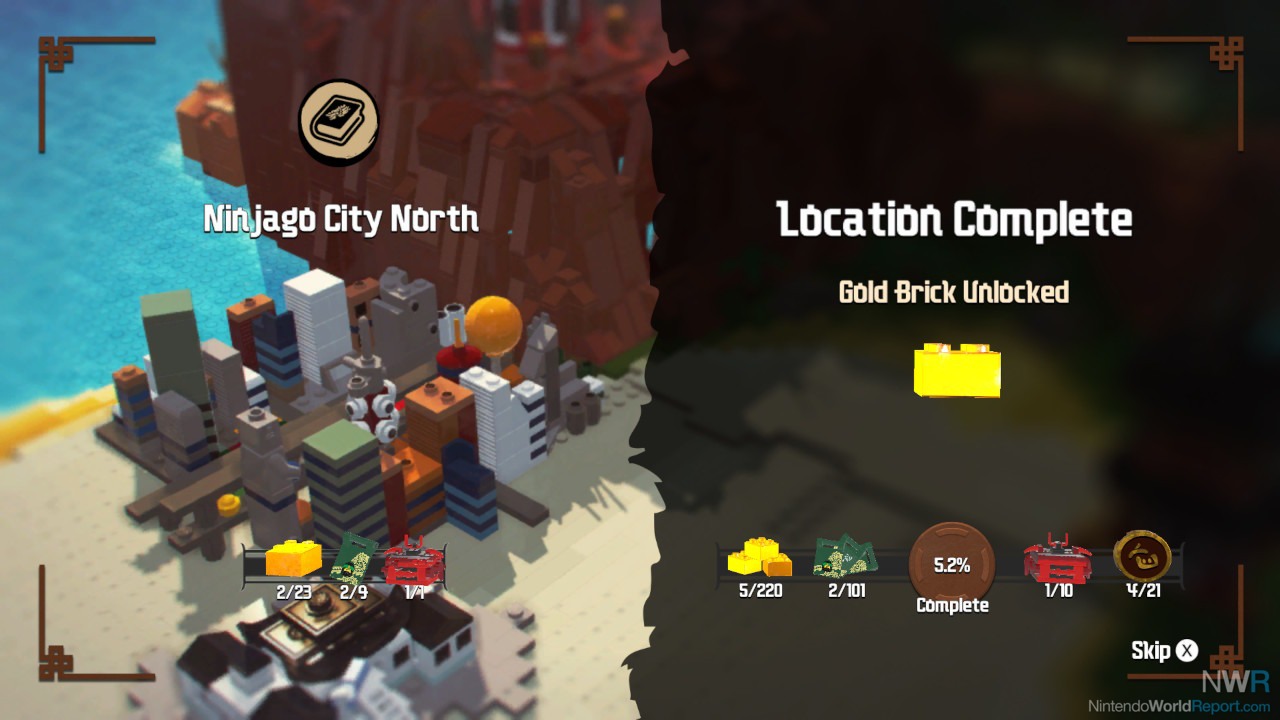 Story missions seem pretty darn linear, but the results screen always taunted me with an impossible number of missed collectibles. That’s because so many gold bricks and secret characters are locked behind puzzles only solvable by ninjas not currently in your party. This cheap tactic makes each level feel like a guided tour instead of a full level. On a second pass in “Free Mode,” levels replace the linear story mode with simple missions and the ability to switch between any unlocked character. Free mode plays almost like a different game, favoring exploration over progression. Missions range from fetch quests to kill rooms. Doors to secret areas taunt players with a gold brick requirement.

Combat seems pretty deep for a Lego game, but enemies are not a threat. Players have six different moves, each upgradable through a small skill tree, but I pretty much just used the homing attack from 3D Sonic games — until encountering the annoying red-outlined enemies. The tutorial says to mix-up your attacks, but these enemies continued blocking no matter what I used. Waiting for an opening felt more luck-based than skill-based. This was the only challenge in the game. Enemies only appeared a handful at a time throughout the story. 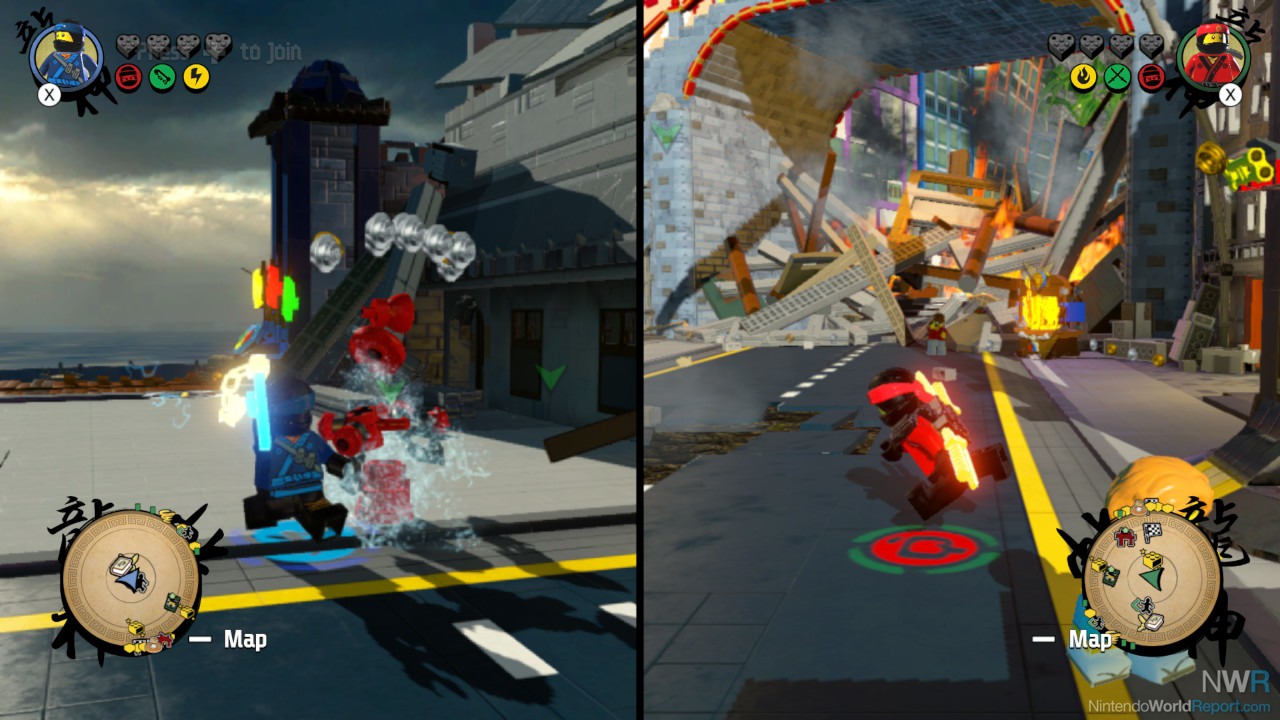 Like everything in life, a good co-op partner can really spice things up. AI partners, while technically “present” (and usually in the way), do little in enemy and puzzle encounters. Having a friend halves the tedium and doubles the laughter. A few lines of dialogue had us in stitches. Split-screen really hurts visibility and frame rate but is still the best way to play.

Ninjago’s glitches make the game an interesting canary for the Switch. The incredibly long load screen displays miniature dioramas of the world map with an odd lighting glitch that makes the sky flicker like a lightning storm. My character-switch button stopped working sometimes and the game crashed twice. I accidentally skipped a puzzle in the anti-climactic final level and triggered the final cutscene, only without the voice track. I had to wonder if these glitches occur in every version or if this was a Switch-exclusive problem. Did the movie’s release date mean the game was rushed? I was taken back to my GameCube-era youth more than once. Heart and care went into this game, but these glitches are proof that some external force kept the game from really standing out.