A fresh take on the Game Boy Advance classic with fantastic visuals and a fun new sidestory.

With no short supply of Mario & Luigi games on the 3DS, it was a bit of a surprise to see a remake of the original, especially this late in the consoles life cycle. But that didn’t stop Nintendo from bringing the game that started it all, Mario & Luigi Superstar Saga, to the 3DS with updated visuals and a newly touted side mode. At first I was wary that the changes might actually do more harm than good, but I was ecstatic to find I was dead wrong. Instead I found a game that’s never looked better and features an addictively fun side mode that helps strengthen an already great package. 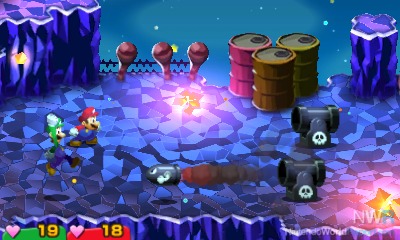 Mario & Luigi titles have always oozed charm and witty humor and that’s never been more evident than in Superstar Saga. Instead of the trite story of Bowser kidnapping Peach, we’re treated to a far stranger tale. The game opens up to a cut scene of two representatives of the Beanbean Kingdom visiting Peach with an offering to strengthen the bonds between their kingdoms. However it’s revealed to be a farce and the two steal Peach’s voice, replacing it with exploding speech before making their exit. This lays a bizarre framework for the story, but as you venture forth into the Beanbean Kingdom and meet a slew of interesting characters, you can’t help but fall in love with how strange it is. A unique and diverse cast of characters helps to enrich the world as you explore, making it seem full of life. The dialogue between characters, no matter how unimportant they seem, is always littered with comedic flavor encouraging you to interact with everyone because you’ll never know what outrageous thing they might say. 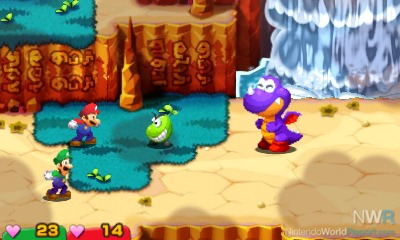 Although not a sequel in name, the roots of the battle system can be found in both Super Mario RPG and Paper Mario. Battles are turn-based, but what sets it apart from a run of the mill turn-based system are the action commands. These commands require a properly timed button press right before attacking or being attacked and can prove to be the difference between life and death. While the offensive timing for your jumps and hammer attacks are pretty standard, playing defense is an ever changing challenge. Each enemy type has different attacks with their own required timing to properly defend or evade it. Entering a new area and having enemies kick your butt is common, but gradually mastering your dodges and eventually becoming untouchable is an immensely satisfying feeling. Another major element of the battle system are the Bros. Attacks which are big damage techniques. These attacks require a series of properly timed actions by both Mario and Luigi as they work together to unleash fury upon their enemies. As your progress through the story a constant flow of Bros. Attacks will become available to you. I found myself overjoyed when learning new attacks not only because they are extremely useful for boss battles, but because they are just downright fun to use.

For as much time as you spend duking it out with enemies, you’ll spend just as much if not more exploring and traversing the world. You simultaneously control both Mario and Luigi using either the d-pad or circle pad, but each can act independently with the use of the A button (Mario) or B button (Luigi). Platforming starts off limited to familiarizing the player with jumping separately, but as more new commands are unlocked they continue to push the limits. Slamming Luigi into the ground to bypass gates, jumping on each other shoulders to get to higher ground, spinning through the air, or even shrinking Mario to half size with a hit from the hammer. There’s a wide selection of commands and each present fun and interesting puzzles and platforming to overcome. One drawback to having so many abilities is constantly needing to shuffling through them by using the L or R buttons. I found myself shuffling through these abilities quite often which would grow tiresome in the later parts of the game. There is an option to use the touchscreen to choose your command, but at the expense of the map being shown. 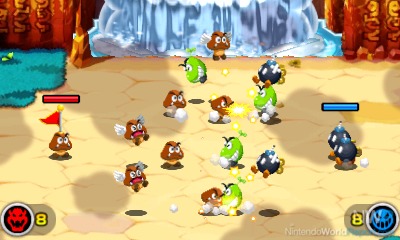 Minion Quest: The Search for Bowser is a brand new storyline added to the remake that runs concurrently to the main quest, giving us the perspective of a lowly minion on a search for Bowser. Along the way you’ll also encounter characters from the main story and you’ll be treated to what they’ve been up to while off screen. This mode opens up to the player pretty early after hitting a certain spot in the main game and presents a completely different playstyle. The goal is to find Bowser, but in order to do so you’ll be thrown into battles with brainwashed minions that have fallen under Fawful’s control. There are three types of minions; ranged, melee, and flying, each with a strength and weakness. Melee is strong against ranged, ranged is strong against flying, and flying is strong against melee, which results in a rock, paper, scissors rule set. Preparing your squad is the most vital part of each battle, but luckily you’ll know what type of enemies you’re up against prior to each battle. Upon entering the battle minions and enemies will automatically fight one another, but that doesn’t mean you won’t participate in the fight. You’ll be in charge of handling action commands and captain commands, which are special abilities such as cancelling an enemies attack, boosting your troops moral, or even an option to call for backup. Winning a battle results in your team members gaining experience and a chance at recruiting new minions. Mixing and matching your teams is crucial to your success and surprisingly is a lot of fun to do. At first I figured this mode would be something I’d brush over, but it turned out to be a satisfyingly deep mode that offers hours of content. It is a bit on the passive side, but I’d find myself switching over from the main game to play a few battles and losing myself to clearing a full map. 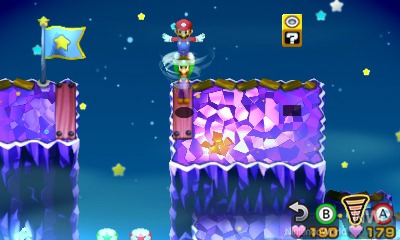 The most obvious point of reference for a remake is how the game looks opposed to how it used to look. Initially I was concerned that the original artstyle would outshine the updated graphics, but that worry was quickly put to rest. The game looks absolutely phenomenal, especially the environments. There were countless times I found myself stopping to just admire how great everything looks. Which left me dreaming of what could have been had they taken the time implement stereoscopic 3D. While the leap in visuals provides a significant upgrade, the difference in music wasn’t as noticeable. Yet it still manages to deliver a fresh take on the classics which I thoroughly enjoyed.

When undergoing a remake of a classic game, you always run the risk of alienating fans who might dislike the changes made. Fortunately Nintendo was able to keep the heart and soul of Mario & Luigi Superstar Saga while injecting new life into it. Not only do the visuals look stunning, but with a hearty side mode that adds more context to the story, this is easily the best way to experience the game. It isn’t perfect and there are a few things I would have loved to have seen, mainly stereoscopic 3D, but this gives players a great reason to pick up their 3DS’ again.

I can't speak to how the Wii U VC version of the game runs, I know some emulation on Wii U isn't perfect, but I can't personally speak on that. As far as the new version I really enjoyed the visual updates, but I think the original still look nice and as I said in the review, music pretty on par just with a slightly updated feel to it.


If the Minion's mode doesn't interest you, it might be worth exploring the VC option for the sake of saving all that money. There are some smaller things like being able to hold R to fast forward through some cut scenes and things which are nice too. The biggest thing that'd personally keep me away from the VC version is the lack of portability, but that really depends on your style of play. Regardless it's def a game worth playing! 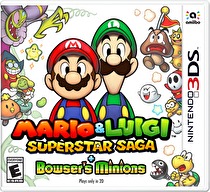