Ironcast is a steampunk turn-based strategy game with match-three puzzle elements and somehow that all works out nicely.

Ironcast is an intriguing hybrid-genre game, blending match-three puzzle games with turn-based strategy together in a light rogue-like setup. At face value, it can be seen as short. Once you figure it all out, a successful run can be done in two or three hours. However, being a rogue-like in nature, death is a constant, and when you perish, you have to start from the beginning. The gameplay is, luckily, fun enough to hold up to repeated playthroughs and stays varied throughout to be compelling for however long it takes you to luck out and get through the travails of your hero and help turn the tides of the steampunk 19th century British and French war.

Most of the time you control your general and their mech-like Ironcast, you stare at the puzzle board, trying to make chains of different icons, all representative of attacks, energy, coolant, repair, and more. The core four are most used, though, as that is how you make any action. Energy is related to your defenses, coolant is used up when you make any action, and attack and repair are self-explanatory. Other icons appear a little less often, including scrap, which is used for upgrades, and overdrive, which is used to boost your attack.

All of these matches and actions combine with different abilities, both active and passive. Some passive ones increase defense or increase the appearance of certain blocks. Active abilities need time to recharge after use, but those can gin up some shields for free or change a block type into another. Some abilities are baked into your general and Ironcast, but the rest appear randomly as you level up. It helps keep each playthrough unique, as it’s wise to let your abilities dictate your Ironcast’s focus, but sometimes you’ll get bad luck with your abilities and, especially as you get deeper, some runs will meet a slow and laborious death before you ever really had a chance. 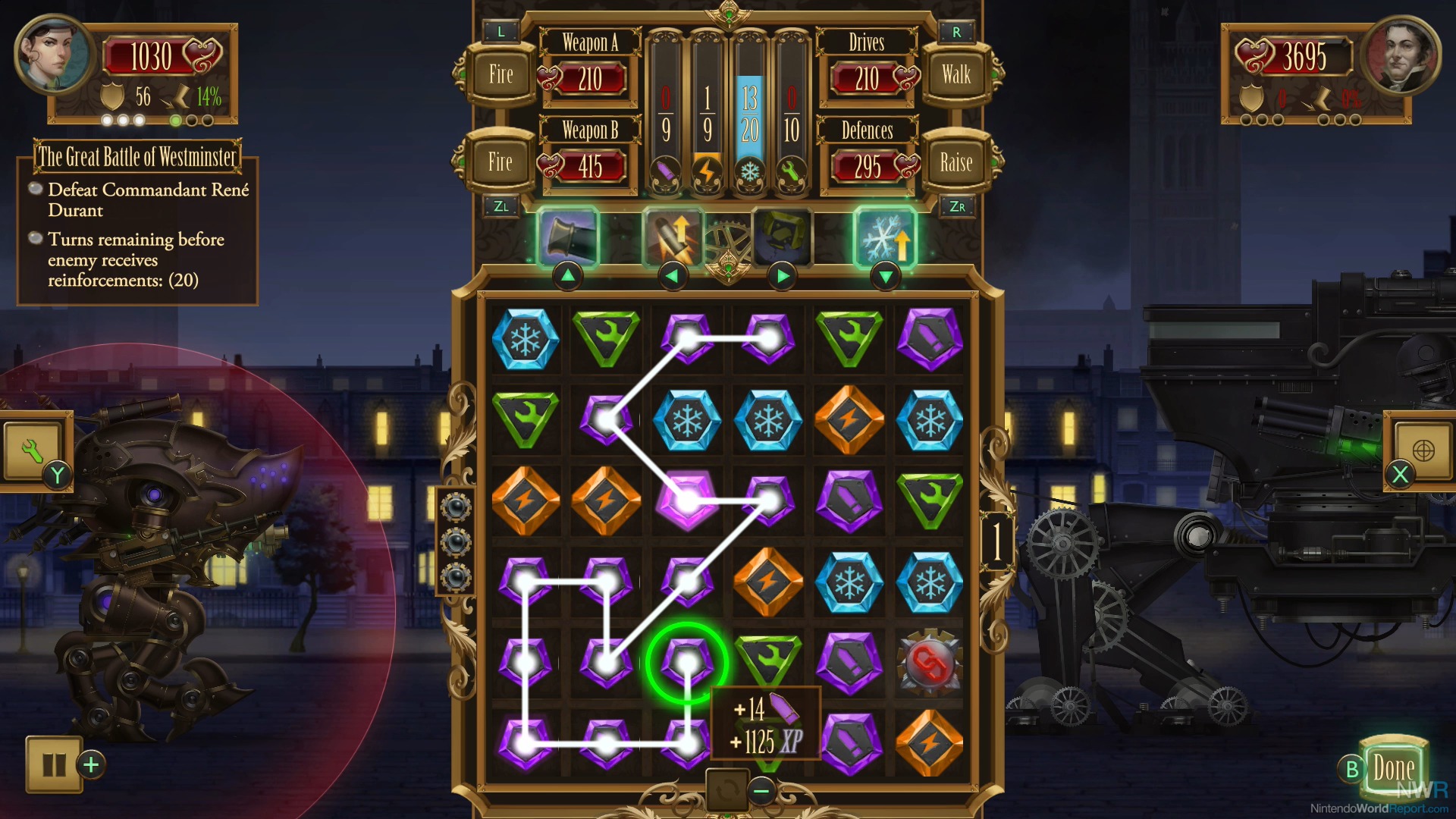 The mechanics are mostly obtuse at the outset. Even after the hand-holding tutorial, it didn’t all click right away. Ironcast started to gel together only after my first few failures, mostly because the ins and outs are complex. The main thrust are procedurally generated missions, which are used to strengthen your weaponry and abilities so the final boss of the area is less difficult and you have more firepower to take them down. The missions vary between four different types. Battle requires you to defeat a foe within a turn limit, Survival requires you to last for a certain amount of turns, Collection requires you to collect crates during the battle, and Trade leads to a non-interesting choose-your-own adventure negotiation that features just about nothing that the game excels at. The three action-oriented mission types each prioritize different gameplay elements, as Battle relies on offense, Survival on defense, and Collection on good match-three puzzle skills. The variety is nice, but unfortunately, the Trade mission highlight my least favorite part. The story of Ironcast is often thrown in your face through a lot of dialogue.

While I dug the general steampunk setting, I can’t say the writing and dialogue ever stuck with me. After a certain point, I just skipped through 90% of it. With how often you repeat sequences and missions, it all gets old fast. I don’t care about this world and its war; I just want to match colored gems so I can blow up the other guy as efficiently as possible. Since efficiency was my goal, I relied more heavily on button controls because while you can play all of Ironcast just using the Switch’s touch screen, I don’t recommend it while selecting puzzle chains if you have bigger fingers. 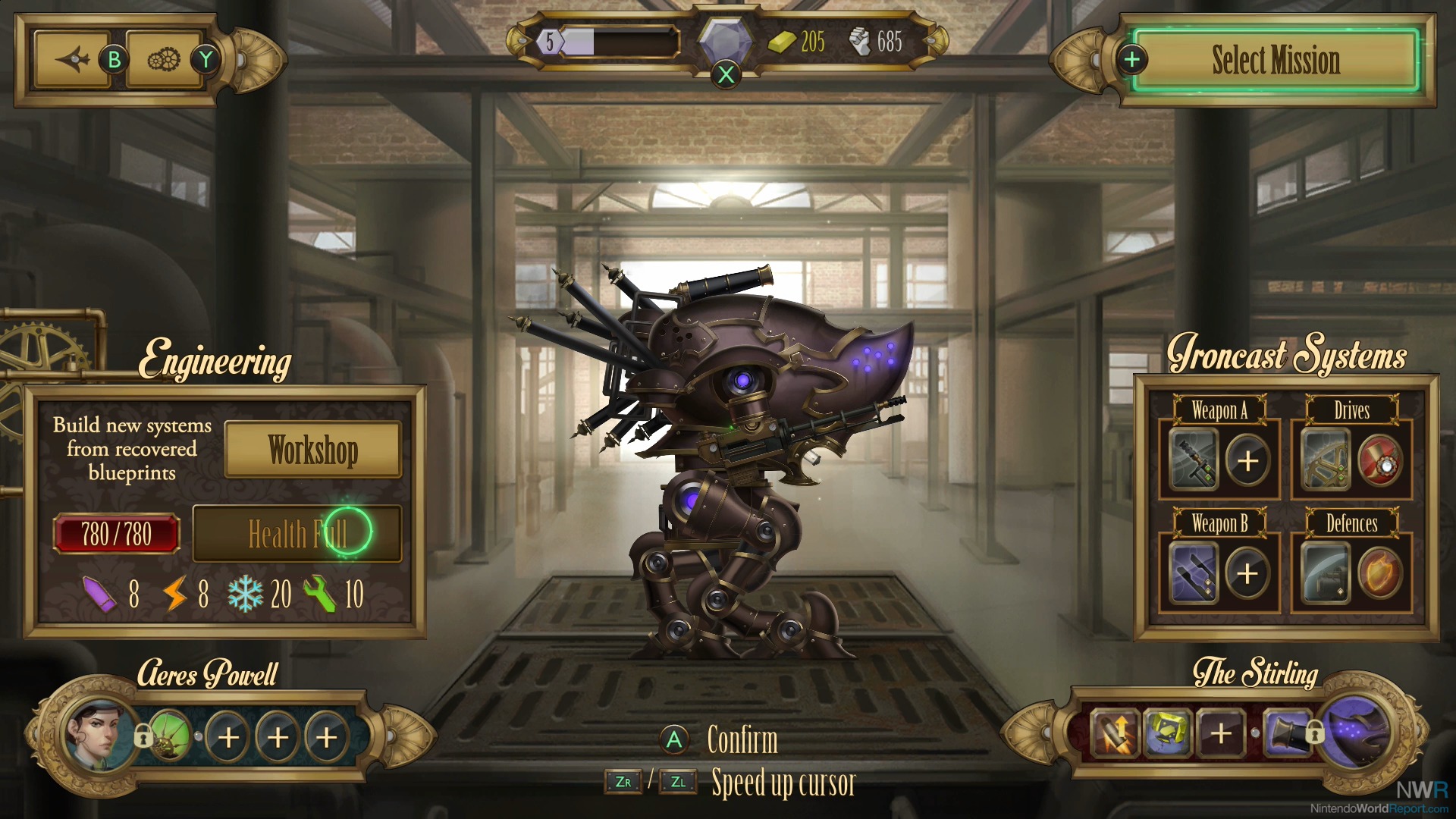 In between the missions, spoils and experience can be used to upgrade your weapons, defenses, abilities, and more. I preferred to focus on defenses, as staying alive is oft more important than any other element. Focusing on weapons can be fun, but with the way defense works for enemies, super strong weapons can be too easily negated, leaving you perilously open to attack if your luck goes sideways. Skill and strategy is required to do well, but at a certain point, so much of your success is determined by luck, whether it’s the layout of the board or the randomness of the abilities and enhancements earned between levels. The challenge of succeeding with a bad draw is sometimes appealing, but with the punishment for death making you start all the way over, getting hit by some poor luck deep into a run is maddening. When you do die, you earn Commendations that can be used to unlock more generals, Ironcasts, abilities, and boosts that can be used in subsequent runs. These unlocks are a nice way to make replaying the earlier segments easier while also giving you more variety in terms of perks and abilities.

Depending on your skill and luck, Ironcast can be a fun 10 hour or so romp, fraught with many failures but likely numerous last-second victories and absolute dominations. The mixture of turn-based strategy and match-three puzzling is novel and for the most part, works extremely well in the rogue-like permadeath structure. The tedious and humdrum story can be tiresome, but if you focus on honing tactics to take down your rivals while building up your gear and abilities, Ironcast is a fantastic and unique game.