While it may look like just another Threes clone Levels+ has a strategic twist that will keep puzzlers engaged, at least for a little while.

At first glance, based on the limited description and screenshots, I wasn’t quite sure what to expect. I’d somewhat assumed Levels+ is one of the many variants on the popular game Threes as seen out in the mobile space. To a degree that assumption is correct, but there’s another layer of strategy it adds to the mix. There’s more involved in Levels+ than in simple versions of this type of game and so, in that regard, it is a pretty challenging and good time if this is the sort of experience you’re seeking for the Nintendo Switch. 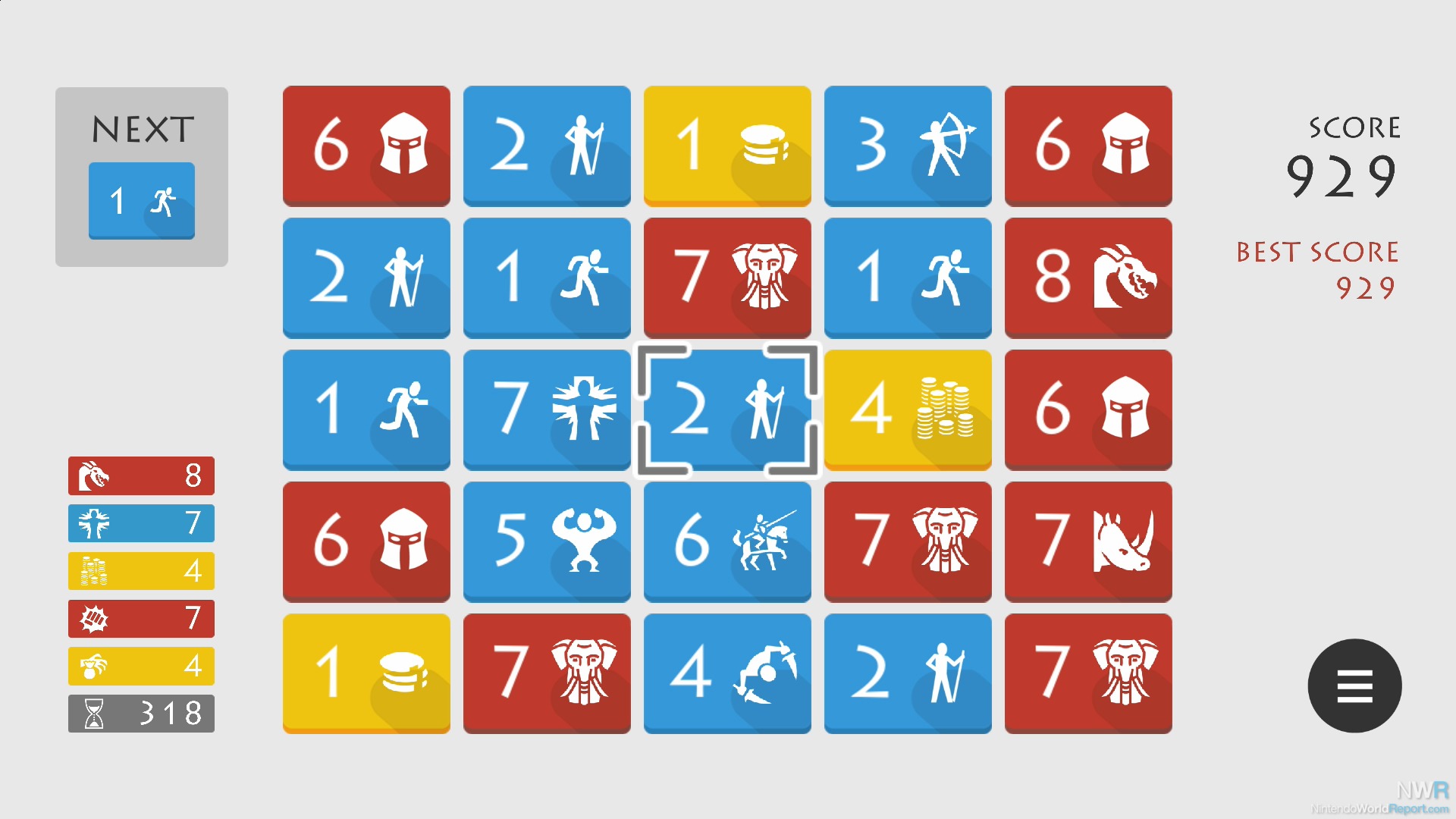 The hook in these types of games is that you’ll need to combine your like-numbered pieces to create a single piece of the next numbered rank up. With that in mind it becomes an exercise in carefully trying to control where your numbers are. Periodically you’ll then look to combine a series of pieces, buy yourself some room to work in, and roughly continue the cycle until you run out of moves.

What Levels+ does, and I personally haven’t played a variant like this before, is add to the challenge by differentiating blue “attacker” pieces, yellow “points” pieces, and red “enemy” pieces. The blue tiles are able to both combine with other blues of the same number or overtake yellow or red pieces of the same or lower number. Yellow pieces can only be combined with other yellows in order to increase their value. You can only remove red pieces by using a blue piece of a high enough level. The flow in how you choose to manage the order and execution of your moves will help determine your success. Your attacks and combinations will ultimately have less to do with “making a play” and more to do with how making that move at the right time will set up an opportunity for another piece.

As I said this style of play, in general, is reminiscent of other games I’ve played but the colored pieces substantially alters how everything plays out and is a refreshing twist! There is quite a bit of strategy to the game, especially in regards to how you level up your yellow pieces. Rather than simply running them over because you can, there is a strategic component to combining them first in that you’ll gain a higher score the higher the yellow tile value is when you finally take it with your blue tile. Of course the higher level it is, the higher the level your blue piece will also need to be so you’ll need to be cautious. In addition I’ve run into at least one hidden power-up that you can permanently unlock in the game once you’ve leveled a yellow piece up to six and consume it, so there’s an added incentive to try to get your level up for that purpose as well.

Getting past the core game there’s nothing more of note. There is only the one mode, though in theory you could play it endlessly and try to top your highest score. It can be played either with the controller or with the touchscreen, though I will note the pace you can play in touchscreen mode can’t get too fast or you can either have issues executing moves or sometimes you’ll get a move you didn’t intend. This only happened periodically and I had a hard time telling if the issue was just me not being precise with my fingers or the game having an issue, but it is worth noting. I found controller play to be perfectly workable and fast so I generally have stuck with that style. About the only other complaint would be that the loop on the music track is very short so over time I may recommend simply turning it off if it gets grating.

With all of that in mind, if you’re looking for a light puzzling experience you can just pick up and play semi-thoughtfully for a while Levels+ is better than other games of its kind that I’ve played on other devices due to the added complexity. As a budget-priced offering the question ultimately becomes whether this is the kind of game you’re looking for. If it is, and you understand that the goal isn’t to “win” but to challenge yourself to continue to try to up your score, I’d say this is a worthy purchase.