The young Switch’s first summer is a bit wanting for single-player content. Oceanhorn: Monster of Uncharted Seas offers a charming adventure with old-school roots that can easily kill a long weekend or a series of flights. The island-hopping nature of the game will bring up strong Wind Waker memories for many, but Oceanhorn is quite different and stands on its own. 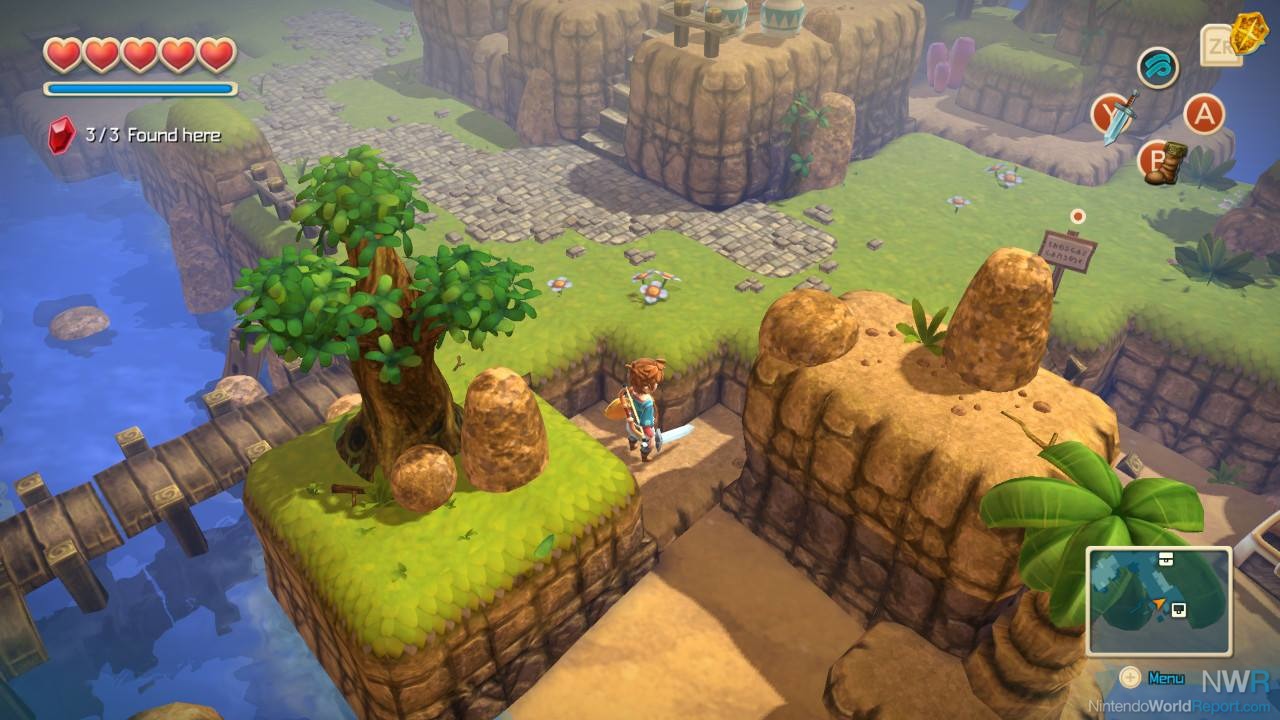 The unnamed hero, simply called “kid,” is left a notebook and a destiny by his father. His bloodline has been chased by the titular robotic monster Oceanhorn ever since the apocalypse left the world in ruin. The hero must gather three magical objects spread across the islands to defeat Oceanhorn and restore the world.

Each island combines puzzles, combat and exploration from an isometric perspective. The majority of Oceanhorn’s 17 islands are expansive, letting players get a bit lost in each unique setting. At first, exploring the major islands felt overwhelming and organic, but hindsight showed the paths to be more guided than I thought. Treasure chests and collectible “bloodstones” hide just out of view, so a keen eye is still rewarded. Sailing between islands is a self-driven shooting mini-game with zero depth. 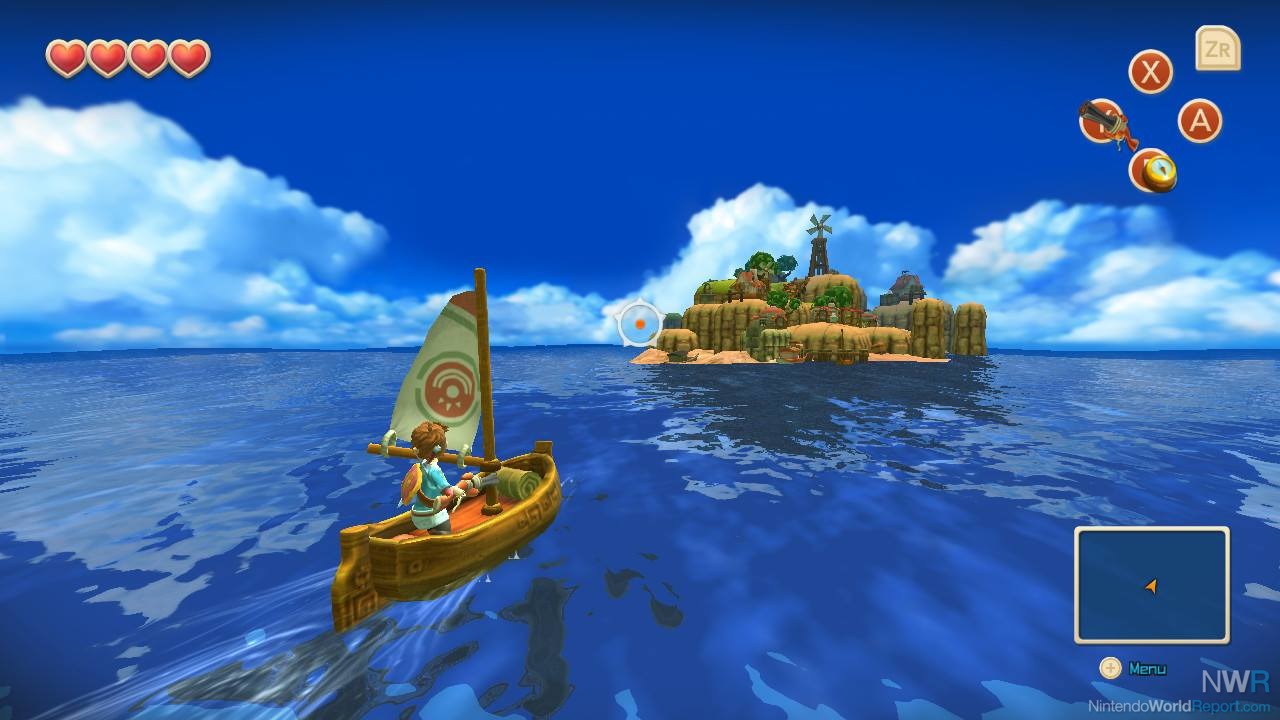 Combat is unremarkable but for one aspect: a level-up system. Enemies and challenges give experience, and each level-up unlocks minor abilities like an expanded quiver or lessened magic costs. None of these abilities really changed my gameplay, but the mystery of what was to come kept me engaging enemies instead of slipping by. The hero gains a bow, bombs and five magic spells on his journey, but I stuck almost exclusively to the sword and shield. Magic spells are cast with X and items are used with B, and both are cycled through in real time using buttons on the D-pad. The item I wanted never seemed to be equipped, so I’d have to hide in a corner or stand there taking damage while I cycled. Pots and other items are littered everywhere and can be satisfyingly chucked at enemies, too.

Although unsurprising, I didn’t know Oceanhorn was a port of a mobile title until researching the game further. I appreciated the smooth framerate and cartoonish art of Oceanhorn even if it isn’t a graphical showstopper. The characters are a bit ugly in cutscenes but look fine from above. The cutscenes and island introductions are fully voiced, and some dialogue is just this side of tolerable. Luckily, the father has most of the lines and has a stellar actor behind him (Ray Chase). The music by Nobuo Uematsu, Kenji Ito and Kalle Ylitalo deserves praise for capturing a strong sense of adventure across multiple moods. 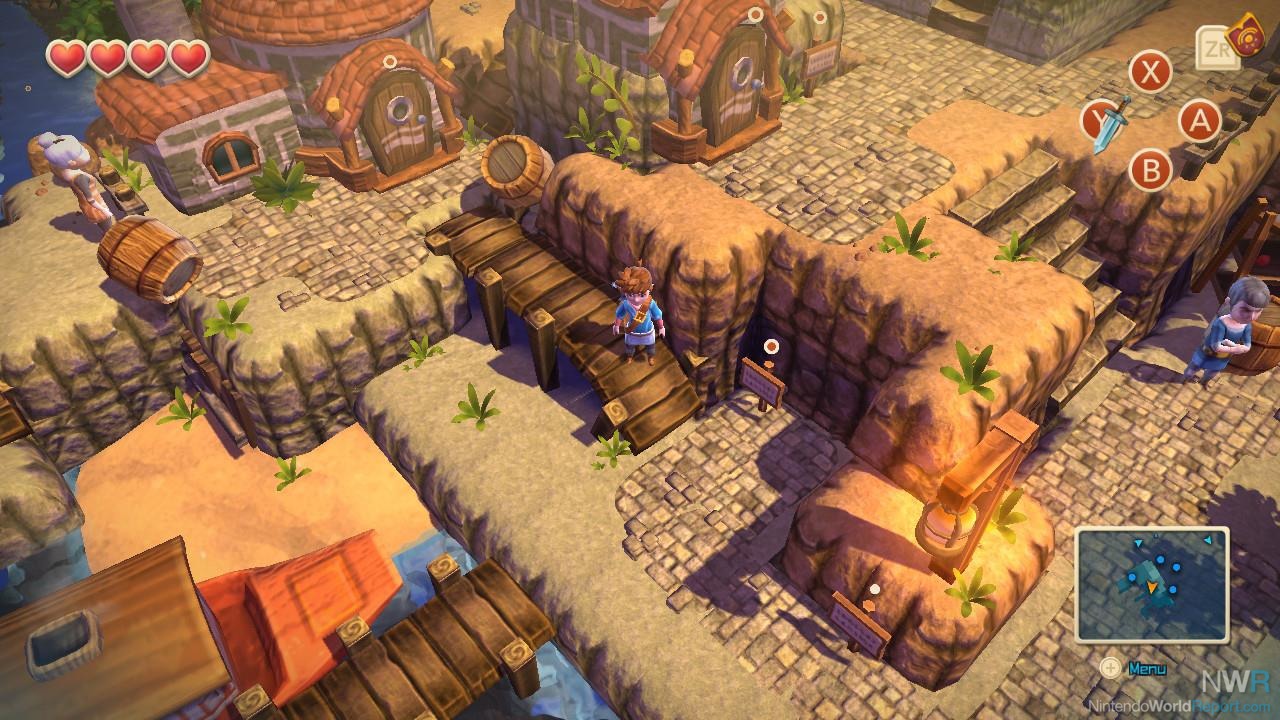 The game does have moments of obtuseness that added a few hours of boring gameplay. I spent an hour retreading an island looking for my next objective before again speaking to the only NPC on the island. It turns out his dialogue trailed off mid-thought and I was expected to guess that he had more to say. I was on the wrong island. After collecting the three McGuffins, the mysterious old man magically advised me to “stock up and prepare [my]self in every possible way” before confronting Oceanhorn. I was at 50% completion and hadn’t even discovered a handful of islands.

Oceanhorn: Monster of Uncharted Seas is solid, though, especially for anyone longing for a throwback 2D adventure game. The story isn’t terribly long, but there’s plenty to collect along the way, and the included DLC island adds just enough to push Oceanhorn to a very satisfying content level. Just remember that this is not Zelda and you’ll have a good time.

Thanks for the review. I'm on the fence about this one.

I have been interested in trying Oceanhorn for a long time, but didnt want to play it on a phone/tablet. I will get for Switch when I dont have so many other things to play

I feel like I need to finish Breath of the Wild first, so might pick this up in August.

I think releasing the week of the Summer Steam sale was a huge mistake.


I wanted a reason to use my Switch, but now that I know it's available $7.50 I probably won't buy it at all.