If you, and a group of your friends, enjoy smack talking and retro-style gaming over some drinks this could be a perfect game for you. Otherwise, you'll have to think it over a bit

Astro Duel Deluxe offers an unapologetically local-multiplayer-focused, heavily retro look-and-feel, gaming experience. From that simple description and some screen shots alone, you can probably determine if you’re interested in the title. It delivers precisely what it set out to, and quite well, but make no mistake about the fact that if you’re looking for more you will not find it here. 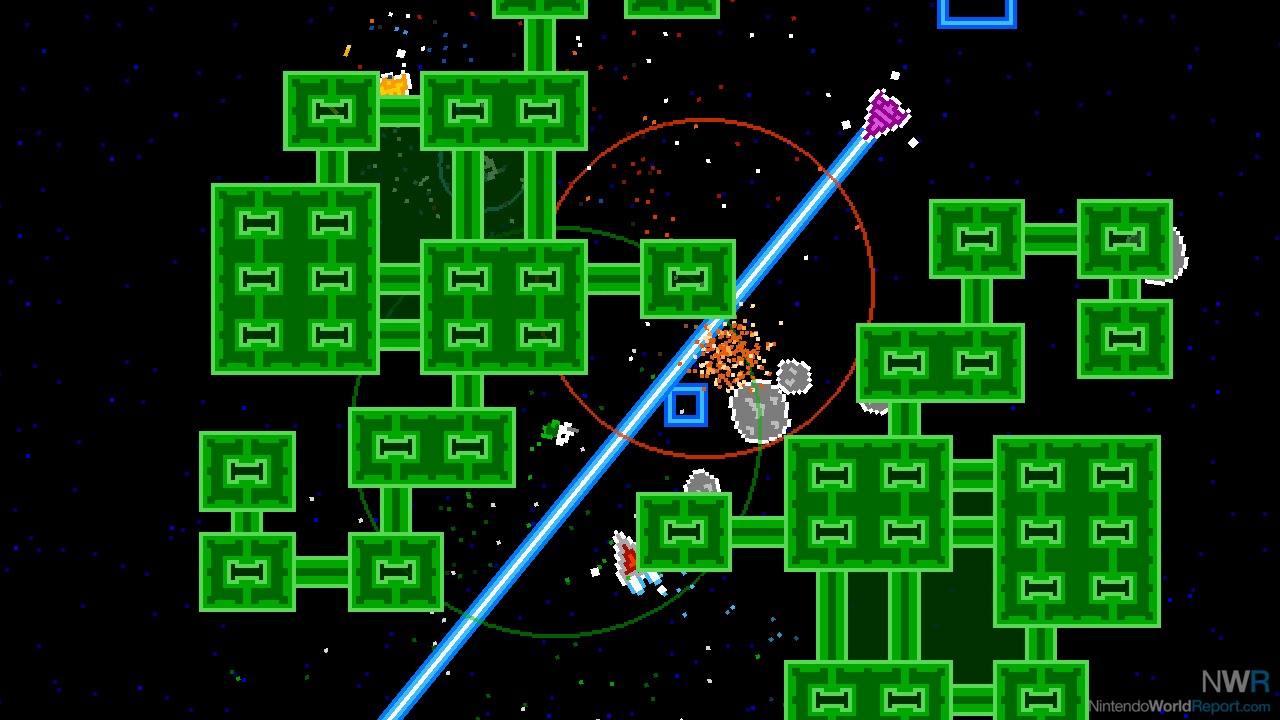 Assuming that most people interested in the game will at least have some grasp of classic gaming titles, I’d say Deluxe is a mix of Space Duel (oldest-school arcade), Asteroids (everything), and Scorched Earth (PC, and if you’re thinking Worms, it copied Scorched Earth’s gameplay!). You’ll be placed in an arena with a variety of walls, blocks that may be broken, gravity wells, and other various elements against up to 5 foes. There are a few variants to choose from, including team options, but I’d assume most of the time you’ll play the mode that focuses on killing the other players’ pilots since that is the most fun. Control options are also varied, with support for single or dual JoyCon, and Pro Controllers. There’s even a game mode that works via touch controls with each player getting their own corner of the screen to very simply control their ship! It is limited, but in a pinch it will still let you kill your friends, and isn’t that what life is all about?

In order to add some skill to the mix, you’ll only have 3 shots you can fire on your enemies before needing to pause to recharge. Fortunately, once your enemies’ pilots have been blown from their ship, you can opt to simply fly into them for the kill. You’ll want to do that quickly as well since, if they’re able to avoid death for a short time, a new ship will re-form around them. This creates a great, suspenseful dynamic that can sometimes turn things around for you even when it’s looking grim.

To spice things up further, there are a number of power-ups that can either help protect you a bit or do some serious damage. There’s nothing quite so satisfying as killing a few enemies at once with a missile or a proximity mine, just be sure not to be in the blast radius since those same explosions will get you if you’re not careful. One nice touch is that the game includes many options for configuration for power-ups and other settings. This will let you set the table for anything from a strategic battle with guns only to crazier configurations if people are so inclined.

Though single-player is possible with the inclusion of CPU bots, and they do provide a reasonable challenge, the somewhat-sterile exercise of fighting them fails to meet the game's true potential. Similarly, simply finding other people to play the game with you may not guarantee fun as the simplicity and style of the game won’t be for everyone. This is, sadly, where an online multiplayer option would have been welcome in one regard, but probably still not quite the same in another.

This game is meant to be played with a bunch of friends talking trash and taking each other out. If you find yourself in the company of like-minded friends on a semi-regular basis, this game could provide some great laughs and fun. I absolutely can see where, especially with a bit of liquid enhancement, it could make for a great party game. Unfortunately, if you’re generally only going to be able to play the game by yourself, or the people you can play with don’t roll retro, it is hard to give it a recommendation. Correctly scoring a game with such a laser-focus on a goal that it hits but that, by design, misses so much of the general audience is a challenge. I’ve tried my best to spell out its value proposition clearly and you’ll have to judge from there.