A blast (or Hadoken) from the past that’s still fun over 20 years after it’s original release.

Since Street Fighter II’s original release in 1991, Capcom has repeatedly returned to the iconic fighting game. Versions of the game have appeared on numerous video game systems from the 3DO to the Game Boy. Ultra Street Fighter II: The Final Challengers for the Nintendo Switch is the latest iteration and it’s still a great fighting game, but certain choices by the development team hold the game back from being the ultimate version of Street Fighter II. 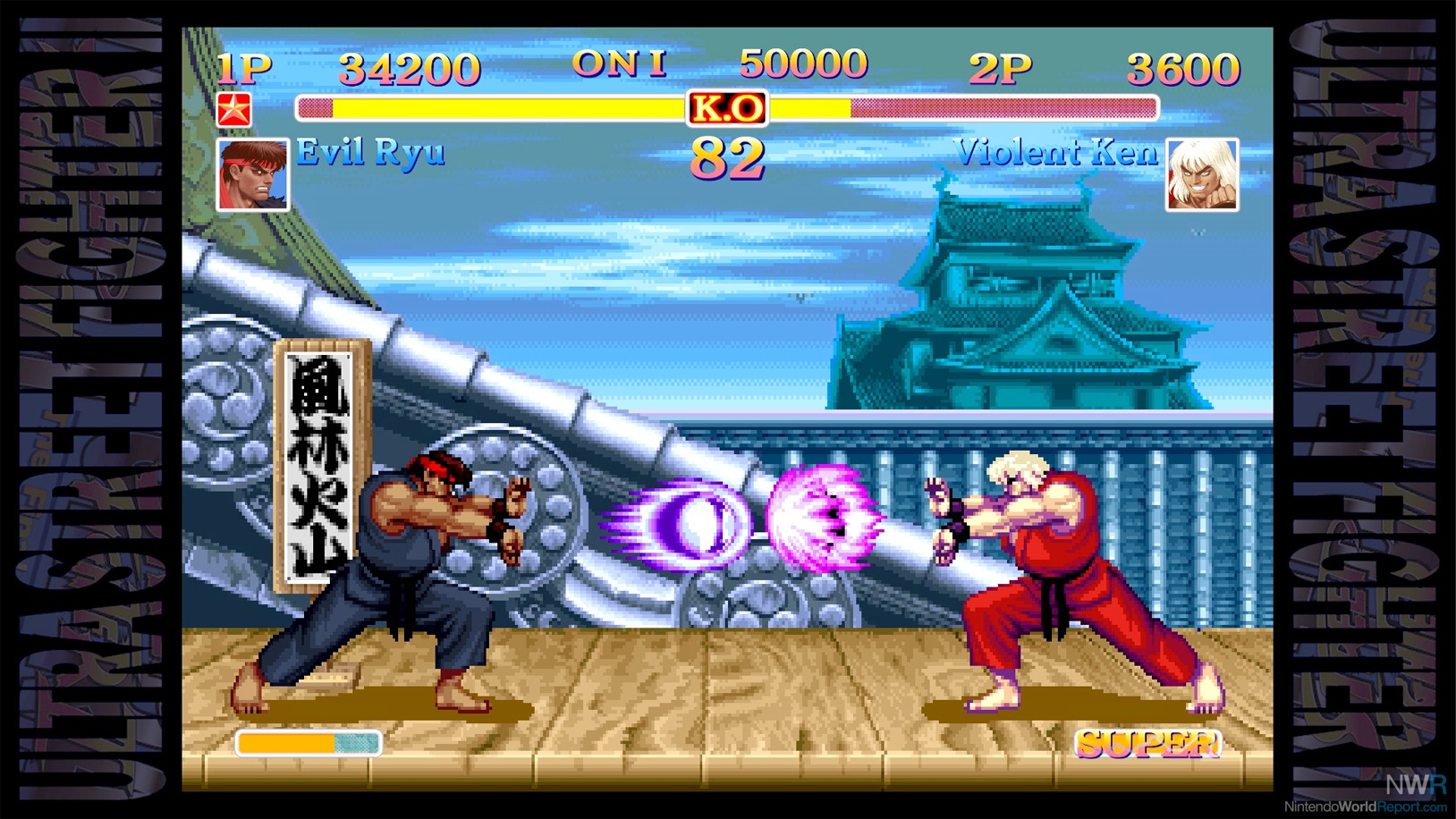 At it’s core, Ultra Street Fighter II: The Final Challengers is based on 1994’s Super Street Fighter II Turbo. That game introduced the powerful special attacks known as Super Combos along with the hidden character Akuma. On the Nintendo Switch, Akuma is immediately available on the character select screen and two other fighters join the roster, Violent Ken from SNK vs. Capcom: SVC Chaos, and Evil Ryu from the Street Fighter Alpha series. The game’s speed seems to be very close to the default one of Super Street Fighter II Turbo, but disappointingly there is no speed setting to adjust it (a common feature found in many previous iterations of Street Fighter II). In portable mode, players have the option to enable on-screen buttons that allow you to easily perform special attacks. A similar feature was found in Super Street Fighter IV: 3D Edition, and I welcome it's return because it's a great way to become familiar with a new fighter while also making some of the more difficult Super Combos a breeze to pull off.

Two visual styles are available: classic, which allows you to fight using the original sprites, and an option called “new style,” which lets you play the game using the redrawn HD sprites that the comic book company UDON Entertainment originally created for 2008’s Super Street Fighter II Turbo HD Remix. In addition, players can also choose between the classic music or a remastered soundtrack. When playing with the remastered soundtrack, the sound effects and character voices are changed to those from Street Fighter IV and you can’t mix and match old sound effects with new music or vice versa. Another negative is that you can’t remove the ugly side borders when playing with the classic visual style. You do have the ability to completely remove the game’s HUD though, which allows for some interesting matches where you’re completely unaware of how much health you and your opponent currently possess. One must back out to the main menu and go to the options menu if they wish to change visual or musical styles. Recent Switch release Wonder Boy: The Dragon’s Trap let you easily switch graphical styles in the middle of gameplay and it would have been nice if a similar feature was present in Ultra Street Fighter II.

The most unique new feature to the game is the first-person Way of the Hado mode. Players fight as Ryu against a slew of opponents using motion controls. This mode has a useful tutorial that shows you exactly how to hold a pair of Joy-Con to perform the different attacks. You can also then practice each move to make sure you are performing them correctly. I found the motion controls to be mostly responsive, and the mode overall to be a silly diversion. Nobody should buy this game for the Way of the Hado mode, but it's worth trying once or twice.

The menu system in the game appears to be based on the one found in Street Fighter IV. While this might be a small detail, I was always impressed by the clean visual style of Street Fighter IV’s menu system and it continues to function great in this game. Another neat feature is the ability to save match replays. One other mode worth talking about is the Buddy Battle mode where two players team up to fight a single opponent. This mode is pretty fun in co-op, but for some strange reason, all battles in this mode take place on M. Bison’s stage. It's especially weird when early screenshots of this mode showed Ryu’s stage as a possible arena. While the game feels pretty polished, strange quirks like this make one wonder if the game was rushed to market. It’s also worth noting that one cannot play as old versions of their characters with their original movesets (like they could in previous iterations of Street Fighter II).

Players can wirelessly connect to a nearby Switch and partake in a local multiplayer battle. In fact, certain single player modes allow you to leave your Switch constantly searching for a local battle. As someone who lives in New York City, I hope I’ll actually be able to encounter a random match on the subway or in some other venue. The game also features an online mode, which similar to the menu system, is patterned after the one found in Street Fighter IV. Players have the choice between ranked and casual matches and can also search for opponents based on their region and skill. Overall, the the netcode seems to be pretty strong when playing against opponents in nearby regions, but the matches I played against foes on the other side of the planet did have some noticeable lag. Those desiring classic Street Fighter II action online should be satisfied by the system Capcom has setup.

The game features seven levels of difficulty and it’s easy to start up the classic arcade mode or partake in a one-off versus match against the computer. If you’ve sunk a ton of time into Street Fighter II in the past, I can’t imagine the single-player mode will hold your attention for very long. One notable feature missing is the classic bonus stages where you destroy a car or a brick wall. While it’s true that Super Street Fighter II Turbo did omit these bonus stages, Capcom had previously added them back in on the Sega Dreamcast and you’d think a game featuring the Ultra moniker might do the same.

In 2017, Street Fighter II is still a very enjoyable fighting game. The Switch version plays great, but Capcom could have included more ways to customize the gameplay, visual, and audio settings. Street Fighter fans who have always wanted a way to play the game at any locale will love having the game on a super portable system like the Switch. As a single-player experience though, this version of Street Fighter leaves a lot to be desired and you might be better off downloading a NeoGeo fighter.

I think the price of the game should also factor into the decision to buy the game. I'm sorry, but it doesn't really seem like this game is worth the $40 ($43.20 after tax in my state) that Capcom is charging for the game. It seems more like a $20 game, especially if you aren't gonna play online a lot.

Agree with Mythtendo, need a half-off sale before I'd consider buying another copy at $20.


Another issue I have is lack of D-Pad on the joycon.  If anyone is looking to get this game, might be interested to know that these controllers have just patched in Nintendo Switch support, so you can play the game like you could the last time Street Fighter was on a Nintendo console.


It does suck not having a D-Pad on the JoyCons. I hope Nintendo releases a JoyCon variant with D-Pad sooner than later. Found the game controls pretty well with the D-Pad on the Pro Controller. May have to buy an 8bitdo controller especially if Virtual Console comes soon!