Some great ideas stuck in a middling game.

HAMSTER continues its flood of the Nintendo eShop with Neo Geo titles, throwing the retro enthused gamer a life jacket with a glut of classic games to choose from. Diving deep into the catalog, we take a look at the 1991 release, Alpha Mission II. This vertical-scrolling shoot-em-up doesn’t boost the gorgeous graphics Neo Geo was known for but offers some unique features that help differentiate itself from others in the genre. However, a convoluted power-up system and some bland level design hold it back from being a truly standout title.

While Alpha Mission II’s core mechanics are true to that of most shoot-em-up games, there are a few wrinkles that change up the pace a bit. For starters, you'll encounter two different tiers of enemies: ground units and air units. While firing, your ship automatically sends out two different types of attacks: missiles that take the low ground and lasers that fire at airborne enemies. The problem with this approach is that the missiles shoot at a painstakingly slow pace compared to your laser. As you would imagine, hitting the fire button at a fast rate increases the amount of lasers you’re able to fire off, but regardless, the missiles shoot at a static slow pace. This becomes frustrating when you have an overwhelming number of ground enemies to deal with and no real way to keep up with taking them down. This forces you to instead dodge projectiles to survive instead of blasting them to oblivion. Of course, there are ways to power up your ground missiles, but it doesn’t change the rate of fire and only releases a few more missiles with each attack. 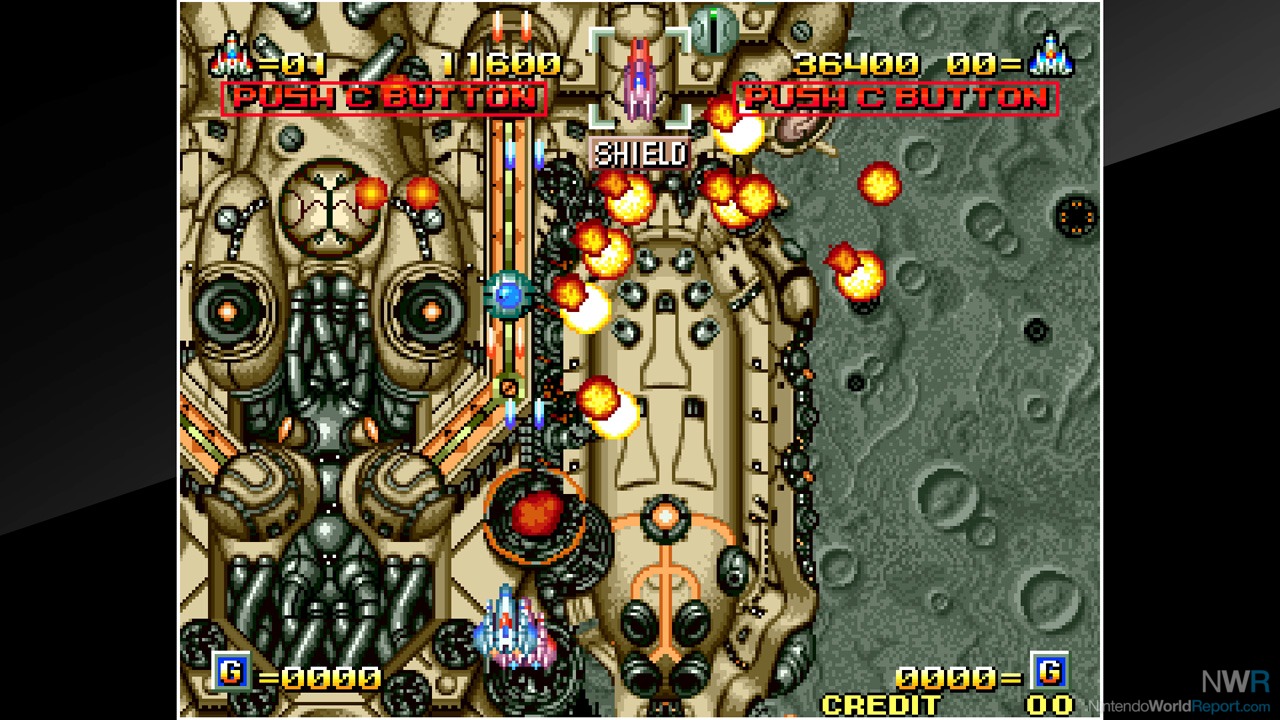 Speaking of the power-up system, boy is it confusing. There are a wide range of different power-ups you can pick up to help blast away enemies, but you’re likely to have no idea what each letter represents without digging into the digital manual and taking some notes. There are some obvious ones such a S, L and M which upgrade your speed, laser and missiles respectively, but then we’re introduced to things like K, W and R. Without checking the manual, you’d never know that those power-ups let you keep your powered-up ship when you die, warp your ship forward bypassing some of the level or the opposite: sending you backwards. Oh yeah, sometimes the letter is backwards indicating it’s actually a power-down. While it seems like I’m railing on the system, it works just fine, and once you familiarize yourself, it makes sense. It’s just that it can be daunting at first and can easily deter players who aren’t committed to seeing the game through.

Where Alpha Mission II really stands tall is in its Armor system. While blasting away enemies, you’ll occasionally be rewarded with parts of Armor that you’ll want to collect. Find three of the same Armor type and you’ll be able to activate it, making your ship incredibly powerful for a short period. When you activate your Armor, you’ll gain an energy bar that drains as you fire and will hemorrhage when taking damage, but you’ll come across energy power-ups that help refill the gauge. There are 11 different types of armor, each with its own unique ability, and even some have alternate abilities. There are some vanilla Armors such as Laser, which gives you a more powerful laser, and Shield, which protects you from damage. However, there are also some really spectacular Armor types such as Blackhole, which creates a black hole that pulls in air enemies and projectiles, as well as Phoenix, which transforms your ship into a Phoenix, destroying enemies on contact. Unfortunately, it’s difficult to find three of the same Armor parts out in the wild and grabbing a part of a different Armor set causes you to lose any you were holding onto. Luckily, after each stage is completed, you’ll be rewarded with gold you can use to purchase full Armor sets. I found that it was best to save your Armors for bosses because they deal out some serious damage and can help turn the tide on a tough battle. Using different Armor is insanely satisfying and really adds to the enjoyment of working your way through each stage hoping to piece together a full set. 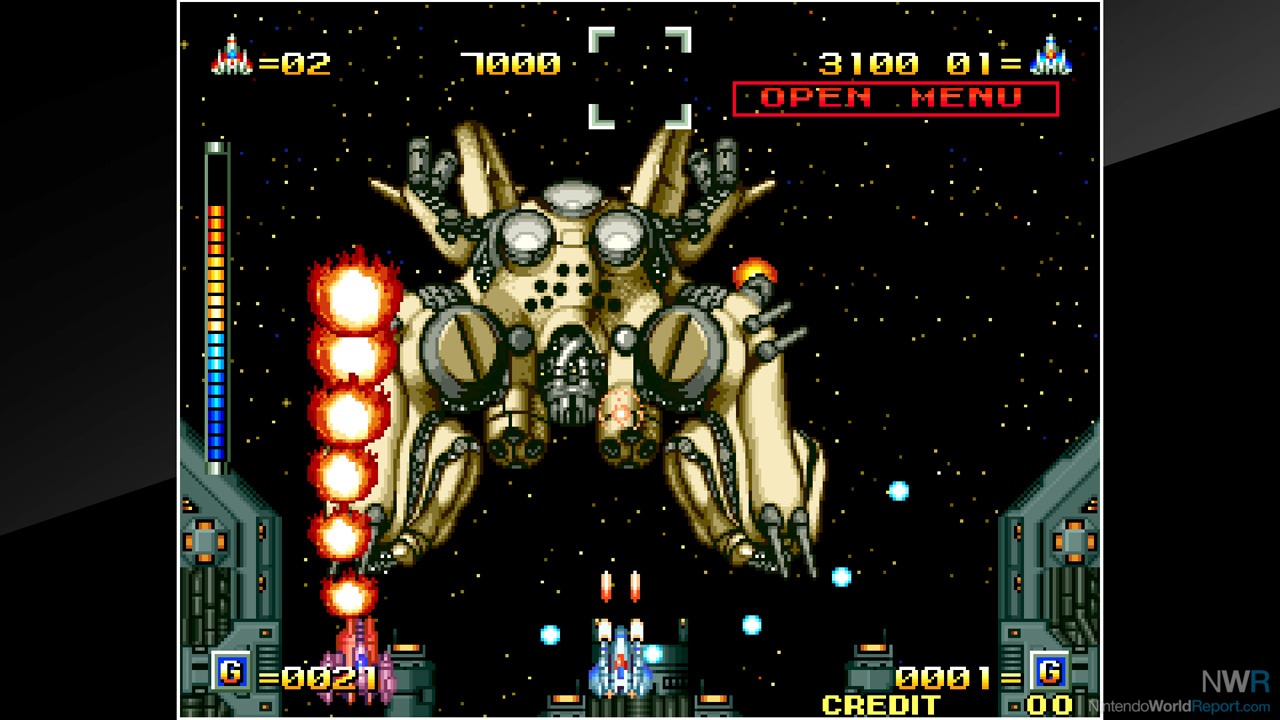 From a visual standpoint, Alpha Mission II fails to impress. Not to say the graphics are bad, but for being on a system with a reputation of visually stunning games, Alpha Mission II tends to feel bland. The blandness continues into the level design. Early on in your adventure you’ll be treated to a really novel and well designed level where your objective is to blast away pieces of a huge ship while avoiding an onslaught of projectiles. This culminates with you entering the ship to fight an intense boss battle and narrowly escaping before it blows up into smithereens. This set the bar rather high, but sadly the game never even comes close to that level of design afterwards, only serving up a number of stale missions. Fortunately, mini-boss and boss battles are a saving grace, offering up fun but very challenging fights all while providing a nice soundtrack to match. The game also offers co-op play, and it has never been easier; using a single joy con works as well as any other control option available.

Alpha Mission II is an interesting look back at gaming in the early 90s. It introduced some unique and interesting ideas while leaving other areas unpolished, resulting in a middling game. It’s hard to ignore how awesome the Armor system is, but it’s a shame that uninspired level design and some weird design decisions ultimately hold it back from being great. If you’re a fan of shoot-em-up games, you’ll likely be able to find enjoyment in here, but if you're a casual fan just looking to jump in and play, it might be best to think twice.