A wonderful game with a shaky foundation.

Chase McCain, badass cop, returns from his multi-year sabbatical in LEGO City Undercover after capturing the infamous Rex Fury and accidentally revealing the identity of a key witness. When the mayor of LEGO City asks him to return to help recapture an escaped Rex Fury, McCain find his arrests attributed to his rival, the new police chief, and his romantic interest, the aforementioned key witness, angry and in hiding. 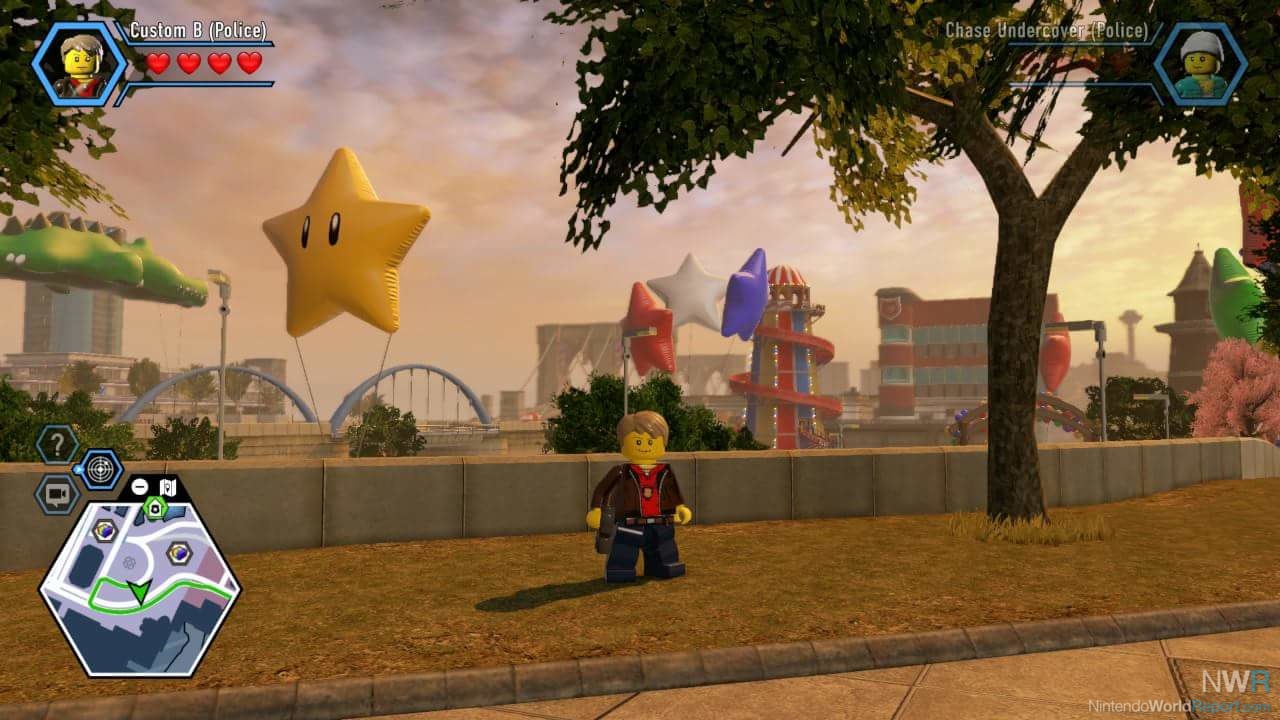 The story of this former Wii U exclusive, which is now available for Switch, clips through 15 locations pretty quickly, but I got lost exploring often. LEGO City, even four years after its debut, is impressively dense. Almost every city block hides a collectable, including cars, characters, and super bricks. Frustratingly, most collectibles are locked behind a disguise or ability. While the story isn’t terribly long, I hated plowing through it just to fully explore the city.

The traditional LEGO gameplay (and humor) compliments the old-school cop movie satire well. McCain goes undercover to infiltrate LEGO City's gangs, giving McCain access to eight different disguises, each with unique abilities. Players can cycle through disguises instantly with L and R, but after unlocking all eight, cycling becomes cumbersome. I would’ve liked for disguises to unlock new abilities instead of piling on new disguises.

Super bricks are almost required to complete super builds to progress the story. Early in the game, I spent a few hours grinding regular bricks and looking for super bricks to super build a boat to get to the third level. Without many story abilities, I had to break every LEGO tree, table, or bench I could find, and then touch each fallen brick. Driving on the sidewalk picks up a decent number of bricks, too, but too many objects in the world aren’t made of LEGO, damaging your car and ending your combo. I learned quickly to save as many bricks as possible and not waste them on non-story super builds. Super bricks are worth 1,000 or 10,000 bricks, while a palm tree is worth like three. 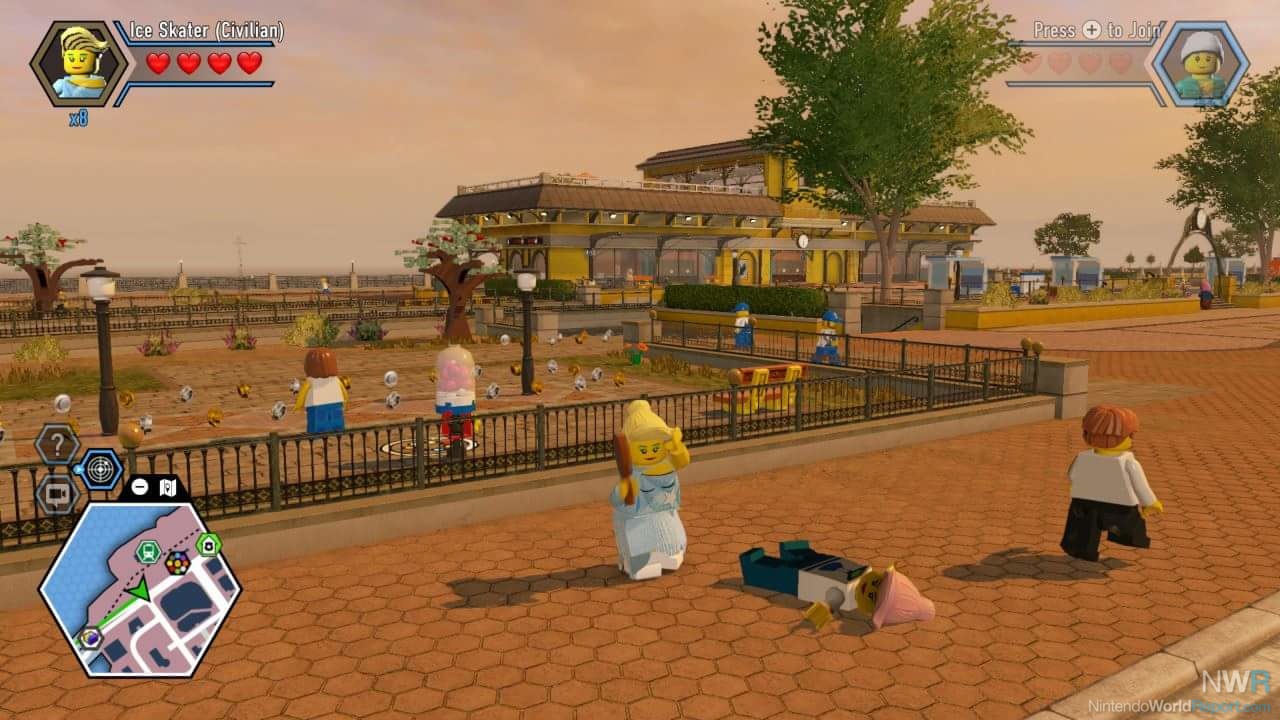 The levels will be familiar to LEGO fans. Each guides you through a handful of rooms with collectibles and crappy puzzles scattered throughout. Puzzles essentially require players to use a handful of abilities in succession. If McCain isn't wearing the correct disguise, he just shrugs at the camera instead of letting the player immediately switch. Again, cycling through the eight costumes is tiring, and McCain’s smug little shrug doesn’t help. The writing, however, is hysterical. Whether McCain is partnered with cops from a ‘70s TV show or waist-deep undercover in a (pretty offensive) Chinese gang, almost every joke lands. I am 12 at heart, so your mileage may vary.

New in this release is a two-player co-op mode. This game shouldn't have ever been released without it. Players can do their own things in opposite sides of the massive city or work together to plow through story mode. Some of my favorite moments were seeing cars drive by that were obviously attacked by my co-op pal and slyly hunting and running him down in my own car. The game does chug a bit with two players, but the added fun is worth it.

While I enjoyed the game enough to power through some major technical and gameplay flaws, others may not. “The software closed unexpectedly” three times and softlocked in menus twice. (Two of the crashes couldn't deter me from booting immediately back into the fun, while the other forced me to notice the sun rising.) Sound effects didn't always load. Big effects like water jets or explosions dropped the framerate noticeably. I was surprised to suddenly feel the Switch's HD Rumble kick in for 20 minutes after hours of playing, then disappear forever. An early cut scene plain didn’t have a voice track, and most cut scenes had jaggy, inconsistent shading. 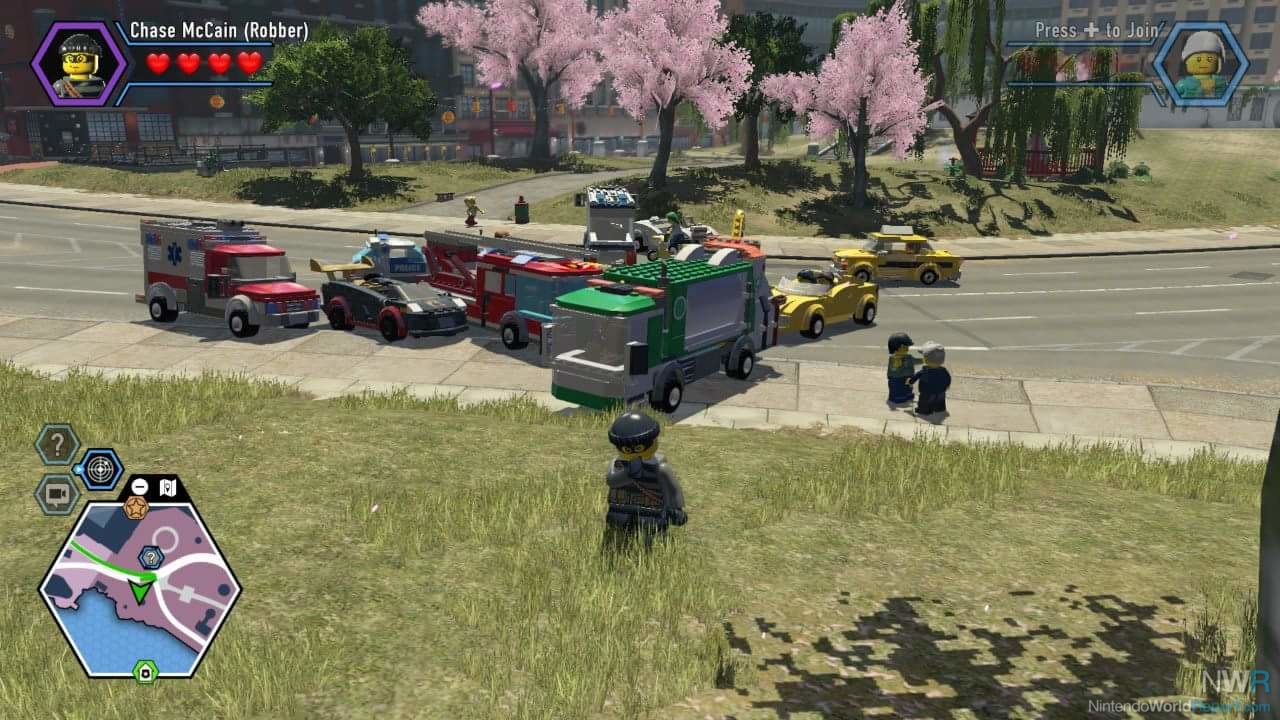 Platforming is imprecise, and too many challenges are timed platforming sections. Combat is an almost non-existent time waster. Pressing attack downs an enemy. You must quickly handcuff downed enemies or else they get back up. Later enemies land on their feet when thrown and must be thrown using a different button. Dying seems to have no consequences. Literally the only point of combat is to have the player randomly press buttons until the enemies all disappear. The player can only face his or her own mortality while thinking about the precious moments of life stolen by this game's combat system.

I couldn't even figure out which movie the combat tutorial was parodying.

But even with these shortcomings, the world shone through. I still find myself screwing around in LEGO City long after finishing the story (and long after my bedtime). The fully-loaded open world hides so many secrets just around every corner. The puzzles are painfully obvious after unlocking every disguise, but the sheer number of collectibles makes this a necessity; it's much more satisfying to bounce quickly between simple puzzles than to bang my head against a hard one. I may play through each story level once more with the full suite of abilities unlocked, but the real appeal here is getting lost in what feels like a square mile of LEGO sets.

While the initial load time is quite significant, there is no loading between sections of the massive city. Unless the player enters one of LEGO City Undercover's 15 levels or the character creator/plot device that is the police station, there aren't any load times. In the Switch version, the load screen displays an original joke and a small LEGO model that can be spun around. The Switch also features a Sleep Mode, so the initial game load (easily the worst offender) can be circumvented.

From the hundreds of trinkets to the passersby's stupid comments, LEGO City has me smitten. I’ve finished the story and gathered a handful of collectibles, but LEGO City Undercover will stay in my Switch for a good long while.

The sound issue seems to be tied to going in and out of sleep mode, and restarting the game seemed to fix it for me.


Definitely glad I grabbed it as the co-op has been great. It does slow-down when you are both doing different things, but seems to stay between 25-30 fps. It never distracted us from enjoying the game.

Can anyone clarify why the box for the game says "Internet Required"? Why would this game require Internet?

Can anyone clarify why the box for the game says "Internet Required"? Why would this game require Internet?

That was a misprint on the box art. The game does not require a connection at all.