F-Zero fans will feel at home with this fast paced, visually stunning racer.

Nintendo fans have been clamoring for a new installment in the dormant F-Zero franchise for years to no avail, but luckily Shin'en Multimedia is scratching the itch with their latest release, Fast RMX. An enhanced port of the 2015 sleeper hit Fast Neo Racing, RMX offers 30 stunning race tracks, 15 vehicles and a plethora of modes, all while providing jaw dropping visuals. Not only that, but with tight controls, incredible framerate and fun mechanics it is a must-play for fans of the genre. 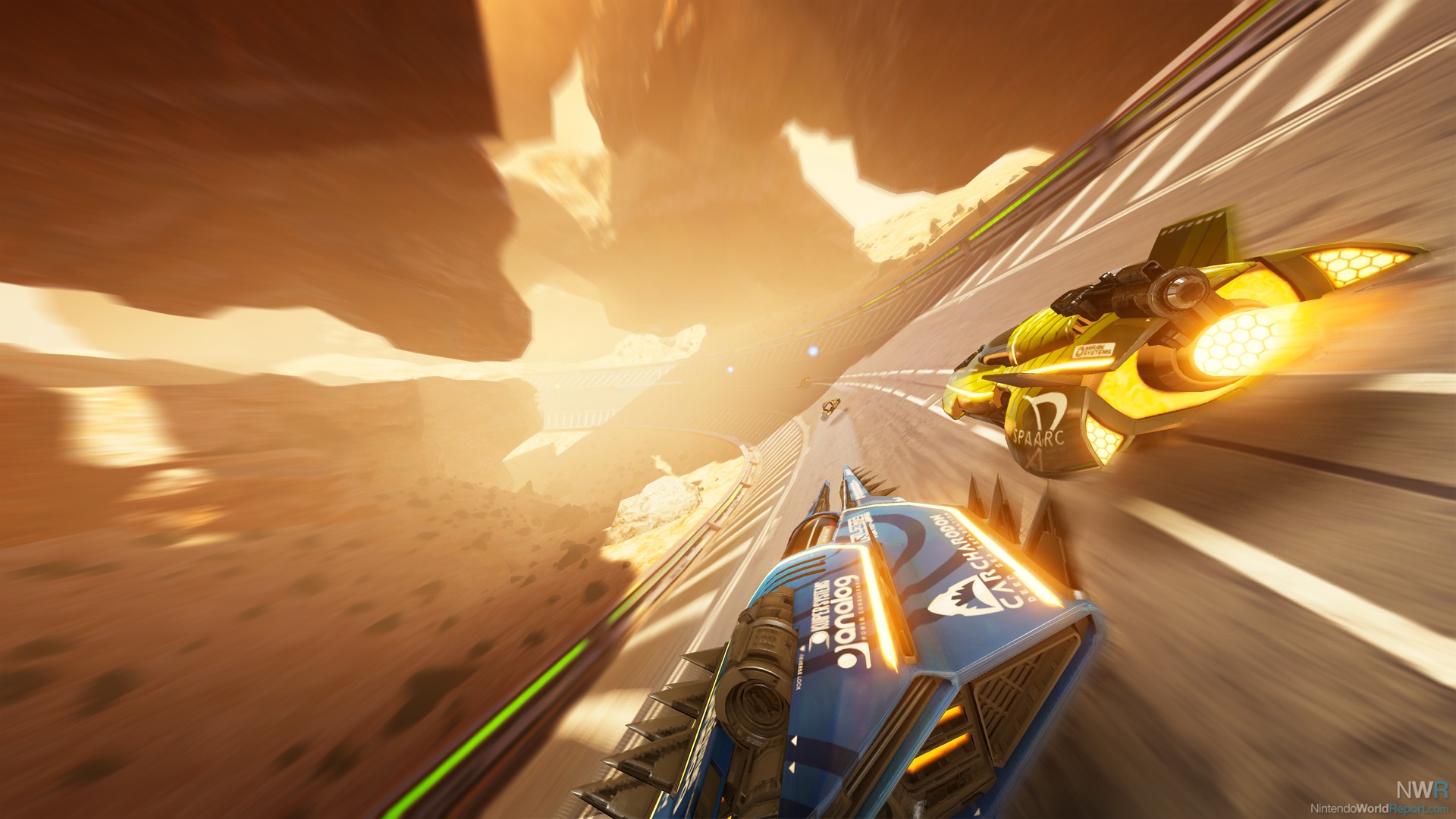 Like many futuristic racing games, you’ll be speeding around tracks at lightning speeds while managing your boosts and trying not to crash or go flying into oblivion. However, what Fast RMX offers that is unique are blue and orange colored boost pads which require you to switch and match accordingly. With a quick press of a button, your ship's exhaust and lights will change color. Running over the matching boost pad will grant you a huge boost, but having the wrong color will do the opposite, thus reducing your speed greatly. This takes some getting used to, but nothing feels as satisfying as nailing a series of quick changing boost pads to propel you into first, especially in the more difficult settings where mastering this mechanic is vital.

Upon booting up Fast RMX for the first time, you’ll have Championship and Multiplayer modes available to you. Championship mode, with 10 cups consisting of three tracks each, allows you to earn points depending on your position. Placing in each cup will reward you with more cups and vehicles and eventually unlock advanced and expert difficulty. In addition, by completing each cup, those three tracks will unlock in Hero Mode, an homage to the F-Zero series. In Hero Mode, your boost gauge now doubles as your shield, often tempting the player to choose between using the extra boost or the having the comfort of a full shield. This choice becomes even more important when you consider that one crash results in a forfeit and restart of the race.

Fast RMX offers a few ways to play with friends including splitscreen for up to four players, Local play connecting up to eight Switches and Online play for up to eight players. Splitscreen allows you to set up single races, cups, adjust difficulty and even change the number of laps per race. On the other hand, online play is much more limited. In it, you will select your vehicle and be dropped into a game where you can pick one of six random levels to vote on. I never experienced a problem connecting to a game and it always ran smoothly for me, although at times opposing racers were a bit laggy. There were also a few instances in which I would be in first, only to discover that I placed second after crossing the finish line. However, I found the online experience to be solid for the most part aside from the omission of online friend play. It was announced that this feature would be added in a future undated patch alongside Time Trail mode, but it’s inexcusable not to have this feature at launch. 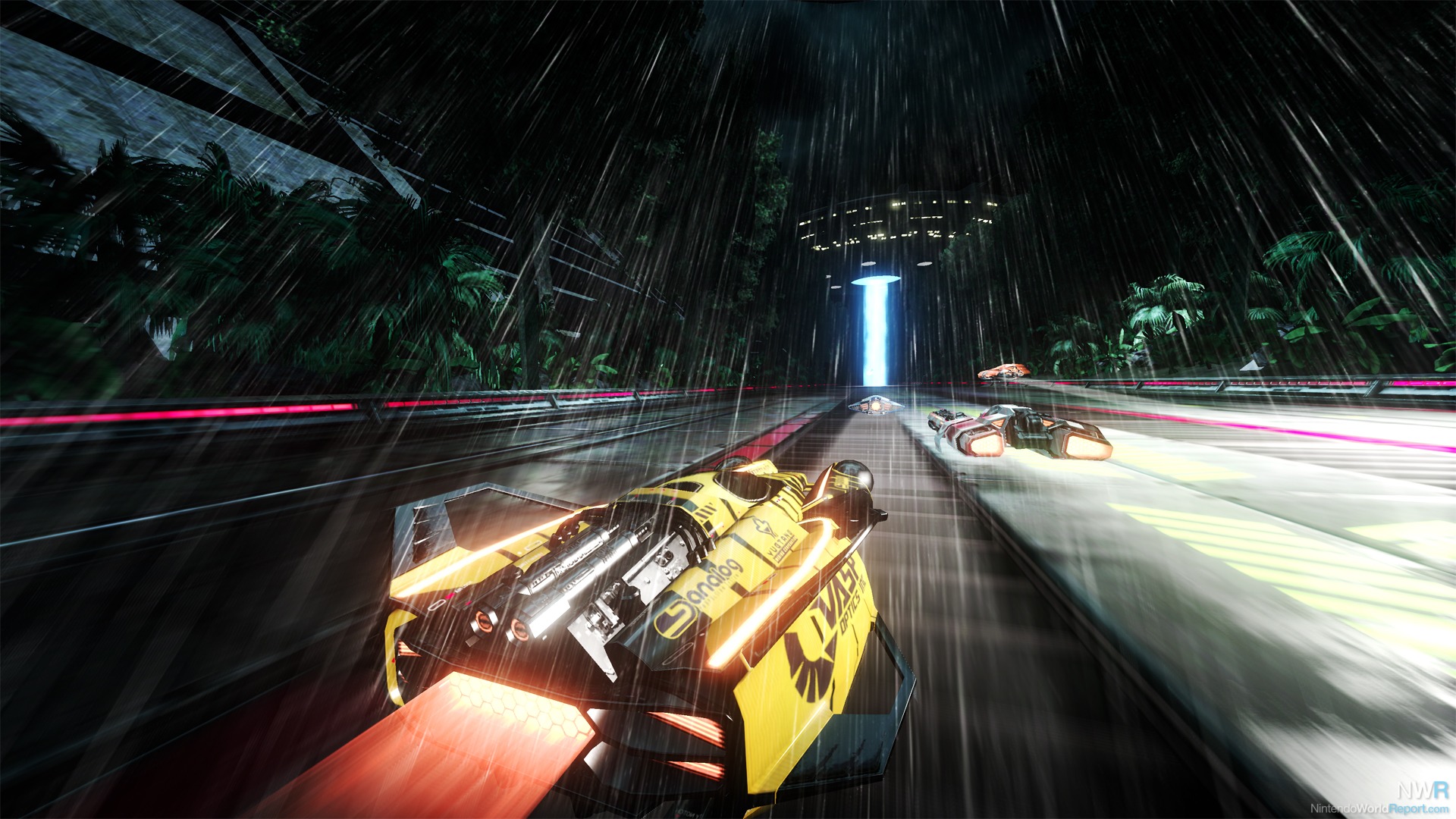 As you race through the 30 tracks, you’ll be treated to breathtaking sceneries that add different elements to deal with. Certain stages have giant turbines that attempt to blow you off the course, while others have debris flying onto the track, forcing you to avoid them at all costs. Yet, nothing looks quite as intense as a storm impairing your vision with rain splashing across your dash. The addition of HD Rumble only enhances these elements as you feel your vehicle being pushed around by a sandstorm or the bump from an opposing racer. The game runs at 60fps in both docked and handheld mode and never has any problem with slowdown, making it a perfect showcase for what the Switch can do. The game offers an abundance of controller options and settings including motion controls, while even letting you remap the controller to your personal liking.

Fast RMX does tremendous job of capturing the feeling of blazing around the race track. The combination of visuals, audio and technical prowess makes for an incredibly sound and fun game. The lack of online options at launch is disappointing, but still doesn’t detract from the overall experience. With Fast RMX, Shin'en Multimedia has managed to deliver a triple A experience for a third of the price.

Yeah the game offers I think every possible controller configuration. I figured single joycon would be rough, but for a race or two at a time actually works pretty well. A good way to let someone test it out while you're on the go!

I'm really happy with how much more forgiving this version is over the original. One (or three) crashes doesn't mean you're pretty much out of the race.