Back to Bed (Wii U) Review

Puzzles look great, but are a snooze to solve.

Bob is a narcoleptic sleepwalker who finds himself aimlessly walking forward in a haphazardous dream world. Luckily for him you take control of Subob, a strange four legged creature of Bob’s subconscious, to guide him safely back to his bed. Originally released on mobile and PC in 2014 with a PSN release in 2015, Bedtime Digital Games has finally brought Back to Bed to the eShop for Nintendo puzzle fans to consume. They manage to create a beautiful and visually interesting world, but ultimately the puzzles fail to live up to the high standards set by the presentation. 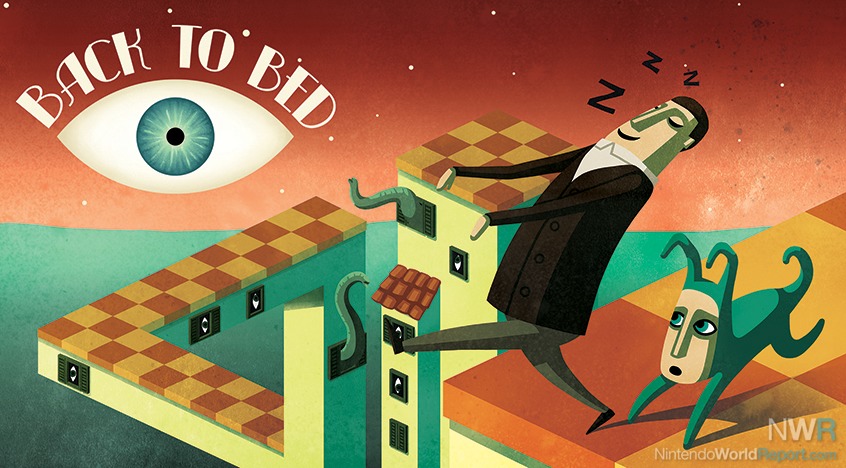 The ground rules for Bob are that he walks straight until he either falls off the edge or walks into an object, in which case he’ll turn clockwise and continue forward. Given this knowledge you’ll be tasked to return Bob safely back to his bed over the course of thirty puzzles. While there are some permanent objects in the field of play you’ll have to worry about, the main focus will be picking up and moving apples in Bob’s path to divert him from certain death. As you progress through early stages new elements will be thrown into the mix such as movable bridges, enemies you must avoid and some perspective bending tricks. Even with the added elements most of the puzzles fail to challenge the player and can be solved with relative ease. That’s not to say they don’t offer some clever ideas that present fun solutions, I just never felt any struggle to finish a puzzle. Completing the first fifteen stages will unlock Nightmare mode which features the same fifteen puzzles, but this time around you must collect keys before navigating Bob back to his bedroom. While this adds a wrinkle to each puzzle, it hardly lives up to its namesake and offers little added difficulty.

Where Back to Bed really shines is the visual and audio presentation. Inspired by MC Escher and Salvador Dali, puzzles bend perspective to create interesting isometric layouts and create new depth for solving puzzles. Unfortunately this novel idea is used sparingly and the game never fully commits to it, which could have made for some unique solutions. Bedtime Digital Games does a great job of making each puzzle feel like it’s a dream. The music invokes both the feeling of being in a whimsical dream, but also the uneasiness of being stuck in a nightmare. Seeing real world objects in different forms only adds to immersion of being in this bizarre dream.

Back to Bed offers a great look into the fascinating world of Bob’s dreams, but sadly you’ll only be there for about two hours. The Wii U version doesn’t include any added content or features, but does support off screen play. While the game stands tall from a presentation aspect, where it lacks most is in the act of playing it. Puzzles offer some clever ideas, but they never truly explore how far each idea could be pushed which results in a simple game that never challenges the player. This might appeal to a casual puzzle fan, but it certainly won’t scratch the itch for veterans of the genre.