A fun party game that brings Pictionary-style fun to Wii U with tons of options.

You know when you have a bunch of people over and you need a game for all of them to play? One that's also simple enough for everyone to understand and play instantly? Bear Box Media's Scribble could be the Wii U eShop game to help you out. It's a pictionary-like game that features five game modes, more than 1,500 words, and a unique feature called "Mutators." Although awkward stumbles crop up along the way, Scribble proves to be a successful party game that is fun for all ages. 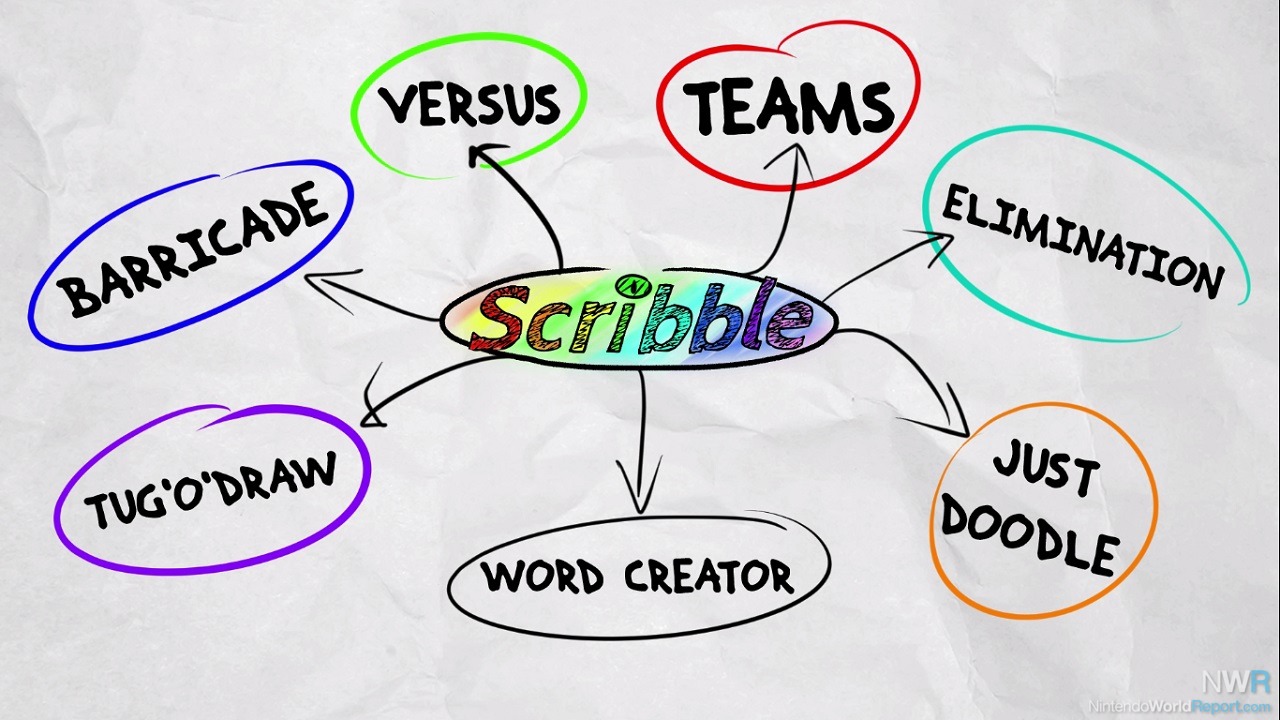 The Versus Mode is your standard pictionary game. In this mode, you can have up to eight different players and set up your game in many customizable ways. When you draw your sketches. you have the option to use different colors and three different pen thicknesses, which are nice to have to aid you while you draw.

Fortunately, if you are playing with a youngster, you can enable an Easy Mode for their turn. This will make simple words appear for them to draw. Even when playing with adults only, I turned the Easy Mode on for all of the players and the game turned into a fast-paced frenzy. Other customizable options include how long each player gets at drawing (ranging from 15 Seconds to 3 Minutes), how many turns (or rounds) each player gets, and finally the options to enable Custom Words and/or Mutators.

There are some little annoyances while playing Scribble that can cause some frustration. For one, after someone has guessed the correct answer and you have selected their name on the GamePad, there is a five-second delay before your next word appears, all while your precious drawing time is dwindling. This might not seem like a lot on paper, but when you are determined to win as many points as you can, that five seconds can seem like a long time. You can give yourself more time with the customizable options, but the problem still persists. This is not a deal breaker by any means, but it stuck out during my game sessions. Another issue that came up is the word library. There are over 1,500 words, but they range from "Frog" to "Psychiatrist" to "Mud Running." Guessing words may be easier for others, but I did frequently hear "I don't even know what this word is." A good solution to this problem is either using Easy Mode or making your own words with the Custom Words feature. 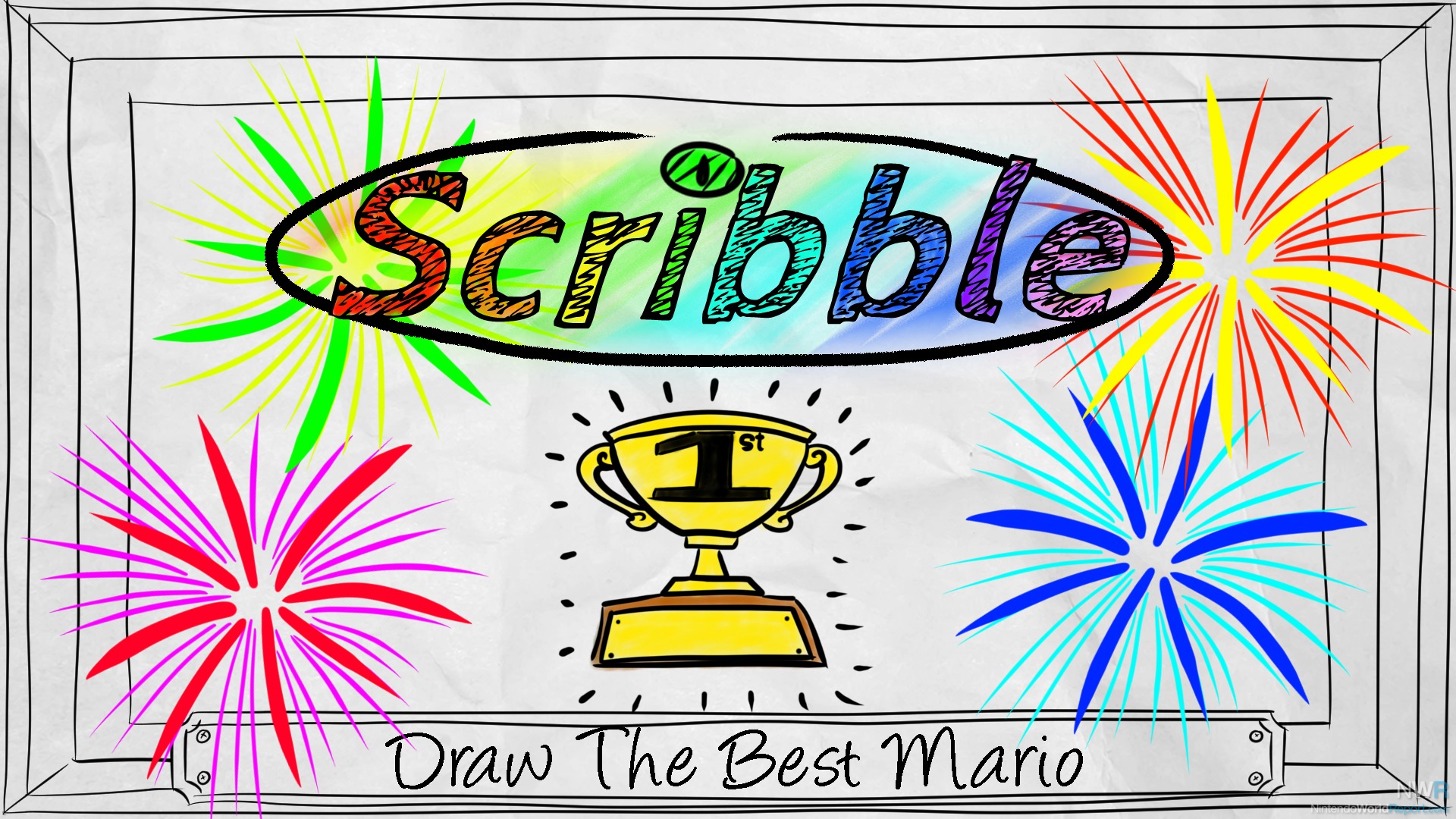 You can add Custom Words directly from the menu in the Word Creator. It's as simple as it sounds, any word up to 13 characters using letters and numbers. This gives you the ability to add silly words like "Propane" or "Uncle Frank" to the mix, and let you really mold the game to the company you have. Custom Words ends up being a practical feature that is very easy to implement.

More fun twists to the mix are the Mutators. These are little distractions (five in total) that you can add to any game mode. "Blackout" puts a big ink blot only on the GamePad's screen, making it hard to draw without looking at the television's screen. Another Mutator called "Flip" really throws the sketch artist off by making them draw backwards. This is definitely a fun little mechanic. There really is something magical when you watch someone concentrate extremely hard on drawing words that turn out to be "cake" or "triangle". The other Mutators are also a blast, and can really switch things up after playing a certain mode one way for some time. 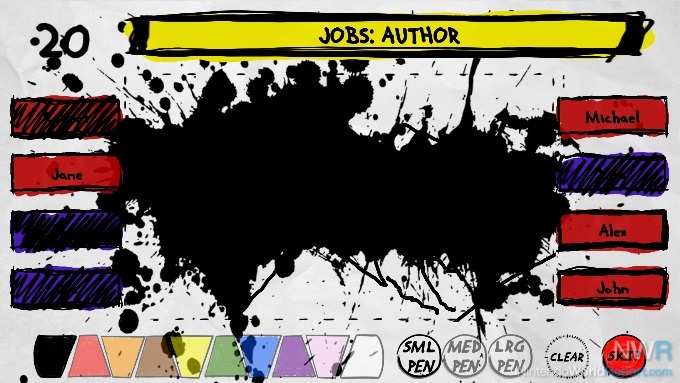 The other main game modes offer some fun variations to the normal Versus game. You can also play with Teams, giving you the chance to pit one side of the room against the other. The Tug 'O' Draw mode lets you play on Teams, but with a twist: both sides can guess for points. Barricade is a Mode that pits one team against the other on the top and bottom of a checkered screen. You win by making your way to the other team’s goal line by getting correct guesses with your team. The Elimination Mode makes things simple, if no one guesses your word you are out of the game. The last mode is called Just Doodle. This is a great feature in Scribble that lets you make your own rules by not having any timer or point system. If you want to just sit there with your friends and draw funny things on the TV, this is the mode for you. This could also be great for playing with young children by letting them go at their own pace.

Overall, Scribble hits all of the marks of a solid multiplayer party game. It knows what it wants to do and executes well on it. So if you have a bunch people over and want a simple game for an enjoyable time, consider downloading Scribble. Anyone can play it, and everyone will enjoy it.