Provides an excellent reminder of why these licensed brawlers died.

One of the first games I ever reviewed, back on a now-defunct website, was The Incredibles for GBA. It had two things going against it: it’s a licensed game and it’s a repetitive sidescrolling brawler. Put those two together—as many licensed sidescrolling brawlers did in the 90’s and early aughts—and you’ve almost always got a bad game. These things died for a reason. So you can imagine my utter shock when Cartoon Network: Battle Crashers lurched into the same graveyard. This is a game you should avoid.

Now that’s a tough thing to say, given the franchises on display here. We’ve got The Amazing World of Gumball, Adventure Time, Regular Show, Steven Universe, Uncle Grandpa, and Clarence but—and this is the first big red flag—there is no spoken dialogue. The opening cutscene, in which Uncle Grandpa plows through several dimensions in his van, has nothing but music. Nobody spent any money on voice acting with these characters, which seems like a crime.

You’ll have all six party members (Clarence, Fin & Jake, Gumball, Mordecai & Rigby, Steven and Uncle Grandpa) within the first couple levels and all of them are utterly useless for dispatching enemies except for Finn & Jake. Enemies, of which there are woefully few types, are damage sponges and every encounter takes about three times as long as it needs to. You can switch between characters with the L & R buttons, and at the end of each stage everyone will gain experience. Leveling up increases stats (barely) and eventually unlocks alternate attacks, so that’s something.

But it’s not much. Every stage comes down to repetitiously beating up enemies (and getting poisoned a lot) and collecting gems. I’m not even sure what the gems do. Each level has two stages and a boss fight. The game would be over very quickly if not for one incredibly ballsy move on the part of developer GameMill Entertainment: you are often forced to replay previous stages in their entirety.

Battle Crashers puts you through this shit routinely. GameMill thought this would be a great way to pad the playtime. It is not; they were wrong.

So we’ve got a repetitious brawler where really only one character duo is useful, there is no voice acting to speak of, and the game is constantly giving you the finger with backtracking. At least it looks great, right? Nope, sorry kids, it looks terrible. The PS4 and Xbox One versions look okay, what with the crisp graphics and whatnot, but on 3DS it looks muddy and washed out. But this can’t be the 3DS’ problem alone—I have lots of good looking 3DS games—it’s just a shoddy port. There’s even slowdown. You'll notice I'm not including screenshots, because screenshots would be a lie.

You might have some fun playing the PS4 and Xbox One versions with your friends for some couch co-op. I mean, that’s really what brawlers are for, and a lot of the problems melt away when you add more players. That luxury does not exist on 3DS. You’re all in this together, but by yourself, so enjoy that.

What more can I say? It’s been awhile since I reviewed something so awful. Don’t play this or buy it for your kids. The only outcome will be sadness. 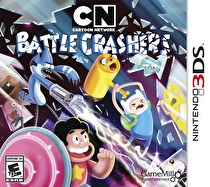