I created a librarian Skylander who shoots a bow and farts when she walks.

When Skylanders debuted in 2011, it was a smashing success as a Nintendo exclusive on Wii and 3DS. Over the years, Nintendo consoles have slipped in sales and now, in 2016, as the Wii U is nearing its end and other systems from Sony and Microsoft rule the roost, the Skylanders series is getting the short end of the stick on Nintendo platforms. Skylanders Imaginators does a fine job of bringing about a novel new concept to the series with the addition of a robust character creator, but it looks muddy and runs poorly on Wii U. Imaginators is the first Skylanders game to ever truly disappoint me. 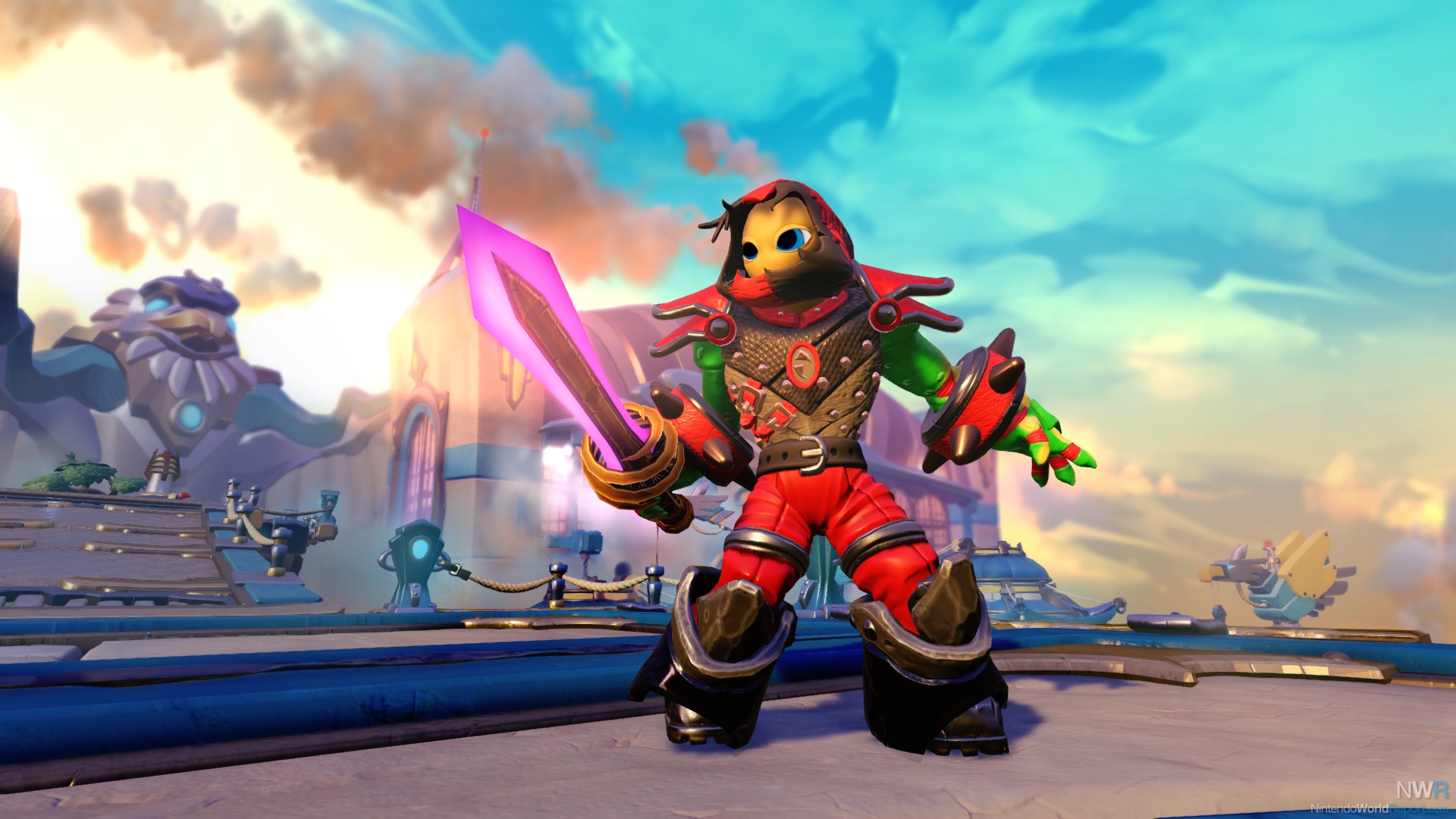 A bulk of the issues are technical ones - load times are abundant, graphical hitches occur often - but even the structure of the adventure seems like a step down from last year’s superb SuperChargers. The adventure seems more staid and routine than the more epic and dynamic proceedings in last year’s entry. Delightfully goofy stuff still happens, as for example, you totally fight a giant guacamole monster, but overall, the experience is far more guided than the more organic flow of some past games.

The story is a brisk 10-level affair, bolstered by the 10 Sensei Realm levels that are only unlocked if you have a Sensei (the token new figure type) of each element. Three other levels are hidden behind additional figures, including the Crash Bandicoot level that is currently exclusive to the PS4 version but will be coming to all platforms later in the year. The fun Diablo-lite action is still a grand old romp, but the manic fun of earlier games seems to be a little subdued here. All of that energy appears to have shifted into the character creation aspect, which is the saving grace of Imaginators. 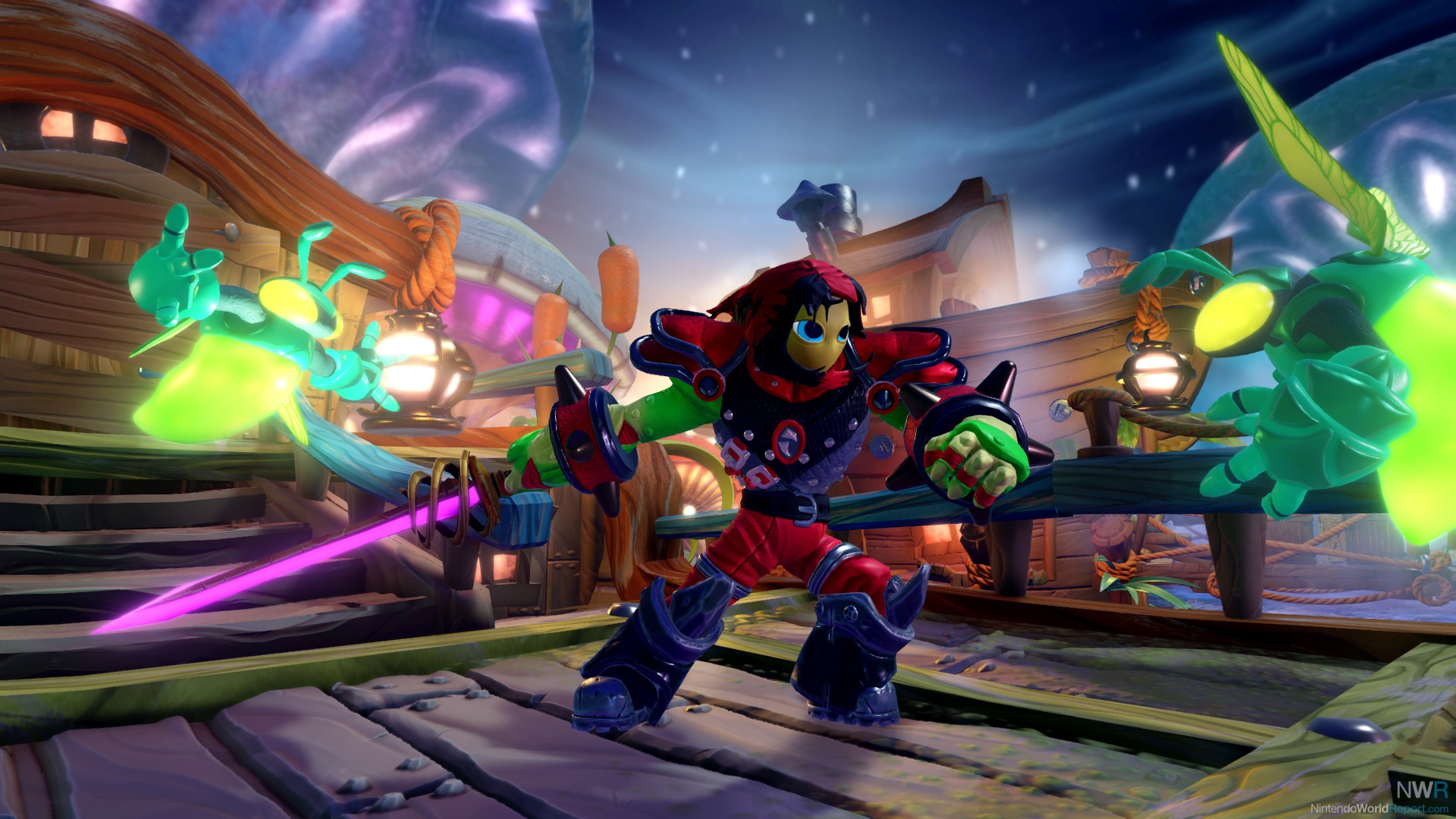 Using the new Creation Crystal figures, you can make your own Skylander using a deep set of customization options. Making characters is a joyous, hysterical experience, as the charm and levity of the series is nestled into every element of the creation tool. You can pick out all sorts of body parts, fine-tune their powers, pick out a catchphrase and a voice, and even add theme music. It’s a character creator that basically takes all of the best parts of creator tools over the years and puts them all into one. I generally don’t care much for in-depth character creation, but I loved making Skylanders here. Unfortunately, the creator often runs slow, hampering the neat experience.

Like the past Skylanders games, every previous figure works with Imaginators. While the new Sensei Skylanders and Creation Crystals take center stage, you can rock your Spyro from the original 2011 adventure in the latest game. You can even bring back the Skylander/Amiibo combination Bowser and Donkey Kong figures if you so choose. SuperChargers cars can be used in a racing mode that contains all of the levels from last year’s games. The racing mode seems straight-up lifted from the previous game, but it was fun in SuperChargers and is still fun here. The online multiplayer returns here as well.

Having played demos of the PlayStation 4 version of Imaginators, it seems like that version will run fine. Unfortunately, that’s not the case for the Wii U version. The recurring hitches and long load times combined with the subpar graphics make this entry a poor one for Nintendo fans. The core is fine, with wonderful character creation and the same classic Skylanders gameplay that have made this series superb, but it’s rough around the edges. If you’re a Wii U owner who owns a PS4 or an Xbox One, maybe take a peek at those versions this time around. All of your figures will still work on them (except for Bowser and DK). It’s sad to see the Nintendo version of Skylanders potentially be the weakest one, but that also seems to be a reflection of where the Wii U is in the gaming landscape in late 2016.

Superchargers from last year looked muddy on Wii U last year, compared to the fresher and more polished looking Trap Team that I played on Playstation 4.


Looks like running into the same issues that Wii had around Skylanders Giants - technically the same game, but doesn't look as polished and doesn't play as fluidly.


Disappointing that the storytelling may be a little flat.  I don't mind a brisk game, but the Saturday morning cartoon fun the other games had is pretty important in absence of a substantive game.

This review is missing a pretty major decision in the game.

But........... folks have already discovered you can use the 3DS version of Spyro's Adventure (the first Skylanders game) - it detects the crystal as a corrupt toy and will factory reset it, wiping the Battle Class selection.

I am very much interested in the PS4 version of this with Crash. It'll be a November purchase at the earliest, though, since I really want to pick up Dragon Quest Builders and Mario Party: Star Rush!

You can go back and edit the chatracter, but you cannot change the Battle Class.  This means, if you want to try out all 10 Battle Classes in all 10 Elements, you need 100 Creation Crystals (~$1,000).

I can understand the different elements thing, but locking you into a class also does seem low. I hope that they don't find a way to patch out that exploit you mentioned.

While nothing surprises me, I'm not sure there's a way to patch it out.  It would require either patching the 3DS version, which I'm not sure could be done and updates for it could easily be ignored (it has no online features to lock you out of for not updating) or patching Imaginators in such a way that it would recognize the Creation Crystal has been completely wiped - but then what?  Give an error message that the crystal no longer works?  That would end so badly...