Never odd or even if I had a hi-fi

With so many independent titles focused on 2D, 8-bit art styles, I was attracted to Noitu Love: Devolution because it was more focused on my wheelhouse of the 16-bit era. I knew vaguely that it was an action game, but I certainly didn’t expect this much reliance on the touch screen. Noitu Love is a fun arcade experience, but it unfortunately took some of the bad parts of that experience with it for the ride. 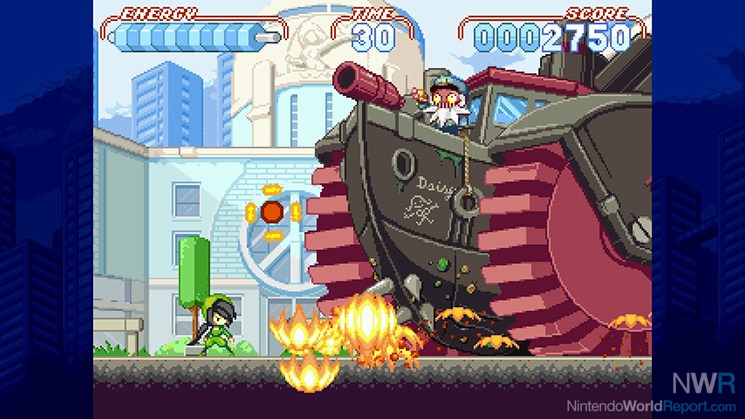 The titular character of Noitu Love isn’t initially playable – instead, the game stars a young member of a peackeeeping corps named Xoda Rap. Xoda is tasked with saving her futuristic city from a horde of evil robots known as Darns. As part of the story, the Darns appear to be running the city through every time period possible. In one three-level span, Xoda jumps from Victorian England to feudal-era Japan to the Old West, though with way more shooting and power armor. It’s a wild ride, but aside from some easily skipped exposition the focus is on smashing and blowing up robots. Keep an eye out for some of the neat effects in the background, though.

The combat uses either the touch screen or button taps for most of the moves, but locking onto enemies and rapid firing is all touch screen. The button options are all focused on the D-pad and ZL buttons on the Wii U (assuming the GamePad, the only other control option is Wii Remote + Nunchuck) which may present a problem for left-handed players. An option to use ZR and the face buttons as a separate-button D-pad may help with this down the line, but it’s not in the shipping product. The touch screen is also used for shielding with a quick scratch back and forth, but it’s hard to keep Xoda in the shield’s range and do damage to larger foes. I also noticed that the front of my right (stylus) hand’s ring finger was extremely sensitive after a bit of time. It’s not the biggest irritation I had after a game, but it’s noticeable.

A lot of in-game reasons push you to replay Noitu Love, which is good considering the first playthrough takes less than two hours. You can replay to focus on nailing combos that build as long as enemies are eliminated without touching the ground, aim for ranks, or simply complete levels as quickly as possible. For those who can adjust to the controls, this can take some time. However, what will stymie progress are a number of the bosses. A few took several minutes to figure out how to damage, and what I understand to be the final boss is a three-stage one with no apparent healing. The third stage of the fight doesn’t even have a visible life bar, which every other boss in the game does. If those challenges can be overcome, you can unlock other characters as well.

Noitu Love is a hard game to describe, but if I had to explain it to someone who had a background in games I’d call it “Gunstar Heroes with controls inspired by Kid Icarus Uprising.” Noitu Love seems like it could easily fit on the Sega Genesis if someone retrofitted a touch screen into the controller. A great game is nestled inside of this package, but some of the quality of life deficits that may have been acceptable in the Genesis days are a bit of a sore spot now. Still, there’s not a lot like it on Wii U so it’s worth taking for a spin.

A Wii U copy of the game was supplied for this review by Nintendo of America.