Blast ‘Em Bunnies, from developer Nnooo, is a disastrous attempt at a budget-priced mob shooter. From questionable DLC decisions to its flat, uninteresting gameplay, the entire package falls well short of being remembered for anything positive. And while its world may seem bright, colorful, and inviting, the mechanics underneath that coat of paint are anything but. 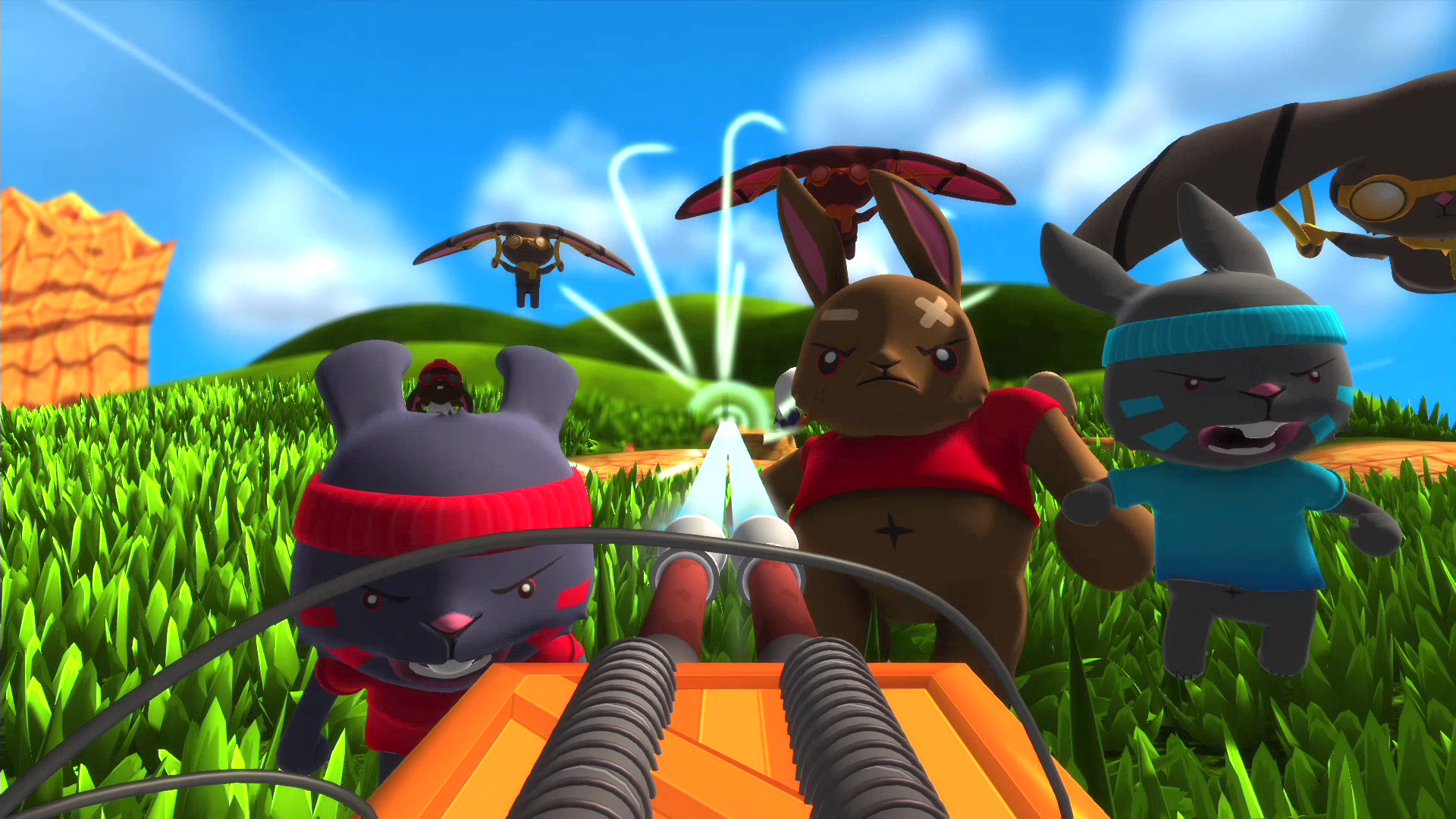 Upon starting the game, the player is immediately thrown in a tutorial that spells out the game’s plot (if you can really even call it that). The nameless main character, a bunny with an orange shirt, informs you that he’s been having a problem recently with other bunnies infringing on his turf, or in this case, his burrow. Luckily, like any sensible home-owning hare, he’s come prepared by equipping his home with a large, customizable turret that is capable of firing all kinds of fruit and vegetables at oncoming opponents. The tutorial suddenly begins, and you’re off… well, as the title implies, blasting bunnies. The minimalistic storytelling approach kind-of-sort-of works here, but there is never any reason given as to why these other bunnies want to gang up on you to take your home, or why your burrow in particular is so special. These details could have helped to provide a little more depth to a world that seems bland and, often, lifeless.

Speaking of the game’s lifeless atmosphere, the code that we were given didn’t have access to the plethora of downloadable content that will be available for the game. Extra arenas and character skins will be available (for an additional cost) that, while ultimately just aesthetic, could have provided some much-needed variety to the look of the arena and characters. This is where the game’s most egregious offense lies; there is only one arena in the core version of the game, which means that if the player ever wants to see something other than the stale environment from the tutorial, they’re going to have to shell out some extra cash. And believe me, the look of the first (and only) arena gets pretty old after a handful of rounds. Charging for this extra DLC seems like a quick cash-in; the kind that regularly appears in the worst of free-to-play mobile titles. The core game, then, feels incomplete without the DLC add-ons, which is disappointing to say the least. And don’t even get me started on the soundtrack. It’s just the same track that plays over and over again, no matter what is on your screen. 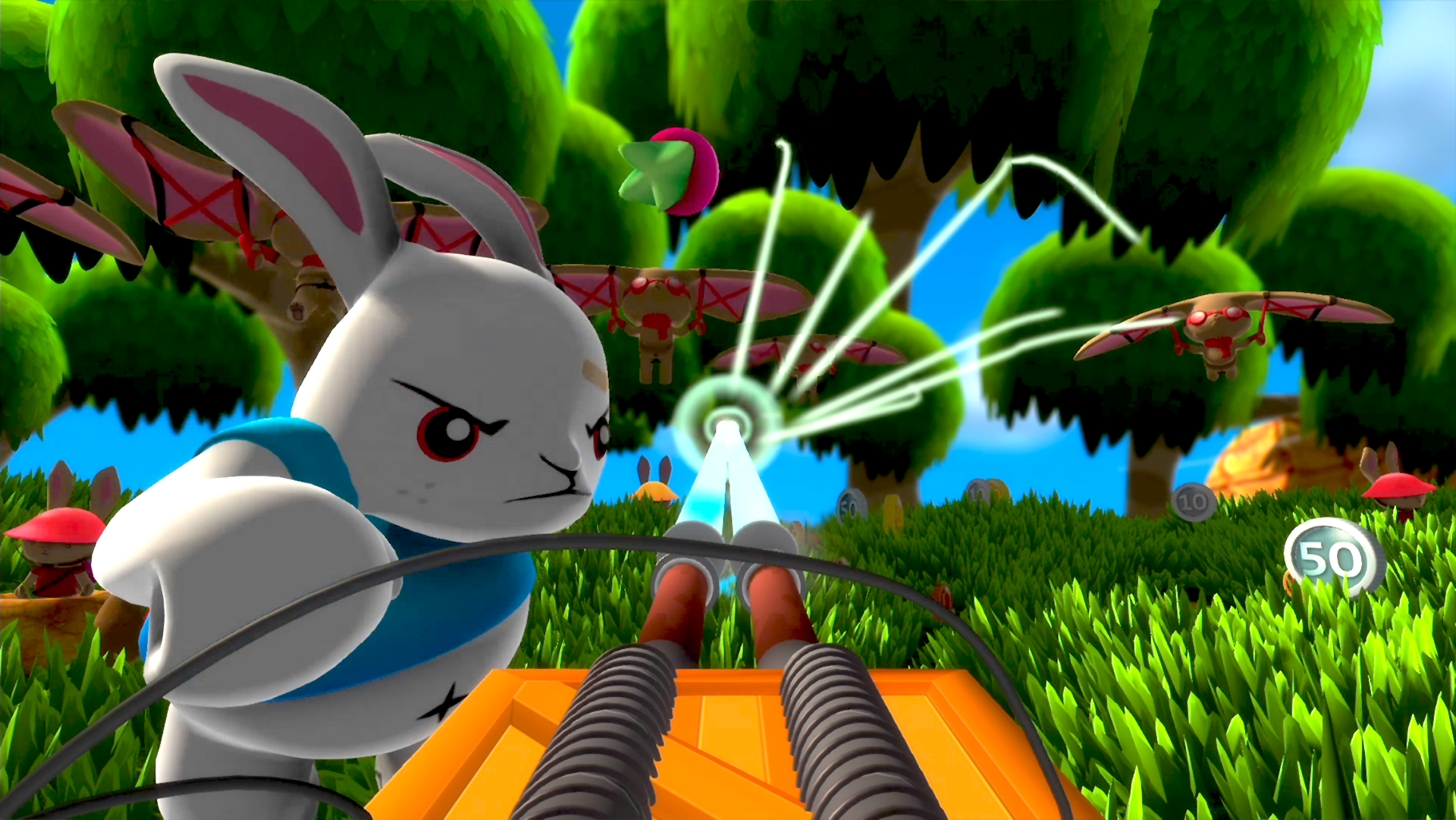 The thing is, the developers could easily have coaxed players into purchasing the unnecessary DLC if the gameplay had at least been worthwhile. But again, Blast ‘Em Bunnies seems content to provide the most minimalistic experience possible in its most crucial area. Each level sees the player jumping behind the vegetable turret to combat an endless horde of rabbits. Your burrow stands in the middle of the arena, and foes approach you from all sides, requiring you to either rotate your view using the 3DS’ slider pad, or to use the gyroscopic motion controls to look around. If you’re going to choose one, I highly recommend the former, because not only does twisting around with the 3DS make you look ridiculous, it makes a difficult experience that much less enjoyable. However you choose to control your gun, you’ll initially be shooting just carrots from the barrels, until you either obtain a power up mid-level from a defeated foe, or purchase a different weapon from the in-game shop using the coins dropped by enemies. The problem with these “upgrades” is that none of them really feel like they change the gameplay that much, or do any more or less damage to the mobs. Other than the occasional appearance of “Frenzy Mode,” in which you temporarily become invincible and your damage seemingly gets a boost, I found that the upgrades were generally just a cosmetic change.

There are two different modes to play: Survival, in which you try to last as long as possible against the endless hordes of rabbits, and Slaughter, in which you are given two minutes to destroy as many cute, cuddly bunnies as possible. Neither mode has much depth, and even the missions (which are repetitive tasks given to you in each stage that are always just of the “kill x many of y enemies” variety) are dull and pointless.

It’s hard to recommend this game to anyone at all. It repeatedly offers an unfriendly, boring experience to the player, and is the rare 3DS eShop title that makes its budget price seem too high for what you’re getting in return. Whether it’s the ridiculous DLC situation, the lifeless world and characters, or the monotonous gameplay, Blast ‘Em Bunnies comes with a very hearty warning to stay away from this reviewer.