Fighting games are few and far between on the Nintendo 3DS. Sure, there’s Smash Brothers, and if you go all the way back to the 3DS’ launch you can also mention Street Fighter IV 3D. But recently there hasn’t been much in the way of a fun fighting game. Dragon Ball Z: Extreme Butoden fills that gap the 3DS has had for a good while, but it’s only competent at best and nothing more. While the fighting system captures the exciting battles you’d see on the television program, the boring, repetitive story modes and a lack of roster depth can make this entry somewhat disappointing.

The gameplay is pretty simple. It’s a combo oriented fighter, so depending on the character you’ll be memorizing combos for each and string them together to preform Rush Combos. It’s a bit of button mashing, but there is depth here and most of the fighters I played as felt different and had their own combos and moves. You can either team up with two other Z fighters to form a team, or you can rely on 4 assist characters. While there’s only about 20 fighters to play as, including the usual suspects such as Goku, Krillin, Vegeta, Piccolo and various others, there’s a ton of assist characters, ranging from Master Roshi, Tien and Yamcha to minor characters like Launch and Turtle. While it’s nice that just about every major Z fighter is playable, I wish it was a bit more diverse. While you can use lesser fighters such as Tien and Yamcha as assist characters, I wish some of them were bumped up to regular fighter status since battles can get pretty repetitive.

This becomes more apparent as I got into the different gameplay modes. You immediately start out in Z Story mode, as it’s required you clear the “Dragon Team” mode before other modes can unlock. It’s a retelling of each major DBZ story arc, starting from the arrival of Goku’s sinister brother Raditz to the defeat of Kid Buu. It’s an extremely abridged version of the 296 episodes of Dragon Ball Z, but it’s a fine refresher for those who don’t remember the full story.

Once you clear that mode, the game gives you other Z Stories to clear under “What if” scenarios. This sounds cool on paper, but the execution is pretty weak. For example, I thought it would be cool if Vegeta was the one who beat Goku in their initial battle at the start of the series. So I played his mode and beat Goku, but then the story goes on to say that Gohan, who originally was cleared from the battlefield by Goku, came back under ape form and defeated Vegeta anyway. Most of the stories told in these scenarios are pretty much the same exact thing - there’s slight differences in the DBZ storyline based on who you play as, but it’s almost always the same story and nothing really ever deviates from that. It comes off as uncreative and uninteresting as there could have been some cool scenarios if they really went all out with this mode, but unfortunately they did not.

Adventure mode is the other big mode, but I found myself finding the same problems I had with Z Story, just to a lesser extent. It seems like a unique story on the surface, but it kind of isn’t. The story starts off with Omega Shenron using minus energy to bring back every enemy Goku has ever come across, including major foes like Frieza and Cell. He now has to find the Ultimate Dragon Balls, which will fix everything and restore them back to the way things were. This is a story that sounds fine on paper, but in execution it’s a bit of a bore. You’ll go through various cities, coming across familiar characters and familiar storylines - you battle Frieza in Namek, the Cell Games are back, you fight Vegeta and Trunks and Gohan eleven million times, and so on and so forth. I wouldn’t mind having to fight the same characters over and over if there were a more interesting premise, but with the familiar settings and storylines a lot of Adventure mode was just kind of boring. It was fun getting to interact with the more minor characters at the least, and this is the bulk of the game where you can use your skills to unlock more assist fighters. It’s not as bad as I’m making it out to be, as I did have fun at times thanks to the fighting system. I just found myself skipping the storyline screens as they weren’t really all that interesting.

Dragon Ball Z: Extreme Butoden isn’t bad. The core mechanics of the fighting system are fun, and they are the best representation of actual DBZ fights in 2D. I just wish that the modes the game provided were a bit more interesting in terms of storytelling. The retelling of the Dragon Ball Z story is a given in almost every game. But I wish the alternate story provided in Adventure Mode, as well as the “What if” scenarios in Z Story were a bit more varied and interesting. Problem is, with only so many characters to choose from, the experiences to be had in those modes are limiting. DBZ: Extreme Butoden has good intentions, and overall is a polished fighting game. I just wish the execution was a bit better.

I'm really enjoying this, as someone who doesn't have much fandom to the source material. We've definitely been spoiled by rosters like the 3D Dragon Ball Z games, but at the same time, sprites are a lot harder to do, and I really like what's on display here.


My favorite mode so far is Adventure mode. Going for S ranks on each mission to unlock zenny and new assist characters is quite addicting, and I get so excited when I unlock a new assist because I feel I earned it with skill.


I'm hoping we get online play over on this side of the Pacific like our Japanese friends will be getting. 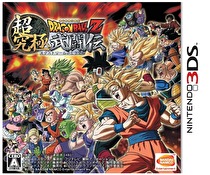