What time is it? Point-and-click Adventure Time!

I’ve always wanted the Adventure Time video games to be good. The universe that the Cartoon Network show creates is one of the most interesting places to explore, and previous attempts at capturing that feeling have been middling at best. Vicious Cycle Software attempts to buck the trend by focusing less on action with a basic point-and-click adventure-style game. Does this make the game “*click click*”, or just a bunch of dirtballs?

The game starts out with Finn and Jake, our two main heroes, uncovering an old, broken ticker-type machine that used to belong to their parents. Due to some meddling by Magic Man, one of the show’s many antagonists, the machine starts to work again, and starts spitting out various crimes and mysteries going on throughout the Land of Ooo. Finn and Jake decide to follow in their parents’ footsteps and take on the cases one by one.

Already, the premise fits right in line with how an episode of the show would play out, especially since all the original voice actors are present, including comedian Emo Philips who reprises his role as Cuber, the “grayble” storyteller, who sets up the game, and provides the game’s various tutorials. Rather than a traditional, two-dimensional animation style, the game opts for fully 3D polygonal graphics, which unfortunately aren’t as appealing. The textures are muddy and colors are dull, which is surprising considering how colorful and vibrant the show can be. And while the animations of the characters are fluid, their interaction with objects and lip-syncing leave a lot to be desired. Characters will just flap their mouths open and closed without matching any of the game’s dialogue, and specific actions tend to be acted out via mime, rather than actually using the important objects as intended.

As mentioned, the gameplay is your average point-and-click adventure game; you wander around an area picking up and examining objects, talking with various characters and using said objects with other objects and characters. The solution to solving the game’s various puzzles and cases range from extremely easy (i.e., gather objects and bring them elsewhere), to extremely obtuse if you’ve never seen the show. For example, there’s a point where you have to go out to Princess Bubblegum’s balcony to blow a human-sized bubble, so you can lift yourself up to a secret area. The game doesn’t do a good job of telling you to progress this way, you would’ve already had to have been familiar with one of the episodes to figure that out, without taking the time to examine every single object and interactable area. 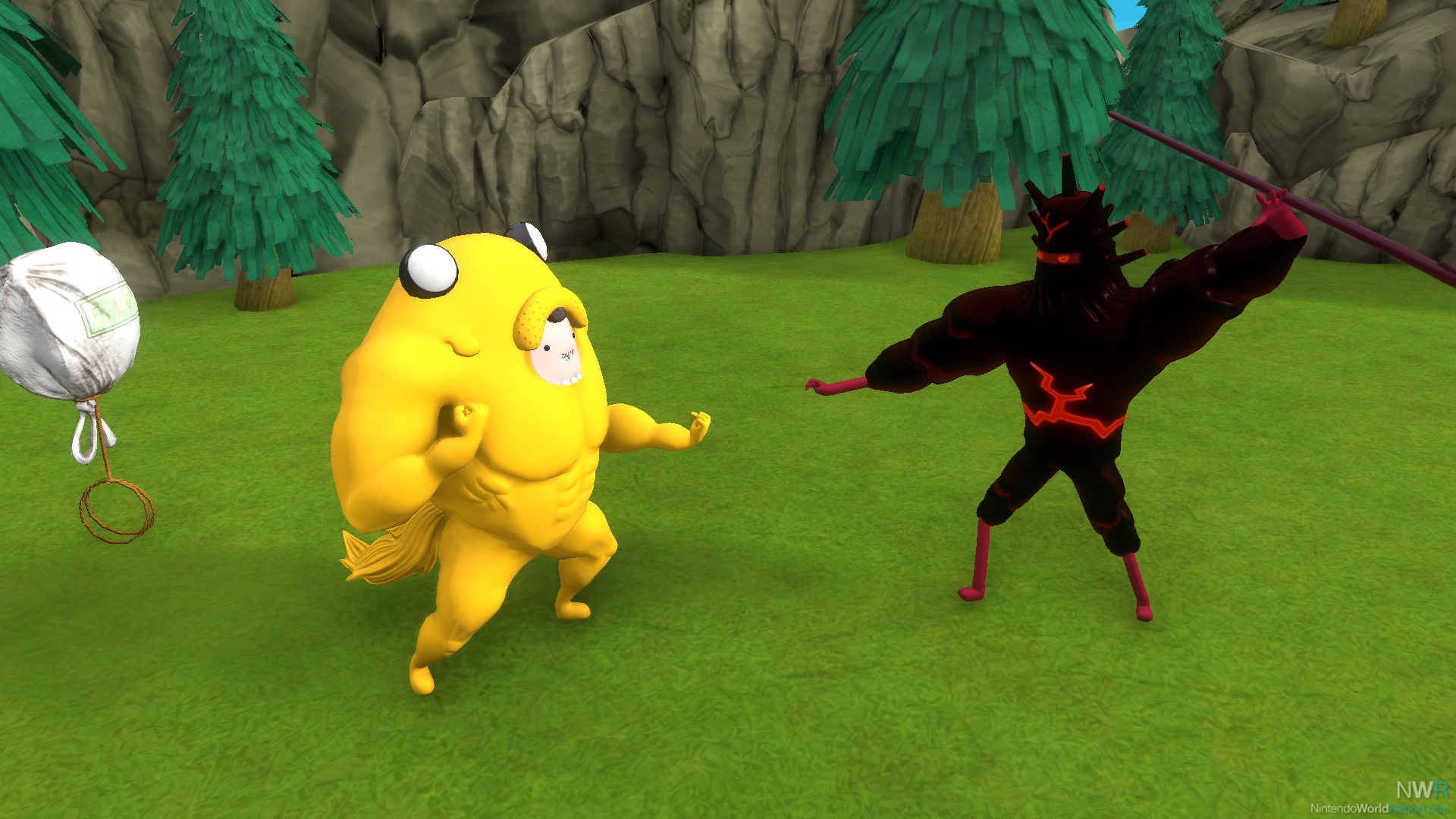 Despite the aforementioned issues, it’s still fun wandering around familiar locations, hearing Finn and Jake banter about everything they’re discovering, and talking with all the characters (Lemongrab and Lumpy Space Princess provide some of the most memorable interactions). However, every now and then, the adventure will shoehorn in some “Combat Time!” sections, in which you have to fight your way out. You can use your sword to hack-and-slash through the enemies, and if you get a high-enough combo, you can unleash a combo-attack involving Jake’s shape-shifting ability. It’s impossible to lose these sections, and your only reward is treasure that has no value outside of storing it in a room inside Finn and Jake’s house. While inoffensive, these sections seem forced, and can be extremely tedious, depending on who you’re facing.

By default, I feel as if this is the best Adventure Time video game so far. It’s not perfect, and it’s a little on the easy side, but as an Adventure Time fan, it made me smile. The game took me just under 10 hours to complete all five cases, so it does feel a bit on the short side, considering the genre. There’s been implications that the game will continue to see support via new downloadable cases post-release, so there’s even more to look forward to.

Looking forward to  this one, but would like to comment onthe first AT game, Hey Ice King..

This game was *great*.  A little on the easy side, very much on the short side, but a whole lot of fun.  Don't touch Explore the Dungeon witha ten foot pole.  Nameless Kingdom is a good *attempt* at a game, but needed a lot more polish before going gold.