If you can just get your robot together than come across to me. 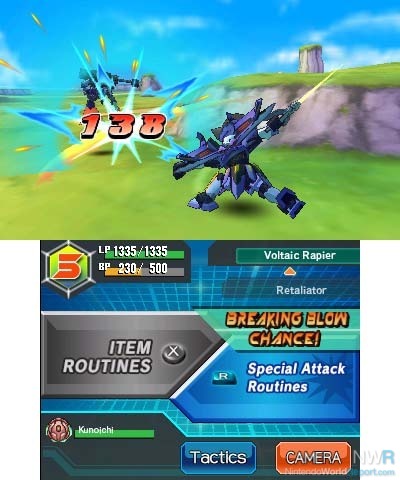 The hallmark of the 3DS's most popular franchise (Pokémon) is that it has a front game that can be wrapped in as little as 25 hours if you know what you're doing, and then it has a radically expanded post game with multiple layers of complexity. In LBX (short for Little Battlers eXperience) Level-5 has stuck to the formula quite closely, but replaced the cute or powerful monsters with miniature robots. The result is a solid foundation that, hopefully, will be built on if some of the Japan-exclusive sequels are localized.

LBX has you controlling a young boy named Van Yamato who is given his first miniature battling robot (an LBX) at the start of the game against his mother's wishes, but who is hoping to use the robot to get closer to his father. Said robot has a piece of technology implanted in it that an evil organization called the New Dawn Raiders is attempting to obtain for their own nefarious purposes, and it's the arms race between your characters and the Raiders that sets up most of the story. Although it's a very basic story in which friendship speeches are common, it works well enough as a plot driver and there are a couple of character turns (in both ways) that I legitimately wasn't expecting. Once the credits roll, though, that's pretty much it for the storyline as the world opens up and expects you to make your own fun, or simply do some minor character building through the nearly 130 side quests. Although the events are mostly fun, some of the late-game unlocking quests require random drops to complete, which will drive you insane or to Google.

LBX originally released in Japan in 2012, and, in that context, the game looks fine. There are some instances of visible polygons in battles, but the robots look fine for the most part, and it's easy to tell your units from the mooks in the 3v3 battle arenas. There are some cutscenes that are basically taken from the companion anime (complete with letterboxing in-game), with the rest in-engine and not really overly impressive. The music and sound effects work well, with no real standout tunes, but nothing that would have you reaching for a podcast. Where you will want to lower the volume is on the voices in battle, as the constant yelling of “ITEM ROUTINE” and calling of attacks became quite grating – but the voice volume setting is all-or-nothing, so you'd miss out on good voice acting outside of it. (The anime cutscenes are subtitled, but there doesn't appear to be an option for dual audio if that's relevant to your interests.) 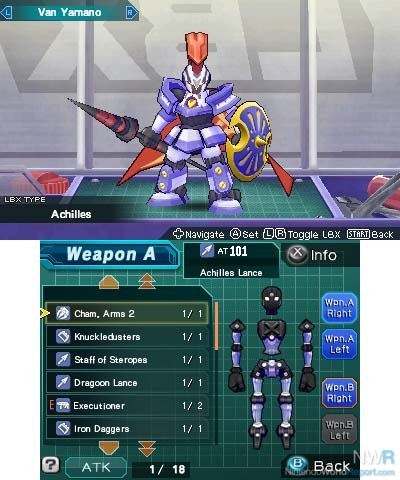 The battles play out in various formats – one knockout to a finish, three out of five, or “unlimited” battles that radically increase the HP/attack stats by removing limiters from the robots. In all battles, you use the Circle Pad to move, the d-pad for weapon or target changing, and the other buttons cover guarding, item use or attacking. You can't go in with guns blazing or drills spinning all the time, however; the bottom of the screen has a “tension” meter that is reduced every time you attack or dash. Once the meter is empty, you have 3-5 seconds of doing nothing but jumping before it refills and you can rejoin the fight. The battles are fun, and you can take different tacks to complete them based on what weapon you're using at the time. The game encourages you to stay battling by way of the robots having a maintenance gauge that lowers slightly if you battle, and a lot if you withdraw, and lowering experience if the gauge is at 0. It's a fair system that encourages you to take chances, especially since every other gauge refills after the fight.

You're going to spend a lot of time customizing robots until you find a battle style that works for you, and there are a lot of options for that. On my playthrough, I went with a polearm/gun attack combo with heavy defense and HP, while my roommate – who was playing the game simultaneously – employed fast gunners with high speed. Even the LBX batteries can be customized through drops from enemies, quest rewards or buying it from the in-game shop, which has created a situation for another player in my area where he's played for over 60 hours and hasn't rolled credits. The customization will shine in the postgame when you've created a set to survive the major difficulty spike right after the credits and take part in ranked battles. Alternatively, you can play a card game to build up some more parts as well.

The multiplayer modes are fun, but limited. The key is in a sticker on the box: “This game supports 2-6 local player play. Please note the title does not support Download Play or Online Play”. That's really going to hurt the incentive to take part in it, because you'd have to have very ideal circumstances (StreetPass meeting, expo, playdate) to do it. There is a Nintendo Network option, but it's only for SpotPass which sends down passwords and quests. (Some of the passwords are in the wild and create incredibly powerful yet affordable armor sets, so if you're trying to beat the game quickly, use them.) In trying the multiplayer, I found that it really favored ranged combat, as my password-infused armor went 1-3 against a gunner of a similar level when I only had polearms equipped. You can change the rules to eliminate time limits and mitigate the advantage somewhat, but it's going to be harder in general if you have a gunner who knows what they're doing. Generally, the fights will play out as Neal and Justin had if you do a three knockdown fight, but one fall to a finish can actually take longer.

The lack of online is probably the biggest thing holding LBX back – though future Japanese 3DS releases have had it, so that would be a definite improvement. If you have any interest in battling, robots, or battling robots, LBX is worth a look, but it's not really hooking me in the way Pokémon does and Yo-Kai Watch later this year has the potential to.


It's a bit of shame that they didn't bring over the latest 3DS game, but I can understand the importance of story continuity and keeping in line with the North American franchise roll out.

I think this is a very content-packed game, battles are incredibly fun, and the customization options are immensely enjoyable. I'm just sad that this game didn't get mentioned for the holiday list of titles folks might have missed out on. Oh, well! :) 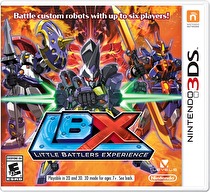