For the uninitiated, Hatsune Miku: Project Mirai DX is a mostly-straightforward rhythm game involving button presses and cute anime girls. For the initiated, it’s the third Western-released game in a series of very good, mostly-straightforward rhythm games involving button presses and cute anime girls. While Mirai DX is just like the two Project Diva games released before on Vita and PS3 in most ways, it manages to do this just a little different – and just a little worse. 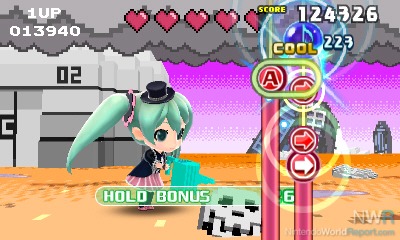 In Mirai, the rhythm game is played across Easy, Normal, and Hard difficulties. You are ranked using letter grades from failure up to S+, and you can use items to make songs harder and easier. In my recent preview of the game, I said the following regarding the difficulty:

“The game nails all of this basic stuff perfectly, but it doesn’t fully nail it for one simple reason: the difficulty ceiling is a little too low. It’s worth noting there is no Extreme difficulty like in the PS3/Vita games, and the Hard difficulty in this game is just as relatively-but-not-too-cripplingly hard as the Hard difficulty in the other Miku games I’ve played. It’s a minor issue for most – maybe even a non-issue – but its lack of presence is missed.” 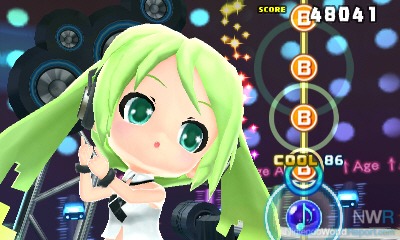 After publishing the preview, we were told by the game’s producer that Mirai is different from the Project Diva games in that the Diva games encourage you to simply finish a song, while the Mirai games are about encouraging total mastery of a given song and completing it perfectly and flawlessly – and that’s why the base difficulty is slightly lower presumably. I don’t feel they did a great job of making it clear in the game itself that this is the main point; I don’t feel most players are going to play it this way who don’t already do so in the Diva games, and having this information did not impact the enjoyment I got out of the game.

The soundtrack of Mirai DX features 48 songs that span various different flavors of J-Pop. Some favorites like Melancholic and The World is Mine are featured, but the song list is rather weak. I played and loved the music in Project Diva f and f 2nd, and in this game, there are only 5-10 memorable songs in the whole lineup (and note that this game has far more songs in it than the Diva titles). None of the songs are bad, but an enormous chunk of them are forgettable and boring. Many of the song structures are so similar they bleed together, and the catchiness in most of the songs doesn’t make up for the fact that many of the tunes are just a slog to get through.

It’s weird to be critical of the gameplay in Mirai DX because a poor Miku game is still a pretty decent rhythm game. Having 5-10 great songs is not so bad, especially since the rhythm game is still as tight and fun as its ever been, and also especially since its difficulty balance is also pretty good if only not as good as previous games in the series. Unfortunately, the problems don’t stop here. 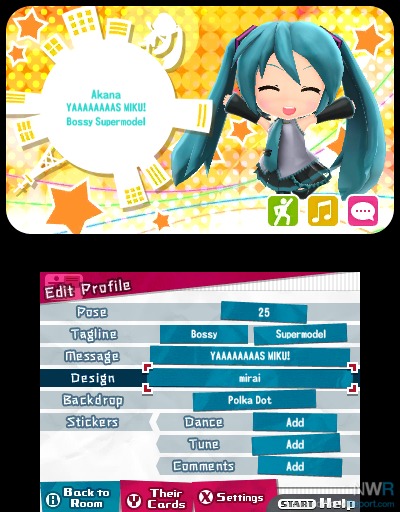 One characteristic all Hatsune Miku games share is that they feature anime teenagers being cute and having fun together via happy, odd music videos that play during songs. Whether you’re into that or not, I always enjoy the presentation of Miku games because they always give me a nice warm feeling. Project Mirai DX changes the art style of the game from realistically proportioned anime characters (in Diva) to a chibi style, and I would argue for the worse.

The chibi Miku characters lose a lot of their personality and replace it for a general robotic cuteness. While this may come down to taste, I just don’t think the chibi art style looks as good as its realistic counterparts. Even worse, the music videos in previous games are (mostly – there are still some left) replaced by Hatsune Miku characters doing basic dance moves over static backgrounds.

Perhaps the largest differentiator between Mirai and other Hatsune Miku games are the extra modes in the game. While other Miku titles push the side content to the side where it usually belongs, Mirai fully incorporates its extra content into the fore. The main menu is a Tamodachi Life-lite game where you pick a Miku character, pick out clothing, give him or her an apartment, decorate it (by buying things via earned in-game currency), and interact with them. 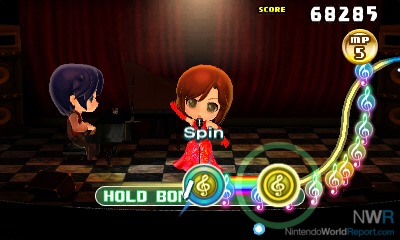 There are some Nintendogs style voice commands like “What time is it?” and “dance,” and you can feed them or do things like watch them interact with objects you placed in their room. You can also have a different room for each character, but they’re so functionally similar that it doesn’t make an enormous difference. Overall, though limited, it’s an interesting way to do a UI and it does successfully break up the song gameplay.

As for other modes, there is Puyo Puyo 39 (a basic version of Puyo Puyo), an extremely slow version of Reversi (called Mikuversi), a basic AR Mode reminiscent of the various AR modes seen around the 3DS and Vita launches (look, it’s Miku dancing in real life!), a custom dance creator where you can decide which dance moves a character uses at what time during a song (it didn’t do much for me), a stamp mode that tracks game achievements, profile cards to share with other players and friends, and the ability to post comments over the music videos in theater mode. There are two or three other small features like an alarm clock, but these are the most substantial ones. All of these features are relatively shallow on their own, but put together at least offer a number of nice, temporary alternatives to song gameplay.

Hatsune Miku: Project Mirai DX is not remotely a bad game. It’s pretty decent, and acts as an overall solid choice for any rhythm game player. Unfortunately, while perfectly serviceable, it’s not nearly as good as the other Western-released series games in any way – other than minor non-rhythm game side content. This means that, should you be a Miku newcomer, you will likely enjoy the game more than I did. However, if you're like me, and you know how good a Hatsune Miku game can be, anything less is a substantial letdown.

If I was to put Osu! Tatakae! Ouendan / Elite Beat Agents at a 10 then Project Mirai definitely feels like a 6.5

I loved the demo, so I can't wait to play the whole game.  And I doubt the lack of an Extreme difficulty will affect me much, given my level of rhythm skills...

I have to agree with this review. The songs aren't necessarily bad, but they're not particularly memorable. I liked maybe 5 or 6 songs tops. The others i was neutral about. I'm not a huge vocaloid fan, but i love rhythm games and i am not new to vocaloid music, but most of the songs I'd never even heard of. Which i thought weird because it claimed that it would have a lot of popular songs. As it is, the few i liked also turned out to be the only ones i knew. The game has very little replayability to me. There's no dlc or anything for it so once I've cleared the songs I've usually no desire to do so again. Even the hang out feature was pretty lackluster. You can feed them and dress them up and decorate the apartment and play minigames with them, but there doesn't seem to be a reason for it. I was hoping for more of a pokemonamie feature or something. Ultimately, for me this game is an okay rhythm game, but i think I'll stick to theatrhythm. 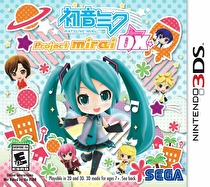