Sonic and friends are back in this Game Boy Advance sequel - and yes, yes, I've already heard that "Cream Cheese" joke.

The original Sonic Advance title was well received, but there were a few complaints about it - mainly being that it didn't seem to be so much about speed anymore, particularly with the amount of special moves that could be performed. And then there was the huge problem with the awkward bonus stages. Sonic Advance 2 is here, and if you bought the original, then you're probably wondering if the sequel has solved these problems.

First off, let me tell you straight out that Sonic Advance 2 is HARD. The difficulty in the overall game has been ramped up a fair bit, and you'll start having trouble passing levels around Music Plant Zone (Zone 3) or Ice Paradise Zone (Zone 4). And keep in mind, this is on the easy setting. Thankfully, there are two new characters who have been created for beginners. Cream the Rabbit and Cheese, her Chao, work together through the game to make it a lot easier for players. If you press B while playing as Cream, Cheese will home in on the nearest enemy and destroy them. This makes boss battles particularly easy. Cream can also fly for a bit, but not nearly as long as Tails can. Nevertheless, this ability helps players reach difficult ledges with ease.

Nonetheless, the game is still difficult, with Dimps having made the bonus stages nearly impossible to access. To reach them, you'll have to collect seven "Special Rings" within a stage, and then reach the end of the stage. You'll also have to do all this without dying, as you lose any Special Rings you collected if you do die. There's also the fact that finding these Special Rings is frustrating - you'll need to take a specific path through the level to collect them all, and there's no indication of which path is the correct one to take. But once you do manage to collect them all, you'll reach the bonus stage, which is much different than the one found in the original Sonic Advance. The stage is set in a free-roaming Mode 7 playing field, and the object is to collect 300 rings within the time limit. The more rings you collect in a row, the more multipliers you'll get for the next rings you earn, making things easier. The only thing you'll have to worry about in the bonus stage is Gamma from Sonic Adventure, and he's pretty easy to dodge. Once you successfully collect enough rings, you'll earn a Chaos Emerald, and these Emeralds now play a large part in unlocking extra features. You'll need to earn all seven for a character to unlock just the Tiny Chao Garden. To unlock everything, you'll need to beat all 7 bonus levels with each character. Now, this wouldn't be so bad if the Bonus Stages weren't so damn hard to access!

Boss battles have also been heavily upped in difficulty, partially due to the fact that they're autoscrolling now. Your character not only has to run to keep up with Robotnik, but once you attack, you'll lose your momentum and need to get your speed up again. Rings appear throughout the battle, but will disappear if you take too long. While it's pretty cool for the first few levels (and does make for some interesting strategy), it gets rather annoying after a while.

Graphics are similar to that of the last game, with the anime-style characters of Sonic Adventure. Levels are clear and easy to see, with the exception of the electronic-styled levels of Techno Base and, to a lesser extent, Death Egg. While they look incredibly cool, you'll need a frontlight to see all the detail due to the frequent use of black and dark green. Characters also have a lot more personality now - when you start a level, they'll be at a starting block doing actions appropriate to themselves - for example, Knuckles waving his fists around, Sonic exercising, preparing to dash off and Cream and Cheese give each other a high five. If you press Up on the Control Pad, you'll also be treated to a little animation appropriate to the character, which is a fun, if useless addition.

Sound is another area in which Sonic Advance performs well (and it would be a crime if it didn't). While nowhere near as good some of the Genesis Sonic games, the music is still quite catchy and enjoyable to listen to. Some tunes however, have been blatantly ripped from the previous game, which is not good. Sound is standard Sonic fare (the trademark ring sound is still in there!), with some clever use of various musical sounds in Music Plant Zone. Control is pretty good overall, with no one but yourself to blame for any mistakes you make. Although, I'm puzzled as to why the ability to look up or down was removed. Control for the 3-D levels is a little floaty, but nothing bad enough to make the levels impossible to beat. The levels themselves are well designed and huge, with a great emphasis on speed. There are still plenty of tricks and traps to make you slip up, and the boss levels are quite tough.

Overall, Sonic Advance 2 is a good game, but incredibly difficult. You certainly won't be breezing through this one, and there are plenty of unlockables to keep you occupied, should you ever manage to do so. Beginners should definitely start out by playing as Cream, and even if you're an expert you should consider it. There's both a single- and multi-cart multiplayer game to give you some added replay value if you're having trouble unlocking everything.

Slick, clear and bright (for the most part), and overall very similar to the last Sonic Advance. Some different locales such as Music Plant provide a refreshing change to the standard Ice and Death Egg levels that have to be included. Characters seem to have a bit more personality, too.

Some really great songs (Music Plant sticks out in particular), along with the fact that there's a different song for each stage makes for some great Sonic listening. Not really Sonic 2 quality, but still quite good music, and you'll be humming some of the tunes for a while. Points off for reusing the Bonus Stage music, though (and a couple of other tracks).

Pretty much the same as Sonic Advance, with the removal of being able to look up or down. Pressing R will also activate a special move if you've gained enough speed. Bonus level controls are a bit floaty when compared to regular levels.

The levels themselves are designed for speed, which is great. It's really cool to pick up enough speed and see Sonic zoom across the ground. But the level design pulls some dirty tricks on you if you do just run all the way through the stage, which takes the fun out of it. The bonus stages are cool, should you ever manage to get to them.

Sure, there's a lot of unlocking to keep you occupied - you can unlock four additional characters, an extra stage, and a sound test. But why is the Chao Garden locked? That's a hindrance, not a bonus. There's also a Time Attack mode to keep you occupied after you do finish the game, not to mention various multiplayer modes.

Sonic Advance 2 is a fantastic game, but the ramped up difficulty level is merciless for the casual gamer. Even if you consider yourself pretty good at platform games, Sonic Advance 2 will most likely show you just how bad you really are. If you can't seem to get those Chaos Emeralds, then you could always play a round of multiplayer with your friends instead. 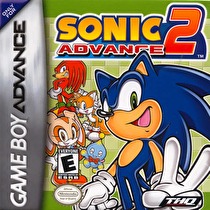