The moment we had to wait way too long for is finally here.

The support from third party developers, in regards to the Wii U, has been far from perfect. A good chunk of mainstream third party titles shun the Wii U outright, while others do only a decent job showcasing themselves on the platform. One of the frantic supporters at the Wii U's launch were Ubisoft and they brought a good slew of titles at the start. They sadly backed off way too fast and only now are they delivering Watch_Dogs for our system of choice. While I am not fully convinced that they really cared to begin with, Watch_Dogs is a decent experience if you are in search for one.

Ubisoft's latest foray in 3D open world experiences brings us to the city of Chicago, where professional hacker Aiden Pearce awaits our arrival. The story of this character has more faults than I am comfortable with. Pearce is a bland character and his entire motive through the game is driven by vengeance. You see, the good Aiden screwed up a bank heist and the people who he was working with killed his niece. You are now on a quest to hold the people behind the deed responsible while keeping others safe in the process. There are interesting twists along the way, but the main character comes off as unlikeable throughout. The other characters do make up for it somewhat as you become genuinely interested what they are up to. 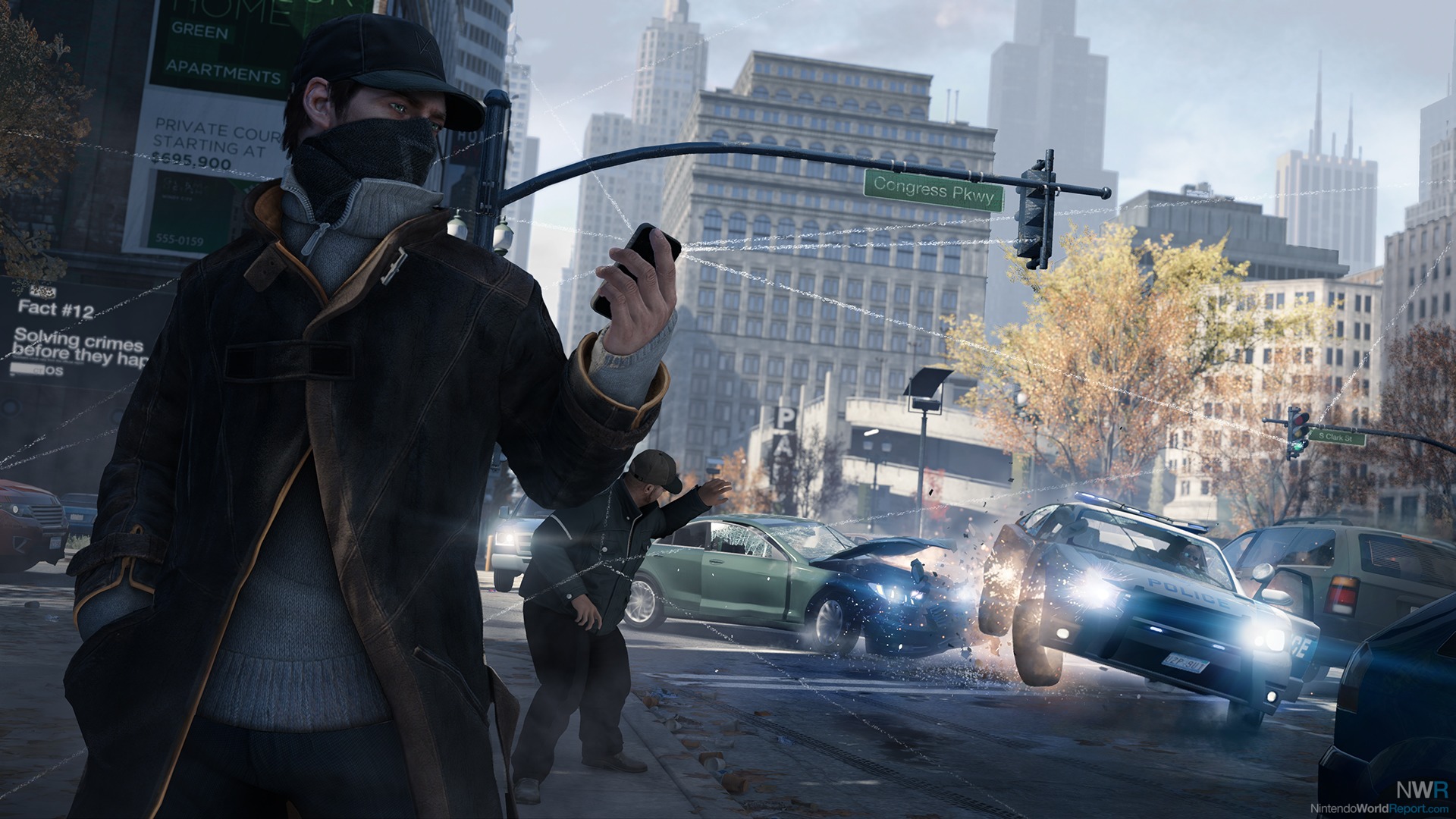 While the story surely needed fixing, I had actually fun playing through the game. Traversing the world by foot or car is enjoyable and there is just tons for you to do. The controls while driving are a bit floaty, but I did get the hang of them over time. The huge map makes way for a huge variety of missions, even ones that are not tied with the story that add extra value. You will have to act with grace during stealth missions, pre-crime intervensions and a variety of minigames. When I had time to do whatever I liked, there was a sense of freedom that made the ride intriguing. I found myself easily sidetracked from the story and started creating my pathways to the end.

The game has also been made fun thanks to your hacking abilities. You can use your phone to hack security cameras, scan other mobile devices or simply learn more about the character at hand. The results are fasinating, but after a while you are kind of hoping for something to levitate it a bit more. You do nothing more than simply tap the Y button and that side of it is dull. The developers could have made this intriguing with some sort of puzzle. 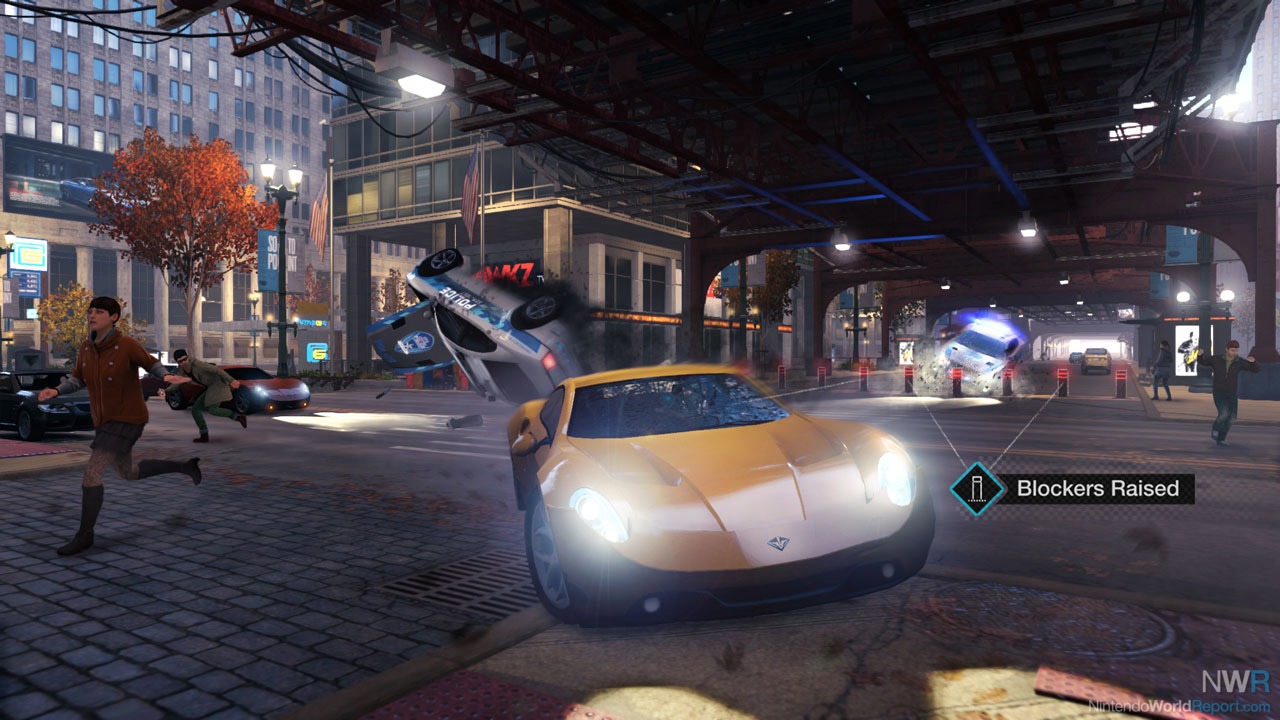 Outside of hacking and driving, Aiden controls really solid. In certain situations, he will need to use a gun to do the talking for him. While I wish there were always ways out of tricky situations, there is a good weight to the guns and the shooting is overly satisfying. It is married to a consistent set of cover mechanics and even a slow down power in the time of need. His abilities and equipment can be upgraded as you progress and this opens new possibilies while you make your way to the end. This will naturally take a while (20 hours to be exact) and that makes the ride never overly boring. I did wish sometimes that there was a bigger variety of missions, but I did enjoy myself nonetheless.

Next to the huge singleplayer campaign, Watch_Dogs are features online multiplayer components. You can duke it out in a variety of challenges like races or a capture the flag mode, where you can enjoy online voice chat while you play. Next to this, you can invade each other's game and harm the progress of other players by tracing their steps carefully. It is inherently fun to toy around with and even more so to see the other player lose his/her mind. As far as specific Wii U features are concerned, Watch_Dogs does nothing really special. You have a map on the Wii U GamePad, which is nice I guess, but that doesn't make up for the six month delay. The fact that you can look at it without pausing gameplay is a nice touch though and it keeps you glued to the screen more. Off-TV Play also included with this version of Watch_Dogs, which is the most basic feature and every Wii U game has it these days. 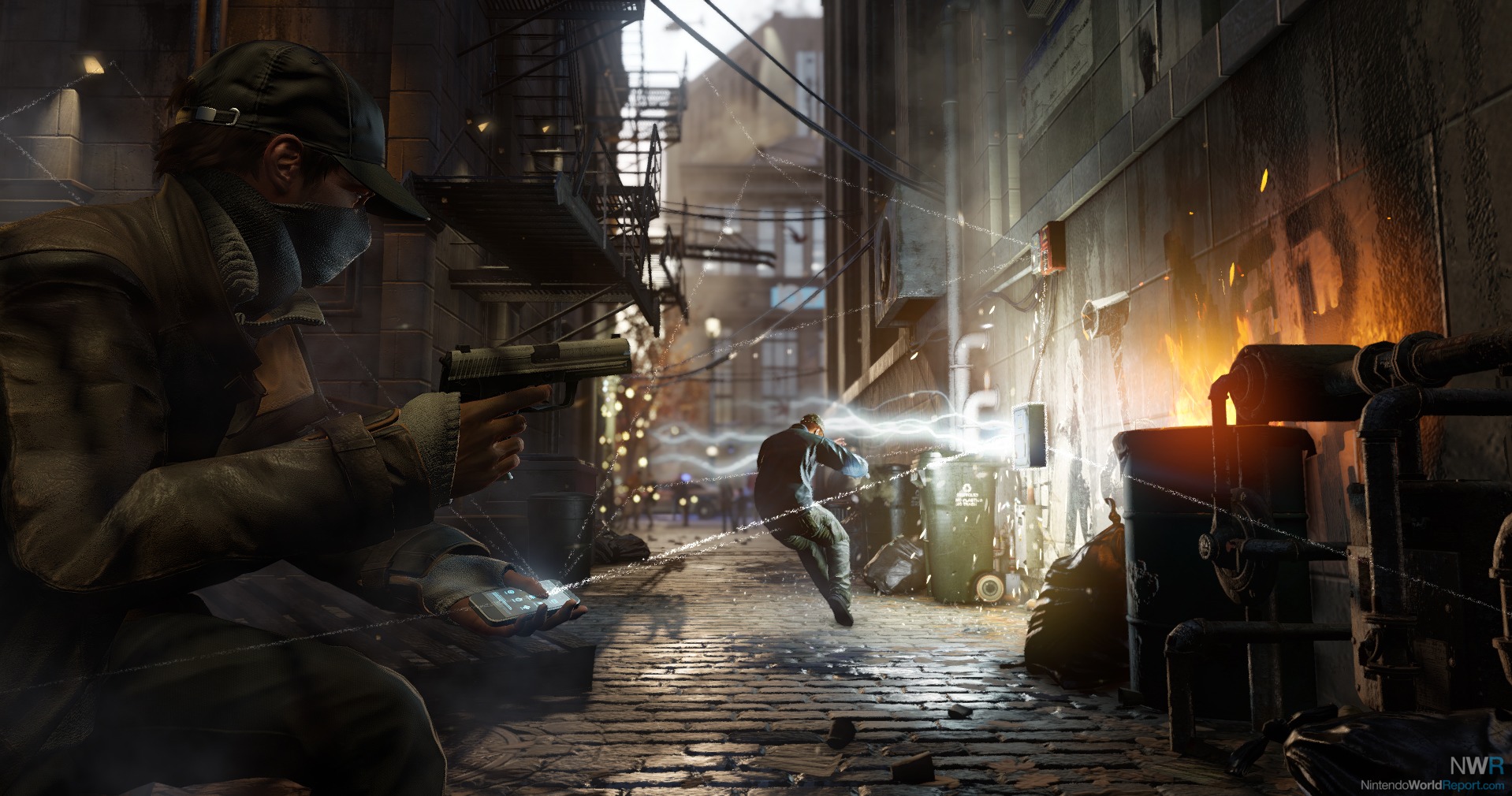 Watch_Dogs looks good on the Wii U. Graphically, it seems to slightly outdo the PS3 and Xbox 360 versions, but not by overly much. The game has a style and flair which is cool to look at and that aspect remains relevant with this version. There are some low resolution textures once in a while and the framerate isn't great, but its something that is manageable. The soundtrack is also enjoyable, though tracks seem to be repeat a bit too much once in a while. Watch_Dogs' sound effects are impressive though and give the notion of a breathing world.

Watch_Dogs on Wii U is a tricky one. The game isn't bad, far from it even, but the six month wait is a bitter pill to shallow. Not much has been added to make it truly different from other systems and the overall presentation could have been slightly better. The large amount of missions, the huge world to traverse and additional functions give this game a solid running time of 20 hours. There are problems here and there, but if you decide to pick it up, you can have potentially fun with it. If you have another console, however, you might Watch_Dogs on that platform instead. The online support of this title on the Wii U seems underwhelming and Ubisoft has no plans to offer the newer DLC packs to Nintendo fans. At the very least, it did come out, and I suppose that is something.

it did come out, and I suppose that is something.

I remember reading in comments on IGN, Game Spot, etc, how this game and Bayonetta were supposedly going to "bring the hard core" gamers to the Wii U. Looks like that was all talk? The only hard core gamer who bought this is the hard core Nintendo fan who never buys non-Nintendo consoles, and the hard core collector who buys everything.

... and the hard core collector who buys everything.

I remember reading in comments on IGN, Game Spot, etc, how this game and Bayonetta were supposedly going to "bring the hard core" gamers to the Wii U. Looks like that was all talk?

They've been saying this for pretty much the last 10 years with the Gamecube, Wii, and now the WiiU.  "YEAH, ____ title is going to be bringing all the hardcores to _____ Nintendo console of choice!"  It's always talk.  Nintendo will never get rid of their family friendly image, and they'll never cater to "hardcores."  The 3rd party companies know this and there will always be a distinct lack of support of content for the console.  I haven't bought Bayonetta 2 or this because like what's been said, waiting for the inevitable price drop or find it used in a few months/years.  I can certainly wait - my backlog is more than enough to keep me entertained for a while.