The Legend of Dark Witch Review

You’ve got your shmup mechanics in my action platformer!

Games inspired by 8-bit classics are becoming increasingly abundant. While Legend of Dark Witch falls into that category, its mechanics make the retro experience feel fresh.

Magic Crystals known as Syega have been stolen. Without the Syega, people have lost their ability to use magic which has become essential to their survival. It is up to Zizou Olympia, the Dark Witch to find the the Syega and save the people from their suffering. 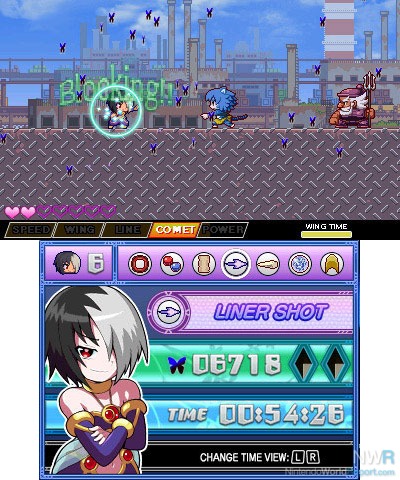 At first glance, The Legend of Dark Witch looks like just another Mega-Man clone. From the start, players can choose from six levels, each with their own elemental theme and boss, and after defeating each boss Zizou gains the boss’ power. There is no denying the Blue Bomber’s influence on this game, however the inclusion of mechanics from a side scrolling shooter make this action platformer unique.

At the bottom of the screen there is a power-up bar. After defeating enemies, Zizou acquires dark colored butterfly like items known as Tres which fill the power-up bar. This will power up Zizou’s speed, give her the ability to float for limited time in the air, and power up her projectiles by increasing the strength and speed of the projectiles. The power-up system feels like it was taken straight from the shoot’em-up Gradius. This mechanic is an added incentive for players to be cautious about damage intake to avoid losing power-ups. and bosses become much more difficult if you lose the power-ups you have acquired.

Tres also work as currency in which players can use to increase their total amount of lives, damage, tres intake and abilities. Each level also contains two hidden Pura Syega Crystals which improve the in-game power-ups. These crystals are difficult to find but the reward is worth replaying levels to find Pura Syega.

The Legend of Dark Witch lives up to its action platformer roots. The platforming is solid and the level design provides an entertaining challenge. Each level has unique mechanics that keep things interesting.

The only issue I had with The Legend of Dark Witch was the game’s difficulty progression. It actually feels like it is most difficult in the beginning and becomes easier as the game goes on. Players start the game with four hearts and three lives. After the first couple of levels, players can increase their damage and lives, thus making the game significantly easier to manage. However, it’s possible to adjust difficulty on the fly between three different difficulty levels making the game if desired.

The Legend of the Dark Witch is a great choice for fans of classic action platformer games. As a fan of the Mega Man series, I found The Legend of the Dark Witch to be a suitable tribute that not only accomplishes the difficult task of living up to the high standards of the game’s muse but also succeeds in iterating on that classic formula in a unique way. The inconsistent difficulty curve could turn some players away, but the overall experience is worth pressing through.

This is a really surprising game in how good it was. I played Easy at first, and then I jumped into Normal. The bosses certainly kicked my butt over and over in Normal, but even after getting game over after game over, I was still earning money to spend on new abilities and upgrades to make myself more powerful. It's also a really inexpensive game, which helps my enjoyment of it!